Counter-culture visionary, William S. Burroughs, was born February 5, 1914, marking this year as his centenary. Celebrating his legacy, Burroughs100.com, launched in January 2014, has listed events, publications and projects dedicated to keeping Burroughs’ insatiable spirit alive. As 2014 draws to a close, the memory of Burroughs as an iconic figure doesn’t go out with a bang or a whimper but as a continuous eerie echo in the cultural psyche. This November, we highlight two events in New York City that explore the enigmatic writer; an insight into his artistic side through the Boo-Hooray art gallery exhibition Cut-Ups (November 7-December 12) and an intimate portrait of the man himself through the re-release of Burroughs: The Movie screening at The Anthology Film Archives (November 13-19).

Burroughs was fascinated with both indulging in and observing the shadowy allure of addiction as famously documented in his semi-biographical book, Junky. Heroin and sex were his vices however he also regarded the nefarious substance of words as an insidious form of control, declaring that “language is a virus.” While he grappled with the former, Burroughs explored an artistic-literary hybrid technique known as “cut-up” to free the mind from what he expressed as “word and image locks.”

Burroughs was first introduced to cut-ups through painter, Brion Gysin, who befriended Burroughs while in Tangiers. Gysin inadvertently discovered the technique while cutting mounts for his watercolors and through to the newspaper that supported them, leaving a scattering of sliced words. Burroughs saw a means of objective liberation in the methodical piecing together of random passages by himself and other writers. This collage style of prose formed Burroughs’ far-out sci-fi trip, The Nova Trilogy, comprised of his novels, The Soft Machine, The Ticket That Exploded and Nova Express.

Now on display at Boo-Hooray, Cut-Ups: Williams S. Burroughs 1914-2014, features hand-edited typescript drafts from The Nova Trilogy along with the mimeographed newsletter, The Burrough and the Sigma Portfolio curated in collaboration with Emory University. A man who eerily was prophetic and tapped into some unseen ether, Burroughs’ The Nova Trilogy and cut-up technique served as a portent to the prevalence of today’s technology and social media. Burroughs stated, “All writing is in fact cut-ups. A collage of words read, heard and overheard.” Curator Johan Kugelburg elaborates, “I think for people to get to see original building blocks from the Nova Trilogy is a bit of a mind-blower. People use versions of the cut-up daily nowadays, in emails and Tumbler and Twitter…[it] is how all of us assemble texts. When Gysin/Burroughs came up with this, it truly did free language from limitations imposed from how we actually use it.” 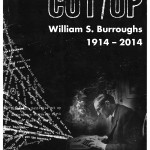 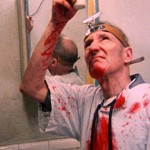 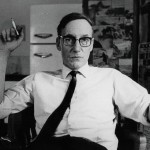 Harvard-educated from a well-to do family and resembling a lanky scarecrow drenched in a salesman’s Sunday best, William S. Burroughs was such an unassuming figure to encapsulate a ballsy counter culture movement of disenchanted youth. His signature creaky voice was the guttural growl, heard around the world and across time, resonating throughout the beat movement of the 50’s/60’s, into punk rock clubs of the late 70’s and even lending itself to the anathematic song, “Just One Fix” by industrial band, Ministry in the 90’s. Burroughs’ seminal novel, Naked Lunch, was a literary mouthpiece for not just a single generation but generations to come. Despite the semi-autobiographical accounts of his life revealed through his novels, namely the title, Junky, Burroughs was a living legend whose real life was either overshadowing or shrouded by enough actual dark mojo, ranging from exile to an ill-fated William Tell act performed on his wife, to feed the myth-making machine.

In 1978, a burgeoning filmmaker by the name of Howard Brookner set out to make a short, intimate portrait of Burroughs for his NYU thesis. A few months later, paired with fellow NYU filmmaker and friend, Jim Jarmusch (of Dead Man fame), the two headed out to meet Burroughs who was visiting Naropa University (renown for its beatnik imprint), in Colorado at the time. Brookner would continue to shoot Burroughs, spanning nearly five years of footage capture, culminating in the piece, Burroughs: The Movie which was first released in 1983. Burroughs was often depicted as a looming and haunting figure however Burroughs: The Movie provides an endearing, raw cut beneath the surface. The film vacillates between highs and lows, at once featuring the tragic figure of Burroughs’ son, William S. Burroughs, Jr. and then the comedic, gory depiction of Burroughs donning scrubs alongside a transvestite nurse for a re-enactment scene from Naked Lunch.

Sadly, Howard Brookner passed away from AIDS in 1989 and with his death; Burroughs: The Movie was thought to have been eventually lost. In 2011, Brookner’s nephew, Aaron Brookner embarked on a far-flung journey of hunting down a missing negative after discovering a treasure trove of footage from the film unearthed from Burroughs’ former residence in the Bowery affectionately termed “the Bunker.” Brookner resumed his uncle’s efforts, explaining, “Howard was always this abstract, mythical, also kinda dark character to me because he died of AIDS-it was a very dark chapter. I guess it bothered me that someone so important to me didn’t really have much of a legacy… I think, in order to take the abstraction of this myth and make it something real, I had to go about gathering up all his work.”

After scouring the globe for the missing negative, Brookner, received a tip that there was a copy at the MoMA, right “beneath his nose.” Upon securing the copy, Brookner launched a successful Kickstarter campaign in 2012 to fund the restoration cost for re-mastering the original film. Although Brookner was a child during the making of the original iteration of his uncle’s film, he still recalls Burroughs as, what writer Stew Meyer termed, the “grandfather who wouldn’t judge you.” Brookner reflects, “My grandmother had this giant Burroughs: The Movie marquee poster signed by Howard and signed by Burroughs in her living room. He was kinda part of the family.”

31 years later, Burroughs: The Movie continues the artist’s legacy, which is still as mordantly clever, pertinent and insightful now as it was during Burroughs’ lifetime. “The room of twenty-somethings, all on drugs, who all think they’re freaks, are not as crazy as the 69 year-old in a three piece suit. He is the embodiment of being yourself,” states Aaron Brookner.

The re-release of the film screened at the New York Film Festival (where it originally debuted in 1983) on October 8th and will be screening at the Film Anthology Archive November 13th – 19th.