Though I’m pretty sure it made my personal ten best list in 2001, Final Fantasy: The Spirits Within was a near-insane gamble for a major studio film. The hook was that it was a movie making the first serious attempt at photo-real CG humans, three years before people would mock the dead eyes of The Polar Express, and one year before the general public got a good look at Gollum. But even without the gimmick, it would have been a longshot: a science-fiction movie primarily of ideas, named after a video game franchise it bore no plot relationship to, and featuring a strong Earth-mother pagan worldview, starring Ming-Na Wen, best known at the time for Street Fighter and the voice of Mulan.

Nowadays, audiences raised on anime would recognize several familiar tropes. But in 2001, it’s unlikely many moviegoers even recognized the debt the space armor suits owed to Kerberos Panzer Cop. Sony must have presumed the ground-breaking visuals would be enough of a hook to get butts in seats. But like so many filmmakers who become enamored of their own digital effects — George Lucas and Robert Rodriguez come to mind — the folks at Square apparently believed their effects were better than the public at large perceived them to be.

Twenty years on, the new 4K Blu-ray just came out. So how has time treated a once ground-breaking film? Perhaps unsurprisingly, not the best. And this comes from an ardent supporter of it at the time. 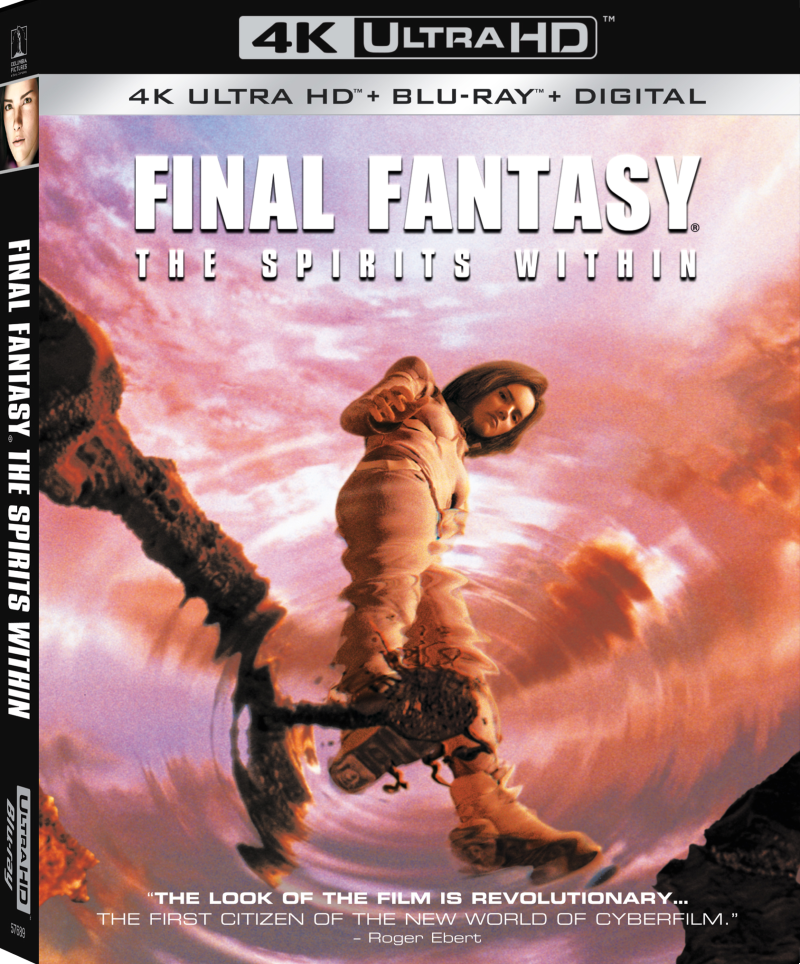 Even though we knew at the time that these weren’t quite photo-real visuals, they were dazzling enough that it didn’t wholly matter. Two decades on, unsurprisingly, the average PlayStation 5 A-list title routinely boasts cinematics that look as good or better. Final Fantasy gave us Alec Baldwin in a Ben Affleck-ish body; Cyberpunk 2077 gives us Keanu Reeves as a near-photo-real CG Keanu Reeves (make no mistake, though: Johnny Silverhand will look dated in another 20 years). Digital animators hadn’t yet mastered the art of showing dust in the air, or even giving depth to the very back layer of an image, so it’s clear sometimes that the furthest plane of animation is flat, and the atmosphere through which every character moves looks as clean as a vacuum. And it’s hard to give weight to digital characters, so the movie very cannily features several scenes of weightlessness.

Much of the action also occurs in low light, as a way to hide details or lack thereof. In 4K, what few bright colors the movie has get muted so as not to bleed. The bottom line? Don’t watch this in daylight, or any time your TV screen might reflect anything. The newly revealed levels and shades can only really be appreciated in darkness.

Seven years before WALL-E, Dr. Aki Ross (Ming-Na Wen) was walking through the ruins of a desolate Earth looking for one last green plant. Her plan for it was just a little more complicated, though. Something about collecting seven spirits to create a harmonic wave that would counter the one created by mostly invisible, hostile “Phantoms” that invaded the Earth and left it bare. The Phantoms, with their translucent skins and internal organs, remain the film’s most impressive effect. As scary dead alien souls go, they’d make great propaganda for L. Ron Hubbard.

But not everyone has the patience to wait around for harmonic waves. James Woods, voicing a slicked-hair younger military man who nowadays plays like a proto-Ben Shapiro, wants to shoot all the alien ghosts with a giant space gun. This is one aspect of the movie that has aged well — Woods as right-wing lunatic. Baldwin as tolerant progressive, maybe not so much. What’s really weird, though, is hearing Steve Buscemi’s voice come out of a generic young dude. He doesn’t say “How do you do, fellow kids?”, but he’s thinking it.

The tension of the story, therefore, goes like this: can Aki find all the spirits and make a counter-wave before the space NRA fire their giant cannon that will probably make things worse and even maybe destroy the world? Making things tougher are all the Phantoms on Earth, who tend to rip people’s souls out of their bodies and devour them. But Aki’s dreams suggest something else at work…

In 2001, when the story slowed down, the visuals were impressive enough to soak in, and the action scenes were reasonably competitive with those of bigger movies still not using CG on a large scale. Viewed now, they make you want to pick up a joystick and control the action a little more. It looks like a game; why can’t we play it like one?

Perhaps that’s because the action frequently feels obligatory. The Spirits Within would work better as a short story, as its strength is ideas. In that sense, it’s more classic sci-fi than the average blockbuster. But while the end product may have been a huge gamble regardless, at least an attempt was made to add more crowd-pleasing jeopardy and battles for the multiplex crowd. It stands today as more of a curio than a classic, but animation and sci-fi historians should find much to study from a film evolution standpoint.

And speaking of which, the extras carry over not just from the previous Blu-ray, but the first DVD. Watch really lo-res fake outtakes, and a fake behind-the-scenes shot of Aki coming out of the screen and interacting with real and CG cast and crew. Watch the techniques that would later be refined by Peter Jackson and James Cameron to shoot on a mo-cap stage, explained as if for the first time. See test footage of a CG mother and daughter arguing, designed to prove that CG characters can silently convey emotion through body language and facial expressions. Listen to two archival, very technical commentary tracks, if you’re inclined. Understanding that their film was mostly perceived as a technical exercise, Sony loaded it with supplements expanding on those aspects from the very beginning.

Now, if we could do something about the horrible, outdated Blu-ray menu that makes the extras as hard to locate as the Gaia spirit, that could be a useful upgrade.