Marvel Studios’ Captain America: The Winter Soldier hits movie theaters nationwide today.  While the Star-Spangled Hero has had decades worth of stories told about his exploits, not all of those tales can or should be translated to the silver screen. 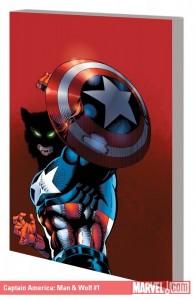 The 1990s were a weird decade.  Jesse Spano was getting hooked on caffeine pills on Saved by the Bell,  Oprah Winfrey was wheeling out the amount of fat she’d lost in a Radio Flyer red wagon on live TV, and Captain America was off fighting for liberty as a werewolf.  While battling Nightshade, a villainess who had previously achieved notoriety for leading a group of Femizons (don’t act like that’s weird—who hasn’t led a group of Femizons?), Captain America was injected with a chemical concoction designed to turn a Massachusetts town into werewolves.  Despite only being able to communicate in guttural grunts and howls, Cap still wanted to do his duty as a true Super Soldier patriot.  Also, Wolverine and nearly every Marvel Universe character who even vaguely resembled a wolf guest-starred in the story, because comics.  (Captain America #402-408, “Man and Wolf,” 1992)
“Breaking Cap” 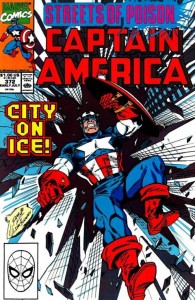 Since Walter White’s antics had not yet appeared on television at the time of the story’s publication, most of America’s youths had not yet been exposed to the ravages of methamphetamine use.  Thankfully, they had the creators at Marvel, who crafted a Very Special Issue about how meth ruins lives.  The Star-Spangled Avenger accidentally succumbed to methamphetamine after an explosion while roughing up some drug pushers.  The meth bonds to the Super Soldier serum coursing through Cap’s veins, turning him into every hopped-up druggie stereotype your mom ever got chain emails about.  Cranked-Up Cap becomes increasingly aggressive, taunts drug dealers, fights allies who are trying to help him, and grows a 5 o’clock Don Johnson shadow.  Luckily, fellow Avenger Hank Pym whips up some science and removes the meth from Cap’s system.  Just like in real life.  (Captain America #372-378, “Streets of Poison,” 1990)
F is for France 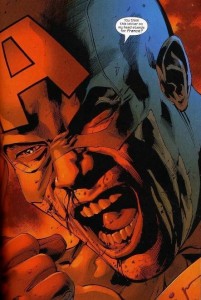 In the series The Ultimates, which features an alternate reality version of the Avengers, Captain America and the Ultimates are facing off against an alien invasion.  As Captain America squares off with the alien’s leader, the good Captain becomes enraged when the alien calls for Cap’s surrender.  Captain America does his best impression of Russell Crowe in a hotel room, beating the alien and eventually slicing him in two with his shield.  Cap points to the “A” on his uniform’s skullcap and asks, “Do you think this letter on my head stands for France?”  Jingoism at its finest!  (The Ultimates #11, Vol. 1, 2003)
The Hate-Monger 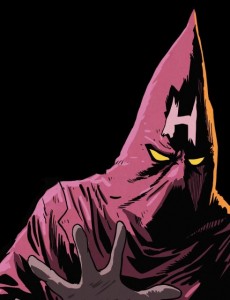 Hate-mongering is rough work.  While many people can sow seeds of discord and racism, it takes a true professional to spread that hatred on a global scale.  Enter The Hate-Monger.  This purple-hooded (mind out of gutter) villain used his Hate ray or H-ray (for, y’know, clarity) to inculcate feelings of fear, hatred, and hopelessness in his victims.  The Hate-Monger’s goal was to eventually purge the Earth of races he found inferior.  This is unsurprising, as it turns out that HM was actually a cloned version of Adolf Hitler, who, it appears, was less-than-forthcoming with Eva Braun and that suicide pact thing.  While he has been beaten by Captain America again and again, The Hate-Monger has been resurrected by writers needing an easy plot device.  (The Hate-Monger first appeared in Fantastic Four #21, 1963.  Captain America has fought different iterations of The Hate-Monger, two instances being Captain America #211-212, 227-228, Vol. 1, 1977 and 1978, and Captain America #25-27, 45-48, Vol. 3, 2000 and 2001.)
Iron Cap 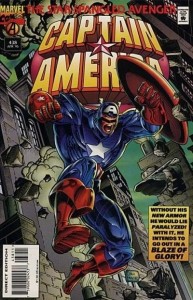 No, I’m not talking about the Iron Patriot armor featured in Iron Man 3.  The Super Soldier serum in Captain America’s veins began to break down, leaving Steve Rogers paralyzed.  With the help of Tony Stark’s techno-wizardry, Cap was able to continue fighting for the American way using an exoskeleton right out of a crappy episode of M.A.N.T.I.S.  The armor allowed Cap to fly, as well as came equipped with missiles and beams that caused vertigo.  The appearance of the armor made Cap appear to be a more patriotic version of NFL SuperPro, complete with shoulder pads that seemed to come prerequisite with every 1990’s superhero costume.  Luckily, Cap got better and was no longer afflicted with the plague of that armor.  (Captain America #425-434, “Fighting Chance,” 1994)