It’s Independence Day weekend in the United States of America! For you, maybe that means BBQs and fireworks, parades and family. Or maybe it means getting reacquainted with pop culture’s tail-kickin’ patriotic superheroes and get your Red, White, and Blue on! We’re going with that. To help with your democratic consumption of all things American and pop-culture, I’ve assembled a list of superheroes who love America, apple pie, and the electoral college (probably).

First, leaving Captain America off a list highlighting kickass patriotic superheroes would be like neglecting to put Abraham Lincoln off an MMA presidential fighters edition roll-sheet. It just ain’t cricket. The Star-Spangled Man with a Plan isn’t a character who spouts off jingoistic one-liners and will follow any American official with the slightest shred of authority. What has made Steve Rogers, the man behind the mask, such an enduring character since his inception in 1941 is that he genuinely believes in the idea of the United States of America and the fair governance of her people. Rogers is hardly a naive ideologue, though. He is aware that humans are fallible and will trip along the way, but he marries that sensibility with an unshakable belief in what the USA can be. Beyond his super-soldier’ed muscles and his Old Glory-modeled costume, what really makes Cap special is his willingness to do the right thing and his dedication to the dream that is America. 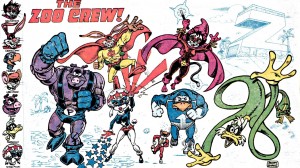 Yes, there was (is? Not sure if she’s dead) a character named Yankee Poodle, and she was a member of Captain Carrot’s Amazing Zoo Crew. Rova Barkitt was a gossip columnist on a planet populated by other sentient animals, so of course her last name couldn’t be Jones or Michaels. It had to be Barkitt. Because dogs. Barkitt was hit by a meteor fragment which, instead of killing her and giving someone the unenviable job of telling her next of kennel, gave her superpowers, magnetic and repulsion powers that manifested physically in the forms of stars and stripes. So naturally Barkitt decided to become a patriotic-themed superhero. She makes this list partly because of that.

I sorta-kinda fondly remember the Zoo Crew, and I used to own some of the group’s original stories. And while I was about to lament Barkitt’s laziness in creating her alter ego, really, she’s pretty brilliant. Working in entertainment, she knows that the public is more likely to latch onto a brand that stirs deep emotions and is easy to remember. Patriotism + a sledgehammer’s subtlety of a nod to the song “Yankee Doodle” = immediate brand recognition. Well done and a tip of the hat, Ms. Barkitt.

Few cartoon or comic book characters can be said to be as patriotic or love the Red, White, and Blue more than G.I. Joe. I mean, it says “A Real American Hero” right in the title. Okay, maybe G.I. Joe is, on the surface, a rip-off of Marvel’s SHIELD and perhaps Cobra, the ruthless terrorist organization determined to rule the world that the Joes are always thwarting, is a thin-version of Hydra, but few fictional cartoon super-groups can boast love of country like G.I. Joe can. And, as second-in-command to his teammates and field commander, he barks out orders with a smoothness that would make President Reagan weep tears of joy. Doubt his love of the USA? In G.I. Joe: The Movie, the 1987 cartoon movie, Duke took one of Serpentor’s poison snake spears (don’t ask) in the heart for both America and the life of his brother. (He got better). Yo, Joe, y’all. Duke is King Motherfucker of Gettin’ Shit Done for Democracy.

Why might you not know who the Shield is? Thank Marvel’s head Avenger for the general public’s lack of knowledge of the stable of characters who have all carried the Shield moniker. Captain America appeared in Timely (now Marvel) Comics’ Captain America Comics #1 in the March of 1941. However, a little over a year earlier in January 1940, MLJ (now Archie) Comics debuted the Shield in Pep Comics #1. While both characters have differing origins, they have similar superpowers and use American flag iconography in their costumes. Whether Cap’s hallmark trappings were yanked from the Shield’s has been debated by comic book scholars and folks who lived during the hey-day of both characters. With Captain America’s popularity taking off, however, the Shield’s fan-base waned. While the character has appeared several times since, as late as this year, the Shield never quite gained the popularity or public renown as the leader of the Avengers.

What? Not all stories have happy endings. Wah.

We’re not talking about the personification of the United States government that points at passers-by from posters, encouraging folks to join the Army. This comic book version of Uncle Sam is thought to be the personification of the heart and soul of the United States, and there have been many, many, many different versions to appear, first in Quality Comics and later DC Comics. (One version’s comic book origins involve the Founding Fathers and the occult, so that kinda kicks ass, you gotta admit.) Aside from the guy’s powers, which have included super-strength, clairvoyance, invulnerability, and size manipulation, all you need to know about Uncle Sam is that he’s all about the U.S. of A. and believes in the dignity of her people.