The Avengers: Age of Ultron is now raking in the cash in theaters and has been met with largely-positive reviews. However, some folks, myself included, have had some varying degrees of issues with certain aspects of the film, which I won’t retread here. Whatever my handful of concerns with AOU, I admit that it did a plethora of things right that made me want to give it a second viewing. Here are just seven aspects of AOU with which director Joss Whedon stuck the landing. Caution: Ahead, there be spoilers for AOU. 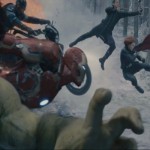 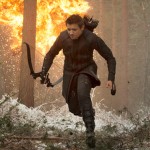 Although I still contend that huge swaths of AOU felt overly busy and bloated, the opening sequence highlighting the assembled Avengers raiding a Hydra base in search of Loki’s scepter was expertly choreographed. We got to marvel at many of the Avengers using their abilities to work together, particularly Thor and Captain America. And while many action flicks since The Matrix have had a tendency to overuse the slow-motion shooting “bullet time” style ad nauseum, director Joss Whedon used it just enough to make the characters feel like they were leaping off the screen. Ang Lee, take note: This is how to properly incorporate comic book storytelling techniques in a superhero film.

My Avengers Want to Party All the Time

One thing that the comic book Avengers series do a phenomenal job at is showcasing why these folks would choose to work together. While, on the surface, it’s to stave off the threats of evil that plague the world, they could easily do that on their own if they chose to do so. However, as the post-battle party scene highlights in the beginning of the film, these guys and gals seem to genuinely like one another. While it is true that they might clash on occasion, what brothers and sisters don’t? The friendly verbal jabbing that they do to one another, particularly during their attempts to lift Thor’s hammer, make you believe that these sometimes-dysfunctional heroes could be friends.

The Menace of Ultron

Much has been rightly made about James Spader’s silky performance as Tony Stark and Bruce Banner’s AI creation run amok, and rightly so. Spader is more than manages to bring the bombast and subtle hiss of Ultron as the scene allows, making viewers believe in the robot as a credible threat. There’s a reason that Ultron is considered one of the Avengers’ most deadly adversaries in the comics, and Spader removes all doubt that he’s genuinely a force to be reckoned with. From his initial birth and meeting with a post-party group of do-gooders to his oscillating emotions that make him seem more than unbalanced, Ultron presents a different kind of threat than did Loki in the first film, which, as much as I love the God of Mischief, is a nice change of pace.

While we didn’t get to see much of the fleet-footed mutant, er, “wonder” on the screen, the look, cockiness, and just-below-the-surface anger of Quicksilver were perfectly on display in AOU. Although I preferred Evan Peters turn as the hero in X-Men: Days of Future Past, Aaron Taylor-Johnson captured Quicksilver’s swagger as he pummeled Avenger and Ultron-drone alike, with a flair and aloofness befitting Marvel’s premiere sour-ass answer to DC’s The Flash. In addition, his turn as a quasi-villain in AOU as an ally of Ultron to siding with Earth’s Mightiest Heroes is a sly nod to Quicksilver’s character history as a member of the mutant terrorist Magneto’s Brotherhood of Evil Mutants. Also, that Eastern bloc accent was spot-on. 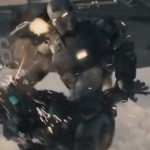 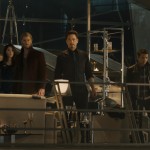 Under Marvel Studios head Kevin Feige’s watch, the Marvel Cinematic Universe truly feels like a shared universe, incorporating the same feeling that comic book readers get when reading a funny book. Marvel sells the idea that these folks, from Cap to Maria Hill to War Machine, occupy the same world. While the other films, particularly 2012’s The Avengers, do a bang-up job conveying this notion, the sheer number of characters in AOU push that conceit to the fore. Although the film is sometimes uneven in balancing all of those Avengers and villains, I would be lying if I didn’t confess that my nerd heart sang seeing Captain America: The Winter Soldier’s Falcon fighting alongside Thor and Iron Man. And we got a peek of the wider universe, with mentions of vibranium (which makes up Cap’s shield), Ulysses Klae, and Baron Strucker.

In the comic book series, Captain America has been the most frequent leader of the assembled Avengers and, while the original installment hinted at his acumen as commander, AOU really pushes that idea front-and-center. From being the moral compass of the team who will call any of his fellow Avengers out on their bullshit (see Tony Stark) to directing Hawkeye and the gang during the climactic clash with Ultron, Steve Rogers shows why he is an integral part of any Avengers assemblage. And credit to Joss Whedon: That’s not an easy feat to manage in a Marvel Cinematic Universe in which Iron Man is so often the flash that draws the viewers’ eyes.

No list of kickass moments from AOU would complete without a mention of that battle royale brouhaha between the Hulk and Tony Stark in his Iron Man Hulkbuster suit (nicknamed Veronica) in the streets of a South African city. Not only does the CGI do a phenomenal job at selling the weight and heft of the punches the golden and jade goliaths hurl at one another, but there’s a sorrow that accompanies the slugfest, as we know that the damage that the Hulk inflicts will crush Bruce Banner—which it does, in spades. Take note, action film directors: This is how a fight can pack in the fun and the emotional punch.

The Avengers: Age of Ultron is in theaters nationwide. Be sure to check out our review!