For a loner, Batman has one of the most extended families in comics. From Catwoman to Nightwing to James Gordon, Bruce Wayne has an umbrella of allies and friends to aid him in his war on crime. But what happens when those allies are picked off one by one? What happens when the Dark Knight Detective is marginalized and is slowly cut off from those who love, respect, and aid him in his mission? That’s what writer Tom King has slowly been building up to in his run on Batman, and that comes to a head in issue #59, written by King, drawn by Mikel Janin, colored by Jordie Bellaire, and lettered by Clayton Cowles. 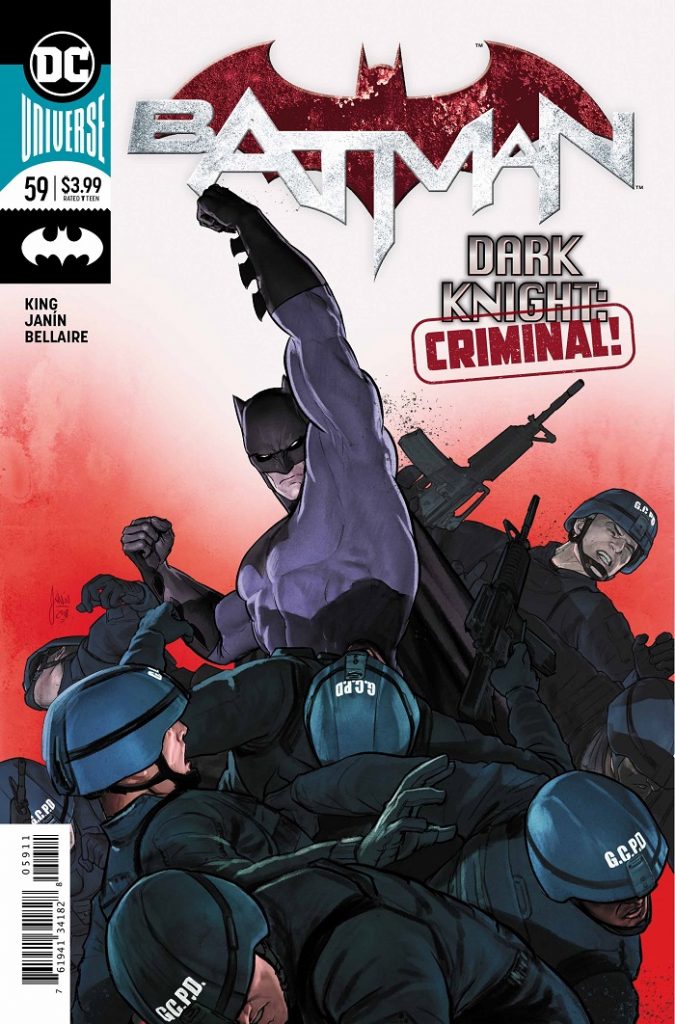 Following up on last issue, Penguin reveals to Batman that Bane is not catatonic as he’s been led to believe. Instead, he’s been working from Arkham Asylum, pulling the strings and keeping Batman constantly scrambling to keep up. From framing Mr. Freeze for murder to breaking up Catwoman and Bruce to having Nightwing—Batman’s son—shot, Bane has been behind it all. Realizing that Penguin may be telling the truth, Bruce storms Arkham, dispensing with police in his way and brutally beating a Bane who pretends to be helpless with the mind of a child. What happens toward the end of the issue is something Batman will have a difficult road walking back.

King has shown in his nearly 60-issue run on Batman that he knows what makes the Caped Crusader tick and, unfortunately for Bruce, it’s that his biggest Achilles heel is his connection to his loved ones. While he is sometimes too stubborn for his own good, pushing people away, Batman loves his family deeply. Bane knows this and has devised a way to pick off the members of that web systematically, because a marginalized Bruce is one who makes mistakes. King creates a situation that leaves all involved—readers and participants—with lumps in their throats, hoping for an outcome that feels all too inevitable. 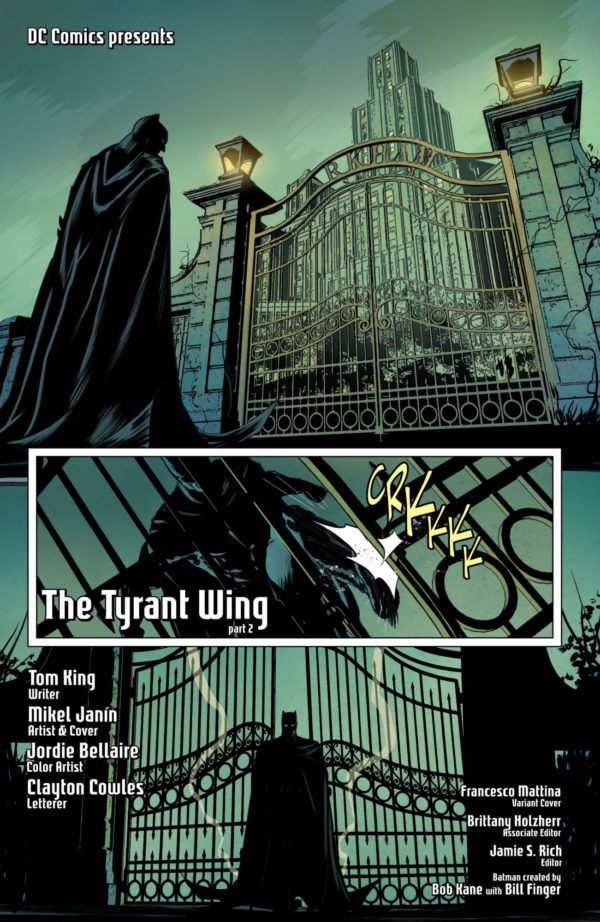 The entire issue is fraught with intensity, which is no small part to Janin’s linework. The artist, who has been drawing for the Batman universe off and on for years, is at the top of his game in this installment, making readers hold their breaths the entire time. Bruce is filled with fury, and rightly so, and his body language juxtaposes perfectly with the wretched form a deceitful Bane as he feigns being pitiful and mentally broken. While Batman throws his fists on Bane, as blows repeat time and again, we just know that a breaking point is building, that a threshold is about to be reached, and we’re just waiting for the other shoe to drop. Janin keeps that tension pervasive the entire time, which is a feat in any story, even when we have a hint of the tragedy that will follow. 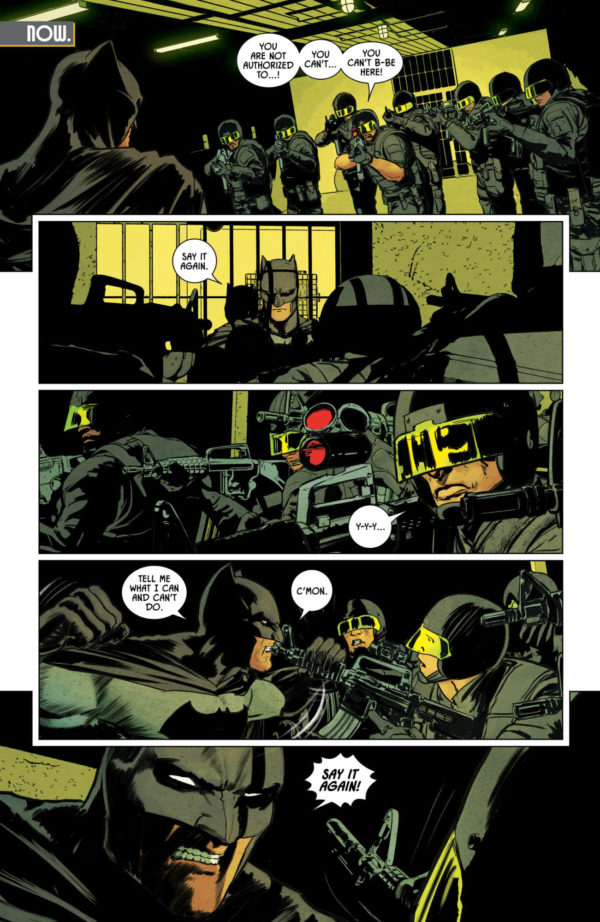 Bellaire is a gift to the industry, and Batman #59 is no exception. She has an innate ability to know how to build mood with her pallet, using darks and lights when necessary to match the story being constructed. As Bruce enters Arkham Asylum, the shadows Bellaire are especially heavy, matching his stormy mood perfectly; however, the brightness she employs while Bruce interrogates Bane parallels precisely with the clarity that Bruce has in his certitude of mission. Cowles’ lettering is, as always, spot-on, again in the interrogation scene. Bruce’s dialogue becomes increasingly rendered scratchy and erratic, while Bane’s lines appear on the page increasingly pathetic as he play-acts incapable. 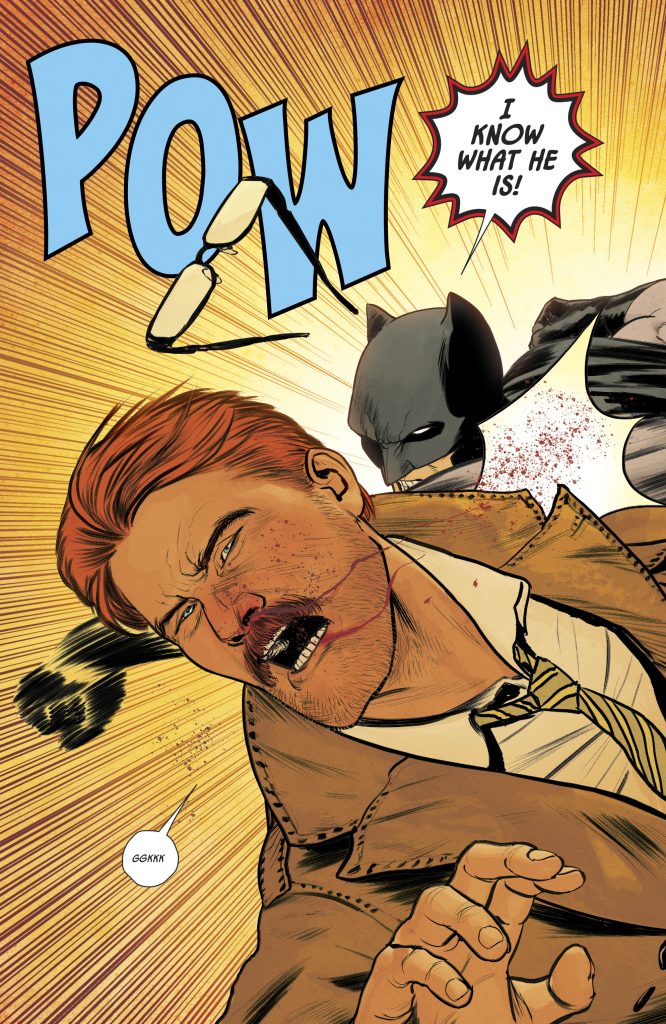 A Batman tale is never better than when the character is at his lowest valley because that’s when we can cheer him on as he climbs out of the darkness. And with Batman #59, King, Janin, Bellaire, and Clowes are setting up for the Dark Knight for a fall that will let us marvel as he gets back up.

Batman #59 is on sale now from DC Comics.

Caught between Batman and his unseen enemy, the Penguin has to think on his feet to avoid being taken down by either side. If he chooses one way, he goes to jail; if he chooses the other, he ends up dead. Then again, the choice seems obvious. Is Batman ready for a new kind of avian sidekick?

A Marginalized Dark Knight Is at the End of His Rope in BATMAN #59
9.5Overall Score
Reader Rating: (0 Votes)
0.0