FreakSugar contributor Tim Avers is back to share some thoughts on the superhero/horror film Brightburn.

Just under a year ago James Gunn vanished from Hall H of San Diego Comic-Con where he was to publicly introduce his cousin’s, brother’s, and director David Yarovesky’s super-powered horror film Brightburn.

Disney, caving to public pressure from a right-wing internet troll, had unceremoniously dumped Gunn from Guardians of the Galaxy 3, a massive franchise that Gunn essentially made the whole world care about.

Gunn’s decorum paid off and he’d eventually be restored, thanks in large part to support from fellow Guardian’s alum Dave Bautista, not only as Guardians 3 writer but director as well. But it’s Brightburn, an odd, independent antihero film that would give James Gunn a Disney/Warner/Sony trifecta. Now that Brightburn has hit home video, it’s time to reflect on exactly how menacing it really is.

Brightburn is a triumph – a true antihero origin story that pulls zero punches and takes the audience right up to the edge again and again. I hate to compare it to anything, but of course I will – and it’s an unlikely comparison at least. 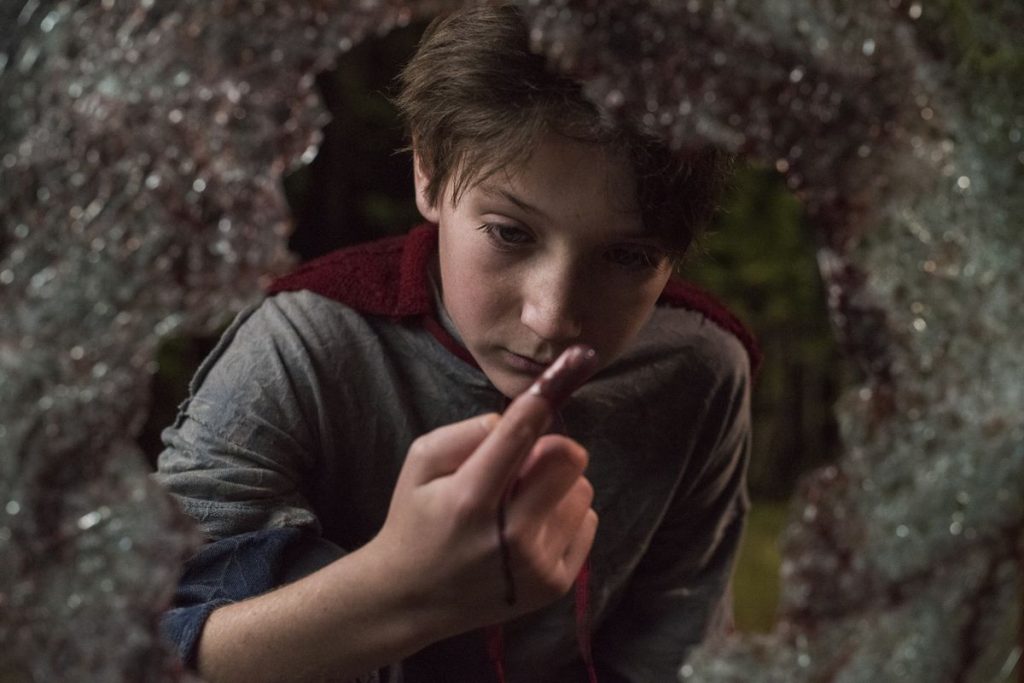 Jackson A. Dunn as Brandon

2003’s Bad Santa gave Terry Zwigoff’s titular character license to let the brilliant Billy Bob Thornton, again and again, debase and degrade himself at every turn. Just when you thought there might be the least little bit of hope for a turnaround, Billy Bob would defile himself in a new and previously unimaginable way. And that’s essentially the opportunity David Yarovesky gives actor Jackson A. Dunn.

Young Dunn is helped by his resemblance to the late and great Harry Dean Stanton to sort of stumble in, go from 60 to 0 on the emotional scale, and then explode with complete dead-eyed fury.

After an emotive series of Batman films where the Caped Crusader in essence scraps his most interesting qualities for a morose, boring climb up the Bat Umbilical Cord into savior Martha’s waiting womb, Brightburn welcomes a monster to the screen who revels in his total detachment from relatability. He is truly superhuman and an undeniable ubermensch.

Along the way, Dunn’s Brandon is completely failed by a cast of do-gooders incessantly striking out at every at bat – and it’s absolutely metal. Brandon is the kid without a single friend, he’s rejected by “the girl,” his uncle subconsciously tries to empathize by arming him with a rifle, his aunt/therapist’s professional ethics totally backfire, and ultimately his parents literally betray him for the “greater good.” In the extras, it’s delightful to see how clearly these concepts were understood by the cast – especially Elizabeth Banks, who portrays Brandon’s mother. Literally the only thing we are missing is some low-rumbling bass, scratchy cavernous vocals, and staccato snare.

Heartwarming, high-stakes superhero antics are literally a dollar a dozen these days and Brightburn is a much needed antidote.