Throughout his nearly 25-year publication history, Hellboy–the gruff, rough-and-tumble demon with a heart of gold and a fist of doom–has contended with a wide variety of ghosts and goblins that inhabit the realms of our world and beyond. So, then, it’s appropriate that, with Christmas just around the corner, the demon on the side of light would butt horns with the holiday’s most famous supernatural beast, Santa Claus’ sometimes companion Krampus.

This Wednesday, Hellboy: Krampusnacht, written by Mike Mignola with Adam Hughes on art, hits newsstands, showing just what happens when two of the world’s most famous demons collide. Mr. Hughes spoke with us recently about the conceit of Hellboy: Krampusnacht, working with Mike Mignola, and the research process going into bringing Krampus to life. 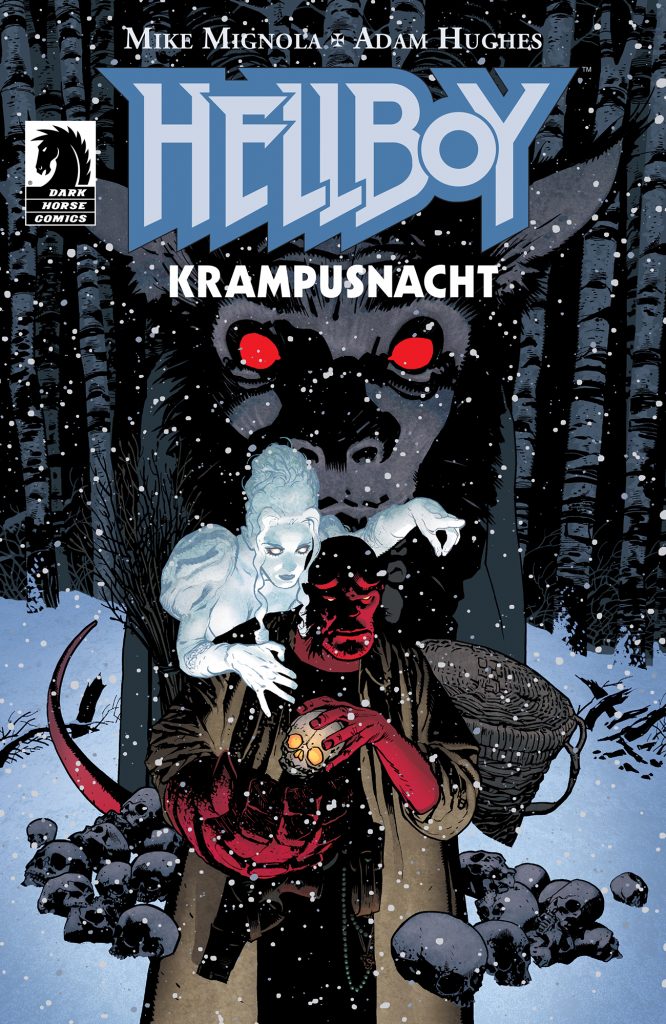 FreakSugar: For folks considering picking up the one-shot, what is the conceit of Hellboy: Krampusnacht?

Adam Hughes: Earth’s Greatest Paranormal Investigator has dinner with Earth’s Favorite Christmas Demon. I mean, come ON.  It sells itself.

FS: How did you become involved with Hellboy: Krampusnacht?

AH: Mike Mignola has a Wheel of Art that he spins, with the names of different artists on it. Duncan Fegredo scratched in my name as a joke and HA HA the joke’s on Mike.

I kid!  Mike asked me to work with him when I was on Betty & Veronica, and I said “YES!” as any Mignola fan should! 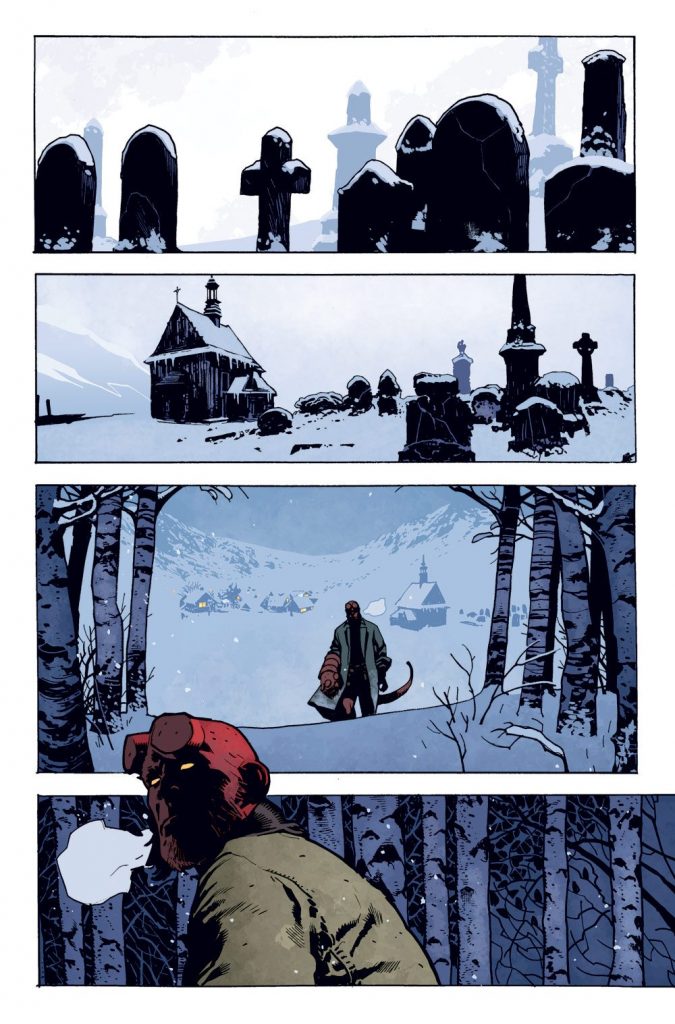 FS: Hellboy creator Mike Mignola writes the one-shot and clearly loves delving into stories of myth and monsters. What was the collaboration process like with Mr. Mignola?

AH: Mike wrote a draft, and sent it to me.  I did some designs, we had a little back-and-forth via email. We had just one phone call, and I tried to sound like I knew what I was talking about, but Mike knows what’s best and I do agree with him. I also had to wash his car a lot, as part of the collaboration. Mike said Corben did that every time they worked together. Wait. That sounds fishy when you write it out.

FS: Following up on that, there’s a tonal feel to the story that feels alternately disturbing and hopeful. Did you and Mr. Mignola discuss the balance you wanted to bring to the tale?

AH: It’s hopeful? Crap! I was just going for disturbing. We didn’t discuss that aspect, specifically. It was all there in the script, I glommed on to it immediately, and just ran with it during the art phase. 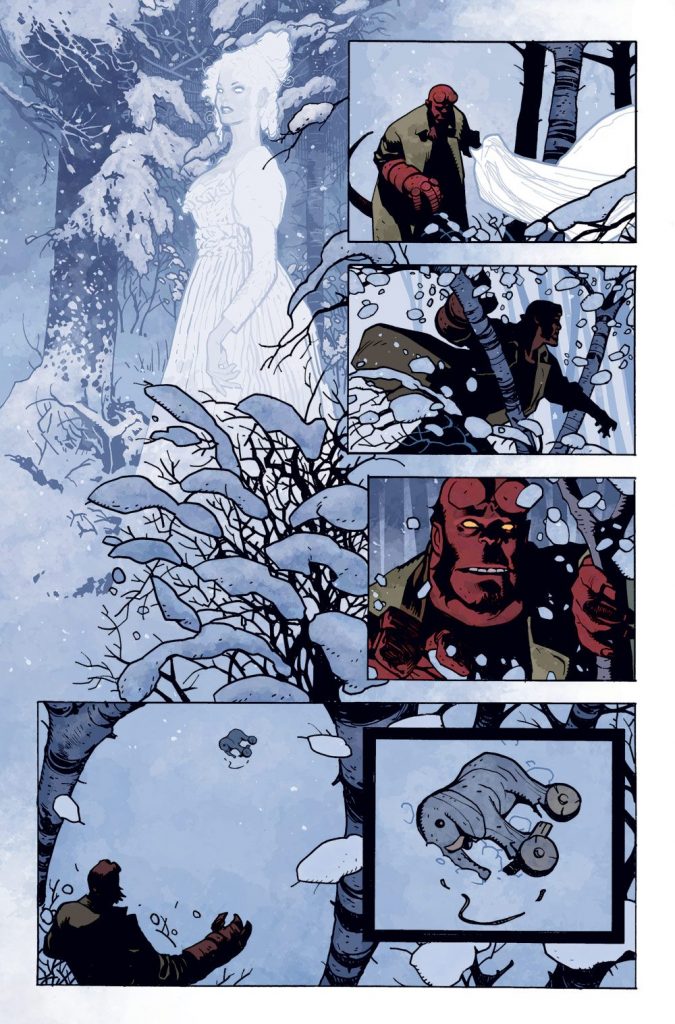 AH: I’m a multi-faceted artist. I can do many different things! I CONTAIN MULTITUDES.

Haha, I slay me. The story required a moodier approach, and I do love horror comics. So, I just used a different approach, one that suited the assignment.

FS: Krampusnacht has particularly come in vogue and gained popularity in the past decade or so in the American pop culture consciousness. What was the experience like playing in that sandbox?

AH: It HAS, hasn’t it? I never knew about the Krampus until genius artist J.G. Jones told me about a decade ago. The Krampus really has made a splash in America of late. It was great fun. We went to Austria last Christmas, so I had the correct mindset for that peculiar brand of Bavarian Yule horror. 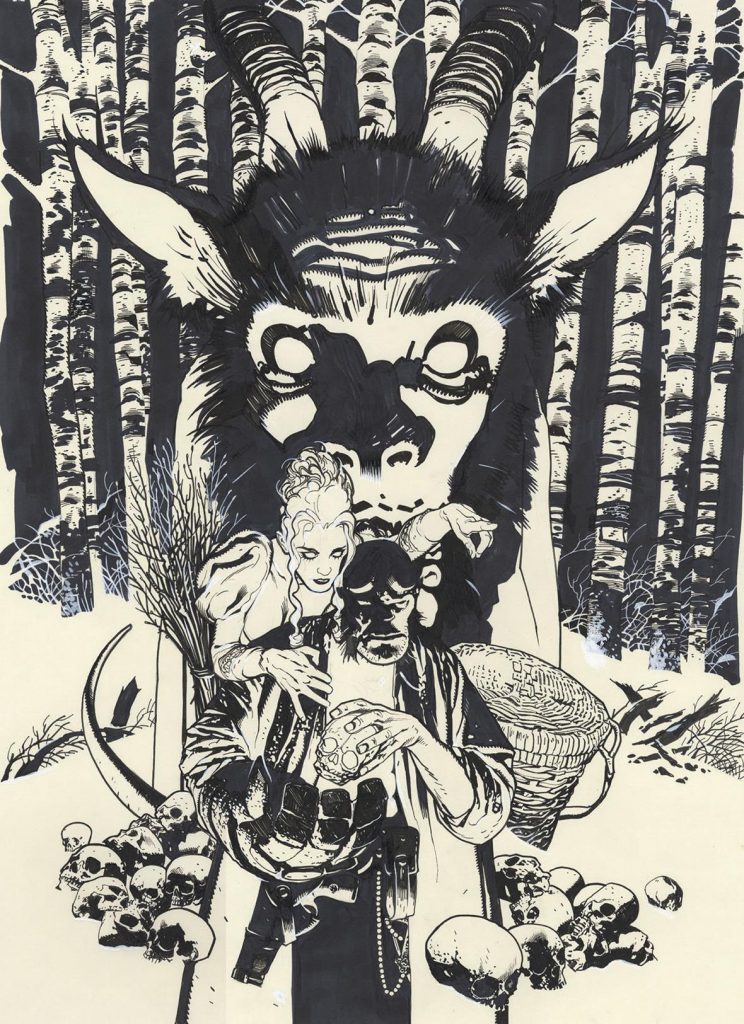 FS: Following up on that, with the different stories and depictions of Krampus in lore, what was the research process like for Hellboy: Krampusnacht?

AH: I love doing research for projects.  It’s the one part of the process I can’t screw up! I loved looking at those quaint old postcards, but they ARE quaint, and today’s audience takes a little more to spook than in Ye Olden Tymes.

FS: Are there any upcoming projects you’d like to tease that are coming down the pike?

Hellboy: Krampusnacht, written by Mike Mignola with Adam Hughes, is on sale this Wednesday, December 20th, from Dark Horse Comics.

The only thing more exciting than pitting Hellboy against this Satanic spin on Santa is the team-up of Mike Mignola and Adam Hughes.