Scientist Bruce Banner’s life has been an arduous one from the day he was first exposed to gamma radiation to becoming the larger-than-life behemoth known as the Hulk. Over the years, the Hulk—a manifestation of different aspects of Bruce Banner’s persona—has taken on different forms, from rampaging beast to cunning grappler to measured scientist, with many more iterations making themselves known.

However, the version of Bruce Banner’s forever companion has never taken on a shape like the one we meet in the first issue of Immortal Hulk, on sale now from Marvel Comics. Writer Al Ewing gives readers a Hulk who is articulate and ominous, dispensing judgment on those who would cause harm to others. That judgment, however, is swift and merciless, brimming with horror, keeping both readers and Bruce Banner on edge.

Mr. Ewing spoke with us recently about where we find the Green Goliath and his alter ego in at the beginning of Immortal Hulk, the new relationship between the two, returning the Hulk back to his horror roots, and what we can expect to see moving forward. 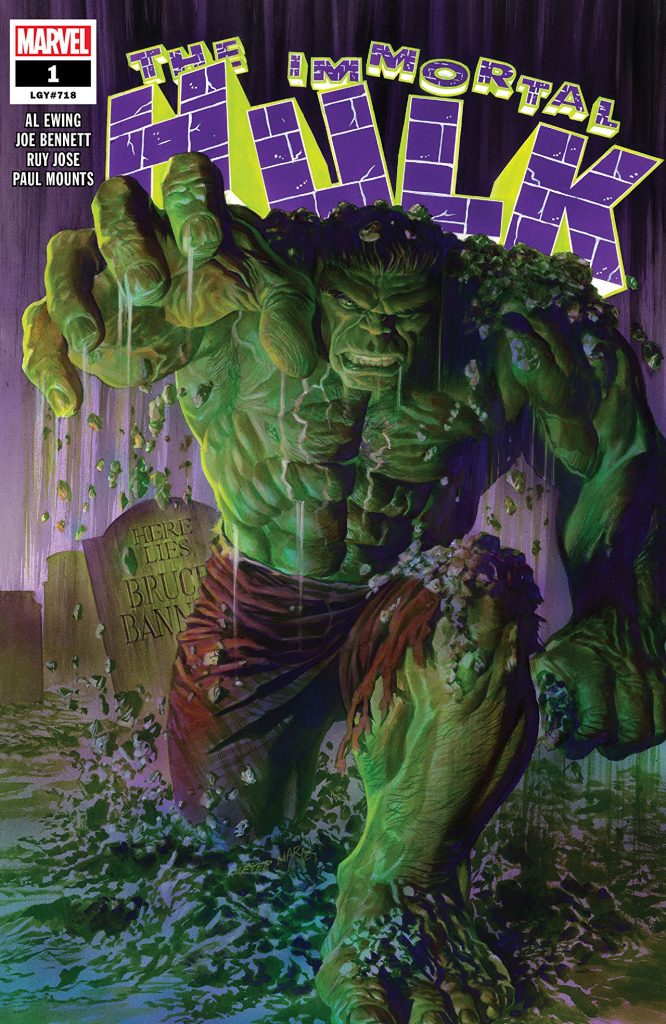 FreakSugar: For folks who are considering picking up the first issue, where do we find Bruce Banner and the Hulk in Immortal Hulk #1?

Al Ewing: In Immortal Hulk #1, the world believes Bruce Banner is dead, but there are still sightings here and there, like Bigfoot or Elvis sightings – so far, it’s kept to supermarket tabloids and conspiracy forums. Does the government know? Do the Avengers? All the reader needs to know is that Bruce Banner is very much alive, thanks to the power of the Hulk – and no matter what happens to him, when the sun goes down, it’s the Hulk’s time.

FS: The Banner/Hulk relationship has taken on a variety of shapes and forms in the past. What makes the relationship both similar to what we’ve seen and different to what’s come before?

AE: Our Hulk is articulate – no more third-person “Hulk this, Hulk that”. He’s as well-spoken as he was in the Joe Fixit days, or maybe even as he was in his very first appearances. And like Fixit, he’s very smart – very smart indeed, even when he’s trapped in Banner’s body. Bruce Banner, meanwhile, has seen better days. He’s stopped making plans for the future – he seems shell-shocked, living from day to day, enjoying small pleasures where he can find them, but otherwise almost acting as a delivery vessel for the Hulk. It’s almost a “Jesus, take the wheel” mentality – except it’s the Hulk taking the wheel, so maybe it’s the reverse. 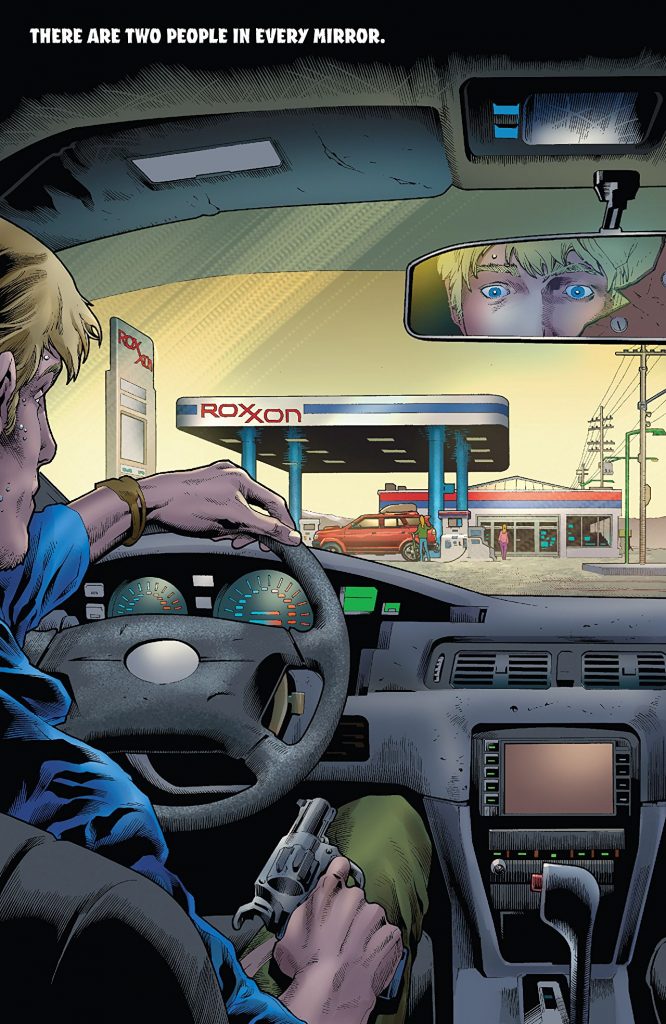 FS: Following up on that, one of the parts of the mythos that it seems you’ve brought back is the idea that Bruce changes into the Hulk at night. I’ve always liked that notion, that the Hulk emerges then because that’s when, traditionally, we think of night as the time when the darkness comes out to roam. Why did you decide to reintroduce that idea?

AE: Thematically, it worked with the horror tone, and it’s in keeping with previous iterations – I always like the idea that daylight is the Hulk’s enemy, that he’s strongest when it’s darkest. Plus, it means Bruce can’t just Hulk-out at the first sign of difficulty – for instance, if he wants to get across country, he’s got to make his own way. Hulk won’t help. That’s a wrinkle we’ve introduced, one we’ve not told any other websites about just yet – night is the Hulk’s time, but night doesn’t necessarily trigger the change. Unlike previous Hulks, this one is content to wait inside Bruce – he doesn’t grab every moment of existence he can get, maybe because he’s always in the background, with a measure of power over Banner the previous Hulks didn’t have. 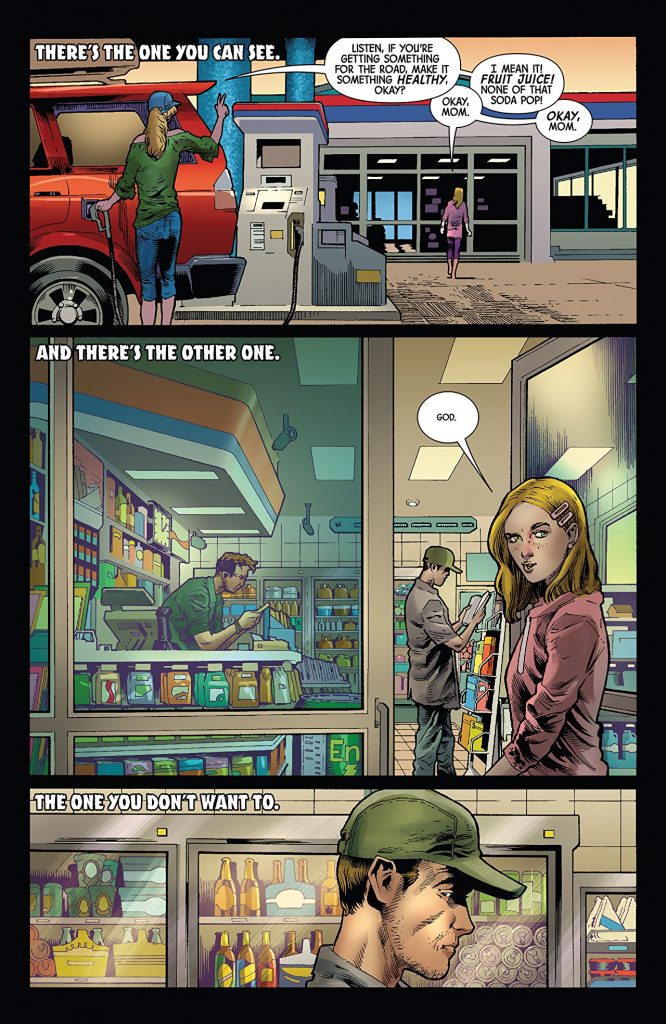 FS: While the Hulk is, of course, steeped in superhero lore, the monster aspect that was so prevalent in some of his early tales occasionally take a backseat to the superheroics. That’s not to say that the destructive monster angle is not there; it’s always prevalent or underneath the surface. But that feeling that the Hulk walked out of a 1930s monster movie has been at the forefront of late. However, the first issue of your book has that air about it. Was that a goal when you started writing the series?

AE: Part of the brief was to make it a real fresh start, make it very different from recent years. I’d been pushing for a horror take for a while, which put me in the running to pitch the book, and in the end that’s the take that won out. Personally, I wanted to avoid the mass destruction in at least the first issue – we’re going to slowly reintroduce it, and fans of serious smashing will get it as soon as #5, but I wanted to reset the tone to the very start, when the Hulk’s strength took a back seat to his shadowy nature. His strength was just part of his unstoppable nature – he was more like the bomb than a superhero, and one that might randomly go off against friend or foe alike. 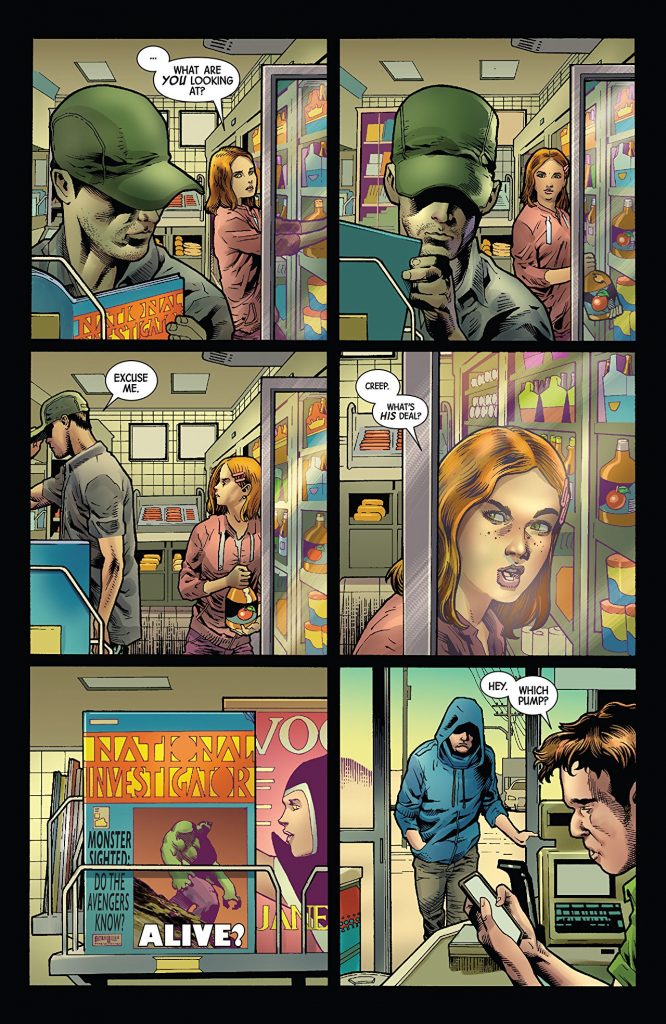 FS: Joe Bennett’s art is just gorgeous and has an unnerving atmosphere that matches the overall tone of the book. What is the collaboration process like between you two?

AE: Joe’s fantastic – he’s got a real way with layouts and expressions, and he’s brought a really wonderful, almost unnatural mass to the Hulk, a huge weight and solidity that the character needs. Most of the reviews have mentioned how Hulk seems to loom out of the page – even in headshots, he often seems bigger than the panel can handle.

How we work – I send in a very full script, with number of panels per page, fairly full panel descriptions and so on. Joe sends in layouts for approval based on that – occasionally, there’s some tinkering, which usually makes it better, and editorial has their say as well – then Joe pencils the issue, and then I write a “lettering script” before it goes to Cory. That’s when I’ll tinker with the original dialogue – I’ll move it around to fit the art, make sure it lines up with the expressions, make alterations where they’re needed. And then it’s onto the next one!

FS: The end of the first issue saw the Hulk passing judgment on the robber who killed Banner, a 12-year-old customer, and the cashier of a convenience store. We’ve seen the Hulk operating with varying degrees of intellect in the past, but this version of an intelligent Hulk feels unnerving. I know you can’t give too much away, but what can you tell us about this Hulk and why it has manifested in this manner?

AE: This Hulk is a response to the trauma of Bruce’s death and rebirth – Bruce is at a lower ebb than he’s been in a very long time, he’s living off the grid, avoiding his friends, he’s not even visited Rick’s grave… this Hulk is a response to that. We’re sort of drip-feeding little bits of this Hulk’s nature, dropping hints – I’m writing #7 right now, and that drops a very big hint indeed. We might have seen this Hulk before, in another form.

One thing I will say here is that previous Hulks have been Banner’s enemy, and this one isn’t quite that – but he’s a force of judgment, and eventually that force has to be turned in Banner’s direction. 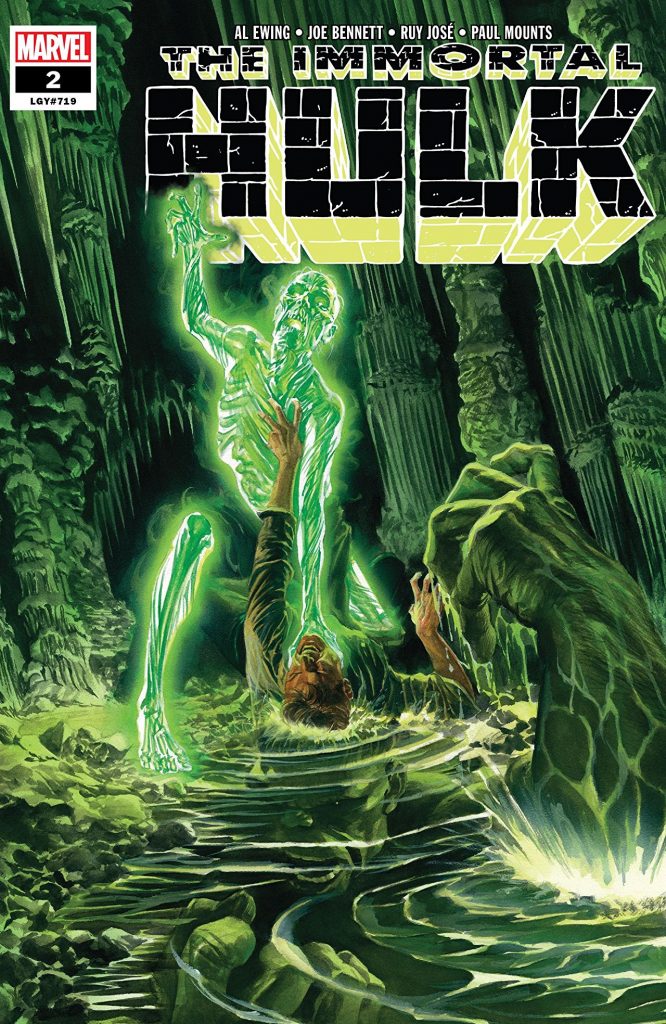 FS: The Hulk reemerged after Bruce was killed, playing into the title of the book. You talked about this a bit in the afterward of the first issue, but why are you playing with the notion of immortality in this series?

AE: Various reasons, but a simple one is that death has been done. The Hulk just came back from death – he was killed in Banner form by Hawkeye, who himself was dead for a while. That was witnessed by Iron Man, who soon after ended up in a death-like coma, and the whole situation was manipulated by Steve Rogers’ evil doppelganger – Steve himself, of course, has been dead more than once. I can’t remember if Thor was there – another occasionally dead hero – but I think Black Widow was, and of course she died at Evil Steve’s hands soon afterwards. So all six of the Avengers from the first film have now been dead, and come back to life. Death is clearly passé. So obviously the cool thing to do now is to declare that your protagonist can never die, and make that quite a queasy prospect in its own right. I’m only half joking…

FS: Following up on that, as a writer, are there any versions of the Hulk or Hulk stories that you feel an affinity for and have impacted your writing?

AE: The first six issues have a strange place of honor in my head – it feels like wild flailing in places, but there’s so much primal energy in those early issues as the Hulk bubbles and melts from one configuration to the next, trying to work out what to be, in the heated hands of Stan, Jack and Steve. Most of the other Marvel heroes found a basic configuration very quickly – even Ant-Man managed to stay as one thing for a few stories in a row. But the Hulk is mutating constantly until the comic gives up the ghost and he becomes a recurring villain – the hero that wasn’t. Similarly, the Peter David run left an impression, particularly those issues where the Hulk was a bruiser in Vegas – again, not exactly the hero, more the protagonist.

FS: At the end of the issue, we see Bruce asking himself if he’s a good person. This new version of the Hulk almost feels like it’s a judging Hulk, passing sentence on those who do wrong. Is it in any way a manifestation of Bruce’s self-judgment about what destruction he as the Hulk has committed in the past?

AE: That’s the best guess I’ve heard yet. This Hulk is… one that’s been lurking in Bruce for a long time, but whose time has only come now, when Bruce is at his lowest point. This is the accuser, the avenger, the Hulk that judges the world – and on some level, maybe Bruce knows that judgment has to come for him too.

FS: Is there anything you can tease about what can expect to see in the book moving forward?

AE: Hulk vs. The Avengers – and we play it our way. It’s still a horror comic.

A random small-town tragedy. A mystery illness that spreads with grief. A green glow on a lonely mountain. Three puzzle pieces that fit together to make a nightmare. And the only mind on Earth than can connect them up…belongs to the Immortal Hulk.