Writers of the Marvel character the Hulk have used the sometimes-rage-filled monster to comment on a variety of society’s ills, found both in civilization and in the human spirit. And that examination of those big ideas are thrown under the microscope in this past summer’s The Immortal Hulk: Time of Monsters #1 one-shot, scripted and co-written by longtime comics pro Alex Paknadel and current Immortal Hulk writer Al Ewing. In Time of Monsters, the curse of the Hulk rears its gamma-radiated head in the Neolithic era with expected and unexpected consequences. For any fan of the Hulk mythos and pathos, Time of Monsters is a must-read.

I spoke with Mr. Paknadel recently about how he became involved in writing the issue, the inspiration behind the story and the setting, and his thoughts about why the Hulk is a character storytellers and fans keep revisiting. 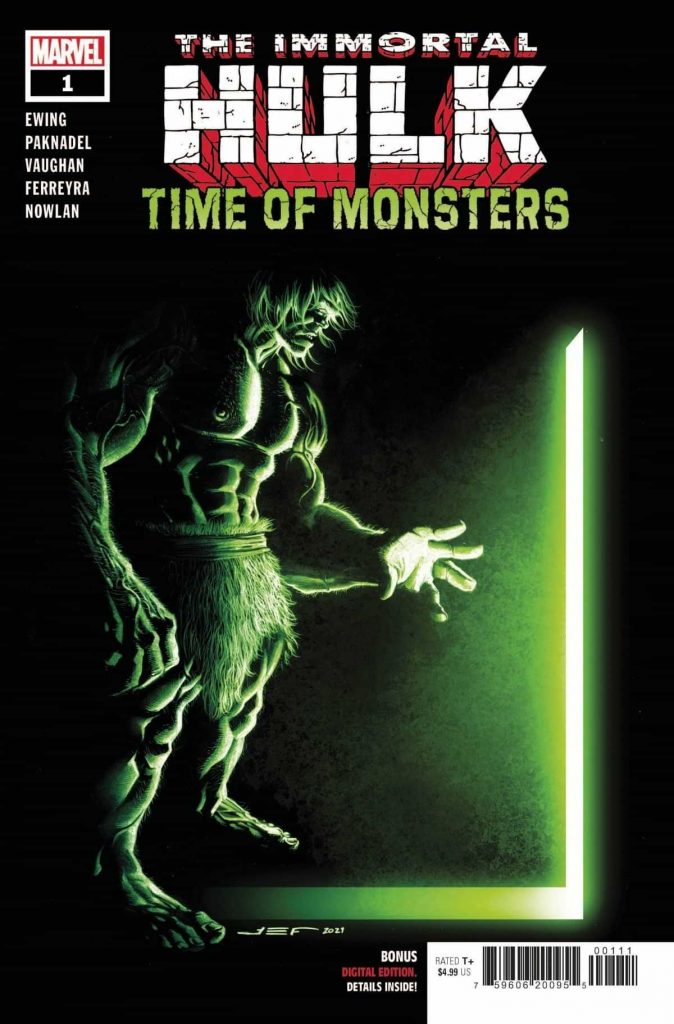 FreakSugar: Before we get to your work on The Immortal Hulk: Time of Monsters, what can you tell us about your history with the Green Goliath? What is your earliest memory of Hulk or your favorite story or stories featuring the character?

Alex Paknadel: I’ve been a fan of the Hulk since my dad pretty much raised me on the Wein-Trimpe run from the seventies, but I didn’t become a mega fan until the PAD-Keown run in the 90’s. In fact, the first issue I ever bought was The Incredible Hulk #377, which just happens to be one of the best Marvel comics ever made. The psychological realism PAD brought to the character still holds up beautifully, and I’m fairly convinced that this run more than any other made me a more mature and discerning reader – not just of comics, but of fiction in general. In my view, the best Hulk creative teams recognize that a book that addresses blind, unthinking rage must be one of the smartest books on the stands. I think that’s why Al and Joe’s run is a modern classic, and why I’m certain Donny Cates and Ryan’ Ottley’s will be as well. Hulk readers are smart; they come for the smashing but they stay for the human drama and the big ideas.

FS: How did you become involved with Immortal Hulk: Time of Monsters?

AP: Well, [writer] Al [Ewing] and I have been friends for years and I suppose it all came together over a phone call. I was reading a book by Barbara Ehrenreich called ‘Blood Rites’ about the origins of violence in human civilization and I remember being struck by how many of Ehrenreich’s hypotheses chimed with the themes in Al’s Hulk run. We were chatting and I told him I thought the Banner Hulk was essentially a scapegoat or sacrificial victim for the military industrial complex, and by the end of the call I’d essentially pitched him the bones of what became Time of Monsters. Al liked it enough to pitch it directly to Wil Moss and Sarah Brunstad at Marvel, and within a few months we were off to the races and I was writing the thing. It all came together very smoothly. 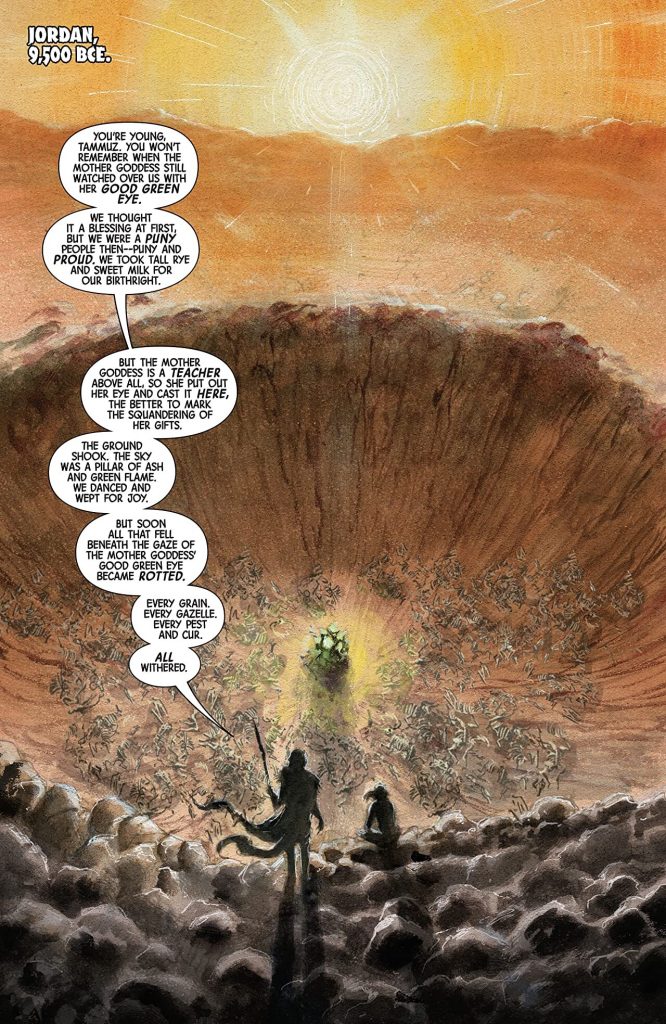 FS: What can you tell about your story in the issue?

AP: Well, it’s out now but for those who haven’t read it, it’s set in Jordan in 9,500 BCE – just at the point where Neolithic tribes in the fertile crescent were forced to abandon hunter-gathering and husband their resources with agriculture and cattle domestication. One village in particular has been blighted by a generational drought caused by a radioactive asteroid they call ‘the good green eye’. Some of tribal elders believe the drought is punishment for their years of plenty, so the decision is made to sacrifice one of their own to the eye. A young man named Tammuz is selected and offered up to the asteroid, which of course is saturated with gamma radiation. The green door opens for the first time and things get a little bit smashy.

FS: Al Ewing has been writing The Immortal Hulk main series for quite some time now. What was working with him like?

AP: I’ve worked with Al before in broadly the same capacity and it’s always a delight. This was no exception. After I’d pitched him the story – which at the time was set in the far future – he suggested I set it in the deep past instead, making it (for now at least) the first gamma-created Hulk story. He then asked Marvel to let me write it solo with plot input from him, which was a huge trust fall for him in terms of cutting me loose on the mythology he’s spent years establishing. Most writers I know – myself included – guard their toys a little more jealously, but Al has the smallest ego of any writer I’ve ever met, which is bananas considering he’s one of the most talented and irrepressibly inventive ones we have. He made himself available to me throughout the writing process, and of course he was on hand to make sure I didn’t stray from his vision for the series. For the most part though, he cheered me on and worked with Wil and Sarah to make sure I had the resources and the room I needed to tell the best Hulk story I possibly could. 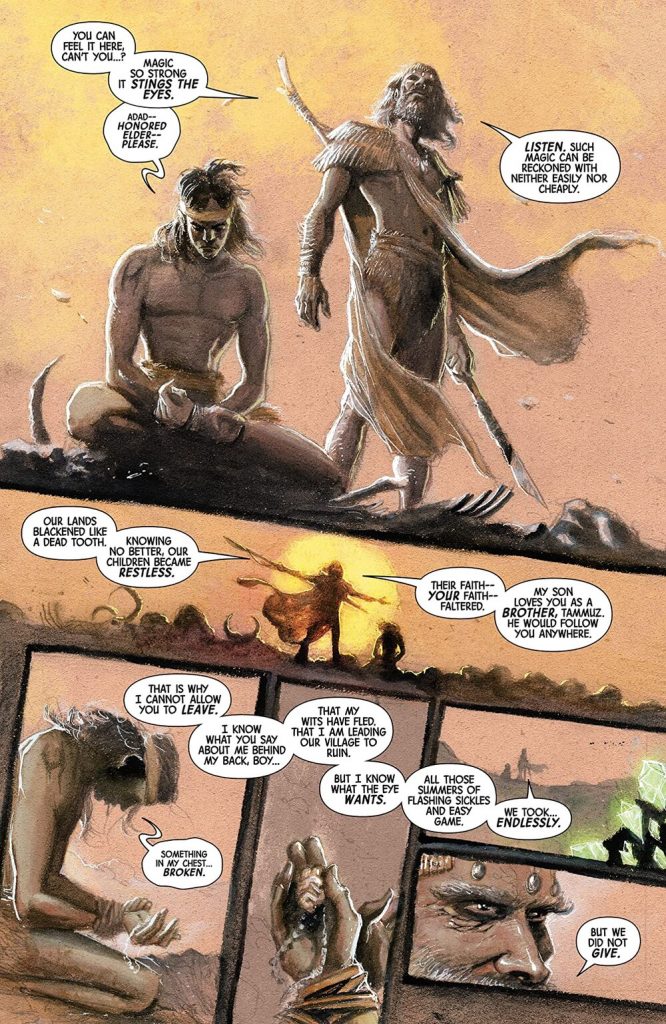 FS: The story is just gorgeous. What was the collaboration process like with the whole creative team?

AP: Honestly, the process was seamless from my perspective. I was so happy when Sarah Brunstad and Wil Moss reached out because I’ve wanted to work with them forever, and Juan Ferreyra’s been one of my bucket list artists ever since I saw his work on Arvid Nelson’s excellent Rex Mundi. Juan was extremely receptive to my ideas and we got a little dialogue going, but my buddy Matt Rosenberg urged me quite early on to let Juan do his thing because he’s a genius. Accordingly, I ended up with a new page I hadn’t budgeted for, but I rewrote around it and – shock, horror! – it turned out Juan’s instincts were 100% on point. We all knew we had something a little bit special at the end of it, I think.

FS: The tale takes place millennia ago. What is the inspiration behind the story, especially its setting and how it ties thematically to the core Immortal Hulk series?

AP: Well, as I said the story was inspired by Barbara Ehrenreich’s writings on violence in ‘Blood Rites’, but once it looked like it was happening, I consulted a couple academics – Professor Natalie Munro of the University of Connecticut and Doctor Stephen Curtis of the University of Central Lancashire – to try and get the historical and ritualistic details right. Professor Munro provided some much-needed historical context and Dr. Curtis pointed me toward the writings of anthropologist Rene Girard, whose theories of scapegoating and sacrifice were invaluable.

More broadly, the reason for the setting – following a discussion with Al – was that the green door mythos he created allows for many Hulks in many time periods, and it makes sense that there would have been a Hulk at the dawn of what scholars loosely define as “civilization”. This is because civilization has always expressed its violence ritualistically in the form of a sacrifice – where a perceived impurity is embodied in a sacrificial victim who is often ceremonially exiled or killed in order for harmony to be restored. We can see that logic in operation now with populist appeals to racism and xenophobia all over the world – in times of resource scarcity or great upheaval, civilizations turn on and scapegoat the other. For me, that’s what the Banner Hulk represents: he will not abide by society’s rules and he will not be contained so he must be destroyed, but – irony of ironies – he is a product of the very system that wants him dead. I wanted to take that theory back as far as I possibly could – to take the “immortal” in Hulk and apply it to the deadly, tragically inescapable paradoxes of human civilization. 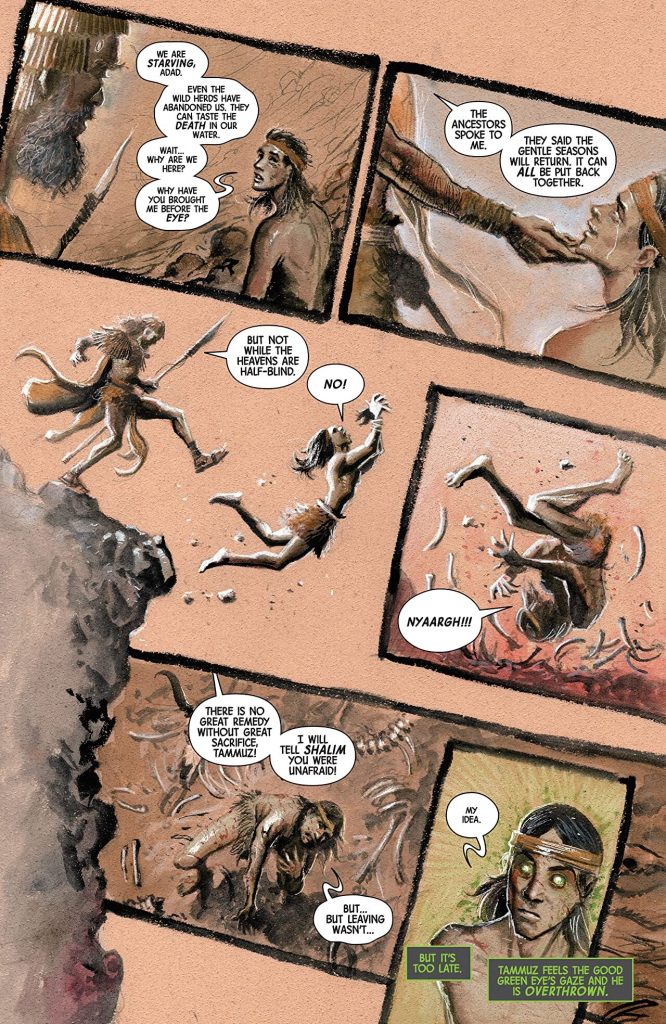 FS: Looking at the history of the Hulk, why is the idea so compelling, both to creators and fans?

AP: I think he speaks to a very primal urge to tear down the grey, oppressive systems and institutions we have to negotiate on a daily basis. How many subway commuters have had moments where the heat and the smell and the crowd have made them wish they could just explode and be left alone? How many people have wanted to put their boss through a wall or scare the crap out of a politician that’s made their lives miserable? He represents freedom, and even better he flatters the part of us that thinks we would still behave ethically without civilizational restraint. Now personally I don’t believe any of that for a second – I believe institutions are a rickety rope bridge over an abyss that plunges all the way down to atrocity and atavism – but the fantasy of a person with the power of a mob is as seductive as it is disturbing. 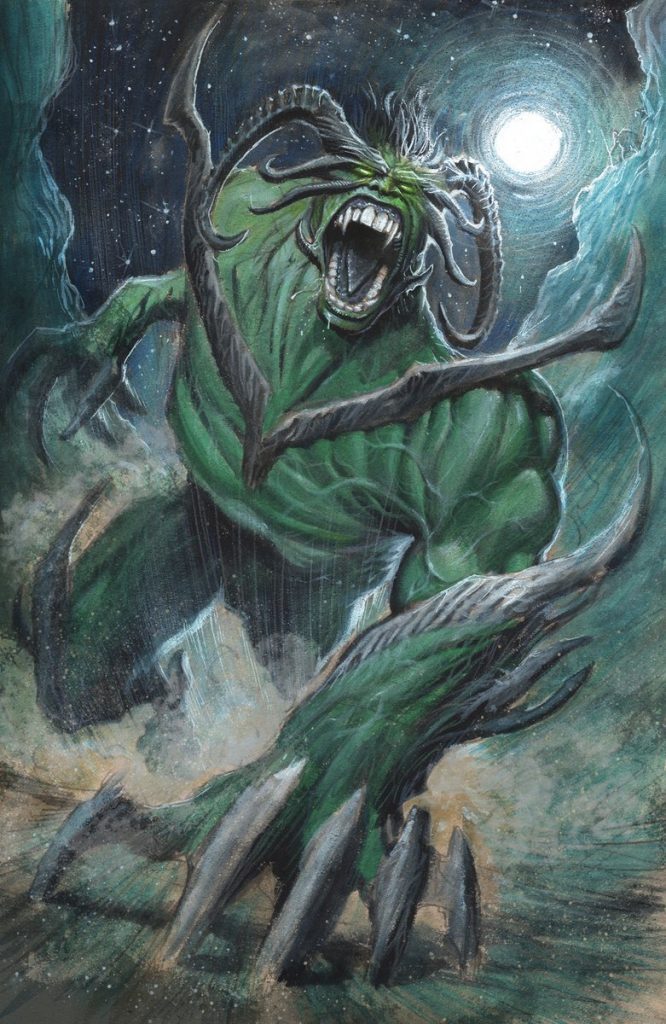 FS: Can you tease what other work you have coming down the pike?

AP: Well, there are some more immortal characters in my future. Also, I’m in regular contact with Marvel about an upcoming project that will give me temporary access to a character I’ve always loved. I’m very happy and very blessed.