From what the Internet machine is telling me, folks are big fans of the Snapchat. (Hell, even I love the one that makes me look like a golden forest creature–my eyes have never been so beautiful.) With the 20th Century Fox film Aliens turning 30 this year, the app has decided to get on the snappy goodness to bring users their own facehugger filter! Yes, you, too, can bear the look of a hapless victim getting your face impregnated by a hostile alien. 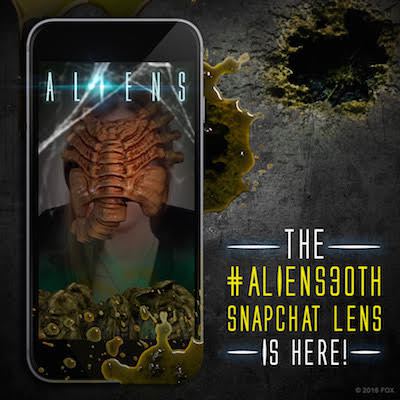 Here’s the skinny from the official press release:

Twentieth Century Fox Home Entertainment just launched a Snapchat lens in support of Aliens 30th Anniversary! The lens will be available on Snapchat today through Sunday, October 23rd.
All you need to do is raise your eyebrows to have the Facehugger swarm, and then watch what happens next!

Honestly, as a die-hard fan who pops in Aliens every Halloween if only to see Paul Reiser’s character get his comeuppance, this is pretty neato torpedo. Give it a try, but be fast: you can only use the filter through this Sunday, October 23rd.