This year, The Demon Etrigan, Jack Kirby’s hellspawn comic book creation, celebrates his 45th anniversary, just as we celebrate what would have been the King of Comics’ 100th birthday. As such, what better time to give the devil his due than with a brand new miniseries debuting next month?

In The Demon: Hell Is Earth, written by Andrew Constant with Brad Walker on art, Etrigan and Jason Blood—the human to whom the Demon has found himself bound for centuries—make their way to Death Valley, prompted by Jason experiencing an unnerving vision. What follows is chaos, mayhem, and the threat of Hell consuming the Earth.

Mr. Constant and Mr. Walker spoke with me recently about where we find Jason and Etrigan’s sometimes fractured relationship at the beginning of Hell Is Earth, whether there is any unique pressure tied with working on The Demon for Kirby’s centennial, and why they set out to tell a self-contained story. 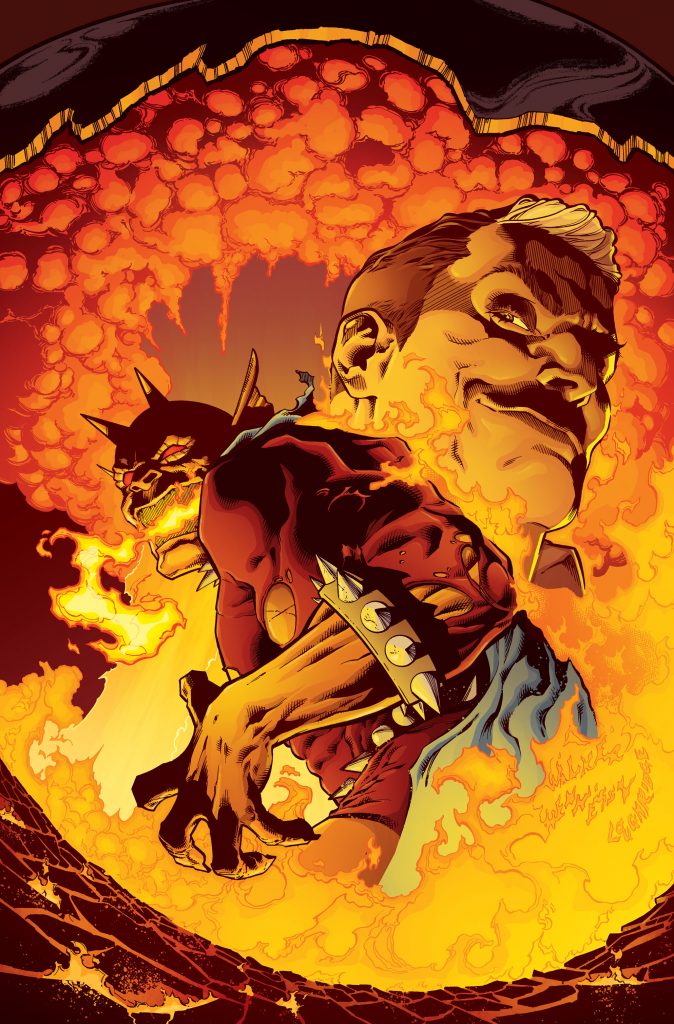 THE DEMON: HELL IS EARTH #1 cover

FreakSugar: For folks who are considering picking up the series, what can you tell us about the conceit of The Demon: Hell Is Earth?

Andrew Constant: The last time we saw Jason Blood and The Demon Etrigan was in the comic Demon Knights. By this time, they’ve been together for quite a while and there’s a polite antipathy between the two. They clearly don’t like each other at all, but time has created a strained gentleman’s code, as it were.

Brad Walker: I think it presents a very classic feel to these characters, but at the same time it’s a new direction for them. When we began the project, Andrew and I discussed that the story had a DC Universe yet almost Vertigo vibe to it that we both enjoyed and leaned into.

At the same time, I didn’t know if it would have a “Rebirth” tag slapped to it. I didn’t know if “DC: Rebirth” would still be a thing. I kind of approached it in my mind as a “Rebirth” book where I wanted it to have a dark feel and a comedic vibe at times. I wanted it to feel like a very accessible Demon book. If you like The Demon, you get everything you want with this book. And if you’ve never read The Demon, the book would be accessible enough where if you just flipped through it on the stands and thought it looked cool.

AC: I cut my teeth on horror stuff. I’ve done a lot of books on horror stuff before I came to DC. I feel like I can draw on both sensibilities. And that’s what The Demon is: it’s a horror book and a superhero book. You have to have that edge, but you also have to have a comfort level to enjoy the character. 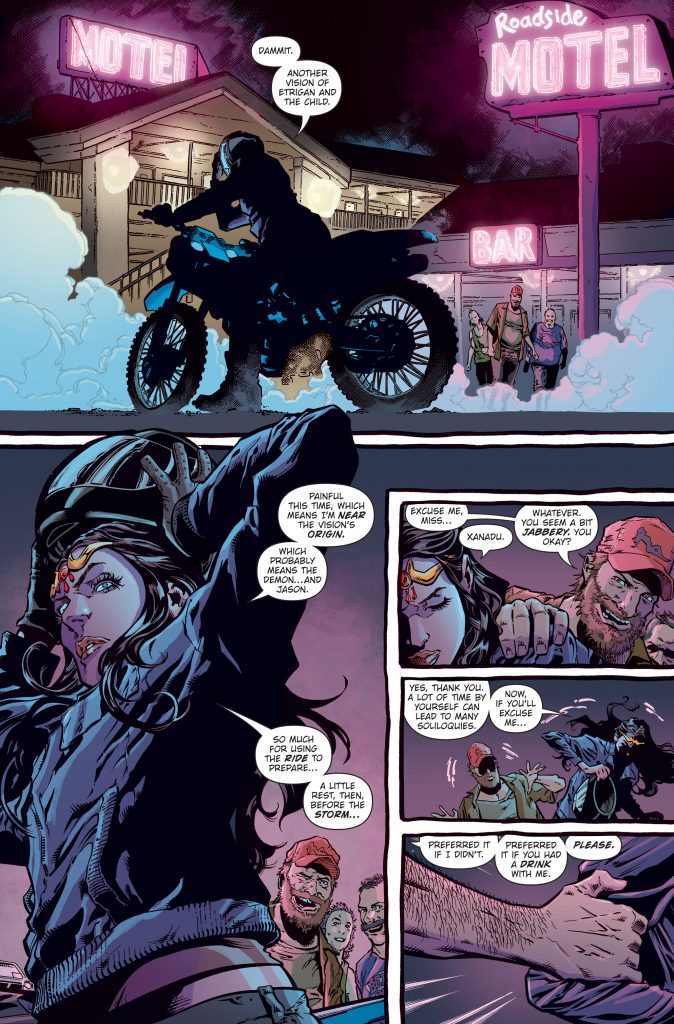 FS: Brad, the art is amazing and feels like a nice blend of your style and a 1970s evocative feel. Is that how you approached it.

BW: We’ve been saying that we’ve looked at the book like an 80s or 90s Vertigo-type of book. But yeah, Gene Colan 70s books, with lush inking—I love that sort of stuff. When the book was offered to me, I was a little surprised that it was something that I would get offered. I love the character so I thought, “They’re offering, take it!” [laughs]

So it felt like a good opportunity to go in a direction visually that was different for me or that people wouldn’t expect from me necessarily. And I love big, bombastic superhero comics and it’s nice to bring something like that to this, which is a little moodier, a little darker. It was a good chance to be able to flex some muscles I’ve always had, but I don’t think people were used to seeing. It’s like presenting my art through a prism, which is exciting on a personal level going into it. 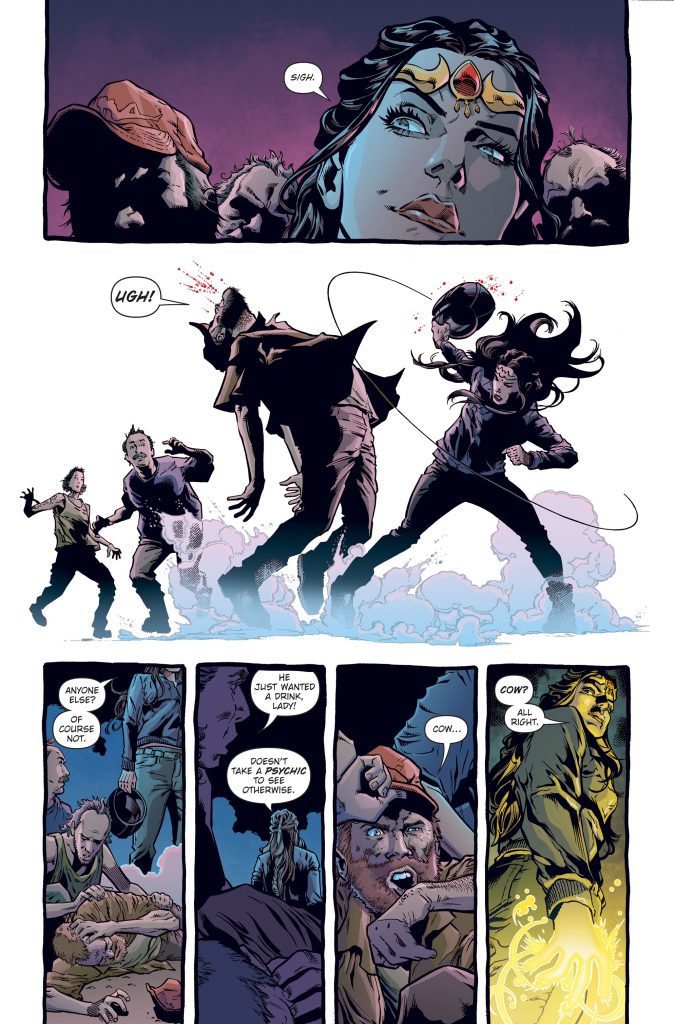 FS: The Demon, in addition to being an interesting character, is a Jack Kirby character that has experienced less of the limelight than some of his other creations. What’s it like to work on The Demon on Kirby’s 100th birthday celebration?

AC: Clearly, I feel no pressure whatsoever. [laughs] Are you freaking kidding me? Seriously, when I put two and two together, I was like this is great! But you are completely aware of Kirby’s shadow the entire time.

The big thing is that you don’t want to tarnish his legacy—not that you could. But you want to make sure you’re respectful to the master.

BW: I’m a huge Kirby fan. I’ve had a chance to draw other Kirby characters and it’s always been so fun for me. Now, with The Demon, I have a whole series to approach it aesthetically how I want to. I think Etrigan is one of the lesser touched-upon Kirby characters where you can play a little bit more. If you get a Fantastic Four book, I think there are certain expectations of 55 years worth of stories you have to work between and adhere to.

The Demon is pretty open. He pops up every couple years, people seem to like him, then he goes away. He’s definitely one of those Creator’s Characters type of characters. I can’t tell you how many creators I’ve had contact me since it was announced that I was doing the book to tell me how jealous they were that I was getting to work on it. He’s one of those characters that people tend to forget he’s there, then they’re like, “Ah, I love that guy, he’s so cool.” So I’m hoping we put enough attention on him on this year of all years and do him justice in that sense. 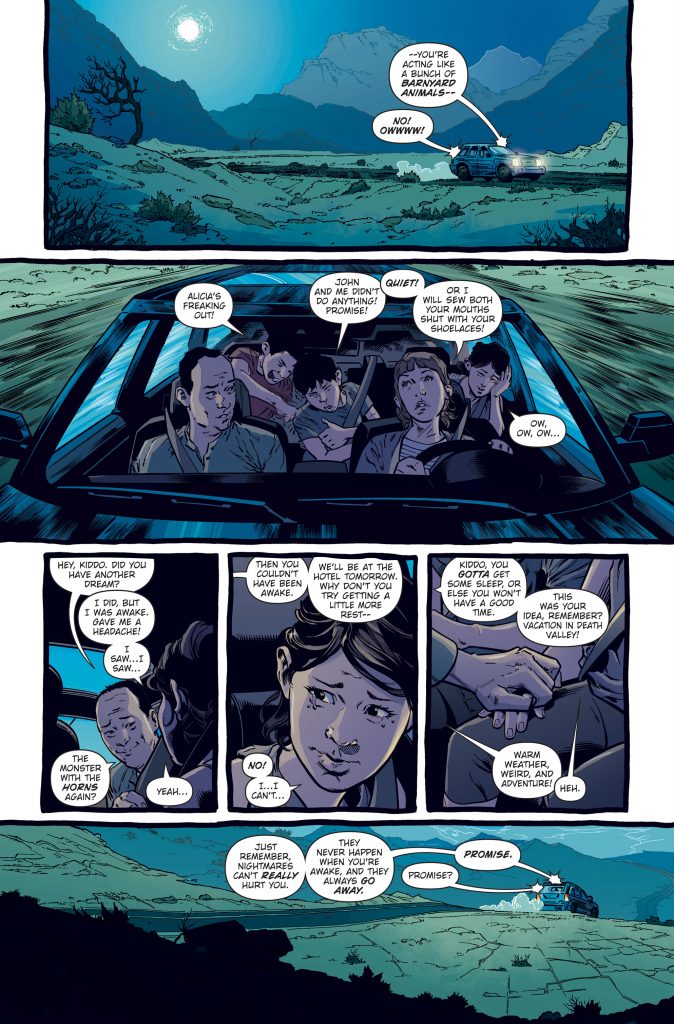 FS: Were there any stories that inspired you along the way?

AC: When I do research for a character, I try to read as much as I can, then try to forget all of it so I don’t tread on someone else’s stories. I don’t want to get halfway through writing a story and realize I’m regurgitating someone else’s great take.

Having said that, I grew up reading the Garth Ennis run completely. It’s cemented itself into my brain. I want to have that same sense of humor and viciousness, while still making this new book mine and Brad’s. I think that’s what we’re doing here.

BW: I was kind of the same way. I wanted to be careful to not put too much fanboy enthusiasm of any one era into it and make it less unique of a tale. The nice thing is that when you look at the entire run of the character, whenever he pops back up, he has a lot of identity in each run. You have the Kirby run, you have the Matt Wagner stuff, you have Ennis and Crea, Alan Grant. Each of those eras, because there was a huge gap between eras, each was unique. I wanted to be careful to let this be its own thing. I wanted enough of my natural sensibilities to come out so it wouldn’t be too premeditated and kinda just be. I could look at the scripts and try to bring out the best in them instead of thinking how to inject something from a particular past run. I feel like doing the latter hurts a character or a story.

I was the same way when I worked on Aquaman. I love Aquaman, but I felt like if I leaned too much into what I loved about his stories, I would have undermined the whole thing. 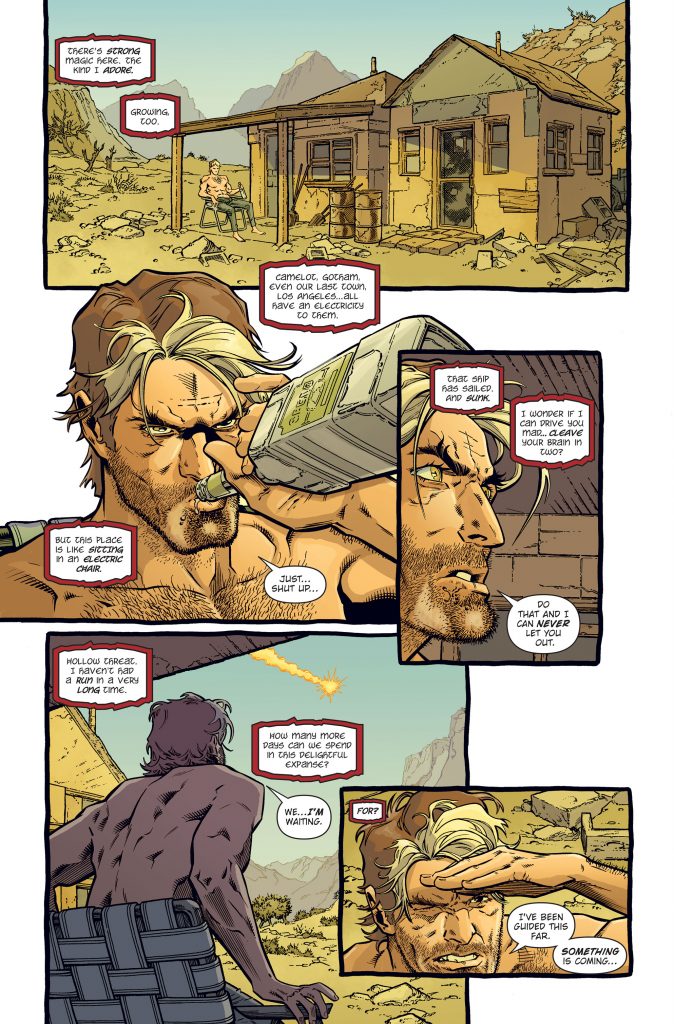 AC: There are many more characters from The Demon mythos that are going to be coming to the fore that will surprise readers. What Brad and I wanted to do is make sure there are reveals throughout the book. It’s like a rock song. You want to make sure it has to have the same energy throughout. There are lots of interesting reveals that’s moving toward a big ending as well.

BW: I think that’s a good general rule of thumb in storytelling, to give a verse-chorus-verse to it. [laughs] The medium runs the risk on the reader losing interest for whatever reason so quickly that, as a storyteller, you have to pull them through. If their mind starts to wander, you have to smack them in the face with a big reveal or a punchy action scene or a beautiful, epic splash page. I think that’s solid, sound storytelling.

I think The Demon fits into that mode very well. It’s exciting throughout. The setting itself becomes a character much more. Characters that Demon fans know show up. I pushed as hard as I could to make the pages as bombastic as possible.

It’s contained. It’s very set much set in the DC Universe, but it’s Etrigan’s little corner of the DCU. Batman: The Animated Series is a great example. The creators took all the elements of Batman and created such an atmosphere and such a vibe. It’d be full of ourselves to compare this to something as time-tested as Batman: The Animated Series. [laughs] But this book is all about giving Etrigan’s story its own vibe and mood that’s contained within itself. Those are the kind of comics I gravitate toward. Everybody loves a good, huge, crazy crossover every now and then, but I love the experience of picking up a title that may be within a shared universe, but you’re reading these people’s stories and this one struggle as its own contained arc. That’s the sort of thing that drawns me to a project, but this one definitely had a sense of that. 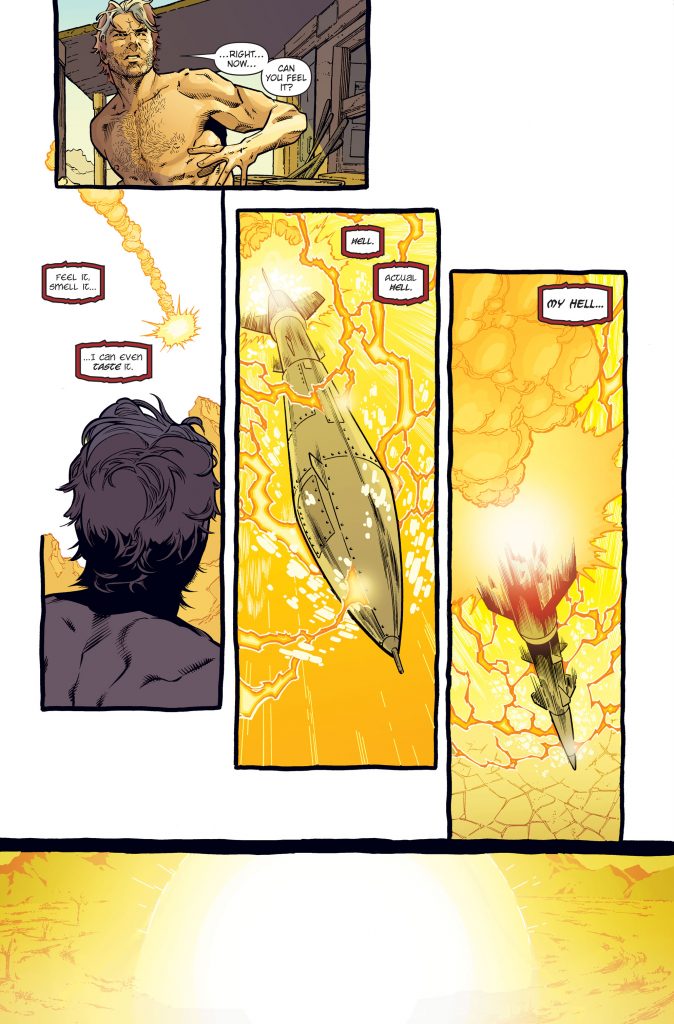 FS: On another note, I have to say that you included a Hell bomb in Death Valley is one of the best things I’ve read all year. [laughs]

BW: The Hell bomb is a nice example of what I was talking about. It literally contains the action in a locale and it’s almost metaphorical for our approach to the story in general. We’re reading all of this inside of a Hell bomb. [laughs]

AC: If you think that’s huge, wait until see what Brad does in issue #2 with three characters. I write comics a lot for myself and they bring me such joy. I’ve been reading DC Comics since before I knew what “DC” stood for. I just wanted to write one of the best DC Comics I could enjoy and The Demon, by far, is one of my favorite characters. Brad and I want to do a book that readers enjoy as much as we do. 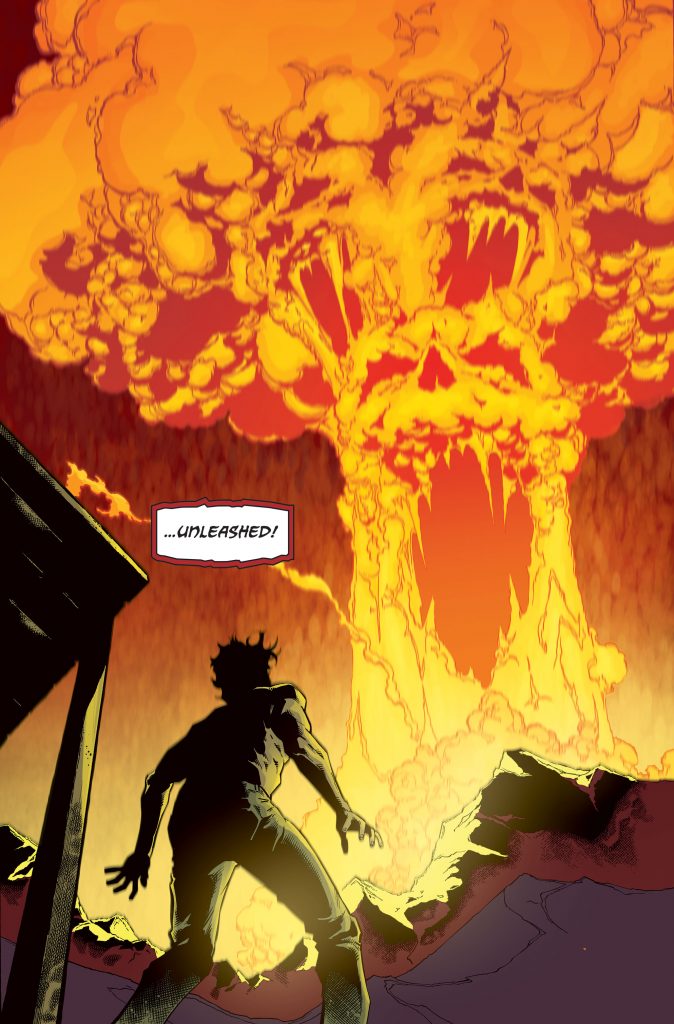 Jason Blood and Etrigan: the best of enemies, destined to spend eternity bound together. When a haunting vision leads Jason to Death Valley, a supernatural weapon is unleashed, radically transforming not only the land, but also Blood…and the Demon. The worst, though, is yet to come, as hell begins to make its way into our world.

Don’t miss the start of this horrifying miniseries, where Etrigan and Blood’s relationship will be changed forever!