On Jimmy Kimmel Live! last night, the actors portraying Avengers on Team Cap in next month’s Captain America: Civil War joined Jimmy to discuss the film and give viewers a new bit of movie footage for their eye-holes. Since Marvel Studios revealed that Paul Rudd’s Ant-Man would be a member of Cap’s squad, I thought the decision made sense: Ant-Man is a bit of an everyman and would most likely bristle at the thought of government oversight on superhero activities, just what Steve Rogers is opposing. In the new clip, we get a look at just how Ant-Man’s first meeting with Captain America went, with the shrinking superhero a bit in awe of the Star-Spangled Avenger.

Following the footage, the actors answered questions to see how well they knew their cast mates, giving insight into Chris Evans’ love of Disney films and Paul Rudd’s family history. 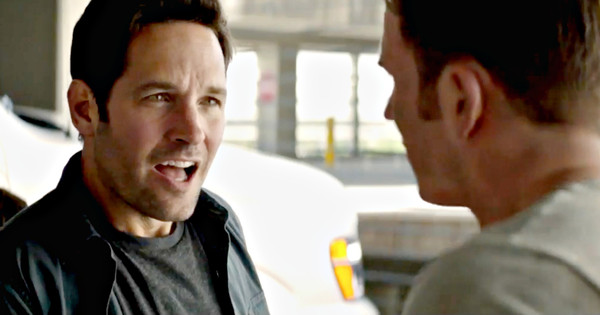 Ant-Man is so happy!

Marvel’s “Captain America: Civil War” finds Steve Rogers leading the newly formed team of Avengers in their continued efforts to safeguard humanity. But after another incident involving the Avengers results  in collateral damage, political pressure mounts to install a system of accountability, headed by a governing body to oversee and direct the team. The new status quo fractures the Avengers, resulting in two camps—one led by Steve Rogers and his desire for the Avengers to remain free to defend humanity without government interference, and the other following Tony Stark’s surprising decision to support government oversight and accountability. Get ready to pick a side and join the nonstop action playing out on two fronts when Marvel’s “Captain America: Civil War” opens in U.S. theaters on May 6, 2016.