The long-awaited third installment in creator Frank Miller‘s Dark Knight trilogy, The Dark Knight III: The Master Race from DC Comics, will take a look at what’s become of an older and beleaguered Batman following the events of Batman: The Dark Knight Returns and The Dark Knight Strikes Again. Along with Miller and co-writer Brian Azzarello, artist Andy Kubert will be tackling the pencils for the highly anticipated sequel hitting later this month. Mr. Kubert was kind enough to speak with me about his involvement in this newest chapter in the Dark Knight’s twilight years and how he approached the world Miller has built.

FreakSugar: The Dark Knight Returns is such an iconic story and one that is embedded in the memories of so many fans. What were your feelings about approaching a sequel?

Andy Kubert: I’ve been fortunate enough to have worked on a lot of big projects in my career, but this is probably the biggest. My feelings mostly were that I hoped not to screw it up!

FS: How did you become involved with the project?

AK: About a year ago, [DC Comics co-publisher] Dan Didio said he had a big project brewing and asked me if I would like to be involved. After telling me it was a Dark Knight sequel with Frank, I immediately said yes. I had no idea of how much I would be involved with it at that time because I heard that it would probably involve a few artists. 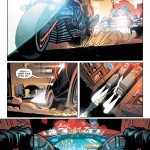 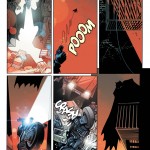 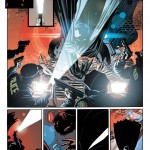 FS: Frank Miller’s art has a certain iconic feel that we all recognize, as does yours. How did you approach the layouts, paying homage to what’s come before while making the art uniquely your own?

AK: It’s not paying homage, but mostly what I see it as what how the art and storytelling should be handled.  I look at each project individually, and approach them with what I think would work for that one. With the Dark Knight, I felt it definitely needed to be done along the lines of the first two installments. Frank is such a master storyteller and cinematic layout artist, that it was a pretty daunting task. I hope I can even come a little bit close to what he had achieved. I pretty much dialed down the detail that I usually put in and focus on what makes that scene or action important.  I try to use contrast and composition for that focus.  A lot of the pacing is in the script. [Series co-writer] Brian [Azzarello] is doing a terrific job with that.

FS: You’ve worked on Batman many times before. What makes this experience different for you? Do you approach the character with a different sensibility?

AK: This experience is different because its the sequel to the most iconic Batman story ever. And honestly, the script tells me how to approach the character. It’s all through the actions and dialogue.

FS: Thank you so much for your time!