All of us, at one time or another, may have asked ourselves if we are living our best lives; not in the overused meme sense of the idea, but whether we are maximizing our potential. Are we living facades without substance beneath, or are we trying to trick others and ourselves into think that the surface paint is the reality? Are we destined for something more?

That is one of the concepts that writer Richard Starkings and artist Abigail Jill Harding explore in their miniseries Ask for Mercy, part of comiXology’s Originals line of series. In Ask for Mercy, a young real estate agent finds herself transported from her life of trying to keep up appearances to get ahead in her profession to the middle World War II, where she contends with Nazi monsters alongside other monsters. Exploring notions of destiny and identity—and chockful of horror and action—Ask for Mercy is an engaging, gorgeously-rendered ride for anyone grappling with a sense of self or just loves monster romps.

I spoke with Ms. Harding and Mr. Starkings recently about the idea behind Ask for Mercy, creating a horror book together, how social media and creating personas plays into themes in the comic, and how the late Steve Ditko has impacted their work.

Also check out our exclusive preview of Ask for Mercy #3, on sale this Wednesday, August 8th! The preview pages are sprinkled throughout this interview! 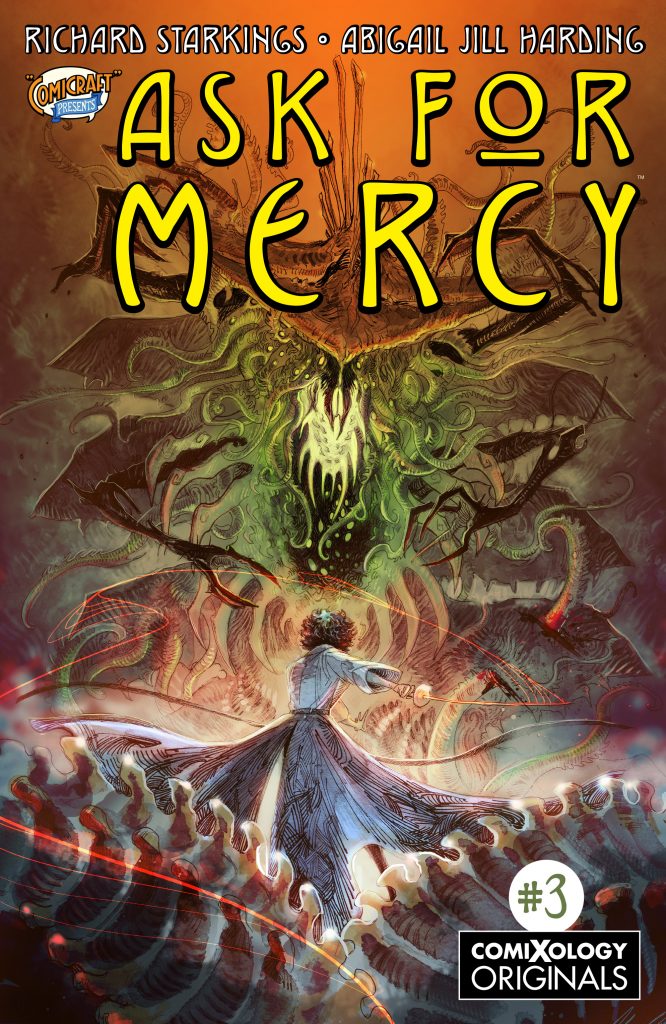 FreakSugar: For folks considering picking up the book, what can you tell us about the conceit of Ask for Mercy?

Abigail Jill Harding: A girl finds herself in Nazi occupied France, 1942 to be exact. She meets a group of monsters who happened to be fighting Nazis that are also monsters.

Richard Starkings: Ask for Mercy is an action and adventure story featuring a motley crew of characters that we slowly get to know more about as the series progresses. It starts small and builds big… and we are all about MONSTERS! I love, love, love that comiXology gives us the opportunity to release Ask for Mercy one issue at a time with very little to spoil the readers’ experiences – we haven’t even released all the covers yet! Robert Kirkman did something very similar recently with his amazing series Die! Die! Die!, drawn by Elephantmen alumnus Chris Burnham, but we beat them to the punch with comiXology’s crazy launch of four new titles June 1st! Keeping the story and art a secret since July 2017 was a beautiful kind of agony! 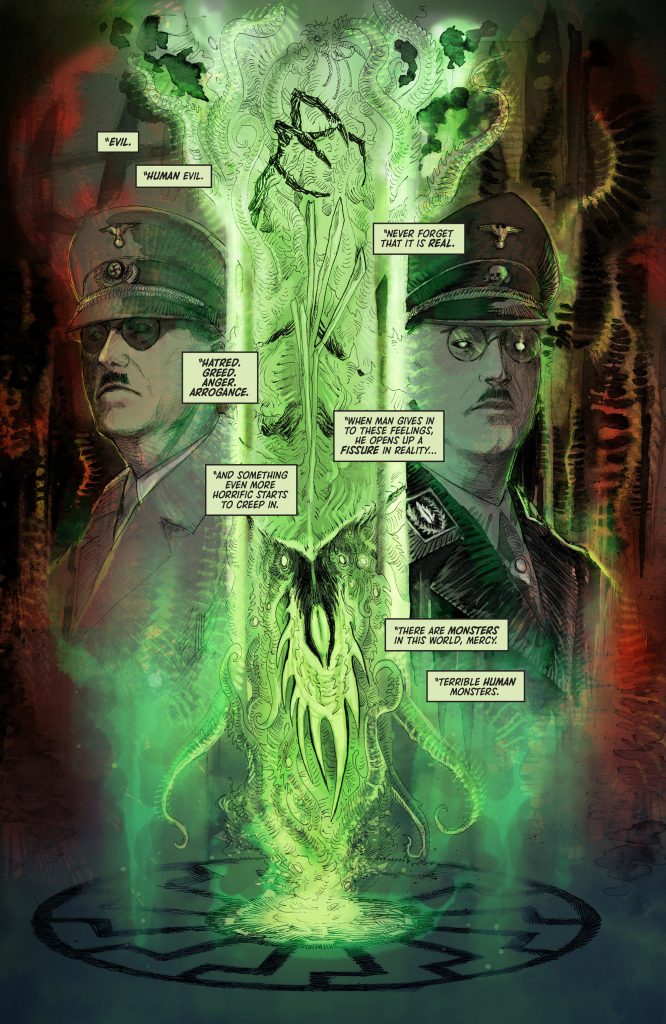 FS: The first issue feels very lived in and thoughtfully crafted. What is the genesis behind the series?

AJH: Richard and I had worked on Elephantmen issue 72 previously. But it was in the summer of 2016, just as I was drawing the pages for Elephantmen, that we started discussing the ideas that evolved into Ask for Mercy. To be honest the monsters in the series had invaded my dream of flying around my house and my boss from work was yelling at me for some reason — because I was flying? — I dunno. But anyway, these insect-like wraith monsters appeared right in the middle of the dream. I had to tell Richard about it, and fortunately he was over in the UK that summer so we met up in Leeds to. And that’s when he pitched the original idea of monsters hunting monsters. The idea of setting the first arc in the Second World War came after those initial conversations, but I enjoy the period backdrop, It allowed me to be very creative. The Sieggiests are definitely one of my favourite designs for the series. 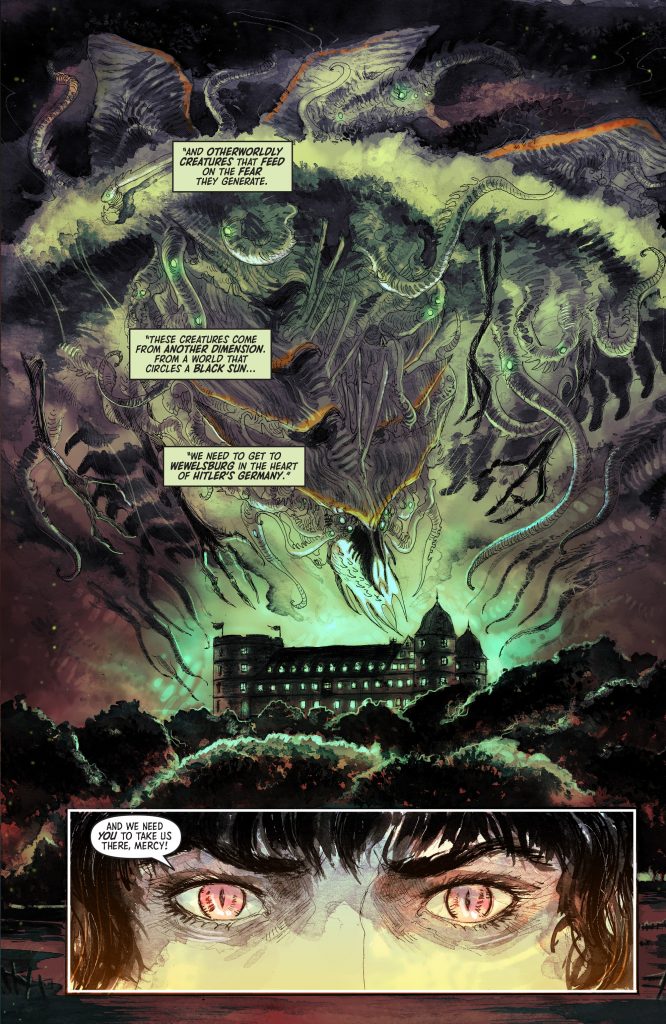 FS: I don’t believe I’ve ever encountered a real estate agent as a main character in a comic. What can you tell us about Mercy, the main character of the book?

RS: Well, what DO real estate agents do in their spare time, hmm? Have you ever though that? [laughs]

AJH: And she’s not really the best real estate agent out there, is she? Sure, she has a flashy Jaguar XJS that embodies her achievements, or at least what she wants people to think she has achieved. But Mercy likes to make out to others that she is living the best life and that all is fine, in the hopes that her life will somehow turn out better.

AJH: Yeah, social media allows us all to put certain emphasis on how we present ourselves… we make out to others that we are living the best life and that all is fine, when really we are only just getting by, having conflicts with loved ones and screaming on the inside because life is just not going the way we want it.

RS: As Mercy’s story unfolds, we start to see that the empty shell of the life she was living is exactly that. In issue #4 we get to learn a lot more about who she is and where she came from. It’s some of Abigail’s best art to date! 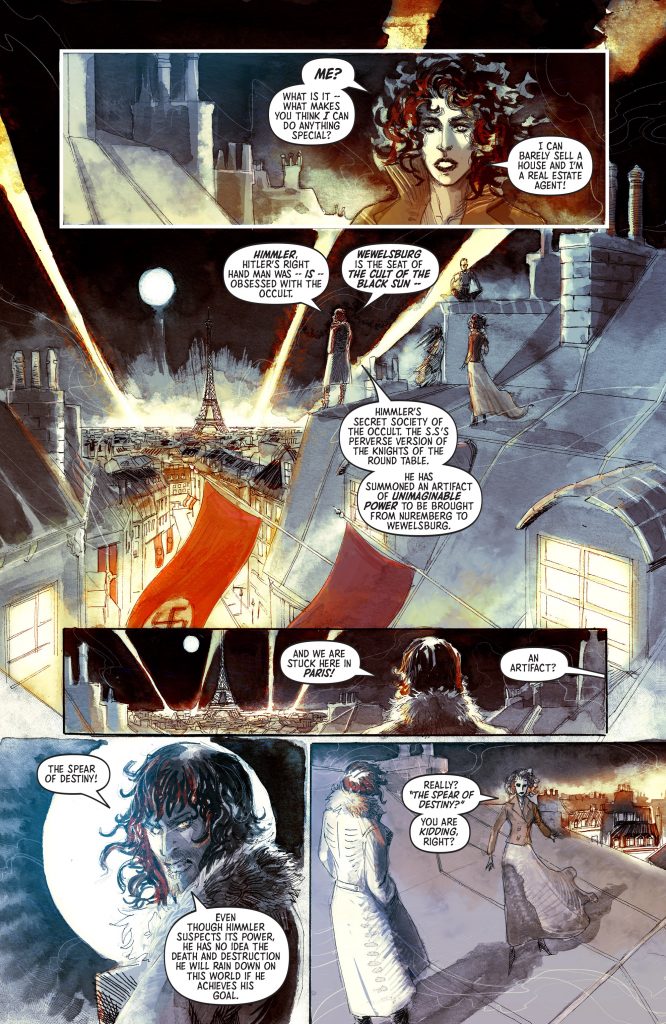 FS: Following up on that, Mercy seems relatively unfazed by the fantastical creatures and teleportation she’s experienced in the first issue. Does that give us a clue as to her inner character and who she is in the wider world of the series?

AJH: Possibly…  Maybe. [laughs] It’s a really interesting set up because we are exploring her character as we work deeper into the story and how everything fits together around her. Let’s just say she’s pretty special — especially to some individuals.

FS: The first issue wastes absolutely no time getting to the action and get the plot rolling, while still keeping your cards close to your vest. Comics have becoming more and more decompressed over the years and this feels like a nice middle ground.

AJH: It’s great that you spotted this. Richard and I cite manga in a lot of ways as an inspiration. With some weekly issues being only about 15-18 pages long. The plot still progresses and evolves but still manages to keep a controlled pace throughout.

RS: In Elephantmen, I spent more than 90 issues developing the world and the characters, sometimes at the expense of action and adventure. In Ask for Mercy I wanted to just jump right in and let the world and the characters develop along with the story and the action. I’d seen a lot of Abigail’s artwork before starting on the series and I wanted the story to capture the scary/monstrous/beautiful energy of her imagination. Mercy herself is very similar to the character of Yvette in Elephantmen, a very, very compelling character always ready to take things into her own hands, whether by accident or design. I killed Yvette off – twice –and still missed writing that character, so Mercy owes a lot to Yvette. 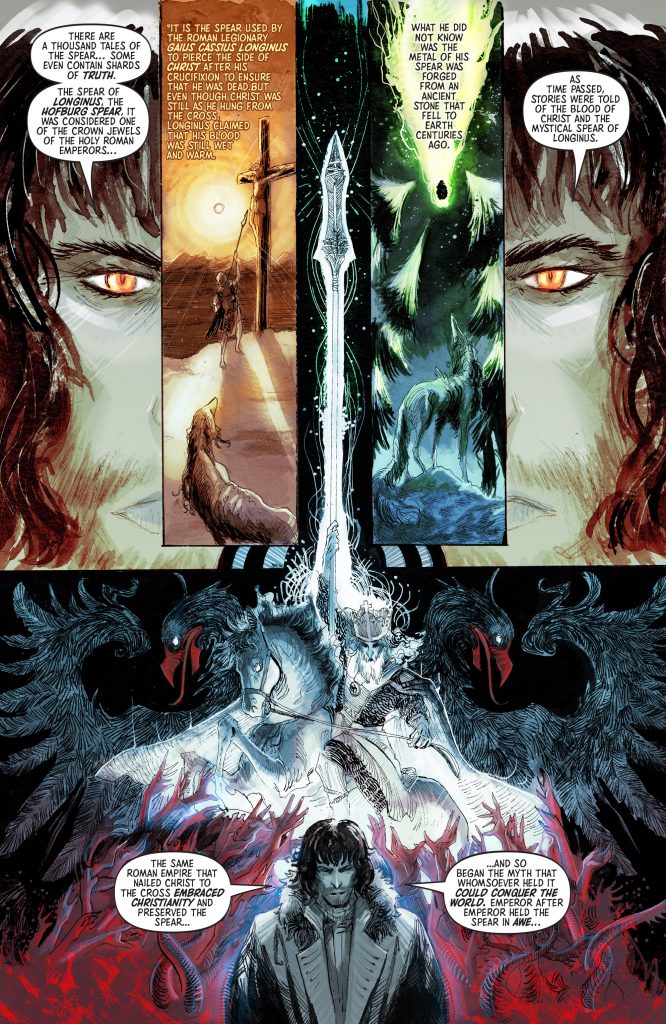 FS: You play with the notion of real estate, both in our world and the world through the gate. You also discuss perception and how we present ourselves: how Mercy presents herself to clients versus who she truly is, and who she might be beyond the gate. What drew you to addressing our notions of reality for this book?

AJH: I think it was a mixture of personal experiences that drew in these themes to be honest. Presenting a world that is not untrue. It’s what grounds the book and Mercy as a character, the day-to-day problems we face in society — the good and the bad things. It’s always easier to relate to a character when the world around that character is believable, even when you throw fantastical and bizarre creatures into the mix. There is a connection there with the readers.

RS: Mercy is very much a character that Abz and I have both known in our lives, so she comes to life quickly and easily because we feel that we know her and I think readers get that too. In just that first issue she meets this new bizarre collection of people with fantastical abilities. Because she accepts them, we accept them… she drinks cappuccinos in Café Nerro, how could you not like her! [laughs] But, yes, there is a lot more to her than you see on the surface… keep reading!

FS: The visuals of the book are alternately gorgeous and haunting. What was the collaboration like deciding how you wanted the look of the comic to be?

AJH: From the start we knew Ask For Mercy would be a horror book.  It was always going to look creepy regardless of anything else. Everything that graces my imagination ends up warping into some sort of horrific reflection of reality. I wanted to draw World War II aircraft in this book and look what happened – Messerschmitt monsters! [laughs]  Even though the monsters in this book was somewhat borne from that really vivid dream I had, pretty much all the projects I’ve done so far have had a horror flare to them. I can’t really help it, I can’t draw cute unless you could see Budgie as adorable. Which I totally do, he’s such a babe. But Richard has been happy to play on my strengths of the macabre and the transformative themes that seem to always inform my work, Richard wrote the issue of Elephantmen I illustrated to my strengths.

RS: Yeah, it’s the Hammer Horror issue of Elephantmen! I grew up watching TV shows like Secret Army, Enemy at the Door, and Colditz on British TV. And shows and movies full of monsters like Doctor Who, Star Trek, Dracula, Frankenstein… and its no secret that Abz and I are both big Doctor Strange and Steve Ditko fans… Ask for Mercy is like a big mash up of all those things, filtered through Abigail’s unique art style. 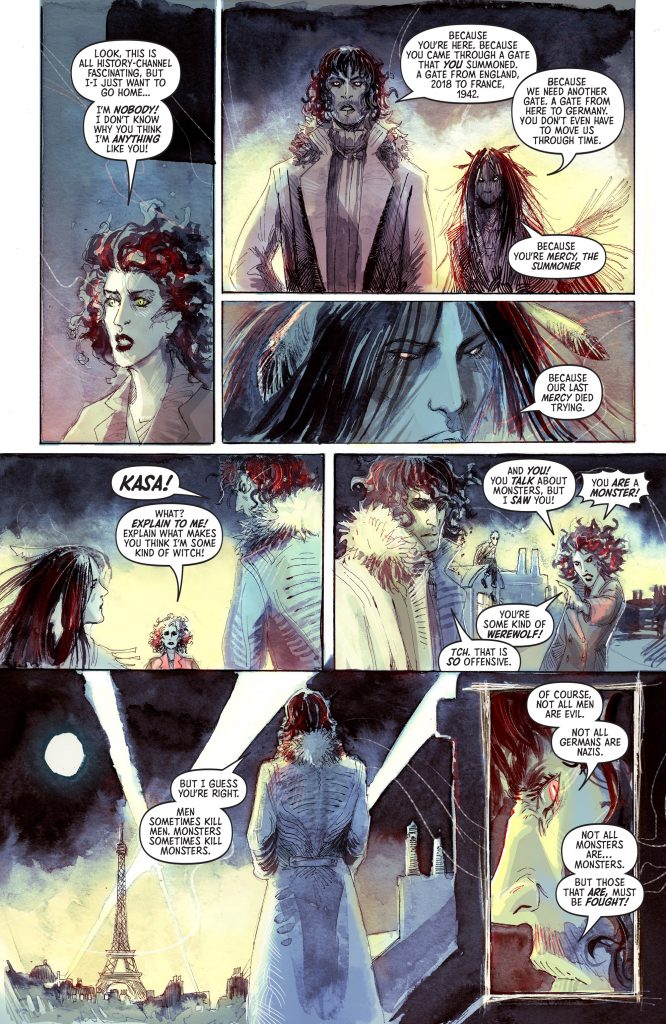 FS: Is there anything you can tease about what we can expect to see next issue?

AJH: If I could tease anything, I would say that issue #3 features the scariest pages of art I have had to draw to date. Possibly ever.

RS: Monsters! Monsters! Monsters! As I hinted at earlier, issue #4 explodes the world of Mercy and Alizarine, the mysterious character we were briefly introduced to in #1. We learn more about the insect-like creatures our misgotten band of monsters have been fighting, where they come from and what designs they have on our small blue-green planet. Can Mercy trust her new friends? Can she even trust HERSELF?!?!

Ask for Mercy #3 (of 6) goes on sale Wednesday, August 8th, as part of the comiXology Originals line.

Issue #3 of the action-packed and artistically stunning dark fantasy story from Elephantmen creator, Richard Starkings and breakout talent, Abigail Jill Harding, making her series debut. Ask For Mercy is a World War II fantasy horror story in the tradition of John Carpenter’s The Thing and Sandman. Mercy is snatched from her own place and time to join a team of Monster Hunters who are actually Monsters themselves, and together they have to take on a Pantheon of Hideous Creatures summoned to our world by Nazi evil!

Part of the comiXology Originals line of exclusive digital content only available on comiXology and Kindle. This title will be available as part of comiXology Unlimited, Kindle Unlimited and Prime Reading on release.