Aurora Sexton has been performing since she was 13-years-old. The Colorado native has become a well-respected name in female illusion entertainment, for both her performance aesthetic and her form of black comedy. In addition, Ms. Sexton has spent a good portion of her career participating in pageants, earning titles such as Miss Renaissance and National Entertainer of the Year. With that background, it’s no surprise that she was recently crowned Miss Gay USofA for 2017.

Ms. Sexton was kind enough to speak with me about the road that led to her becoming Miss Gay USofA, her process when crafting her signature looks, and how being Miss Gay USofA has allowed her to become more active in causes tied to the LGBTQ community. 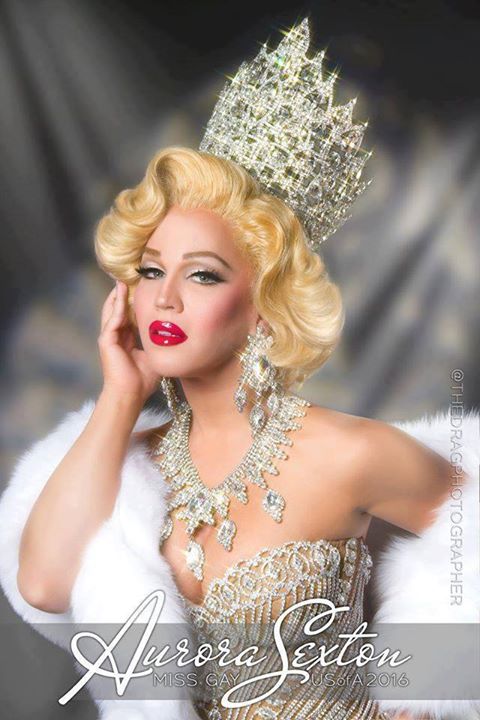 FreakSugar: First of all, congratulations on becoming Miss Gay USofA back in May! What was the process like and the road to becoming crowned?

Aurora Sexton: You have to qualify through a preliminary pageant. When you qualify, the winners and first runner-ups go to nationals. Pretty much from the moment you qualify, you start getting ready. And if you’re really serious about winning, you get ready way before that. [laughs]

So it takes a long time, typically. When I’m getting ready for a national pageant, I’ll start a year in advance. We got ready in six months, but I honestly wasn’t planning on competing at all. I got dragged into it by a group of friends, but I’m glad I did it because it’s been an amazing, life-changing experience.

I have a documentary series that’s been filming since I was getting ready to compete for Miss Gay USofA on YouTube called US of Aurora. The first two episodes are me preparing for the contest, winning the contest. Every episode after that is me on the road, going to preliminary contests, and what’s going on in the cities I visit: what charities are being led by LGBTQ people, what’s good to eat, where’s good to dance. There’s a lot you get to experience on the road when you win a title like this.

You get ready as soon as possible, cross your fingers, and pray. [laughs]

FS: As Miss Gay USofA, what are your responsibilities while holding the title?

AS: The only responsibilities you’re bound to contractually are to represent the crown in a dignified manner, go to all of the preliminaries, crown all the winners. But one of the deciding factors for me entering the pageant is that I wanted to do more with it. I wanted to do more activist work. The owners [of the pageant] told me I’m the most activist Miss Gay USofA they’ve had in a long time.

First for the first few months, I think they were scared about what I was going to do. It’s a pageant for entertainers and not everybody in the entertainment industry is an activist or wants to take on the role of an activist. It’s often not glamorous work to do. You often have to have a thick skin and have the stomach for dealing with some of the issues in our community.

I used to be about just being a glamour showgirl and living that kind of life. But eventually you see too many things. There’s a sense of calling to do that kind of work. I have a lot of friends who have spent a good chunk of their lives helping others. And I think that with a title like this and a platform like this, if you have the opportunity to do activist work, you should take it.

FS: And since the Orlando Pulse shooting, you’ve really thrown yourself out there, raising money for the victims and the victims’ families. That’s really inspiring to see.

AS: I appreciate that. That was really hard. That happened two weeks after I won. You see stuff like that on the other side of the world and it doesn’t register. It’s horrific when it happens there. But when it happens to you and people you know… I was at work and we were closing up and my boss runs in to tell me what’s going on. We thought it was a gang shooting or some drunk got in a fight. But then we watched it unfold into what it did.

As horrific as it was, there were who were coming out after saying, “Oh, they were gay, they deserved it.” Or “I wish it was more.” Things like that. It really unmasked the hatred that is felt toward LGBTQ people and for no other reason than they’re living their lives.

Hate is hard. And a lot of it comes from ignorance and not knowing people. And now that a lot of trans people have gained so much visibility in the last couple years and some people don’t know what that means. You see that in the rise of the bathroom bills [that would require transgender people to use the bathroom that corresponds with the gender or sex assigned at birth]. They’re getting ready to reintroduce one in Tennessee. We helped fight the one in North Carolina. I directed my first viral campaign that got three million hits. We just went in the bathroom to show how stupid is.

If you can liberate ignorance in just a couple minds, I’m willing to put myself out there.

FS: Your style is indelibly gorgeous and wholly your own. What’s the process like when you approach a new look or character idea?

And I think it also comes down to taking pride in your work. I make most of the garments that I wear. When it comes to competition pieces or pageants, I’ll always go to people because it’s easier to mentally focus on the task at hand when you don’t have to worry about making the garments yourself.

I always rooted for the Disney bad guys. The villains always dressed so much better. [laughs] They could always do cooler things than the good people could. [laughs] 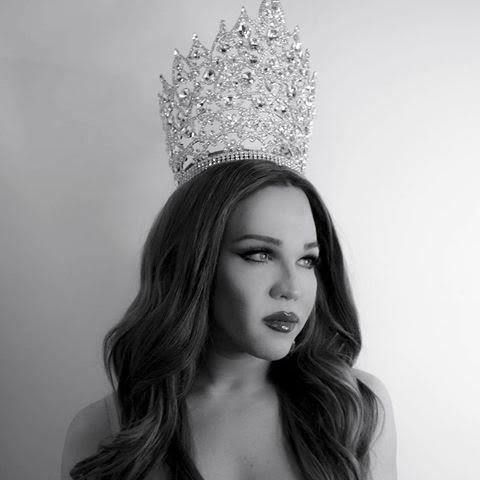 FS: Do you have any projects can you tease coming down the pike?

AS: Right now, the main project is the documentary series I’m filming this whole year and that will end when my reign ends. I hope it goes on to other things and opens more doors. I’ve been pursuing acting in film and television the past few years. I’ve been going on a lot of auditions and hopefully things are panning out. I’ve been invited to do an event in New York with [actress] Cate Blanchett next month, so that’s exciting.

I’ll also be doing some cruise events next year. I have a Cuban cruise in December I’ll be performing on. And if anyone would like to become involved with Miss Gay USofA, you can go to www.usofa.org for more information. If you would like to attend the national contest, it’s Memorial Day weekend in Dallas, Texas. You can get information and tickets on the website.

Creative, outrageous and original are just a few words used to describe Aurora Sexton. A Colorado native, Aurora has spent the last decade touring the United States thrilling audiences coast to coast with her celebrity illusions, drop dead beauty and personal brand of black comedy that always pushes the envelope of morality, decency and taste.

With a background in theater and art, Aurora puts a lot of focus on detail when it comes to her music, costumes and performance making her a respected and nationally celebrated name in female illusion entertainment. Much of her early career was spent competing in national pageants and contests where she was crowned Miss Renaissance, National Entertainer of the Year and was a top 5 finalist at Miss Continental among many others. In May of 2016, Aurora was crowned Miss Gay UsofA 2017.  She has since been touring the country and filming her hit YouTube series, USofAurora.

Her future plans include world travel, a return to professional theater and several television/commercial projects. Currently Aurora can be seen entertaining every month at PLAY Nashville and Kit Kat Lounge in Chicago.