As a movie, the earnest sci-fi parable Automata doesn’t quite work. But man, that production design is killer.

Visually, Automata might be one of the most perfectly-realized science fiction movies of 2014. Imagine a world where technological innovation took several strides forward around the time that the beeper was a big deal. Borrowing the crush of Blade Runner’s cramped super metropolis, with form factors and design of late 70’s and early 80’s science fiction novels, with the sound off, director Gabe Ibáñez’s film offers the same thrill of first seeing Alive in Joburg.

If only it had half as much to say as Blomkamp’s short film: while Ibáñez production designs the hell out of his movie, the story – about emerging artificial intelligence and the insurance investigator out to stop it – is underdeveloped in a wildly miscast science and terribly sincere science fiction parable.

Now, it’s not that Antonio Banderas is bad as burned-out ROC robotics insurance man Jacq Vaucan, but you can see him struggle to bury his natural energy and charisma for about the first half of the film. Trapped in a dried out, walled-in mega-city, with a baby on the way, Jacq feels trapped in his grubby life filing claims for mishaps involving his company’s ubiquitous helper robots.

ROC’s robots operate under two principles (and I’m paraphrasing here): “don’t cause harm to humans” and “don’t modify or self-repair.” We’re told this latter commandment is a great, big deal, hardwired into every bot with some kind of quantum encryption that can’t be broken by the many after-market modders out there tweaking the original programming for new work like construction or (improbably, given their design) prostitution.

Of course, Ibáñez’s script – co-written with Igor Legarreta and Javier Sánchez Donate – wants us to imagine it’s a big mystery how and why robots are starting to self-modify and do all kinds of non-robotic things. Poor Jacq gets drawn into it as ROC attempts to cover its butt with sentient machines on the loose, and they want to know who’s responsible for the modifications. And if you could seen the ending telegraphed from the first time Jacq’s very pregnant wife conjures up Dr. Malcolm, then you get a prize. 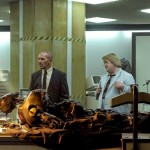 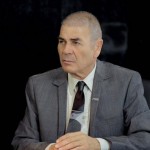 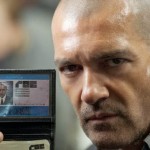 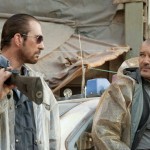 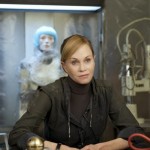 A trip into the radioactive wasteland beyond the city’s walls allows Automata some time to feel like it’s about to do something new before tilting into a slow-moving chase movie. With chatty contract killers on his trail, Banderas gets to flesh out Jacq out in the desert as he gets to know a group of self-modifying bots. These deliberate bits of the film feel like its silliest and strangely, its best.

Melanie Griffith is along for the ride as a brilliant robotics expert which isn’t a phrase I’d ever thought I’d be typing. She never feels like she’s doing anything more than reciting lines, and never gets into the weird fun of playing a lady who makes sex bots for money. Poor Robert Forster was apparently told to play the role of Jacq’s boss and friend with unswerving hangdog bafflement – he’s sad until later when he does something stupid. Tim McInnerny’s cartoonishly evil corporate boss and Dylan McDermott’s drunk, corrupt cop fill out the antagonist side of the film, but while Automata tries (with limited success) to flesh out its robotic characters, its paper villains never feel recognizably like people.

Part of this comes down to a choice that I love and that’s just not really workable. In the moderately-sized cast, we’ve got a ton of different accents and nationalities at play and Ibáñez never gets a handle on the rhythm of each actor’s performance. Banderas is the only performer immune to the issue, but everyone else kind of rushes through their lines or can’t quite figure out the pacing for their speech (McDermott spits his lines out like a 40’s gangster – it’s bizarre that no one told him to stop). 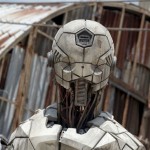 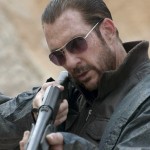 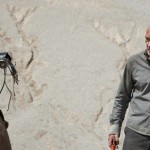 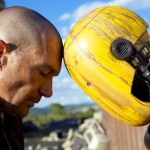 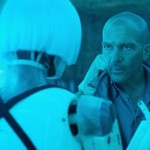 But that world! I can’t forgive Automata for having very little to say, but I can love the look of it. From the city with skyscraper-high holograms dancing in the distance, to an imposing wall manned by snipers to keep wastelanders from even touching the city’s scraps, this movie feels wonderfully occupied – even as that world struggles to be about something.