The Marvel Comics team The Thunderbolts made their first appearance 25 years ago this year, exploding on the scene from writer Kurt Busiek and artist Mark Bagley, instantly pulling in readers with its concept of villains pretending to be heroes for nefarious ends. And as much as the team has zeroed in on that villainy over the team’s various incarnations, it has also focused on redemption and the idea of changing oneself. Can a villain ever be reformed? Can the past ever be put behind? What is the value of second chances? 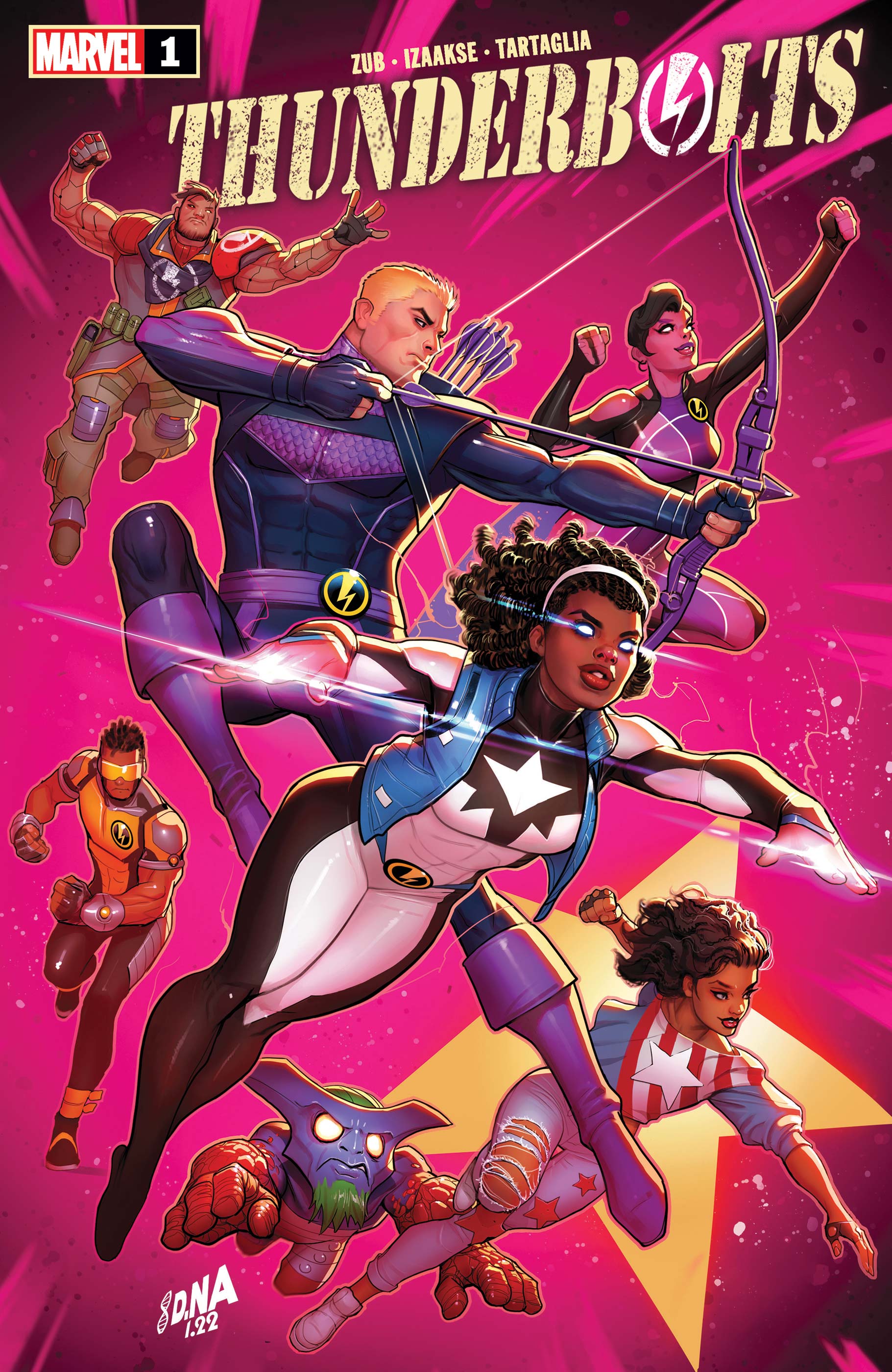 Jim Zub: Thunderbolts was one of those titles that stood out in the 90’s because of the strength of its core concept, villains disguised as heroes, and the quality and consistency that Kurt Busiek and Mark Bagley brought to the series.

Getting the chance to write Thunderbolts in 2016 with the Winter Soldier leading the original team line-up was a thrill and getting to come back again in 2022 and introduce a new iteration of the team after Devil’s Reign is even more special.

FS: How did you become involved with this newest series?

JZ: I had been talking to Editor-In-Chief C.B. Celbulski about different possible projects and this idea of a team arriving after Devil’s Reign came up. Given the way that Wilson Fisk used the team name during his tenure as Mayor of New York, it made sense that both Luke Cage and Clint Barton would want to reform the name. Building off that foundation and the New York homebase for the series, the new team started to come together.

FS: Hawkeye is leading the cast of this newest incarnation. He’s been a team leader before. Why did you look to him again for that role?

JZ: Hawkeye’s having a bit of a mid-life crisis right now. He wants to get himself back to a time when he was happy and felt in control of his life, so his pining to return to his West Coast Avengers days. Getting the chance to lead the new Thunderbolts is a step in that direction, even if it’s not quite the one he would have made for himself. 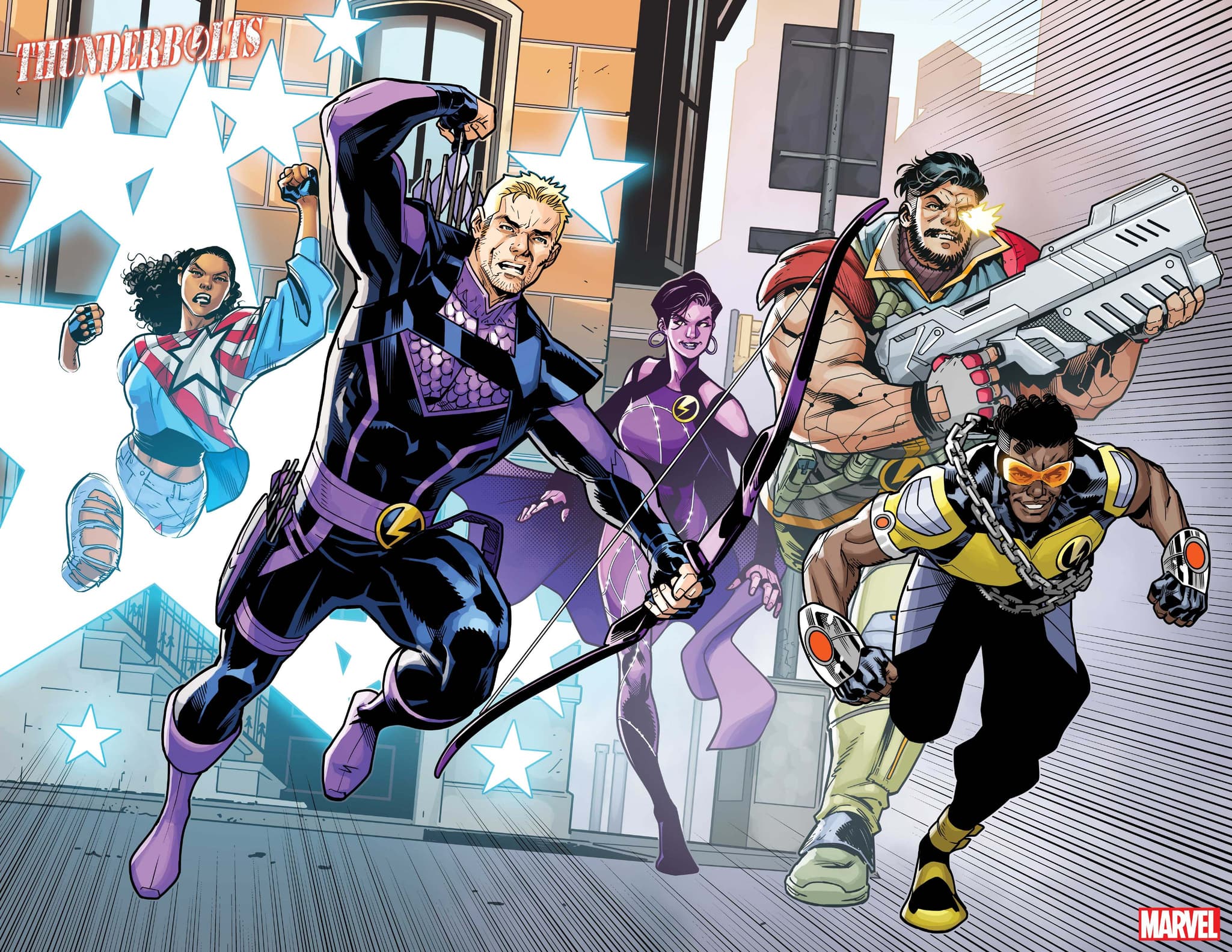 FS: This new title spins out of the Devil’s Reign event. Where do we find The Thunderbolts at the beginning of this new book?

JZ: The new Thunderbolts are trying to clean up the mess created by the previous villainous team, impress Luke Cage and balance their budget. It’s a real tightrope they have to walk.

FS: The cast of the series has a mix of familiar characters and brand-new ones. What can you tell us about who we’ll meet on the team?

JZ: Monica Rambeau was approached to lead the new Thunderbolts, turned down the job, but has been pulled into the mix anyway.

Victor Alvarez wants to prove himself as the new Power Man and Luke Cage doesn’t want his old name squandered.

Kara Kilgrave knows she can’t escape the legacy of her evil father, especially with her bright purple skin, so she’s determined to be known as a hero and celebrity.

America Chavez is recovering after her recent mini-series and is struggling with fluctuating power levels.

Gutsen Glory is a new character, a cyber-soldier with a mysterious past.

FS: The team working on the book is stacked with all-stars. What’s the collaboration process been like?

JZ: [Penciller] Sean Izaakse and [colorist] Javier Tartaglia and I have all worked together before, so it’s been a pleasure diving into this series with them. Sean’s storytelling and design are as strong as ever and Java’s colors really make it all pop.

FS: The Thunderbolts have gone through several incarnations, but there’s always been an appeal to the concept in all its iterations that bring readers back. What do you think that appeal is and why do you think the concept has persisted?

JZ: At the heart of each iteration of Thunderbolts is the idea of “redemption” and that’s a big part of our story here, channeled through several angles via our cast of characters.

FS: Following up on that, what does writing for the Thunderbolts characters allow you to do as a creator that you might not get to do otherwise?

JZ: The Thunderbolts feel like the kind of team where we can explore flaws more fully than in something like the Avengers. These characters are fighting to prove themselves and fighting against their worst instincts. There is a lot of humor and pathos in that.

FS: Is there anything you can tease about what we can expect in the book?

JZ: When I pitched the story to C.B. and Tom Brevoort, I called it “Avengers by way of Ted Lasso” and that’s a pretty good summary. Lots of heart and character comedy, but also superheroism in the Mighty Marvel manner.

Thunderbolts #1 is on sale now from Marvel Comics.

…LIKE LIGHTNING! Super-powered crooks have taken hostages in Staten Island? A dimensional rift tears open in Chinatown? Monsters running amok at the Met? Call in the THUNDER! New York City’s finest are here to save the day — Hawkeye, Spectrum, America Chavez, Power Man, Persuasion and Gutsen Glory! You know ’em, you love ’em…they’re the Thunderbolts! In the aftermath of Devil’s Reign, the Big Apple has big problems, and it’s up to a new group of Thunderbolts to turn things around. But when Clint Barton gets tasked with heading up this team and proving they can go toe-to-toe with anything the Marvel Universe can throw at them, the first opponent he’s going to have to face is himself.