There’s something to be said for waiting.

Since the first Avengers film in 2012, audiences had been anticipating Steve Rogers/Captain America (portrayed by Chris Evans) to exclaim “Avengers assemble!”, his famous rallying cry from the character’s comic book adventures. Fans didn’t get that moment in that movie and director Joss Whedon teased us with it at the end of 2015’s Avengers: Age of Ultron, cutting to the credits just as Cap was about to say the full line.

Cap almost sounds the cry in AGE OF ULTRON

However, with the release of 2019’s Avengers: Endgame, the culmination of 11 years’ worth of films from the Marvel Cinematic Universe, folks expected that this would be the movie that would give viewers the moment they were waiting for, with Steve summoning Earth’s mightiest heroes with that famous cry. Not only was this the conclusion to the tale set in motion in the first Iron Man installment in 2008, but it would be the final time the characters would be together onscreen, with Evans and Robert Downey Jr. (Iron Man) not renewing their contracts with Marvel Studios. With Endgame, it was now or never.

And Evans, along with directors Anthony and Joe Russo, certainly delivered. 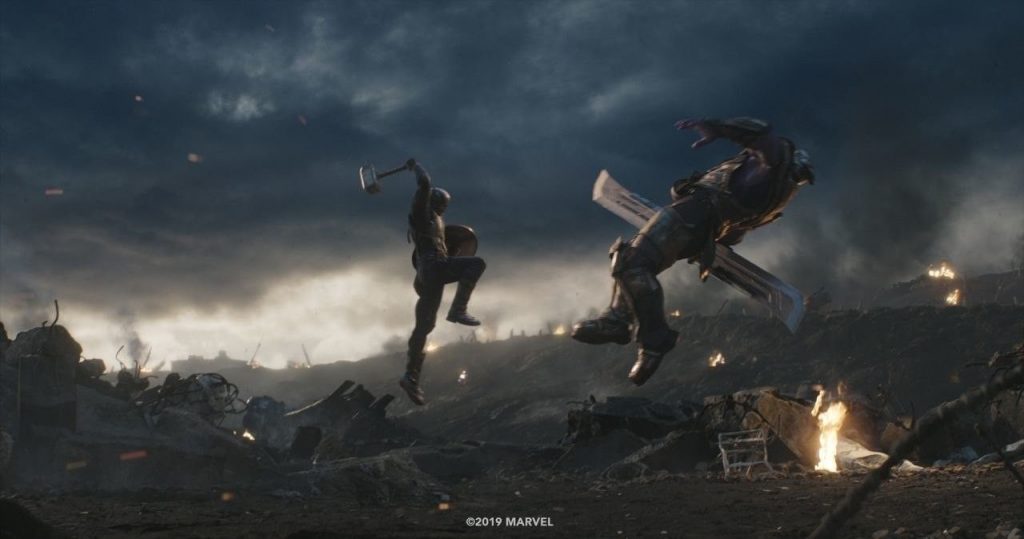 Before Endgame brings us to that cry, however, the Russos do a fair amount of necessary buildup to that moment. Steve finally wields Thor’s hammer—a payoff to a setup stretching back to Age of Ultron—against Thanos, although he’s still unable to stave off the threat of the mad Titan. Strapping his shield onto a broken arm, Cap stumbles alone—his other Avengers comrades missing or beaten—toward a gloating Thanos who is flanked by his horde of sycophants rivalling any seen in the Lord of the Rings saga. At that moment, Steve is who he’s been since that first alley fight in Captain America: The First Avenger, facing a situation that he know he’ll lose, but doing it anyway.

As he told Dr. Erskine in The First Avenger, “I don’t like bullies. I don’t care where they’re from.”

But Captain America isn’t alone. As he stumbles, bloody and tired, toward what is certain to be his death, he’s stopped by a scratchy voice coming in from his earpiece; it’s the Falcon, alerting Steve “on your left.” One by one, Cap is rejoined by his formerly fallen comrades, from Spider-Man to Groot to Black Panther, coming through dozens of portals created by Doctor Strange and his fellow magicians. As each portal opens, you can see Evans acting the Hell out of the scene, a mixture of joy and relief and reinforced resolve washing over his face. You can’t help but smile at the gratitude Cap’s exuding: happiness to see his friends alive and hope that the Avengers and the hundreds of Asgardians, Ravagers, and others who have joined them. Where once there was one, there are many and they are ready to come together; to assemble.

As Alan Silvestri’s rising score mixes with the voices of the gathered heroes, the scene almost becomes silent as Captain America cries, “Avengers!”, followed by a quiet “assemble.”

Filmmakers and critics may deride the excesses of superhero cinema, but for fans who have followed the Avengers for over a decade on screen, this was the culmination of a beautifully told, intricate story of heroes they have rallied behind, looked up to, and, in some cases, hoped to be like. When Cap yells, “Avengers assemble!”, many of us felt like he was talking directly to us.

And if that’s not movie magic, what is?