Tuesday was a big night for Republican presidential frontrunner Donald Trump and, unfortunately, for Christie.

When the dust had settled and the votes were counted, Trump had claimed victory in seven of the 11 Super Tuesday GOP primary contests, adding 235 delegates to his already sizeable lead and looking more and more to be the likely Republican nominee for president of the United States.

While the business mogul should have been the focus of his victory speech last night at his headquarters in Palm Beach, Florida, Christie was the man who drew the attention of the media and the electorate. The governor, who, after dropping out of the race as a GOP presidential contender a couple weeks ago, had recently thrown his support to Trump, has drawn the mockery and ire of many, who feel Christie’s move to back Trump reeked of political opportunism. However, after introducing Trump at the celebration last night, Christie stood in behind the mogul, with an expression and a posture that made viewers wonder if something more was at play.

Republican Congressman Justin Amash took to social media to note that Christie’s overall demeanor had the air of a hostage situation, with the hashtag #FreeChrisChristie trending soon thereafter.

No, it's staged to look like a hostage situation. https://t.co/z29OtZcRVy

Memes and tweets clogged the Twitterverse, mocking the governor for his vacant stare that had an air of fear and resignation. 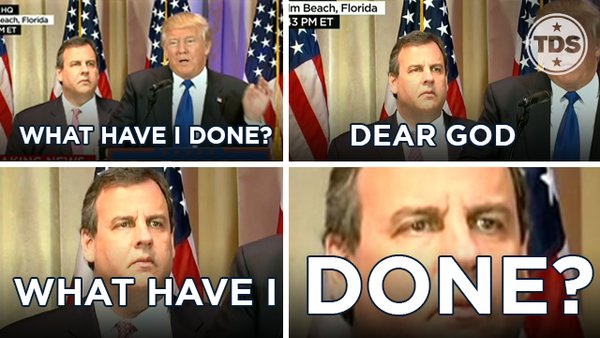 From THE DAILY SHOW

However, not everyone felt that the situation was a laughing matter. This morning, Captain America, field leader and chairman of New York’s Avengers superhero team, alongside his fellow teammates, held a press conference outside Avengers Tower in downtown Manhattan to address the matter of Christie.

“While it might appear on the surface that the governor is acting of his own free will,” the captain began, “his demeanor last night suggests that something more sinister is at play.”

After a pause, he continued. “After an emergency meeting with the entire Avengers organization, we have come to the conclusion that Governor Christie is being held captive by Donald Trump, mentally and/or physically, forced to bend to the candidate’s will for some unknown purpose. Whatever we might think of his politics, the governor is still a citizen of the United States, and we will protect him as we would any other citizen.” 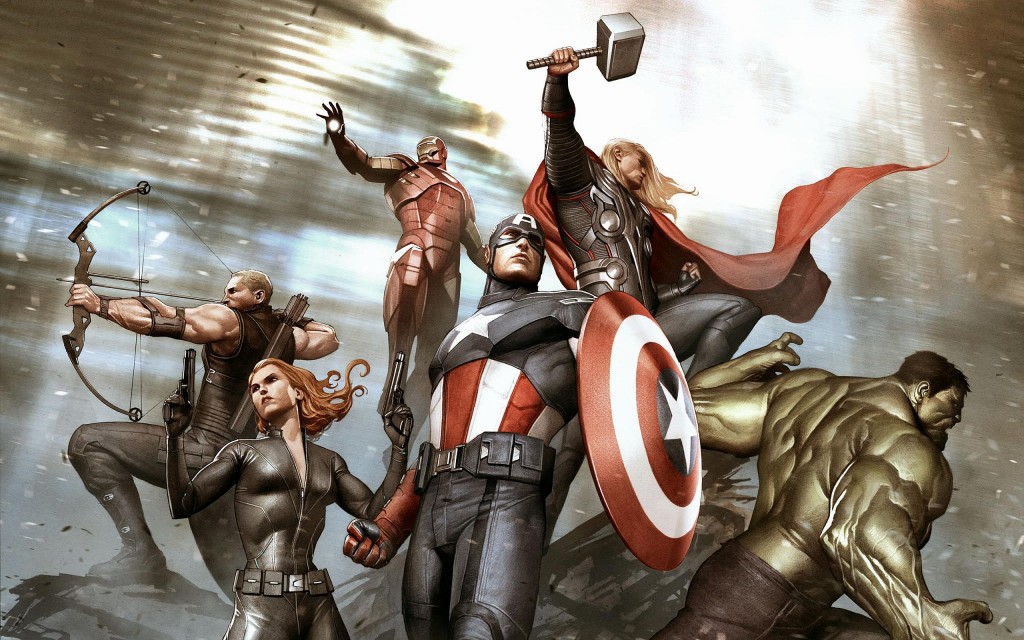 The captain then looked straight ahead, addressing the cameras directly.

“As such, we are now speaking to you, Mr. Trump. You have until 6:00 PM eastern this evening to release Governor Christie, unharmed, or else face the full weight and might of the Avengers at your doorstep. No man or woman—no matter how easily swayed, no matter how mentally pliable, no matter how drunk on the ambrosia of power—is a plaything for your disposal.”

At that point, Tony Stark, out of his Iron Man armor, interjected, “And, look, we know it’s Jersey and all, but Christie’s a person, too, sorta. Kinda,” smiling at winking at the journalists while Captain America rolled his eyes.

“As I was saying,” the captain continued, looking pointedly at Mr. Stark, “at this time, we are uncertain the details as to how or why the governor has been captured and put to heel by Donald Trump. Perhaps Mr. Trump is gathering low-level warlords for when he ultimately makes his move to transform the United States into a dictatorial hellscape. Maybe he plans on using the governor as a henchman whom he’ll use to keep the press at bay. Maybe…”

“Regardless,” Captain America went on, “the governor is an elected official and an American citizen and should be no man’s puppet.”

“Loki!” Thor, the God of Thunder, interjected suddenly, to no one in particular.

The thunder god could be heard muttering, “It’s sometimes Loki…”

Captain America talked over the founding Avenger. “At this time, we are uncertain if the governor is at his mansion in New Jersey or at Trump Tower in New York, but we will be looking into both places for his location.”

Mr. Stark added, “I mean, if we can even get to Jersey. I understand that there’s been some flooding and, on occasion, there’s a matter of crossing bridges there in a timely manner.” The Avenger was referring to the recent criticism around Christie’s response to flooding in New Jersey after the winter storm there earlier this year and the Fort Lee lane closure scandal of 2014.

With that last word, the captain ended the press conference, but not before the incredible Hulk, also in attendance, bellowed to the cameras, “BIG HULK WILL HELP SAVE LITTLE HULK!”

As of press time, it is unclear if any action had been taken by the Avengers. However, an unnamed source did indicate that, after Governor Christie is rescued, the Avengers intended to investigate as to whether the alleged connection between Ted Cruz and the Zodiac Killer had any merit.