In the moving picture shows, the school house perennially has been used as a symbolic battleground for teachers and students, representing the push-pull the seemingly-warring sides engage in as both struggle to understand the other. Movies such as Ferris Bueller’s Day Off and The Breakfast Club do this in a poignant, humorous fashion, while films like Teaching Mrs. Tingle and The Faculty take a more macabre, dark-comedy bent. Bad Kids of Crestview Academy, based on the graphic novel series, seems to take the latter approach. Come for the violence, stay for the message.

While the film looks to be pushing extremes–not necessarily a bad thing at all–Sean Astin’s involvement as the straight man is what’s pulling me in. He’s The Breakfast Club‘s Mr. Vernon with a barely-contained irritation brewing beneath the surface.

Based on the best-selling graphic novel series, a group of spoiled “bad kids” have been placed in Saturday detention at the prestigious Crestview Academy. After one of the kids locks away their teacher, they find themselves trapped in school with no way out, wondering who (or what) set them up. Their ranks quickly dwindle as each falls victim to a gruesome “accident” while trying to escape. 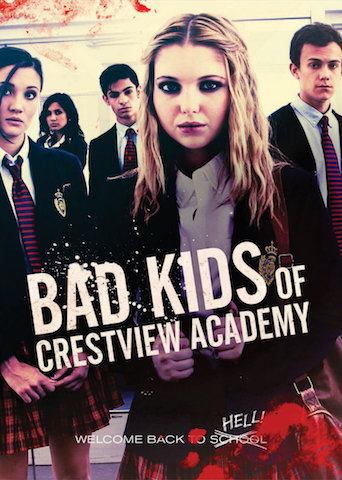