On November 11, nobody bother calling me, texting me, emailing me, Facebooking me, tweeting me, Google+-ing me, Tumblr-ing me, or whatever other time-suck that has been created between now and then. For on that day, Warner Bros. Home Entertainment will release the complete series of the 1960s television series Batman, starring Adam West and Burt Ward! The completely-remastered series, available on Blu-Ray, DVD, and digital, can be yours to buy as the complete series or a special collector’s set, blinged out in all of the bells and whistles and swag that your li’l Bat-heart can imagine. (I just said “swag”. If you see me out, punch me in the arm.) You’ll be dancing the Batusi when you read all of the special features the DVD set includes:

The special edition set also comes with a lot of Bat-memorabilia, including:

Click to get a better look at the set below: 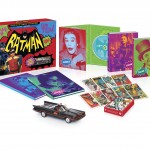 (*Note: I made it through this entire article without making one “holy” joke. *bows*)