Warner Bros.’ Batman v Superman: Dawn of Justice hits theaters in a week and, if the mountains of trailers, clips, and other publicity are to be believed, characters beyond just the Man of Steel and the Dark Knight will be taking the spotlight. Although she doesn’t get billing with the other superdudes, Wonder Woman will show up to complete DC Comics’ trinity of apex heroes. In addition, as the subtitle is Dawn of Justice, we know that Aquaman, the Flash, and Cyborg will be making appearances, all in an effort to give a nod to their future in Warner’s Justice League film a couple years down the line.

However, a whole gaggle of lesser known folks have been making blips and bloops in the trailers released so far. One such character? This lady: Mercy Graves. 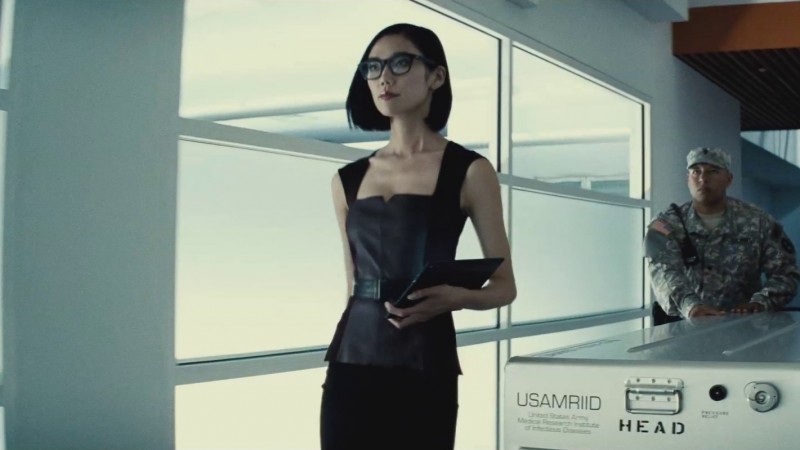 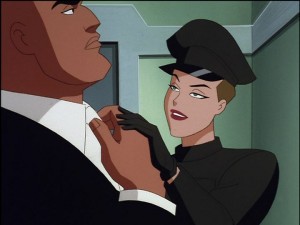 Mercy Graves with Lex Luthor in SUPERMAN: THE ANIMATED SERIES

Mercy, decked out here looking like every idea of a chauffeur you’ve ever seen, actually started out not as a comic book character, but as part of the cast of the Superman cartoon as Lex Luthor’s assistant. Yep, that Lex Luthor. Bald guy. Rich, corrupt. A bit of an unhealthy obsession with and hatred of Superman. That guy. Originally a leader of a gang of female thieves, Mercy attempted to steal a briefcase full of cash from Lex, but, of course, was stopped by the billionaire’s goons. Instead of doing the usual Lex thing and exacting swift revenge, he cleaned Mercy up and gave her a job as right-hand woman, bodyguard, and doer-of-underhanded-awfulness.

However, what was always most notable about the character other than her general toughness and take-no-nonsense attitude was her devotion to Lex and a possible misread of the actual nature of their relationship. Mercy was always respectful of Lex, but never subservient, expressing her opinion when she thought he needed to hear it. That, compounded with the fact that Lex took her in and she bragged that she got away with calling him by his first name, gave viewers the impression that she thought Lex cared about her, something Superman tried to persuade her against.

The worm seemed to turn, though, when Lex failed to save Mercy’s life even when he could have done so with ease. When Lex was in prison in the Justice League cartoon and she took over his company, LexCorp, at his behest, Mercy took this as her time to strike, keeping control of the company later on even after he left prison. His dicketry and verbal and physical abuse were more than she could bear or would continue to take and she snubbed him at the first chance. Sadly, though, it didn’t last and she was later seen acting as his hired help once again. Sigh.

Mercy was later introduced as a character in DC Comics, much like Batman: The Animated Series’ Harley Quinn before her and the Superman radio show’s Jimmy Olsen before either of them. Again, she plays the role of Lex’s bodyguard and is later paired with a partner, Hope. Groan. At one point, it’s suggested she is an Amazon and, at another time, she decides to try being a hero to make up for her past misdeeds. None of any of this makes a whole lot of sense, nor is it nearly as interesting as the emotional relationship stuff the Superman cartoon built. 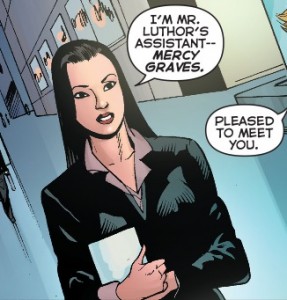 Mercy Graves in the New 52

But all of that stuff was changed when DC rolled out its “New 52” comic book series line-wide relaunch. Now Mercy is Lex’s personal assistant, stripped of all the bodyguard trappings, which is kind of sad. I liked physically badass and mentally badass Mercy as seen in the Superman cartoon. The Mercy seen briefly in Batman v. Superman footage seems to be following the trend set in the New 52. Of course, that appearance was blink-and-you-missed-it short, so it’s hard to say how large a role she’ll play or what her personality will be until we actually see the film. She’s played by Tao Okamoto, who has starred in Amazon’s The Man in the High Castle and was one of the bright spots in The Wolverine, so she’s got acting chops. I’m excited to see what she’ll bring to a role of cunning and no-nonsense like that seen in Mercy.

So, you’re caught up! Now you can be the Empress or Emperor of Awesome when you go see Batman v. Superman with your friends. “That woman?” you’ll say. “Pfft. EVERYONE knows who Mercy is.” And then you’ll wink off-camera to me and give me a thumb’s up. And it’ll be awkward for everyone. So don’t do that.