While progress has been made in the last few decades in the name of women’s equality, it’s no secret that men as a whole have had a terrible record in how they treat women, overtly and in conscious and unconscious ways. The patriarchy has served to keep those in power who would want to keep that power, with no other purpose.

Writer Ben Blacker is keenly aware of that fact and decided that he wanted to use his craft to comment on the current state of the world in comic book form, specifically Hex Wives, his new series from DC Comics’ Vertigo Comics imprint. In Hex Wives, a cabal of men who are fearful of witches and their power use magic to make those women think they are Stepford-style housewives from a 1950s-esque idealized America that never really existed. With Hex Wives, Blacker comments on the savagery men have inflicted on women throughout history—physically, mentally, and socially. Like some of the best sci-fi and horror before it, Hex Wives could stand tall as both entertainment and a teaching tool on how we really need to halt the mistakes of the past if we want to have a human race that is equal, co-existent, and cooperative toward the betterment of everyone.

Mr. Blacker spoke with us recently about the idea behind Hex Wives, how his story formed, why Bewitched and Buffy the Vampire Slayer influenced his tale, and how series artist Mirka Andolfo helped shaped the looks and personalities of the witches. 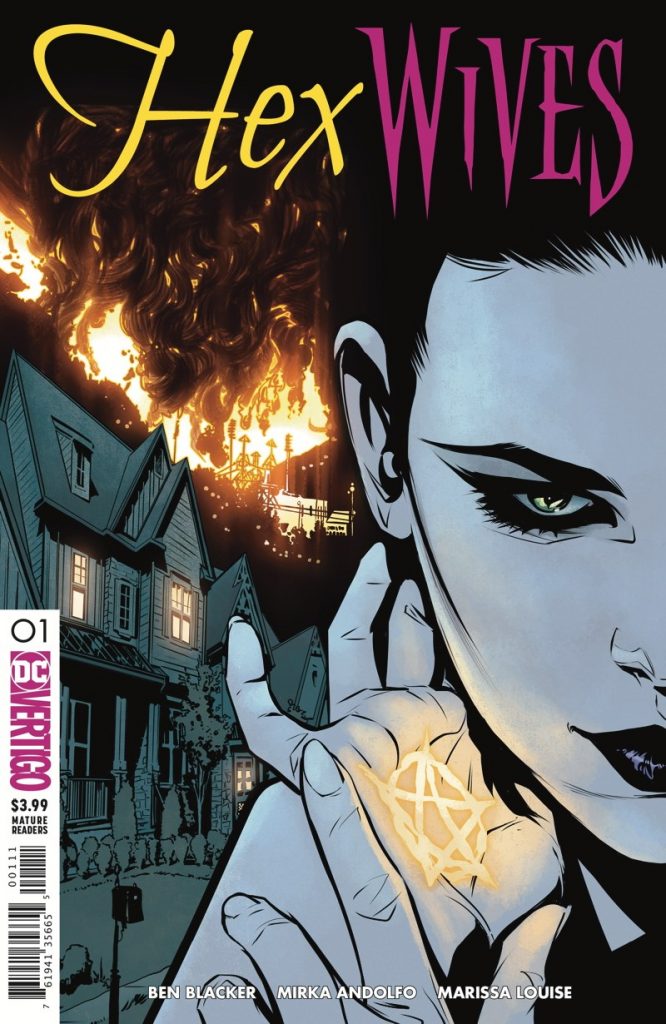 FreakSugar: What can you tell us about the conceit of Hex Wives for folks considering picking up the book?

What it’s really about is a powerful coven of witches who are being held against their will and knowledge by a cabal of fearful men who try to control them. So it’s a documentary about contemporary America. [laughs]

FS: As I was reading this, I felt like it hit close to home.

BB: Part of where this book came from is conversations with my wife and women friends and family who were finally feeling emboldened to talk about the ways they’re in the workplace or relationships or wherever. It’s not always blatant, the ways men try to minimize or control or even define women. It’s not always as what’s in the news right now. It’s a million small ways. I think that a lot of men—myself included—have been blind to and maybe we do it anyway because it’s ingrained in our patriarchal society. 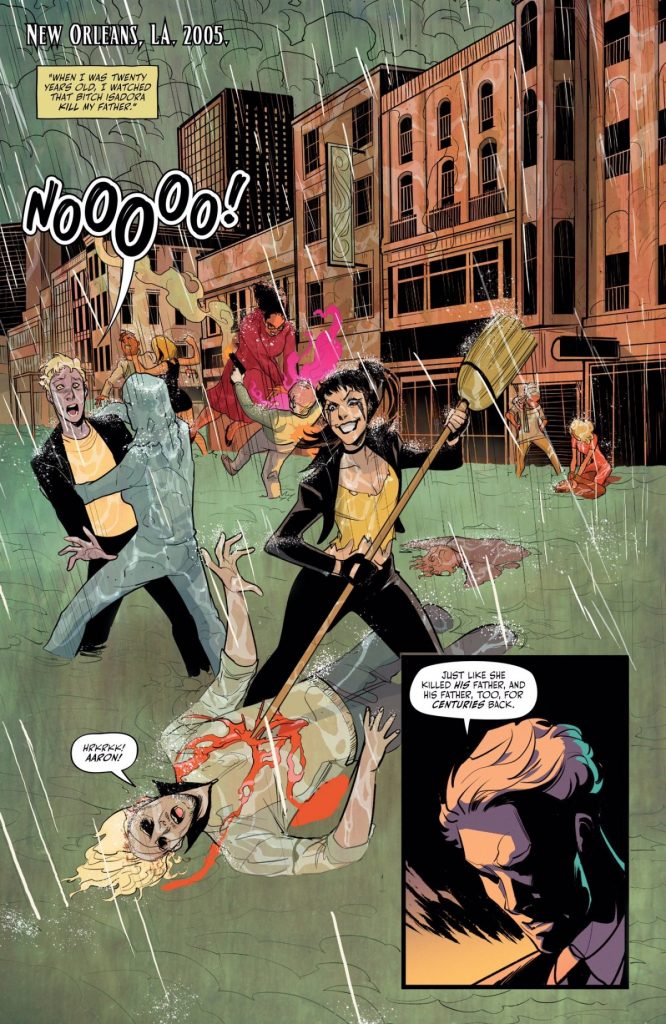 FS: Did the genesis of the story solely come from those conversations with your friends and family or had you always wanted to do a story about the supernatural or was it a combination of the two?

More specifically, I caught an episode of Bewitched on TV which was show I absolutely loved when I was a kid. When I was home sick from school, I would watch it in syndication. I love Elzabeth Montgomery so much. I really dug her mom Endora, who would come to her and say, “You married beneath you by marrying a mortal.” [laughs]

And the episode I happened to catch was a very typical episode. Darren was bringing his boss home to have dinner. She wasn’t allowed to use magic. And when I watched that, I said to myself, “That’s crazy! She is a powerful witch who could be done with all of her chores—chores, first of all, like she’s a child, come on—in one second if she were allowed by her husband. Endora’s right: she totally married beneath her.

So that was the thing I was sort of playing with. And I felt like I learned to write by watching Buffy the Vampire Slayer. As I had these conversations with my women friends and family, I sort of was like, “Oh right, you can use metaphor to talk about the things you want to talk about.” That is one of the things Buffy taught me. That’s where the book came from.

FS: I appreciated that part especially, showing that men have been afraid of women being on a level playing field or even reaching their full potential. It’s like with Darren and Samantha on Bewitched. It’s with the hunters in Hex Wives, remarking what the witches could do at full power.

BB: They’re completely afraid of what women could do if they had their full power. It’s no coincidence that the Architects—the cabal that is trying to control the witches—are all white men. That’s by the design. That’s metaphor hitting you over the head. They’re so threatened that they may not be in control anymore that they create a circumstance where they want things to look and feel they thought once existed. They make it look like this 1950s suburb that we know from television and Leave It to Beaver and Mad Men—where you know that the things that happened there aren’t as pretty and glossy and perfect as they look. 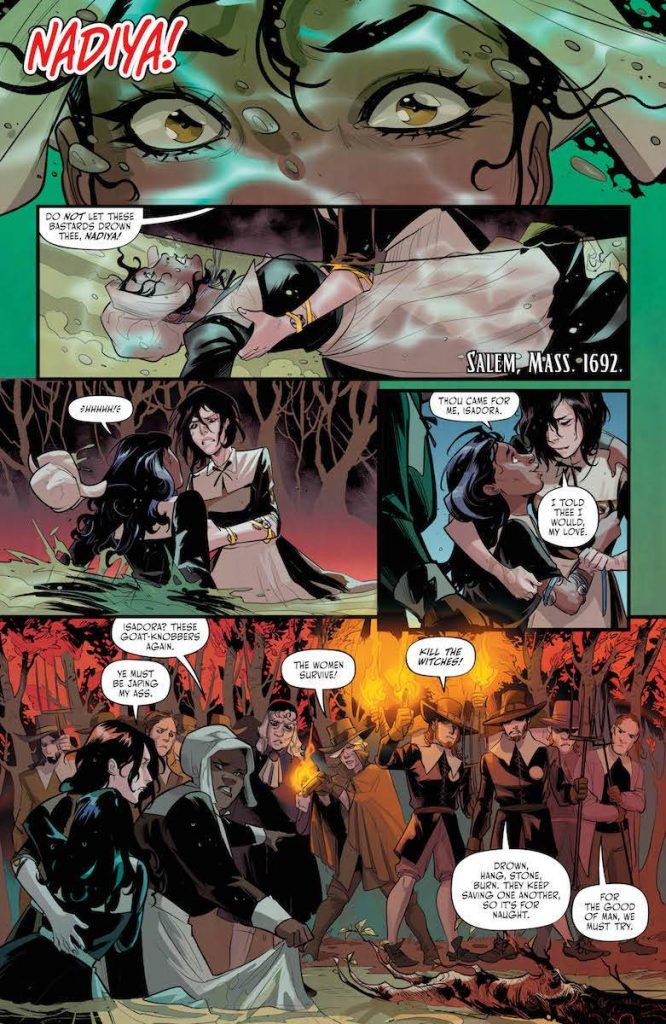 FS: The characters in just the first issue feel so fleshed out. What can you tell us about some of the witches?

When [the series artist] Mirka Andolfo and I got together, deciding what the characters would look like, I said that these are the looks I had in mind. Even if the characters’ personalities aren’t like Samantha or Wendy, the looks should be. It was also important that the characters look different: that they look different from each other. If you see them in silhouette, you can tell who’s who. Mirka loves to draw beautiful women, and she got to draw six beautiful women who are each beautiful in her own way. She brings so much life to these characters. That’s what you’re responding to when you read the 22 pages of the first issue. It’s not just their voices, but they feel very human. That’s a testament to Mirka and series colorist Marissa Louise. 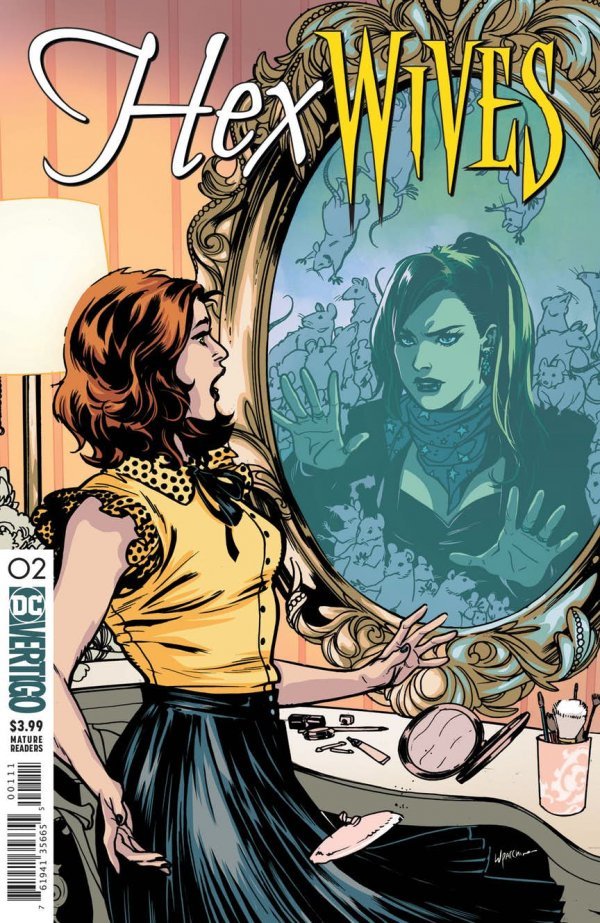 From the official issue description of issue #1:

“The women are too powerful. They must be tamed.”

For hundreds of years a war has been waged between a coven of perpetually reincarnating witches and the all-male conspiracy known as the Architects. After the death of the lead Architect in 2005 it seemed the witches had finally defeated their foes.

Now, 13 years later, waking up in a perfect cookie cutter home at the end of a cul-de-sac in a sunny corner of suburbia, Isadora has no recollection of her past life as the leader of a witch coven, nor her soulmate Nadiya, let alone the centuries-old war she has waged in defense of the soul of America…

The wives of Desert Canyon still don’t know the secret power they possess. Their husbands continue their campaign of insidious manipulation. Izzy hears scratching in the walls. A cat jumps into a cake. Blood is spilled. And the creepiest sex scene in all of comics.