Hellboy, arguably the Bureau of Paranormal Research and Defense’s greatest champion, contended with all manner of figures from myth and legend during his time on Earth, including the ferocious and cunning Baba Yaga. Intent on putting an end to the demon with a fist of doom and a heart of gold, Baba Yaha dispatched Koshchei the Deathless to rob Hellboy of his light and life. Trapped in her thrall, blackmailed with the hope of regaining of his own soul, Koshchei begrudgingly became an enemy of Hellboy, much to Koshchei’s peril.

FreakSugar: For folks considering picking up the book, what is the conceit of Koschei the Deathless?

Ben Stenbeck: Koshchei was first introduced as a villain in Hellboy: Darkness Calls. He’s an extremely powerful immortal. In this series, Koshchei narrates every horrible deed he performed, from how he became the Baba Yaga’s slave and beyond. It’s basically his life story, told to Hellboy as they sit in a pub in Hell. 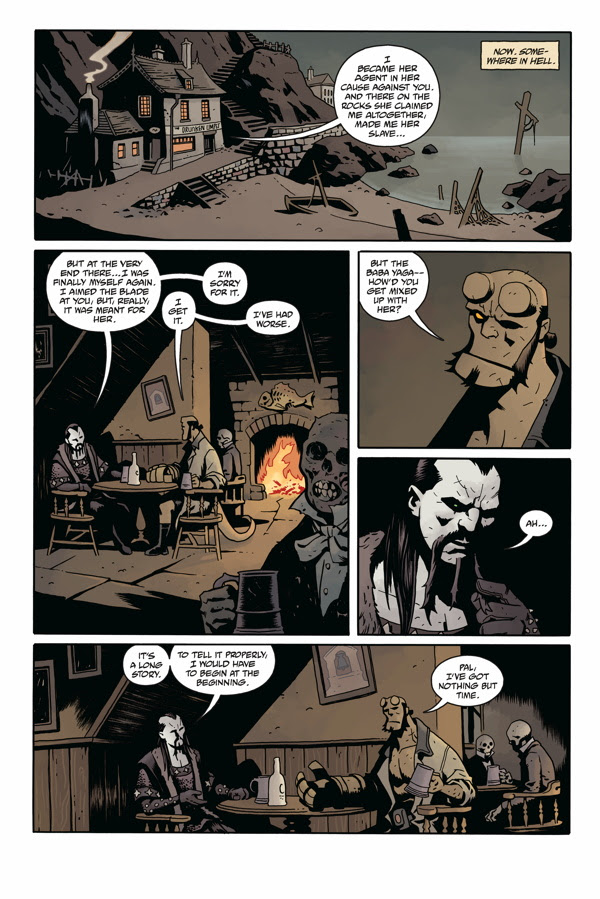 FS: This isn’t your first collaboration with Mr. Mignola. Have you two developed a shorthand for communicating what you like to see coming out of your combined work?

BS: I think so? It’s hard to say, we have worked together for almost a decade now, so I guess at this point there’s a lot we don’t need to discuss. 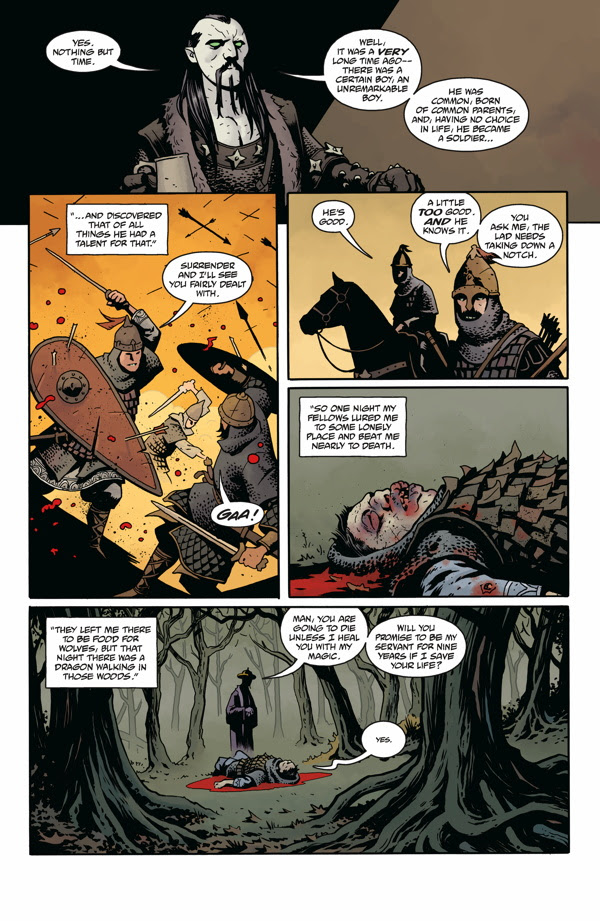 FS: Following up on that, what was the collaboration process like on Koschei? How did you become involved in the miniseries?

BS: I was always going to be the artist on it from day one, but there were a few delays in getting to it. I think it was first talked about 3 or 4 years ago. So I spent a long time looking forward to this one. 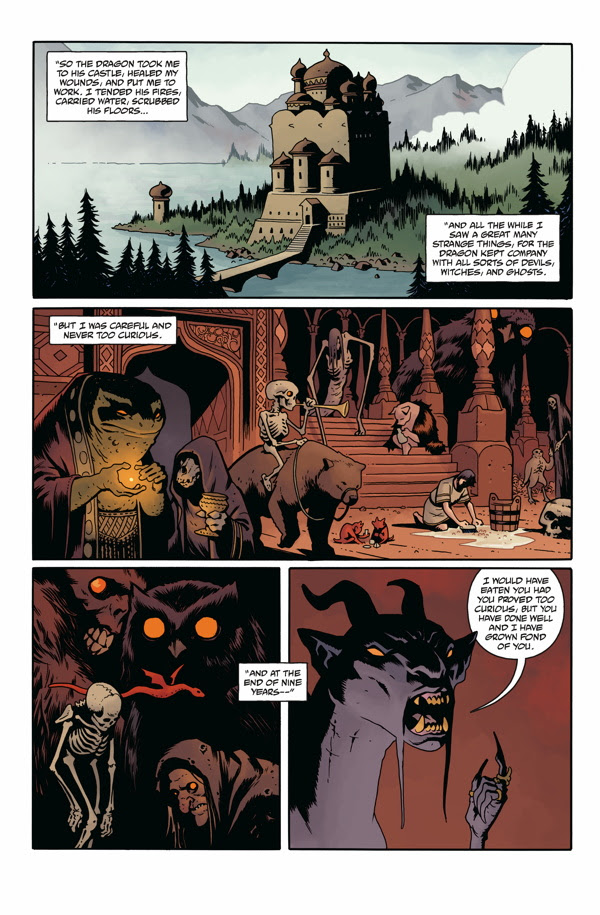 FS: Baba Yaga plays a key role in the first issue. Did you do any research around her folklore and myth to land on the look she ultimately takes in Koschei?

BS: Mike came up with his version of Baba Yaga a long time ago. I didn’t bother reading up on her or the actual stories about Koshchei, I think Mike’s versions of these things need to be treated as their own interpretation. Although I did watch a lot of old Russian fantasy films, stuff like The Sword and the Dragon, Viy, and all the old Baba Yaga films. But that was mostly for the visuals. They’re beautiful looking films. 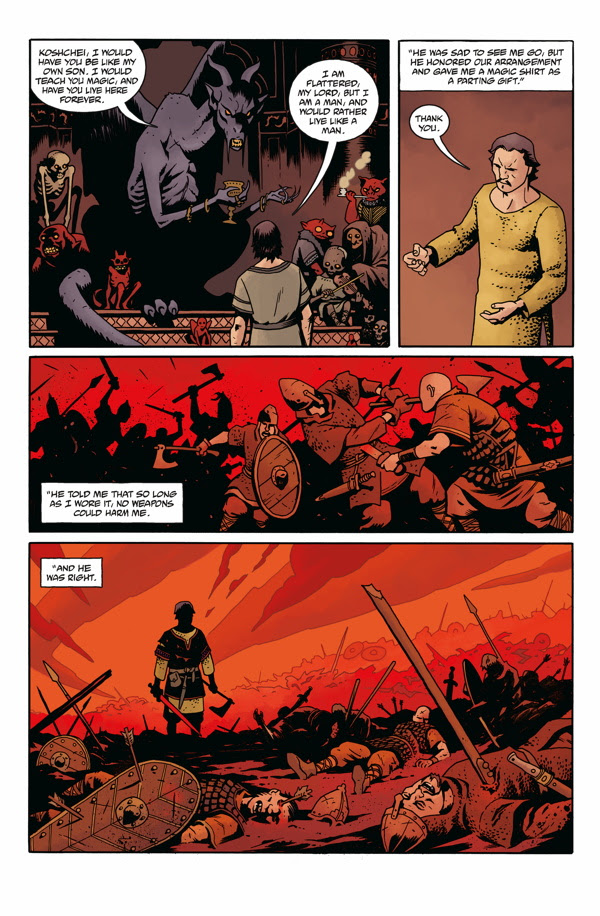 FS: Is there a particular headspace you like to be in before tackling art on a book like Koschei? If so, are there things that you do that assist in getting you into that frame of mind?

BS: Not really. It’s my job, so every day I just turn up and sit at the desk and do my best. Some days are easier than others. I guess all comic artists have that problem, which is a pretty nice problem to have, really. Knowing how lucky I am to do what I do every day is a pretty good motivator. 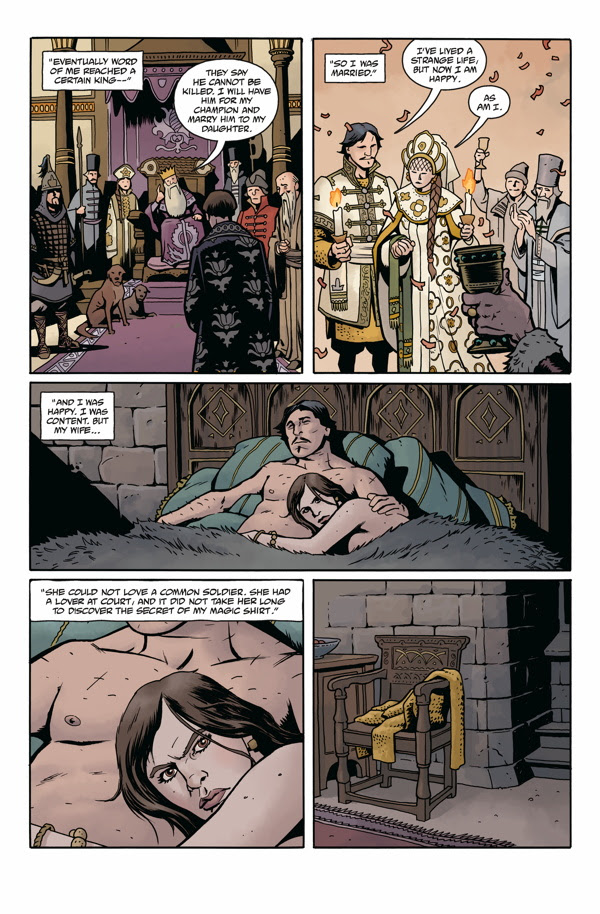 FS: As Koschei tells the story of his life to Hellboy, there seems to be an air of regret that fills his tone. Koschei is a man who has left a bloody history in his wake. How necessary is it to have sympathy or empathy for characters such as Koschei when tackling a project?

BS: He’s not a character that’s always easy to empathize with. He does do a lot of terrible things. It helps that he’s just a lot of fun to draw.

FS: What can we expect from the miniseries moving forward?

BS: Hopefully, a really visually interesting book. There’re a ton of great moments in this. Mike’s written an amazing story, it’s one of those bizarre folktale stories that only Mike can write. There’s stuff in here you would never get from any other writer and that’s some of my favourite stuff that Mike does. There’s plenty of easter eggs for fans of the wider universe, but at the same time you don’t need to have read any

Koshchei the Deathless #1 of 6, written by Mike Mignola with Ben Stenbeck on art, goes on sale this Wednesday, January 3rd, from Dark Horse Comics.

Legendary Hellboy creator Mike Mignola is returning to Hell, along with acclaimed artist Ben Stenbeck and award-winning colorist Dave Stewart, for Koshchei the Deathless, a new  six issue mini-series from Dark Horse Comics. Sent to kill Hellboy by the Baba Yaga in Darkness Calls, Koshchei the Deathless hinted at a long and tragic life before being enslaved to the Russian witch. Now Koshchei relives every horrible act on his road to immortality and beyond, with none other than Hellboy himself—in Hell. Here Mignola returns to Hell and to the bizarre folklore that’s filled some of his greatest books, reuniting with one of his favorite collaborators, Ben Stenbeck (Frankenstein Underground, Witchfinder: In The Service of Angels, Baltimore) and Dave Stewart. The debut issue of Koshchei the Deathless is on sale on January 3, 2018.