With Marvel Studios’ Captain America: The Winter Soldier debuting Friday, you’ll want to pay respect to America’s favorite Super Soldier by sporting a Captain America-inspired T-shirt.  Don’t have one?  Don’t freak.  We’ve scoured the Interwebs for the best T-shirt options out there for your night out with the First Avenger.

Whenever I read comic books, I often daydream about how kickin’ it would be to be a superhero.  (Do the kids still say “kickin’”?  I’m gonna go with yes.)  However, the fact of the matter is, we live in the real world.  A radioactive spider isn’t going to bite me and grant me spider powers and I don’t have the resources to trek across the globe to learn how to fight crime.  Sure, I could devote my spare time to working out, but I need to cut through the recordings on my DVR and the cookies are going to expire if I don’t eat them now and I don’t want to work out at all.  Luckily, I don’t have to do all of that working out bullshit because I can score this sweet Captain America costume T-shirt that makes it look like I do all of that working out bullshit.  This T-shirt has all the trappings of the torso of Cap’s costume without any of the work.  The blue chainmail says, “I’m ready to take down the Fuhrer,” while the T-shirt sleeves say, “I could go for a sandwich.” 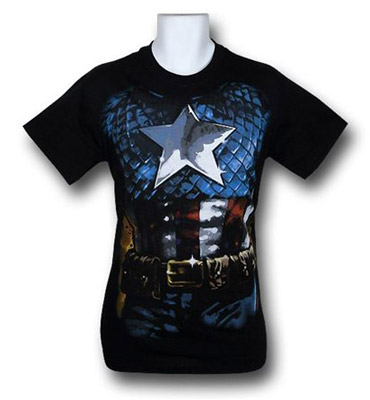 We all love Captain America, and if you don’t, buy a ticket to Cuba, pinko.  However, even I sometimes wonder that maybe the Star-Spangled Avenger, with his clean-cut image, might not speak to the America of today, which concentrates less on civic-mindedness and duty and more on, in the immortal words of Matthew McConaughey, L-I-V-I-N.  Enter the back-up Cap for the 21st> century: Captain ‘Merica!  This T-shirt features his beautiful visage smiling back at his people, his laid-back grin seeming to say, “Sure, I’ll share my pot.  Hunker down, son.”  This relaxin’ and chillaxin’ soldier is definitely the hero we want, not the hero we need.  His single earring and flowing mullet peeking out from under his cowl makes this ‘Venger approachable, letting you know he’s down for anything, buddy.  Waffle House at 3AM?  Sure thing, broseph, and he’ll even pick up the tab next time. 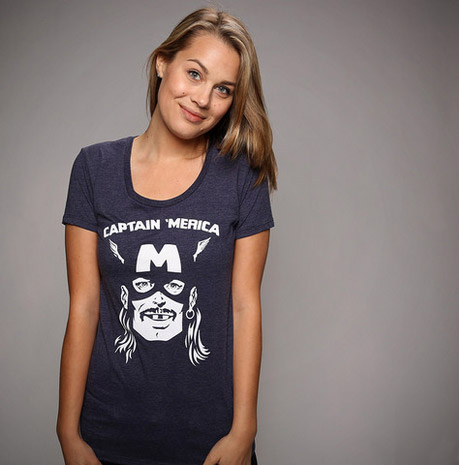 We Love Fine brings the fun of science and abbreviation to the fashion world with its Vibranium T-shirt.  This is incognito Captain America apparel, as it calls back to an important part of the character’s iconography: his shield.  Captain America’s shield is one of the items that is inseparable from who he is, as the red, white, and blue discus acts as both as offensive and defensive, much in the same capacity as the Captain acts for the United States.  Rather than merely feature a picture of the shield itself, the shirt instead highlights vibranium, the fictional element from which the shield was forged.  The fake periodic table entry includes the name of the element and its symbol in yellowl.  A nice touch is the atomic number listed in the entry: 13, which could represent the United States’ original 13 colonies or Captain America’s lady love, Agent 13. 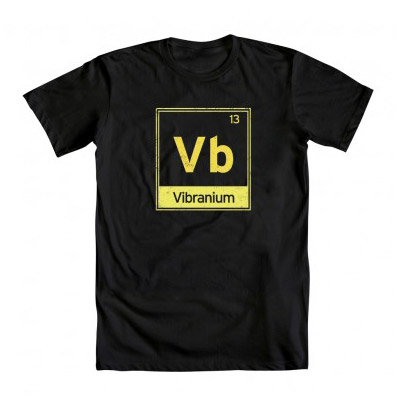 Another entry from the folks at We Love Fine, this T-shirt speaks to the uniting, gravitating power and influence that Captain America has on his friends and the rest of the Marvel Universe at large.  A play on the features appearing on the front of Cap’s costume, the star highlights Cap in the center, acting both as prominent hero and the core around which each of the other heroes connects.  The splashes of color that Black Widow, Bucky, Falcon, the Winter Soldier, and the Human Torch make across the shirt’s blue background reinforce how much color the characters have brought to Cap’s life, and vice versa.  While the T-shirt is clever in its design, it also highlights some narcissism on Cap’s part.  Yes, we get it, you’re awesome.  You survived World War II, you’ve told us already.  You do get that there are other heroes traipsing about the globe, right?  The presumption of you, you Star-Spangled horse’s—(Editor’s note: This entry was written during 24-hour period of insomnia and in no way is meant to cast aspersions on what Captain America has done for this country.) 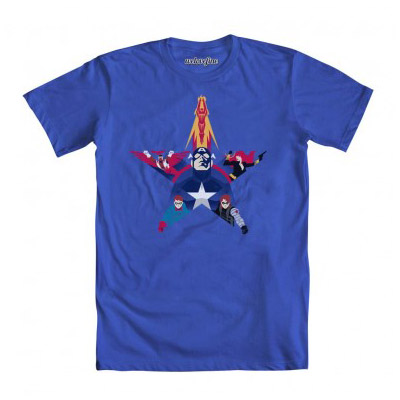 Being a time-displaced castaway from the 1940s, Captain America is nothing if not hep to what the kids are doing.  As such, Cap, of course, would adore this T-shirt.  The use of a Twitter hashtag juxtaposed with the “living legend” moniker would make a smile crawl across Cap’s face as he asked, “What’s that pound sign doing there?”  In all seriousness, this is a pretty kick-ass T-shirt.  It pays respect to Captain America’s staying power while using a hashtag that seems to imply that he’s always trending.  The empty mask positioned above the hashtag is a nice change of pace from the use and overuse of Cap’s shield included in many T-shirts.  The lack of facial features present in the mask always suggests that anyone can be living legend under that mask, given the fortitude and desire. 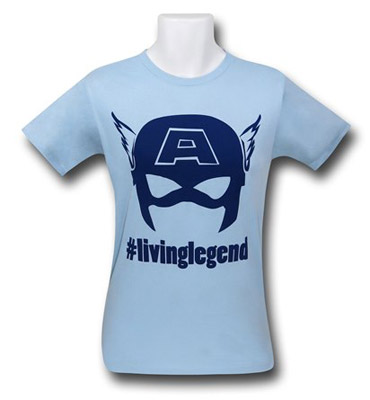 This one is a bit of a cheat, as it isn’t, strictly speaking, a Captain America T-shirt.  However, with the Winter Soldier making his cinematic debut Friday, it would be a crime to not give a shout-out to our favorite presumed-dead-sidekick-turned-brainwashed-assassin-by-the-Russians-for-Cold-Warring. (Hyphenation-a-go-go!)  The T-shirt, much like the Winter Soldier himself, flies under the radar, stealthily sneaking into your hearts and wallets with an understated yet elegant design.  The red star, representing the Soviet Union which enslaved the Soldier, pops in the background against the gray, much like he carves a swath across the nation’s spirit.  The haunting eyes in the foreground are heavily shadowed, alluding to the Winter Soldier’s past as Captain America’s sidekick-in-arms.  The eyes reveal a sadness and a pain, but also an intensity by which he will penetrate your defenses.  Those eyes almost seem to be judging America, contending that we brought the Soldier’s wrath on ourselves for continuing to let the Kardashians breed.  Also, the eyes are positioned right over the breasts, so keep your gaze up here, fellas. 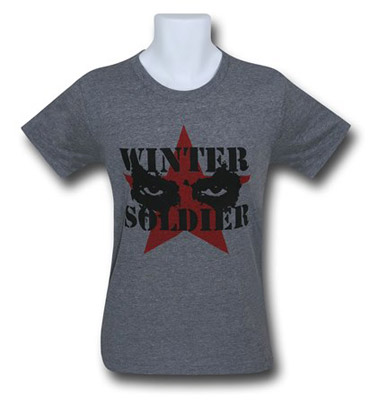