“In continuity or not, Bruce Wayne and Selina Kyle couldn’t have had a more appropriate and heartfelt wedding and if this is the last that fans of the characters get, then we’re lucky to have this one.”

I will admit something that isn’t exactly professional and something that reviewers probably shouldn’t say, but I want to be upfront: I didn’t read all of the Batman/Catwoman maxiseries from DC Comics’ Black Label imprint. Oh, in the beginning, I voraciously consumed the first few issues, excited at both the prospect of Bruce Wayne and Selina Kyle’s relationship of being further developed from writer Tom King’s work on that interaction as well as seeing the character The Phantasm make the leap from the film Batman: Mask of the Phantasm to the pages of a comic. King could have the proper conclusion he intended to the one he wove about the courtship of Bat and Cat. However, as the maxiseries starting releasing issues late, my interest waned: not because I wasn’t interested, but because there are so many other books that I had to read that had my attention. All that said, that leads me to Batman/Catwoman #12, released in June of this year and concluding the maxiseries. It was no secret that Batman and Catwoman would wed in this issue; the Internet and news outlets spoil early and quickly (and I suppose I just joined their ranks as well). And that’s why I picked the issue up, despite having missed a good six issues in between: I wanted to see those two lovebirds have the happily-ever-after they deserved. I wasn’t concerned about the Phantasm or the future storyline; I wanted to see the Bat and the Cat make it official-official. As such, this review won’t focus on those two threads, as my context is limited and I didn’t follow along with the issues I didn’t read. Instead, I’ll throw the spotlight on the wedding itself and the emotional payoff it gave to readers such as myself. (Also, I do concede that not addressing the Joker/Catwoman thread and how it informs the wedding ignores a good chunk of that story, but, again, I’m just here for the courtship.)

And with all that said, how was that wedding handled? King, artist Clay Mann, colorist Tomeu Morey, and letterer Clayton Cowles deliver the only ceremony that would be appropriate for a love affair such as Bruce and Selina’s, and they nail the landing. They begin with this arc in Bruce’s bedroom in Wayne Manor, a familiar scene of Bruce sitting on the edge of his bed, dejected at the course of events that have unraveled with Phantasm and the Joker. As Bruce puts up walls almost self-mockingly—“I’m Batman. Vengeance is the night. I’m fine.”—when Selina attempts to talk him down, she volleys back and says she doesn’t care about the trappings of the Dark Knight. At the end of the day, they’re just two people who are emotionally hurt and have found one another, and that’s a good thing. They’re good for one another.

After some talk of what happened between the Joker and Selina, the next we see them in the present is at the Gotham Chapel, a play on every stereotypical Las Vegas chapel you’ve ever seen. Selina and Bruce are dressed all dapper, with the only hint at their double live a barely-there set of cat ears adorning Selina’s hair (which is a fitting substitute for a wedding veil). Instead of an Elvis marriage package, however, the duo pick the Batrimony one, obviously, complete with Batpicture and Batwedding license. All they need are witnesses, and thankfully they know a couple who can be there faster than a speeding bullet. Clark Kent and Lois Lane arrive, and it’s a nice reunion and callback to the couple’s friendship they developed during King’s run on the main Batman title during his run on that book. Selina and Lois’ interactions are genuinely sweet and it’s nice to see that dynamic revisited again. (And it’s hilarious that Bruce totally calls it when he tells Selina that Clark is bound to go on about hope and how it ties into marriage.) The wedding, of course, is simple, with the exception of a man dressed in Adam West-era Batman garb officiating. The pair say their vows and, aside from a music snafu that calls back to a narrative thread from earlier in the book, the wedding goes off without a hitch. They kiss as the lyrics from “O Holy Night” close the issue.

So, with all my anticipation, was the wedding as presented a success? Absolutely. Oh, it’d have been nice to have seen a member of the Bat Family in attendance, but having Lois and Clark there was nice and picks up a thread of continuity from King’s run, as mentioned. And King gives us the best couple’s dynamic between the four that has ever been seen in comics, for my money and experience. It’s a very clever shift of expectations as well, having the two marry in a Gotham Chapel: there’s no pomp and circumstance, just Selina and Bruce with two people they love. While most superhero weddings are extravagant affairs and/or focus on stopping some villainous threat in between, King knows that this is Bruce and Selina’s moment. They fight the forces of darkness all the time. They have to be bigger-than-life at an exhausting pace. King knows that this needs to be more intimate, and the wedding is better for it.

And while the duo don’t give pre-written vows, the linework from Mann does all the heavy-lifting needed. How he renders their body language and how they look at each other gives Selina and Bruce rare vulnerability, and it’s appropriate that the vulnerability manifests here, when the moment is just about them. The colors show that vulnerability as well, as Morey seems to have made the palette subtly lighter in the scenes focused at the Chapel. This is a lighthearted, celebratory affair and, even though it is Batman and Catwoman, the colors need to reflect that joyous atmosphere. Cowles’ lettering is crisp and clean, with him getting the chance to really shine as the music begins during the nuptials. 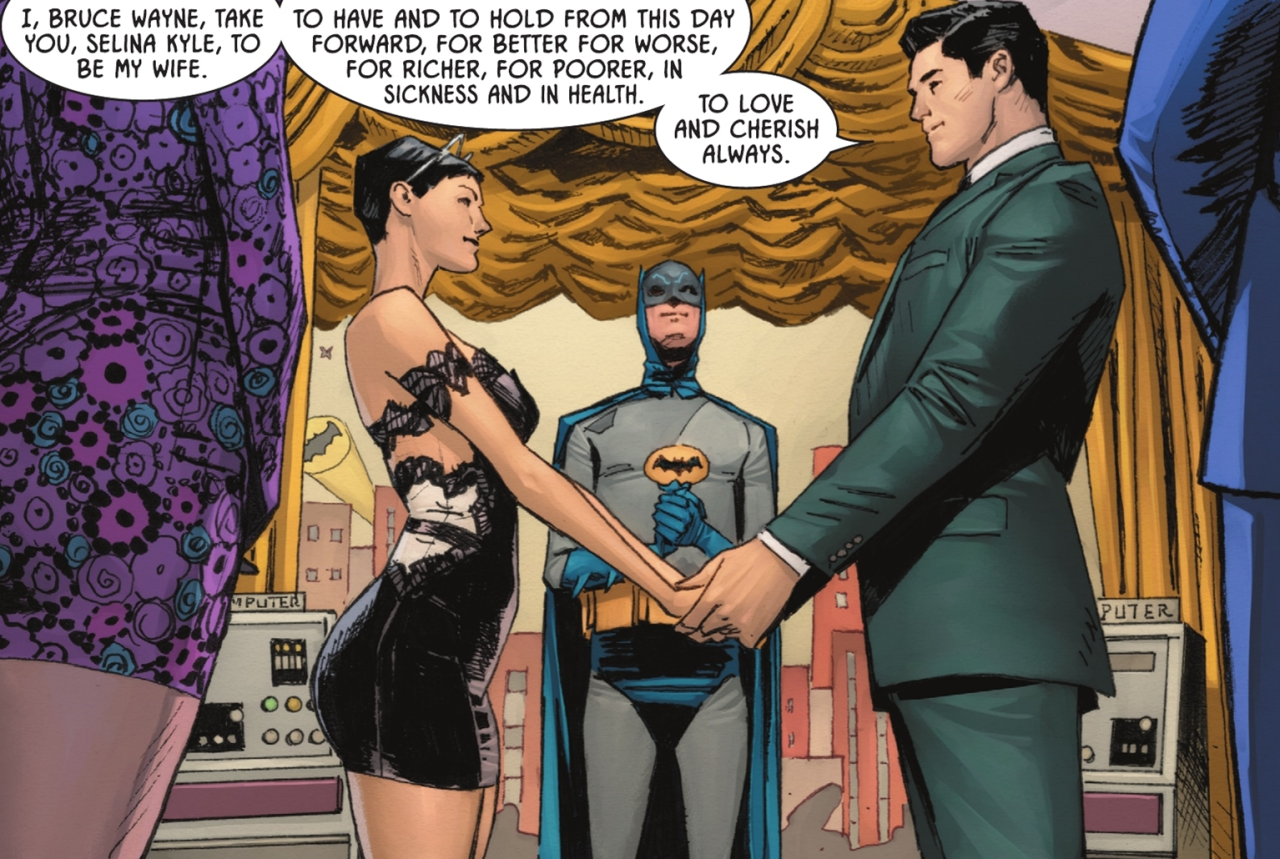 Again, the fact that I explain why I never finished the series is not meant to be disrespectful, as I’m big fans of the entire creative team. But I’m very glad I popped back in to see the Bat and the Cat tie the knot, even if it’s not in continuity and even if the pair sadly aren’t together in current Batman tales. The wedding feels like everything King was building toward with that relationship, even if things had to be shuffled around DC’s defunct 5G plans, which I won’t get into here. In continuity or not, Bruce Wayne and Selina Kyle couldn’t have had a more appropriate and heartfelt wedding and if this is the last that fans of the characters get, then we’re lucky to have this one.

[Note: While it might not seem fair to give this issue the high score I am since I was more interested in the wedding itself, I am giving the score I have chosen simply because the wedding resonated so well with me and stuck the landing as it did.]

From the official maxiseries description:

The Bat and the Cat’s past, present, and future collide in a thrilling and romantic epic from the superstar team of writer Tom King and artist Clay Mann!

Tom King returns to the rocky, romantic saga of Batman and Catwoman with his frequent collaborator, superstar artist Clay Mann!

Echoing plot points from King’s epic Batman run, this sweeping tale is told across three timelines: the past, when the Bat and the Cat first fell in love; the present, where their union is threatened by one of Batman’s lost loves; and the future, where the couple have a happy life and legacy—including their daughter Helena, the Batwoman.

As the story begins, after a long marriage, Bruce Wayne passes away—which frees Selina Kyle to settle an old score. At every stage of their relationship, Bruce and Selina have an unwelcome chaperone: The Joker! Oh, and that lost love of Bruce’s? It’s Andrea Beaumont, a.k.a. Phantasm. Just thought you’d want to know.

Bite-Sized Review: BATMAN/CATWOMAN #12 (2022)
In continuity or not, Bruce Wayne and Selina Kyle couldn’t have had a more appropriate and heartfelt wedding and if this is the last that fans of the characters get, then we’re lucky to have this one.
8Overall Score
Reader Rating: (0 Votes)
0.0