Several years ago, Skipper Martin had a little project called Bizarre New World. It was a unique take on a world where one of mankind’s most fantastic fantasies became realized: an average dude found out that he could fly. It didn’t just stop there, however; Skipper’s Bizarre New World went a step further. The whole world began to fly. Everyone, everywhere.

The story was definitely a game-changer for escapists with dreams of flying.

So, naturally, to follow-up on Bizarre New World, Martin took things to the next level. He decided to anthologize his concept with other creators from the comic book industry as a way of connecting with the myriad of different ways that human flight could be realized. Martin serialized his project online and slowly, painstakingly grew his latest anthology project.

I sat down to talk with Martin about his Kickstarter campaign and, as a special incentive to promote his the campaign, FreakSugar has exclusive access to one of the anthology’s stories. Check it out!

FreakSugar: Skipper, for folks who aren’t familiar with your project, Bizarre New World, how would you describe your project?

Skipper Martin: The world’s first flying man barely had enough time to enjoy being unique when suddenly the human race joins him in the sky. If the world survives the initial chaos, we’ll then have to learn to live with this new gift. The self-contained 278 page story is all seen through the eyes of the first flyer Paul Krutcher. This graphic novel has a definitive ending, and it’s now totally completed.

FS:  How does this anthology project tie into the original project?

SM: I wanted to fully explore what a flying world would be like, but always thought one point of view was too limiting. So I brought in other contributors to tell stories away from my main character. Adding new creative voices and visual styles made it possible to delve deeper into the concept, and in my opinion make the whole project feel more thorough and satisfying.

FS: Originally, this was published through APE Entertainment; how was the original reception of the project prior to the anthology concept?

SM: It was overwhelming. I sent the book out for reviews hoping people wouldn’t hate it. Instead we were showered with glowing praise being called ‘best new comic’ twice, and at last count had 50 positive reviews, with only 2 negatives. Not a bad ratio at all if you ask me!

FS:  How did you go about selecting submissions for your anthology? Are there any noteworthy creators involved?

SM: I didn’t want to limit myself. I was a new writer too, so how could I justify only working with established talent? I started looking through personal contacts and getting recommendations like Tone Rodriguez, Michael Woods, and Troy Dye. Then I just went for broke and threw an ad on Digital Webbing. Yes, I did get a fair amount of unusable work, but I also discovered a bunch of excellent new talent like Maxwell Patterson, Nicholas Miceli, Dan Hill, Wilfredo Duran, Dino Caruso, Mike Blaylock, and Raphael Moran. I also learned that many comic book reviewers were struggling creative writers, and that led me to more seriously great talent like Neal Bailey, Joey Cruz, and Chuck Moore. My selection process was simple – if people could take a unique or fresh look at a flying world, I gave them a shot. In the end the collection speaks for itself and I’m very proud to have been some of the first published work from people like Megan Levens and Tradd Moore. But I also took the opportunity to track down some of my personal heroes like Rick Leonardi and Tom Orzechowski to invite them along. Fortunately they said yes, and it makes the final collection that much more satisfying all around.

SM: It’s very difficult to get people to try out something brand new. It made sense to offer up many of the stories online so people could take the project out for a test drive so to speak. Getting the anthology itself finished was a 7 year endeavor in itself, but getting into print is now the next hurdle I need to clear. If we’re lucky the Kickstarter will make that part of my dream reachable. If I can’t get it done through the campaign, then I’ll just have to knuckle down and find another way to make it happen. So many people contributed to this special project, and it deserves to be immortalized in book form.

FS: Having other creators put their fingerprints on your intellectual property is certainly unique as an independent project. How do you feel that allowing other artists to tap into your world has enriched the material?

SM: I think it’s what makes the project truly complete. It’s called Bizarre New WORLD for a reason, not Bizarre New LOS ANGELES. Without the other contributors, it would have been a singular voice behind it all, and for a project that’s supposed to explore the whole world, that doesn’t sound like an honest approach.

FS: Bizarre New World is a personal story for you. Care to discuss how you connect with the source?

SM: I decided to ‘write what I know’ and give the lead character Paul Krutcher my life. If he was really supposed to be an ‘ordinary guy,’ then it makes sense to give him a life I personally relate to and understand. I’m just a guy with a car, a job, a son, an ex-wife, bills to pay, and the list goes on and on. I assumed I would swap that stuff out when a better idea came along, but it never did. Paul is my middle name, I put my son in the book, Paul drives my car, lives in my house, the only difference is one day he discovers he can fly. I myself am patiently still waiting.

FS: What are some of the incentives for pledging to your campaign?

SM: I tried to create rewards that I’d want if I were a possible backer. There was a serious effort made to make the books themselves affordable, so the entire 278 page story is being offered for only $25. For an independent book, that’s a damn reasonable price. I know because I cut into my profits to make that possible, but backers can even be more frugal and get the book digitally for $12. I’m also offering up original art, a deluxe hardcover version of the book, and even a reward where you can have a special copy of the book with you flying on the cover.

FS: How stressful is crowd-sourcing a project of this magnitude? What was the easiest aspect of the undertaking? What was the most difficult?

SM: I was warned that crowd funding is s big undertaking, but I never imagined how big. I’ve been crafting the whole thing since January, and yeah, it’s extremely stressful. In regards to the “easiest” aspect of it all, I’d have to say most of the process isn’t actually difficult, it simply takes time to complete the endless amount of tasks that eventually make up the whole endeavor. Nothing is ridiculously hard, but thousands of easy tasks add up to a hard overall process. The most difficult aspect? Easily the endless amounts of waiting and worrying for all the moving parts to come together and work as they hopefully should.

From my personal experience, more went wrong than right, but this entire comic book dream project has been a trial by fire. I’ve failed more than I’ve succeeded for sure, but in the end, it’s the final stories that matter. The time, the money, the victories, the heartaches, in the end I’m happy the books themselves turned out so beautifully, and it’s my hope that readers can feel the care and devotion that went into ever single page of Bizarre New World.

Be sure to check out Skipper’s Kickstarter while there’s still time. Supporting creators with meaningful projects is more important than ever. – Steve 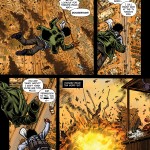 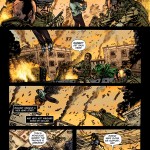 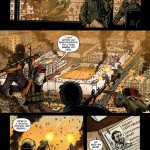 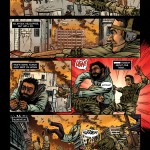 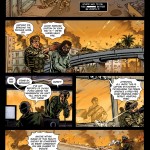 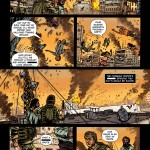 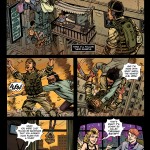 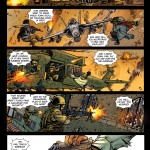