Across four decades, Michael Bay hasn’t really changed. But it’s remarkable how much the attitude toward him has. When he started out as a filmmaker in the Tony Scott mold under Jerry Bruckheimer’s umbrella, he was called a hack. After Armageddon and Pearl Harbor, he was compared by some critics to Satan. Very vocally online Gen-X manbabies lost their shit when he dared lay his cinematic fingers on Transformers, a property that in itself was originally a bastardized mix of Diaclone and Microman. Bad Boys 2, when it came out, was deemed hugely offensive for its perceived cultural insensitivity, outdated sexism, corpse-defiling, police brutality, and an overall general sense of nihilism.

And yet, Bay kept working. Because general audiences liked him. Mostly. And once those who grew up on his movies came of age, things shifted. Most conspicuously, Edgar Wright’s Hot Fuzz reclaimed Bad Boys 2 as a new action classic, detached from any hot-button, contemporaneous political hot takes. When Pain and Gain came out, critics almost seemed to decide in advance (wrongly!) that it was the Bay movie they were going to like. The Transformers movies still can’t catch a break, despite my best efforts to counter the whining tide, but nowadays, reviewers unironically use the term “Bayhem” as a positive term to describe his spinning camera moves around big explosions and sunlight shining through American flags. Maybe it’s because they’ve seen Zack Snyder combine some of these attributes with Terence Malick flavors, and determined that undiluted Bay is best Bay. But “Snyderhem,” if you will, will have its day in the press once someone like Edgar Wright gets old enough to make a movie extolling Batman v Superman. 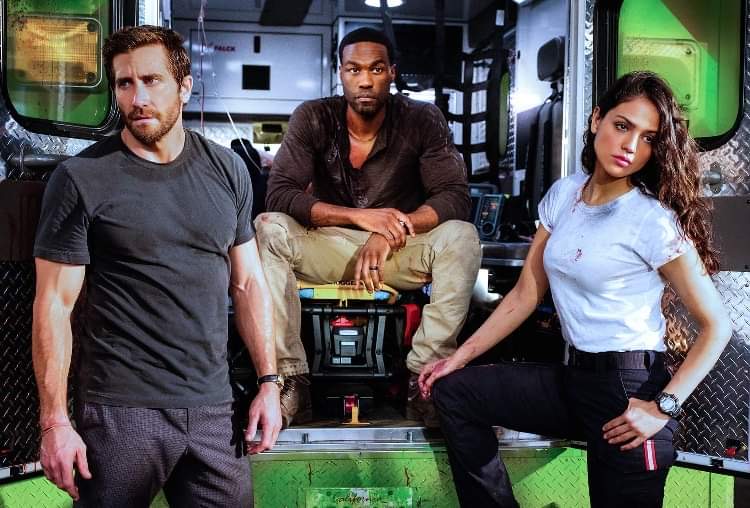 Bay’s movies, needless to say, are meant to be seen on the biggest screens possible, in places like the currently shuttered Cinerama Dome, where I first saw Bad Boys. Having missed Ambulance — out now on Blu-ray and digital — due to its elusive press screenings, my plan was to get the 4K and watch it on the large living room TV. Life, and available supplies, intervened. The regular Blu-ray came for review, and then I promptly tested positive for COVID. Exiled to the spare room full of boxes and a roll-out bed, I wound up watching the Movies Anywhere version on my laptop, as Bay and God surely would not have wanted or intended for my first viewing. Nonetheless, it was the right place, right time. Bay’s purposeful attempt to break out of his own quarantine allowed me to vicariously escape mine for a couple of hours. As well as pausing for the requisite bathroom breaks while under (admittedly imagined) doctor’s orders to rest and drink plenty of fluids. Let’s just say my doctor rarely tailors his advice very specifically, and I basically had to pull quarantine and medication instructions thirdhand out of his receptionist.

Paxlovid sucks, by the way. Even if you think COVID will be a breeze on you, those big honking dual pills with bitter aftertastes all day are worth not getting the virus for. Along with all the other reasons, of course.

Anyway, Bay wanted to get out and make a movie that wouldn’t be compromised to death by COVID restrictions, so the idea was to make an “in a box” type story — what we normally think of as the Die Hard formula, with the hero trapped in a limited area. Bay being Bay, the “box” in question is a speeding ambulance. So while the story does indeed focus on four characters in a small space, said space is busy speeding all around the city crashing into things.

The story’s less Die Hard than it is heist gone bad, though. Noble military veteran Will (Yahya Abdul-Mateen II) needs far more money than he has, to pay for his wife’s cancer treatment that insurance won’t. (His wife is played by Moses Ingram, in a small pre-Star Wars part she makes the most of.) Fortunately, or not, Will’s brother Danny (Jake Gyllenhaal) is a second-generation master criminal bank robber. Will asks for a loan; Danny needs an extra man on a job. It’s gonna be easy. For old time’s sake. Well…

Obviously the robbery doesn’t go cleanly, and Will and Danny wind up in an ambulance alongside EMT Cam (Eiza Gonzales) and a seriously injured cop (Jackson White) that Will just shot. They need to get away, but know that if the officer dies, their fate is sealed. But they can’t exactly just pull up to a hospital either. So until they can come up with a better idea, Cam must keep Officer White alive while Will and/or Danny drives the vehicle around Los Angeles without getting bogged down in traffic.

Bay shoots downtown L.A. much like he did in the first Transformers, in which it was loosely pretending to be a different city. The skies are blue, the buildings sun-baked brown, the storefronts color-saturated. At one point the ambulance even gets a green repaint, which could be a reference to the green ambulance alt-mode of Ratchet in the Transformers films. Gonzales is very much the classic raven-haired Bay beauty, but she gets more agency than most, as clearly the smartest one in the vehicle. Mateen, whom we’ve seen play both superhero and super-villain, is ironically the most vulnerable in this; the only one who stands to face consequences worse than death if he fails.

The newest camera trick in the Bay repertoire is a drone shot that drops face forward down the side of a tall building and into traffic. He does this a couple of times, no doubt delighted he can now do a version of that Pearl Harbor bomb-dropping follow shot without CG. He claims the limited CG in this film looks like shit, but I certainly didn’t notice, any more than I did perceived continuity errors in Gonzales’ level of blood splatter. If that’s what you see, the movie probably isn’t working for you anyway.

There’s something of a retro gangster movie feel to all this at heart — Cagney and Bogart, if they lived today, would thrive in something like this. Bay loves his outlaws, but in the end he is too deferential and reverent to cops, the military, and first responders to have the crooks win. This may well just be a means to an end, however, since it’s that reverence that buys him permission to shoot whatever he wants with their full cooperation, all while making the bad guys cooler. He lays it on a bit thick at the ending, which feels like a studio-mandated catch-up to every single character left standing, complete with a sort-of twist that’s so late as to be pointless. But it scarcely matters. You didn’t come to this movie to find out what happens after the ambulance stops. As Eternians say, live the journey.

And yes, it’s a journey that works surprisingly well on a laptop. The cramped conditions rely far more on closeups than usual, while the external chases look like the absolute coolest versions of the chases Angelenos regularly see interrupting local TV channel broadcasts. It may not be meant for the small screen, but it adapts better than most. And I say this having had to do pandemic-era reviews of Wonder Woman 1984, Godzilla vs Kong, and Zack Snyder’s Justice League from an iPad app.

Blu-ray extras are not ample, but they work — a handful of featurettes focusing on characters, action, ambulances, drones, EMTs, and the city of LA. They’re a little too quick to pat themselves on the back for colorblind casting of adoptive brother protagonists, considering that Mateen was actually a last-minute substitute for Dylan O’Brien (conveniently, because he’s much better. But don’t pretend it was written that way). There’s enough of a look at the technical aspects to see how key things were done, and both Gyllenhaal and Gonzales convey genuine enthusiasm and gentle ribbing for their director. A commentary would be fun, but not every Bay movie can have drunk Ben Affleck in the post-production studio.

On a scale of Bay movies, it’s a big step up from Netflix’s 6 Underground, which committed the unforgivable sin of being forgettable. It’s not at the madness level of Transformers: The Last Knight, but does offer some telling similarities: in one of the featurettes, Bay is shown playing with toy cars to convey what he wants in the next chase scene. It goes a long way toward explaining how this guy’s biggest cinematic achievements are movies about the greatest toy cars ever made — because they’re also robots — with stories that could have been improvised by children playing with them.

I’m not an apologist for all of Bay’s filmography — he’s partly to blame for why I used to hate Ben Affleck onscreen — but Ambulance is on the good side, along with his Bad Boys and Transformers movies. Don’t buy it just for the extras, but definitely check it out if you love him at his best.