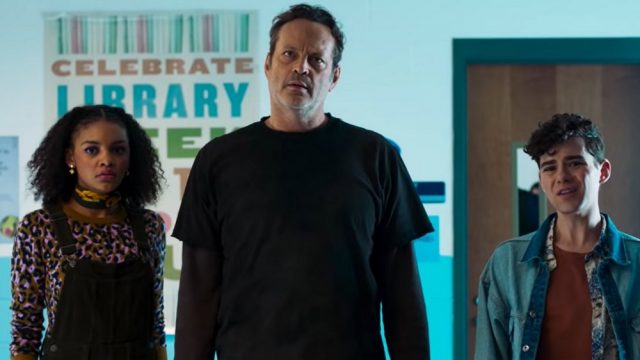 It probably goes without saying, but let’s reiterate for those who have (reasonable) trouble keeping up with movies in a non-theatrical environment: Freaky, out now on Blu-ray and digital, very much wants to be called Freaky Friday the 13th, as that mashup is the joke. Legally, it can’t, though the movie finds a very clever way to put a close facsimile of the Friday the 13th logo onscreen — by preceding it with a similarly styled “Wednesday the 11th” and “Thursday the 12th.” Like so many shunted to on-demand releases last year, Freaky was available at home at a premium price point, which is a great deal for a family of four. Thing is, it ain’t a family movie. Might still be a decent deal for a horror-loving couple, but if you’re single, or (like me) childless and married to a chronic horror-avoider, it’s less so. If I pay $20 for a movie I’m only going to watch by myself at home, there’d better be a Blu-ray attached to it. And now there is. And it’s worth it, especially since it features a commentary not available on the digital version.

Vince Vaughn plays the otherwise-unnamed masked killer known as the Butcher, a Leslie Vernon-ish spree killer who operates primarily around homecoming time. During an opening sequence that sets the tone, he gorily and hilariously dispatches a group of underage-drinking and sex-having teens via such devices as a vintage wine bottle, toilet, and broken tennis racket. But when he ends up absconding with a magical dagger, he gets more than he bargained for. Turns out it has a bizarrely specific curse where if you stab somebody with it but fail to kill them, you both exchange bodies for a day. And stay in those bodies forever, unless there’s a stabbing equivalent of a back-tag. 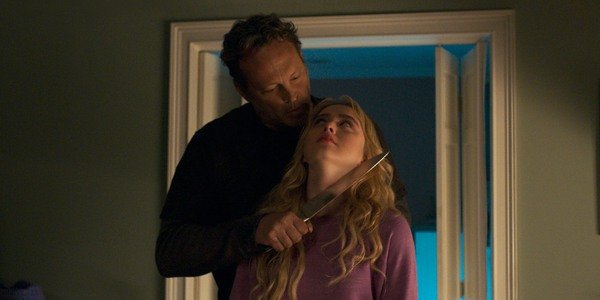 It feels a bit limiting upfront that our ticking clock is set for a mere day, especially since it takes a while before the body-swap actually happens. But director-cowriter Christopher Landon (Happy Death Day) makes the most of it. Vaughn may be a hefty, physical actor, but he’s clearly been cast less for his scare factor as for his willingness and ability to convincingly play a teenage girl in his own body. Trading physical spaces with Kathryn Newton’s introverted Millie, he gets to do cheer dances and babble on nervously, while she gets to toss people onto circular saws and cut their dicks off. There’s something to be said for the fact that a killer who often traffics in literal emasculation gets completely spiritually feminized — a larger kind of payback for all the homophobic bullying Landon suggests he himself experienced in high school. Vaughn the human being may have obtained a (partly unfair) reputation as a right-wing troglodyte, but if he is one, in any way, he doesn’t let it affect his choices here.

The best trick utilized by Langdon and cowriter Michael Kennedy is that they develop every character — save, perhaps, the disposable redshirts in the intro. Nobody else feels like they’ve been written solely as fresh meat, though some are clearly set up as heels who deserve their comeuppance. Within the context of a horror movie, the vast majority of the Butcher’s victims “earn” their fates not through sex and drugs, but garbage behavior towards innocent teens. Not that he thinks that way, necessarily — he’s going for the easiest kill most of the time. But it’s a happenstance of switching bodies that when he’s a sexy young woman, it’s toxic males and mean girls who are the most likely to bring themselves into his orbit.

Freaky is full of references to other movies, and made primarily for the adults who will appreciate them. But unlike, say, Scream, it doesn’t depend on being the sum of self-conscious nudges and winks. And even though it does take many cues from the ’90s PG-13 era of horror, the kills are unabashedly gory. And nobody plays the material like they’re smarter — or frustratingly stupider — than the plot. That’s a tough line to ride, but Langdon is clearly a fan who knows what he’d want to see on the screen. 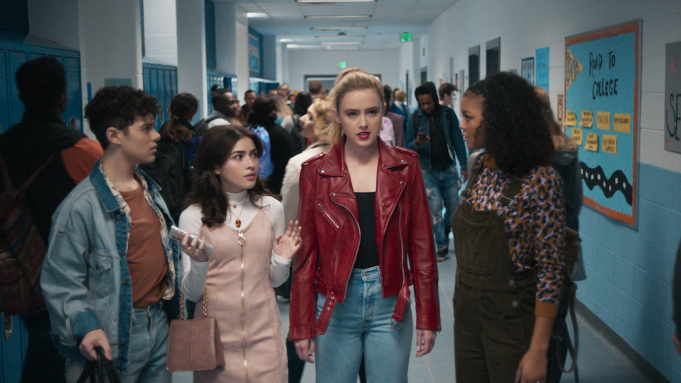 On a solo commentary track, Langdon points out many of the subtle references and tiny set-dressing jokes he’s scattered throughout. (Pay particular attention to the sponsor banners at the football game.) He also discusses every single budget limitation he had that forced him to cut things short or cut them altogether, and winds up, maybe inadvertently, making a great case for constraints causing creativity. (Who knew you had to get legal clearances for wallpaper?) And as you may not have known, turns out star Newton is also a professional golfer! All of which adds levels to the blacklight-minigolf sequence, which took place at what we’re assured is a real location, with just a few more cobwebs and skeletons added.

A handful of deleted scenes include one funny extended Uber gag that plays well but probably slowed the pace, and a few short moments that add extra references and hint at more expensive, cut ideas. Featurettes delve into aspects like the way Vaughn and Newton mirrored each other, while one focused on the gore mainly spotlights how the Alan Ruck kill scene was put together, and nearly didn’t happen. One unfortunate omission: Langdon mentions video of Vaughn and Newton practicing their cheers together a few times, but we never get to see it.

It’s hard to keep track of when things are available where these days — it’s partly my job, and I still confess to much disorientation. However, as of now, Freaky is available for affordable rental and reasonable purchase. And if you have any affinity for this kind of thing, you shouldn’t be disappointed with either.