Bob Fingerman has been around the block a time or two in the comic book industry with nearly 30 years of experience in the business. His work has been featured by the likes of National Lampoon, Penthouse, High Times, Heavy Metal and the Village Voice. Fingerman spent a year drawing Teenage Mutant Ninja Turtles and he’s had work featured at Dark Horse and Vertigo over the years. After his first full-length graphic novel, White Like She, Fingerman began work on the first incarnation of Minimum Wage for Fantagraphics Books in the early ’90’s, which was collected in 2002 and re-published as the Eisner-nominated collection Beg The Question. After a number of years of continued success, Fingerman has recently re-launched his perennial favorite, Minimum Wage with Image Comics as he tells the continued story of freelance artist Rob Hoffman.

I contacted Bob recently to talk about the re-launch of Minimum Wage and his experiences as an illustrator with personal stories to tell.

FreakSugar: Minimum Wage is semi-autobiographical.  How hard is it to put yourself out there in terms of being candid as a storyteller?

Bob Fingerman: It’s a challenge, but mainly to ensure I keep it entertaining. Since it is fictionalized and getting more so as the series moves forward, my being candid takes a backseat to my ability to craft fiction that feels real and blends seamlessly with stuff pulled from my own actual life.

FS: As you’ve drawn from your life and represented friends and family in your work, have you ever experienced resistance from people you’ve written about?

Fingerman: Not the ones I’ve consulted with. But I don’t ask everyone. 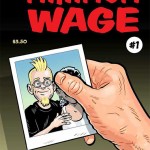 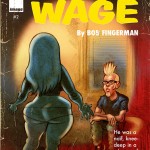 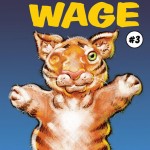 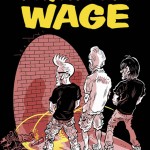 FS: How have things changed since you originally started Minimum Wage in terms of comic book production?  How has bringing your book to Image Comics changed the way you interact with the market?

Fingerman: I’m not sure how to answer that, honestly. Image is a very different company than Fantagraphics, or really any publishing house I’ve been with prior. It’s a great place for me because I have their total support and that means a lot to me. But in terms of my interaction with the market, not sure. I do my work and I hope retailers get onboard with it, because – and this might sound arrogant or egotistical – but I know if they do the audience will be there for it. I know there is understandable caution when it comes to ordering titles, especially ones a little off the beaten path, but I truly believe Minimum Wage could be a hit if it gets into enough hands.

FS: Minimum Wage #4 reminded me of so many nights out on the town with my friends; is it important to find touchstones like these sorts of universally experienced moments for the sake of engaging your audience or is there a more intricate plan here that’s based on your memories that you are embedding in the semi-autobiographical nature of the book?

FS:  Over the past 20 years, how have you changed your production methods?  Do you work digitally?

Fingerman: It’s a hybrid approach. I still draw traditionally, ink on paper, but do a lot of finishing digitally. My art’s pretty white on paper. I fill in my blacks digitally, so the lettering that way. I haven’t picked up a paintbrush to do color in years.

FS:  Can you tell us about what’s coming for Rob Hoffman in the months to come?

Fingerman: Not really. He’s still trying to find his way, maybe gain some wisdom and not be as raw. He still lacks the perspective to see how good he actually has it. Good friends, regular work, a nice place to live. He’s not living as a celibate monk. So, in addition to stuff I can’t discuss, he is on a journey to grow the fuck up. But he’s young and feeling raw at the moment. We’ll see if he can move past that. 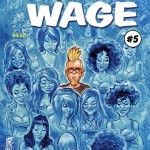 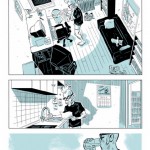 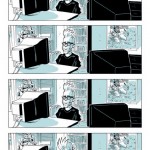 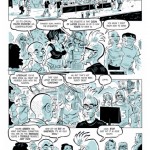 FS:  What other sorts of projects are you currently working on?

Fingerman: Right now I’m focused on Minimum Wage, but there are some reprint and archival projects coming. A new edition of my first graphic novel, White Like She, will be out this year. And next year a deluxe hardcover, a la Maximum Minimum Wage, of my post-apocalyptic “speculative memoir” From the Ashes, with tons of bonus material. I have other projects I want to get off the ground, so hopefully some of those can get off the ground, too. But those would have to be me as writer with someone else doing the art.

FS:  I noticed that you have fairly set panel layouts that are typically what I call a “widescreen panel”; do you use this standard layout to give your pages more of a static feel and then break the panels differently when you’re trying to focus on actual sequential movement?

Fingerman: It’s just something I arrived at when doing From the Ashes. I like the cinematic widescreen look. And I think a very regular layout makes it more accessible to people not normally given to reading comics.

FS:  How difficult is it to write comics that are funny?  I’ve always heard that writing comedy comics are the hardest types of books to write.  Minimum Wage has moments that are uproariously funny.  What’s your secret?

Fingerman: No idea. If I think about being funny or what it is to be funny it kind of leeches the funny out of me. I’d say it’s innate but that would seem pretty vain and dickish. But it is.

FS:  What sorts of advice do you have for aspiring illustrators?  What is the biggest lesson you can say you’ve learned in the past 20 years?

Fingerman: Illustrators? If you’re talking traditional editorial illustrators I’d say find a new path. That kind of illustration is in its death throes. Take those skills and get into the video game industry or work in film or create comics. The biggest lesson I’ve learned? That implies I’ve learned something. Kidding. Lemme think. Stay ahead of the curve. Don’t reject the new. Join it.

FS:  Will you be attending any shows this convention season?

Fingerman: Yeah, some later in the year. APE and the New York Comic Con in October. The North Carolina Comicon (in Durham) in November. That’s about it.