Aquaman, founding member of the Justice League and defender of the Seven Seas, has been enjoying some well-deserved time in the sun of late. DC Comics creator extraordinaire Geoff Johns helped tighten up what made the half-Atlantean such an interesting character at the beginning of DC’s New 52 title-wide relaunch.

Five years later, with DC’s “Rebirth” story event in full swing, writer Dan Abnett and artist Brad Walker hope to keep that momentum going, highlighting what makes Aquaman so great a hero to follow. I spoke with Mr. Abnett and Mr. Walker recently about their Aquaman: Rebirth one-shot, their plans for the character moving forward, and why Aquaman doesn’t need fixing.

FreakSugar: This is for both of you: I think we all have our entry point to the character or a favorite run. Peter David’s stuff was the first time I connected to the character. What got you hooked and interested in Aquaman?

Dan Abnett: I would agree with that. Peter David’s run is a particular favorite of mine. I admire his work enormously. I enjoyed Aquaman under Peter very much indeed. Another run I enjoyed, and it seems very obvious, is Geoff Johns’ at the beginning of the New 52. He didn’t so much redefine the character as outlined what makes Aquaman so great. Those two runs are benchmark ones for me.

Brad Walker: I started with Peter David and read the character pretty consistently since then. I loved the “Sub Diego” storyline. I enjoyed the mystical stuff that Kurt Busiek wrote. I loved Dan Jurgens’ run.

I think what is really cool about Aquaman—and this was highlighted in Peter David’s run—is that he can be a lot of things and still be a character that can go in any direction. At the same time, you can bring it back to a classic take like Geoff’s run. What I love is that we can use that as a starting point and move in any of those directions and we can have it all. We can do anything.

We’ve heard from so many Aquaman fans since getting this gig and each fan has a particular run that, for them, is the “one.” He’s a cool character in that sense.

FS: Dan, what kind of bridge can we expect to see from your last issue of Aquaman, issue 52, to Aquaman: Rebirth #1?

DA: It’s a fairly strong one. I wrote the last four issues of the New 52 book very conscious of the fact that I’d be writing the new book. I set up certain key elements knowing that they would play out. The thing about Aquaman is that it’s not broken. It’s starting from a very good springboard from what Geoff set up at the start of the New 52.

The urge to do a marketing stunt to change everything overnight for no reason at all just isn’t necessary. The base is there. The Rebirth issue and the first issue of the new series are great points to jump on board, especially if you have never read Aquaman before. There’s plenty of opportunity to learn who Aquaman is.

A more noticeable reinvention is how Brad has tightened up the art concept without radically changing anything. He just tightened up what was already there before.

BW: Like Dan said, the New 52 version wasn’t broken. When I first got the job, I didn’t know how a radical of a relaunch this could be. When it was announced I would be on the book, a lot of fans asked if Aquaman would look like Jason Momoa [who will play Aquaman in the DC Cinematic Universe films], like a barbarian. That was actually my assumption as well.

When we sat down and started talking about design, the heads said, “We want it to be very classic, but also very new at the same time.” [laughs] It was sort of an interesting dichotomy. But it was fun to play with: look at what people like, look at what works, look at the visual, and think of things to tweak it without it looking unfamiliar. I began looking at fabrics and textures and I was very sure I wanted the core design to be there.

I approached the design of Aquaman and Mera by thinking of Todd McFarlane on Spider-Man in which he brought back classic villains. None of the characters were redesigned. Todd treated shapes and patterns in a way that made them seem fresh. That’s how I approached Aquaman. I’m not a fan of redesigning classic characters. The fact that they endured for 60 to 75 years speaks so well to what works and what lasted. I didn’t want to change anything up. So I just looked at how I could update a classic look.

FS: To that end, were there any characters you were itching to get your hands to leave your mark while, at the same time, giving a nod to what made them so great in the first place?

DA: Aquaman is blessed with a wonderful supporting cast member in Mera. She’s an incredibly underrated character. She’s certainly the co-star of the book. To be able to write her and see where we can go with her storyline is terrific.

We have Black Manta as the key villain to begin with, which is brilliant because we get to present him as a more rounded character. Another ambition we have is to bring the supporting cast to the fore and give them more screen time, as it were, and add to it so Aquaman has more people to interact with. Aquaman has always had a relatively strong group of really strong characters that were more than enough to keep the book rolling along. But now that we have a twice-monthly schedule, we can show there are other people around. With every classic character we give more time to, we can introduce a new one. It’s honoring the heritage and legacy and hoping to add to it.

BW: I want to draw more stories featuring Salty the Sea Dog, certainly. [laughs] I really wanted to draw Vulko, but I guess he’s not beach-ball round anymore with the crazy, cracked-out Green Arrow mustache. [laughs]

But I really wanted to get a chance to tackle the denizens of Atlantis and interestingly-designed supporting characters. When we get to Ocean Master, it’s going to be fun for all of us.

DA: Giving the supporting cast their own unique voice is important. I feel like you will get a sense of a culture and a community on dry land and in the ocean. The characters care about different things and interact in different ways. That’s an interesting thing to address in a comic book.

Aquaman: Rebirth #1, written by Dan Abnett with Brad Walker on art, is on sale now from DC Comics.

From the official issue description of Aquaman: Rebirth #1:

Born to both the surface and the sea, Arthur Curry walks in two worlds but can find a home in neither. The King of Atlantis looks to reconcile his split heritage as he embarks on a new mission that may finally make him choose between his two paths. 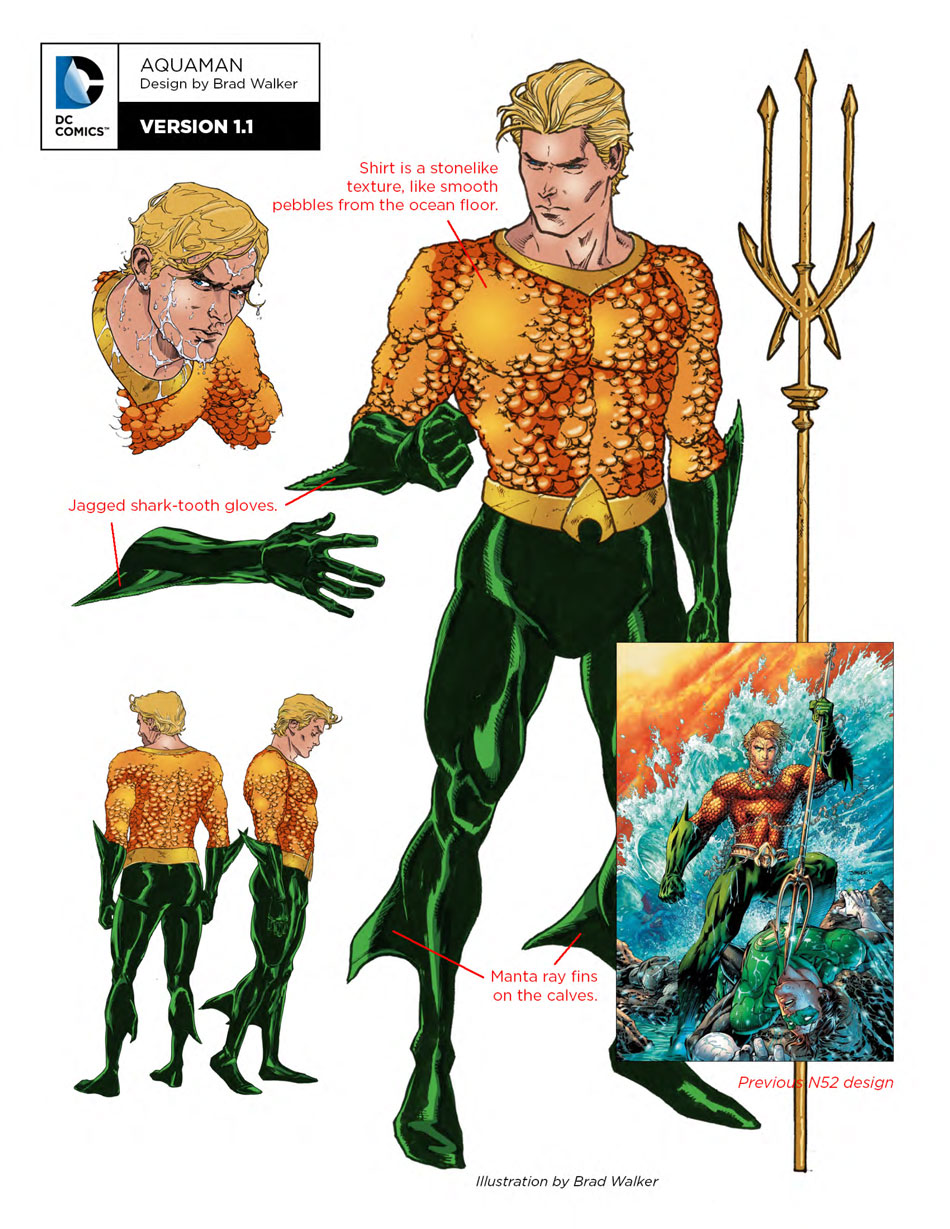