Superman ruling the world as a despotic tyrant. Batman leading an underground movement to stave off the former hero’s reign. If you’ve played the video game Injustice: Gods Among Us and read the comic book series that has spun off from it, you know that the world of DC’s heroes in this alternate universe is pretty bleak.

After five years of stories, writer Brian Buccellato, who’s guided the world of Injustice for the better part of that time, is bringing the tale to a close with Chapter 40, with a clash of the immovable force and unstoppable object that are the Man of Steel and the Dark Knight.

Mr. Buccellato spoke with me recently about playing in the world of Injustice, which characters he enjoyed writing most, and how the characters have evolved over the past five years. 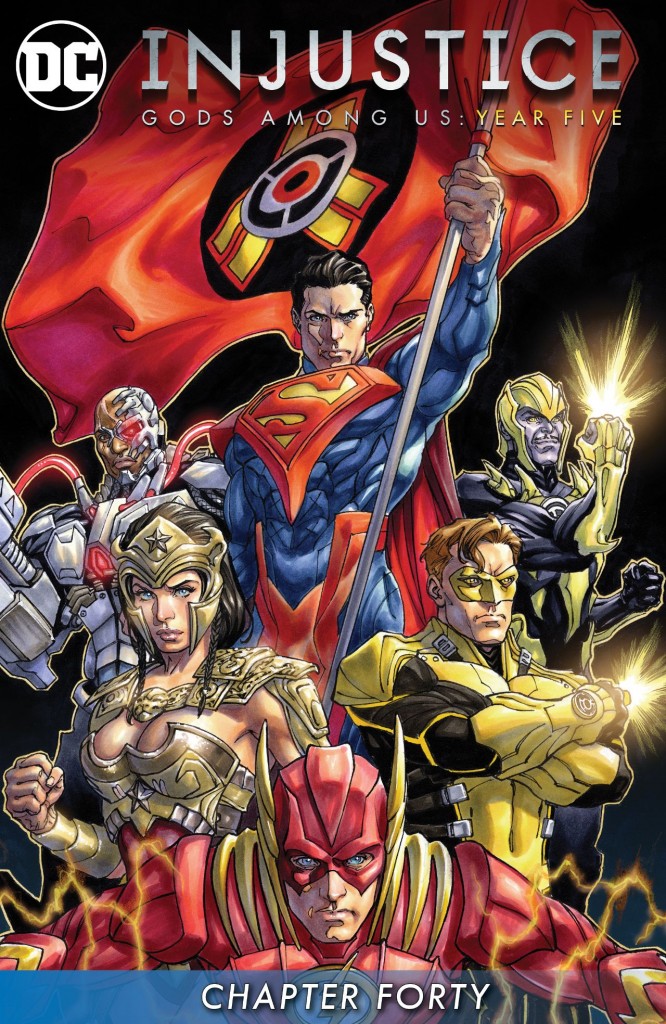 FreakSugar: You’ve been playing in the Injustice sandbox for quite some time now. Creatively, what’s unique about delving into this type of alternate world? Does it let you flex creative muscles that you might otherwise not be able to use?

Brian Buccellato: I think anytime you’re in an Elseworlds type situation, it opens the door to allowing you to things you can’t do in the main universe line. It comes with the territory. It’s very liberating. It flexes different creative muscles because some restrictions are removed. Restrictions aren’t necessarily a bad thing. They can help you creatively. But when restrictions are removed, it lets you look at the whole span of the history of the characters and pull from that and play against expectations you wouldn’t find in a normal book. So it’s really fun and a bit of a thrill to do that in the course of 40 to 50 issues.

FS: At the beginning of the final chapter, where do we find our cast? How would you describe the characters’ headspaces?

BB: At the beginning of chapter 40, things are pretty desperate for Batman. He’s lost a lot over the course of the past five years. People have died and every single trick up his sleeve has not worked. Superman’s regime has gotten stronger and more despotic and darker. Clark has come all the way around to being evil at this point. He’s a murderer

I think Batman is super desperate. Things are pretty bleak for him. Of course, he has this one last plan. Anyone who knows the Injustice: Gods Among Us game, you know that plan works out pretty well for him. It’s the darkness before the dawn. As for Superman, he’s so damn tired of Bruce. It takes so much energy to deal with him that he’s at his wits’ end. He’s debating crossing another line and possibly killing Bruce. 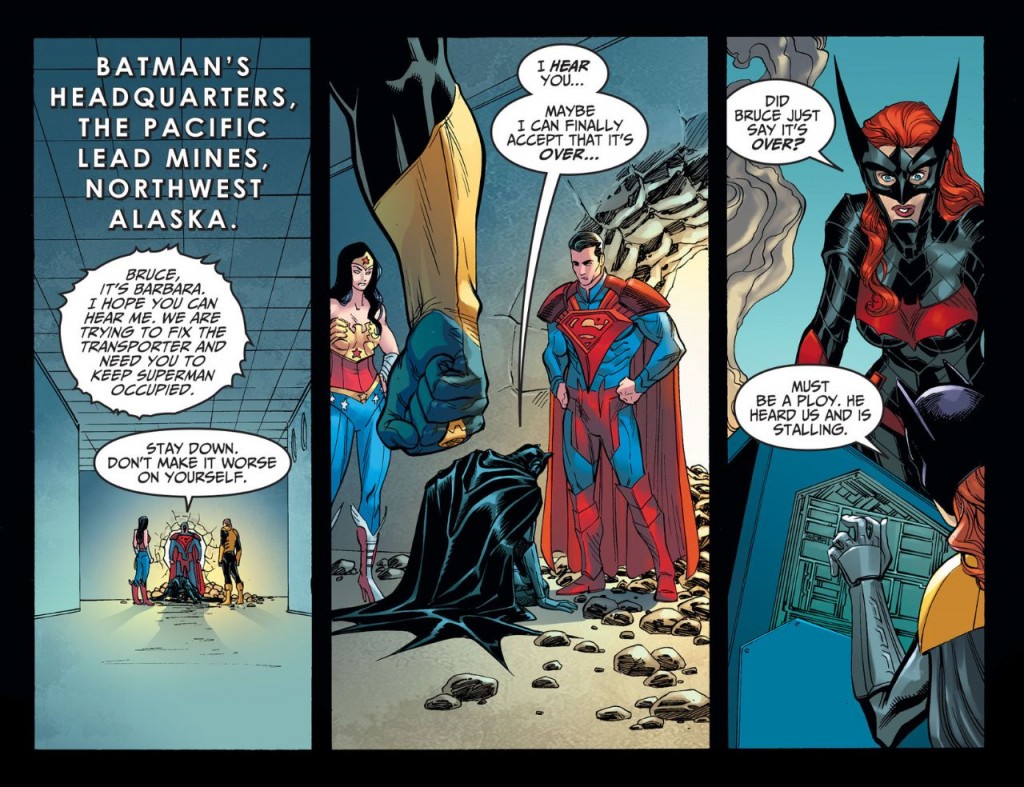 FS: We talked about how the series allowed you to exercise writing muscles you might not otherwise get to use. Is there a favorite character in the injustice universe you particularly enjoyed playing with?

BB: The easy answer is Harley Quinn because she’s so funny and unpredictable because she can go places that other characters can’t. She has no boundaries. She’s super smart, but she can do stupid things and get herself into trouble.

More specifically, what I like is to juxtapose characters and create relationships that are unfamiliar. I think [previous Injustice writer] Tom Taylor did a good job early on bringing in Lobo and pairing him with Harley. That’s why I brought Shazam into Harley’s life to make a strange coupling. For me, it’s about creating interesting relationships. 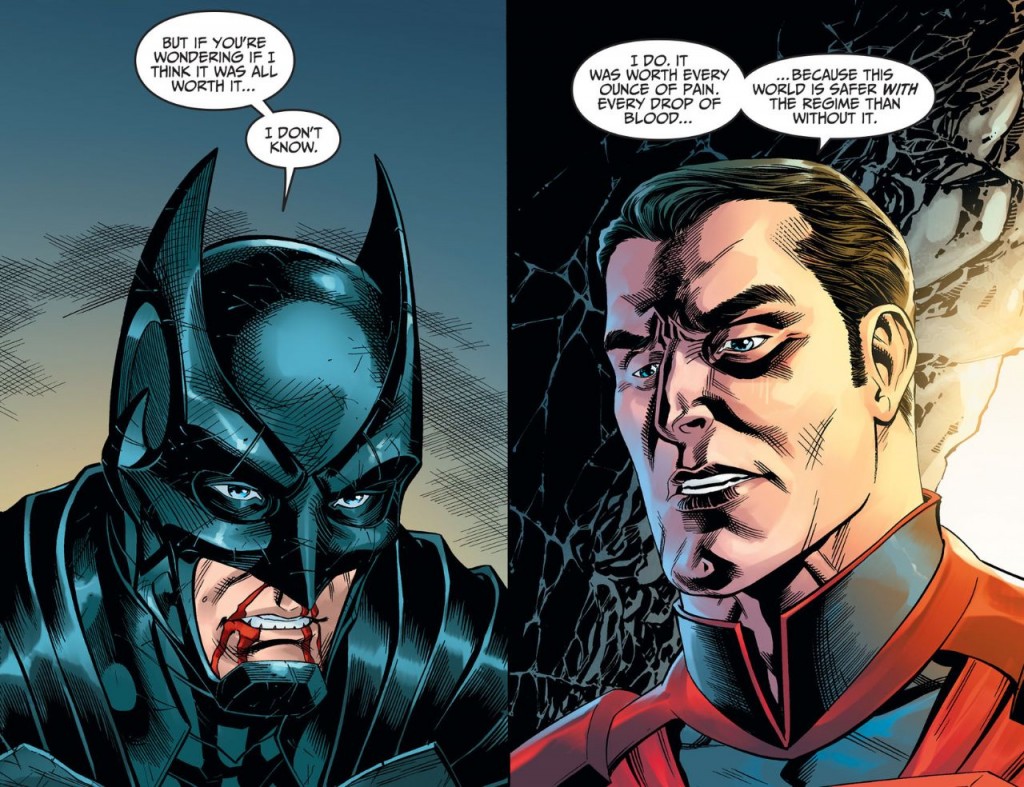 FS: Since we’re talking about character, in your mind, how have the characters, as seen in Injustice, grown from their inception to how you leave them at the end of 40?

BB: I think it’s clear that Superman has the biggest and most drastic arc out of everyone. When it starts, we really understand where he’s coming from, even though he did kill the Joker. As the years go by, though, and he does worse and worse things, we see his descent into darkness. His trajectory is pretty clear.

With Batman, he’s gotten a little darker, too. He’s made compromises and I’d say he’s not proud of all the things he’s done. But he’s still resolute in that he won’t kill. He won’t cross that final line. He does think Superman is wrong and needs to be stopped.

I think Barry Allen has been most affected by siding with Clark. He knows he’s compromised his ethics. My take is that Barry absolutely regrets siding with Superman. He’s one of my favorite and most forthright characters. I wish he was on the other side. 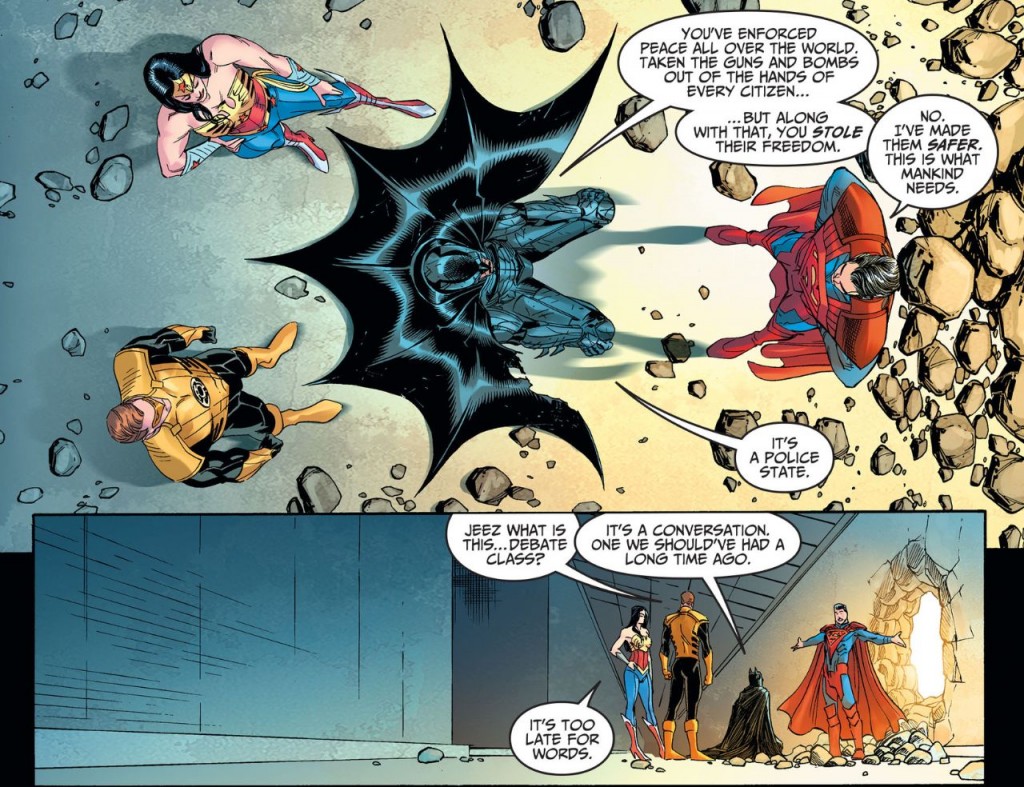 FS: For folks who enjoyed Injustice, can you tease what we might be seeing next?

BB: There’s going to be a whole new series following this one called Ground Zero, which will take the events from the video game story but from a unique perspective. It’s not just retelling the story, but giving the story from a new angle.

Injustice: Gods Among Us: Year 5 Chapter 40, written by Brian Buccellato with Mike S. Miller on art, is on sale now at www.readdcentertainment.com.

From the official chapter description:

Year Five concludes as the storyline leads directly into the first INJUSTICE game! Batman and his allies race against time-and a rampaging Superman-to bring over the duplicate heroes from the parallel Earth.