Since the first film hit theaters over three decades ago, the Highlander mythology—a tale of immortals battling one another, with only one victor possible at the end—has engaged audiences with its swordplay and psychology.

This Wednesday, IDW Publishing will debut issue one of Highlander: The American Dream, which is a direct prequel to the first 1980s film. Series writer Brian Ruckley spoke with us recently about the conceit of the series, where we find protagonist Connor McLeod in the book, and the psychological effects of immortality. 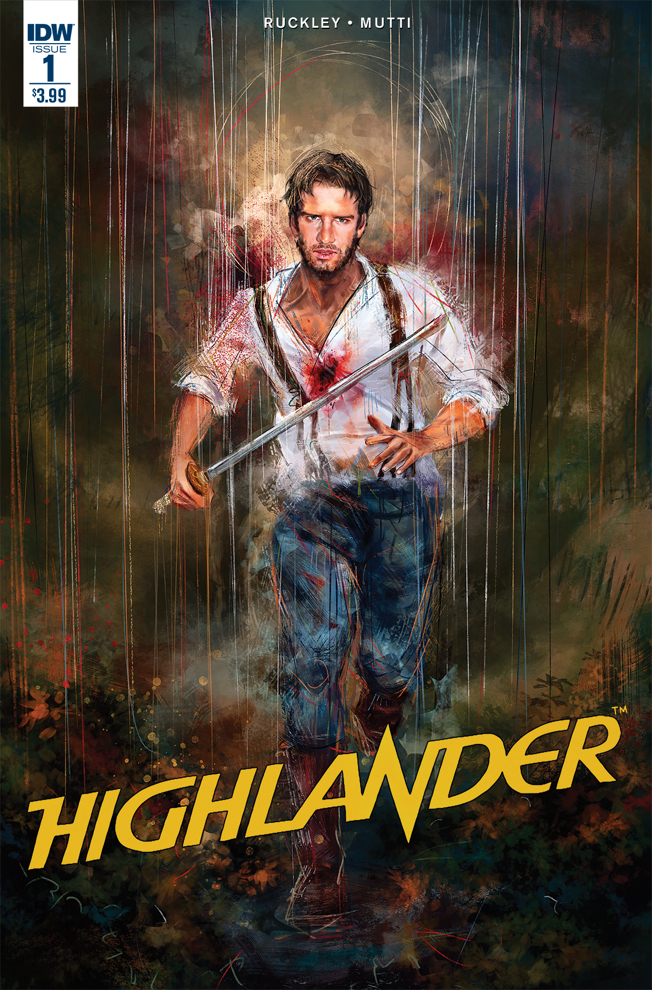 FreakSugar: For readers who might debating picking up the book, what can you tell us about Highlander: The American Dream?

Brian Ruckley: It’s a direct prequel to the original 1980s Highlander movie. It has sword-wielding immortals living secretly amongst us normal folk, fighting for the right to shape the world’s future. .It has Connor Macleod – the Highlander himself – centuries old, living and fighting in the United States. It has, in a way, the twilight of the immortals, because as anyone who’s seen the original movie knows, the end of their long, long violent game is getting very close …

FS: For folks who might not be as familiar with the Highlander mythology, how accessible is the book to new readers?

BR: Super accessible, I hope. That’s certainly the idea. The brief for this series was to take the mythology and inspiration from the original movie, and more or less only that movie. I’d say that’s still the purest and best and simplest expression of the Highlander ‘idea’, so it’s also the most accessible version of the mythology.

Although there’s stuff in there hardcore fans of the original movie might recognize as slight Easter eggs, I tried pretty hard to make sure no one needs to have even seen it to enjoy and make sense of the comic. I’d be utterly delighted if this was someone’s first ever exposure to Highlander stuff and it got them interested enough to go and check out the movie after reading it! 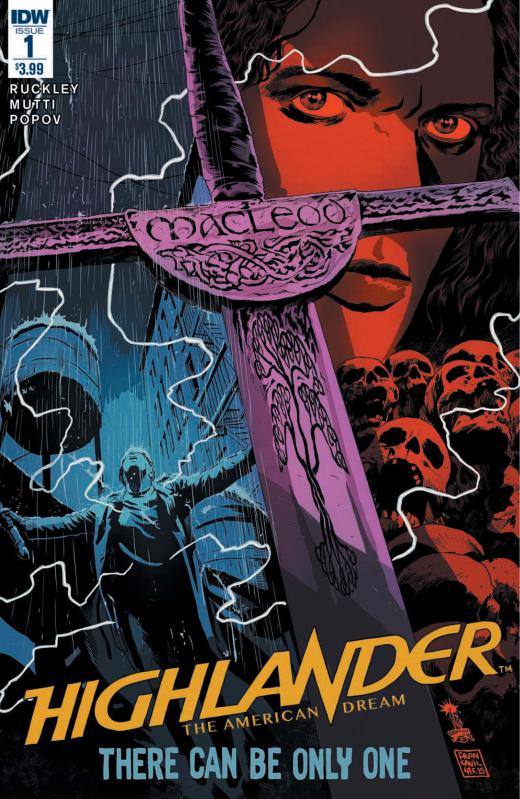 FS: Where do we find Connor McLeod at the beginning of The American Dream? How does this book fit chronologically with what’s come before?

BR: This story basically runs from the American Civil War all the way up to the original movie, which is set in 1985, so it’s a true prequel in that sense. Back in the 1860s Connor’s not in a fantastically great place, to be honest. Anyone who lives for hundreds of years is bound to hit a few bumps along the way. And the Civil War is the kind of experience that could make anyone who lived through it question their assumptions about all sorts of things, I’m sure.

FS: How would you describe Connor’s psychology and state of mind, as a whole? Is being immortal something that wears on him, like he’s seen too much?

BR: If you live as long as he does – he was born early in the 16th century, after all – you can’t help but see too much, I’d guess. And something that’s pretty clear from the original movie is that the immortals don’t really have a complete, satisfactory answer to the question of how and why they exist. That wears on most of them, in subtle or unsubtle ways, given that they have centuries to wonder about it.

Some immortals go crazy under the strain of living, some are just bad to the core (really, really bad as this story makes pretty clear), some try to figure out a positive purpose. They come in all flavors, just like us mortals. Connor has questions and doubts and sorrows and bad times; he’s basically a good guy, but not by any means a paragon of sober virtue. He’s been wounded by his experiences.

How and why his psychology and state of mind develop over the years is one of the points of the series, really. That and sword fights. 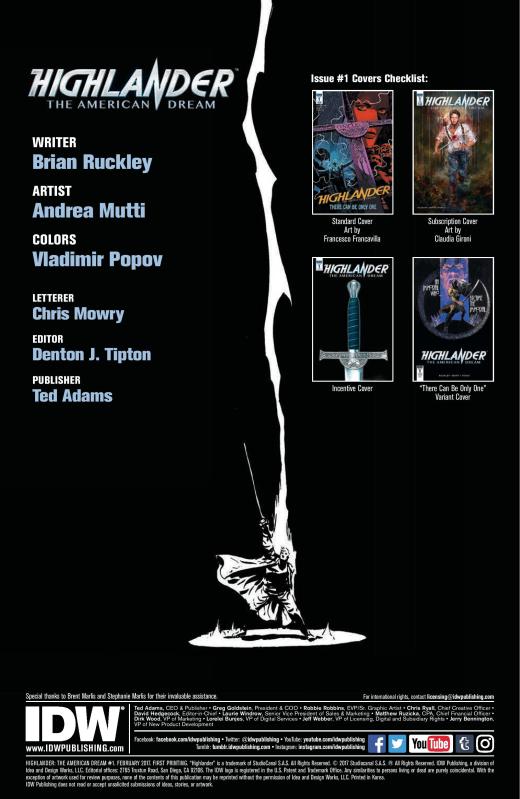 FS: Osta Vazilek, another immortal, comes to discuss a gathering of other immortals approaching. How would you describe that gathering and what are the stakes, not just for the immortals, but the world at large?

BR: The Gathering is the endgame, the time when all the surviving immortals are drawn together to fight for the Prize. Bottom line is, they all know only one of them is going to survive (which is the kind of knowledge that would mess with your head), but that one will win immense power and the ability to shape the future of all humanity. They could take the whole world into darkness or into light. So it’s high stakes, because there are certainly immortals who would be seriously bad news for humanity if they won the Prize …

FS: In this issue, we got to see Connor and Osta’s meeting during the Civil War and the preview for next issue suggests a look to early 20th century America. What other time periods will you explore? How will those eras impact Connor and Osta’s respective worldviews?

BR: There are fleeting glimpse here and there of quite a few time periods, but the series has three main settings: the 1860s, the 1950s and the 1980s.

There’s a connection between at least the first two of those time periods: war. The Civil War, obviously, and then the aftermath of World War II. Something that jumped out at me from the movie was that Connor was in Europe for the Second World War, and that – for someone who has seen other wars at first-hand over centuries – is something that might easily change your world view a bit. I very specifically wanted to see Connor (and Rachel) shortly after that experience, with a bit of time to reflect on it.

But I’ll also admit I chose the 1950s partly because I wanted to see some immortals dressed in sharp Mad Men-style suits.

As far as Osta Vazilek’s concerned, I did something with him that’s not even hinted at in the movie, so let’s leave that as a surprise for readers. But I will say, his worldview is kind of central to the series. 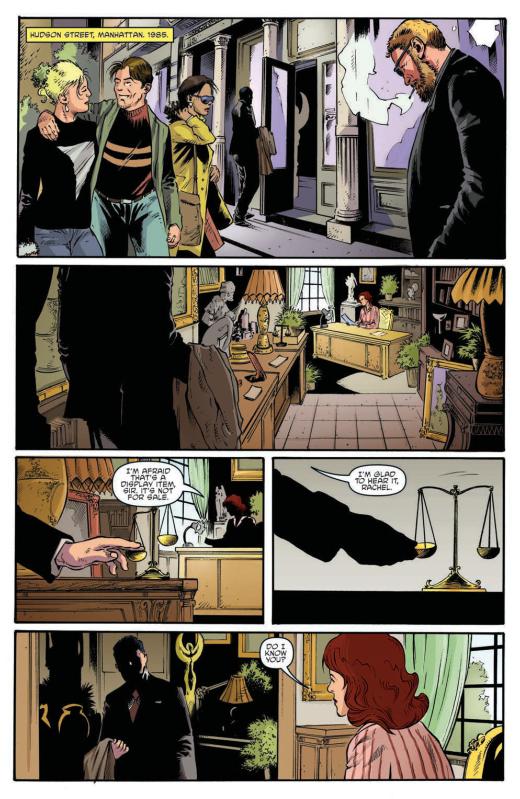 FS: Andrea Mutti’s work is always gorgeous; I became a big fan during his work on Dark Horse’s Rebels. What was the collaboration process like working on the story?

BR: Yeah, Andrea’s a bit of a star, no doubt. Him and Vladimir Popov, who’s doing the colors, have turned in some lovely stuff on this series. Everyone involved in producing this comic is trying to make everyone else look good, which is exactly the place you want to be and makes for an enormously fun collaboration.

It’s not easy, from an art point of view, to deal with three different time periods, with their own looks and feels, in a single comic series. I mean, Andrea deserves some sympathy for what I’ve put him through: I’ve asked him to draw horses and cowboys, skyscrapers and woodlands, Civil War soldiers and NYPD officers, a Model T Ford and a 1980s motorcycle, flappers and sailors, half a dozen different kinds of swords.

There are subtle little things Andrea and Vladimir have done to give each setting its own vibe. The kind of stuff I would barely even know how to ask for in the script, but I don’t have to because they know what they’re doing and bring their own smart ideas to every issue.

FS: Were you a fan of the Highlander movies and TV series prior to coming onto the book? Were there any particular bits of Highlander lore you wanted to make certain to include in the series?

BR: I was absolutely a fan of the original movie. Totally. Immortals living secret lives over centuries, fighting each other with crazy cool swords. How could anyone not like that? I mean, I’m sure there are people who don’t, but that’s my kind of thing.

The subsequent movies? It’s a long time since I saw them, if I’m honest, but I’m not sure they bring much to the table that the original movie hadn’t already served up in a tastier version,. And I’ve only seen little bits of the TV series here and there, though I know quite a lot about it. Fortunately, as I said, the idea for this series was to stick to the first, original movie, so that was right in my wheelhouse.

As far as bits of the lore I wanted to include, I kept it fairly simple. Swords. Immortals. Holy ground as sanctuary. Rules, of a sort, to the deadly game the immortals are playing. If anything, the most important elements I took from the movie and expanded on are characters: Rachel Ellenstein and Osta Vazilek. (And Osta doesn’t even appear in the movie as an actual character, just a name and a photo). In a way, they’re the bits of lore I most wanted to bring on board. 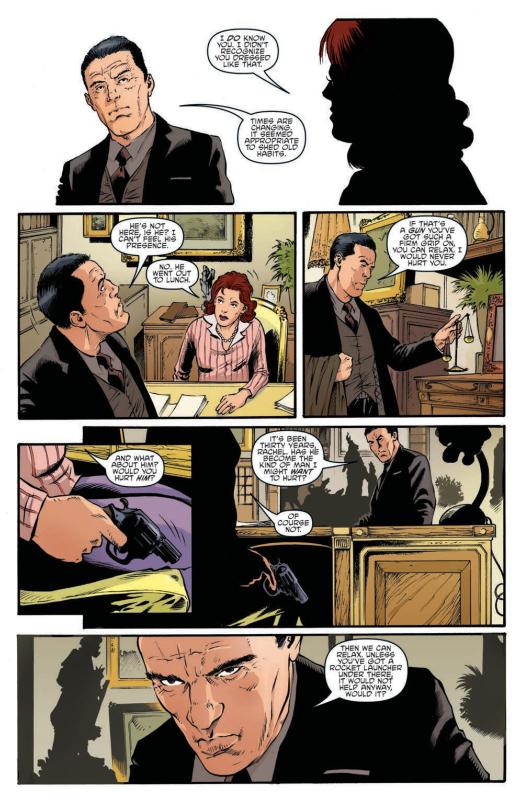 FS: Is there anything you can hint at about what’s coming down the pike in the series?

BR: Ummm … well, to state the obvious, Connor and Osta are not the only immortals in the series. And other immortals are not the only problem Connor has; there are mortals lining themselves up to cause him some pretty serious difficulties as well. Also, there’s whisky. And wrestling. And swords. Did I mention the swords?

Highlander: The American Dream, written by Brian Ruckley with Andrea Mutti on art, is on sale this Wednesday from IDW Publishing.