Charlie’s Angels and The Bionic Woman occupy a special place in the hearts of so many as being well-rounded, fully fleshed-out, tail-kicking characters which resonated immediately with so many. From their origins on the small screen to branching out across multiple forms of media, the trio of Kris, Julie, and Kelly and Jamie Sommers have seen their stories continue well after they’ve left television. In fact, this fall, a new Charlie’s Angels film is set to hit theaters, helmed by director and actor Elizabeth Banks, a reimagining of the Angels mythos.

But that’s not the only place where you can get your fill of Charlie’s Angels—or the Bionic Woman, for that matter. This July, Dynamite will treat readers to a meeting of the two franchises in Charlie’s Angels/ The Bionic Woman, written by Cameron DeOrdio with Soo Lee on art. In the miniseries, the Angels and Jamie butt heads as they both attempt to get their hands on a patent that has dangerous implications for the world at large. While Jamie and the Angels have the planet’s best interests at heart, it’s clear that they’re not going to see eye-to-eye on how best to handle the situation.

We are all kinds of jazzed for this miniseries: Not only are the Bionic Woman and Charlie’s Angels properties that trigger feelings of nostalgia and fun in us, but the miniseries could not be in more capable hands. DeOrdio knows his way around writing awesome females lead, as seen in his work on Josie and the Pussycats. And Lee is bringing linework that screams the 1970s, while making sure to lay on the action.

I spoke with Cameron DeOrdio and Soo Lee recently about the idea behind Charlie’s Angels/The Bionic Woman, how the project came to be, and their excitement about working on the two properties. 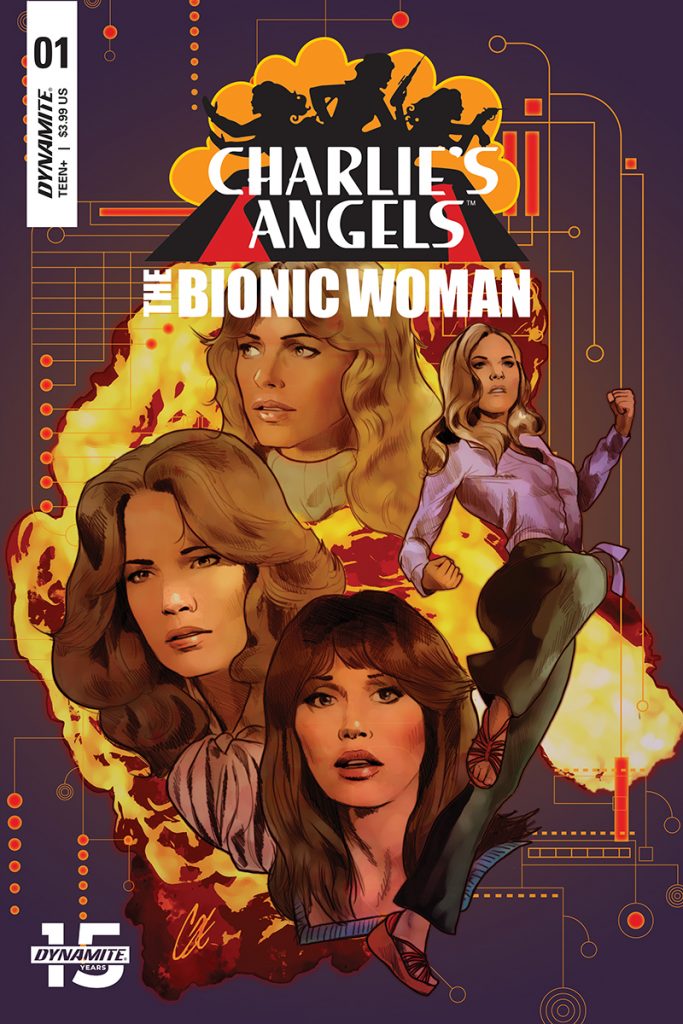 FreakSugar For folks checking this out, what is the conceit of the Charlie’s Angels/The Bionic Woman series?

Cameron DeOrdio: The year is 1983, and the Reaganites have already begun privatizing everything they can get their hands on – including, in our story, the Office of Scientific Intelligence (OSI), which is responsible for bionics. When OSI was shuttered in favor of a hodgepodge of private companies, its patents were sold off, including one that should not have been: the formula for a chemical with powerful military applications or, used in another way, incredible healing powers. We follow Charlie’s Angels as they try to retrieve the formula from the private military contractor that aims to profit off its sale to U.S.-friendly forces so the chemical’s inventor can put it to better use. We also follow the Bionic Woman, whose faith in her friends and the company that took her in will be tested as she works to defend a dangerous secret from unknown operatives.

Soo Lee: I’m excited to see how people react to this story. The reception so far seems good, and there is a Charlie’s Angels movie following our fourth issue, and I think it’s generating a lot of buzz thanks to that, as well. I don’t know what’s going to happen in that movie, but I’m confident we’re going in a unique, but recognizable, direction. These are two titles people are already familiar with, and I think they are looking forward to seeing them come back. Even my mom, who’s also a big fan, was thrilled about the news. Thanks, Mom! 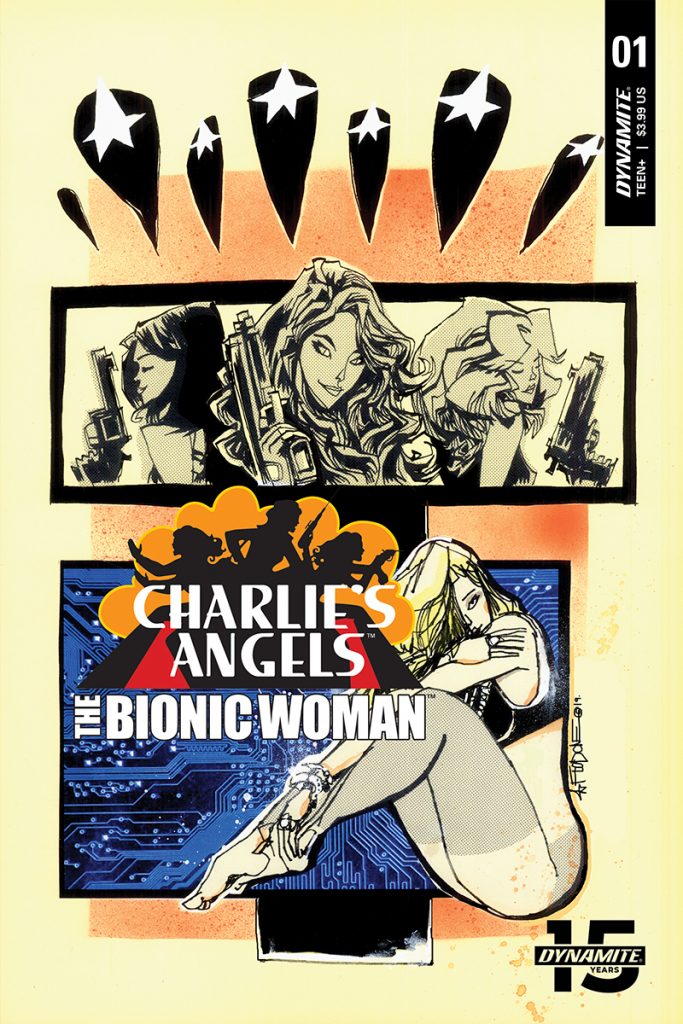 FreakSugar: Both Charlie’s Angels and The Bionic Woman are beloved by so many. What was the genesis of this crossover event?

Cameron DeOrdio: With crossovers, it’s always about mapping out where things intersect and where they diverge. What do these characters/properties have in common? Where do they come into conflict? The answer that formed the germ of the idea that became this story actually owes a great deal to a Mystery Science Theater 3000 riff from a favorite episode of mine, Riding with Death. Riding with Death is a 1976 made-for-TV movie, and the MST3K episode is chock full of jokes about the Bicentennial, The Mary Tyler Moore Show and other ‘70s miscellany. At one point, MST3K’s Mike ventriloquizes, “Boy, I sure hope it never stops being the ‘70s, or we’ll all be in trouble.” That got me thinking about what would happen to these characters as they entered the colder, hypercapitalistic 1980s.

FreakSugar: Where do we find the Bionic Woman and the Angels at the beginning of this series?

Cameron DeOrdio: The Angels are more or less where we left them at the end of the original series. The team is Kris, Julie and Kelly (with help from Bosley, of course). With the end of OSI, Jaime has taken a job with the contractor that bought out most of OSI’s patents and hired away Oscar Goldman in one fell swoop. 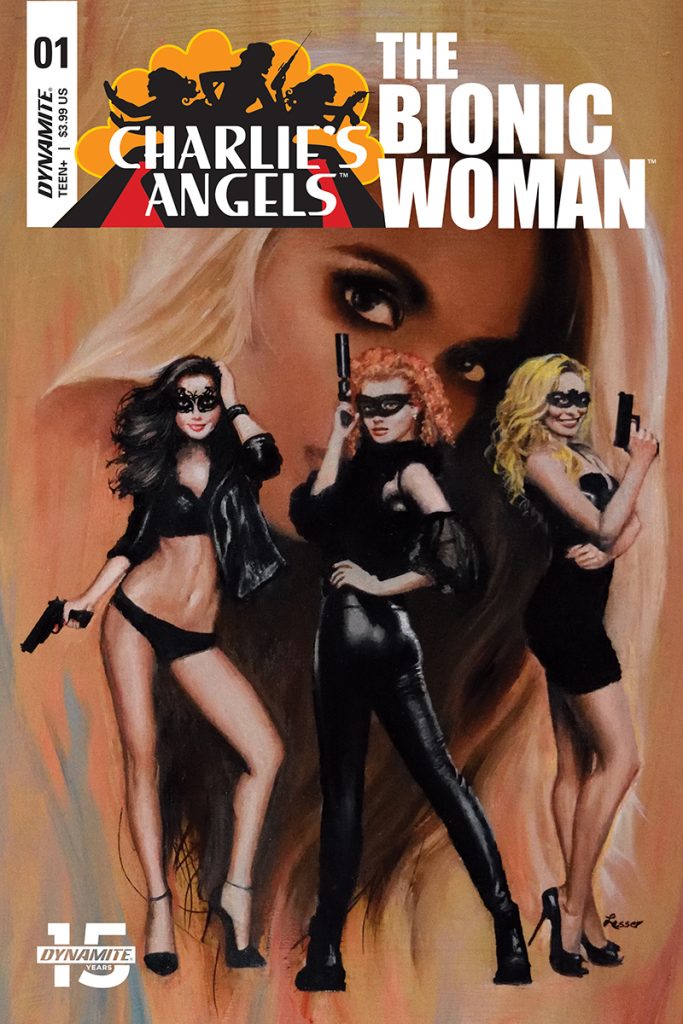 FreakSugar: I was wondering if you could talk about the design of the series. Charlie’s Angels and The Bionic Woman have such distinctive looks to their TV series; it’s part of the reason they’re burrowed in our consciousness. What was the approach to designing the characters for the series?

Soo Lee: Well, I couldn’t draw the characters in the comic to the likeness of the actors, but I did want to keep true to their styles from the TV series. I really love how stylish they were in every episode and wanted their outfits in the comic to reflect their personalities as much as the design of the characters themselves. It’s also honestly just really fun getting to draw ‘70s fashion.

FreakSugar Charlie’s Angels and The Bionic Woman are properties that folks have a good deal of fondness for. As you said, there’s even a Charlie’s Angels remake film in the works. What is the appeal of working on these two franchises?

Soo Lee: Both titles are so iconic that I had to jump on the opportunity when I was asked to be a part of the comic. I was already a fan of both series, and these were characters I admired and find inspiring, as a creator. It truly is a dream come true to be able to bring these characters to life again in my style. It’s both nerve wracking and very, very exciting.

Cameron DeOrdio: I’d grown up on the early-aughts Charlie’s Angels movies and even caught a little of the short-lived 2007 Bionic Woman reboot. Meanwhile, these franchises were originally hugely popular when my parents were teenagers. A lot of people see these characters as emblematic of the time they came out of, so I wanted to take that and use it to sort of show the growing pains of moving from one decade, one generation, one age to the next. And to tell a fun, exciting story that people will enjoy, of course. 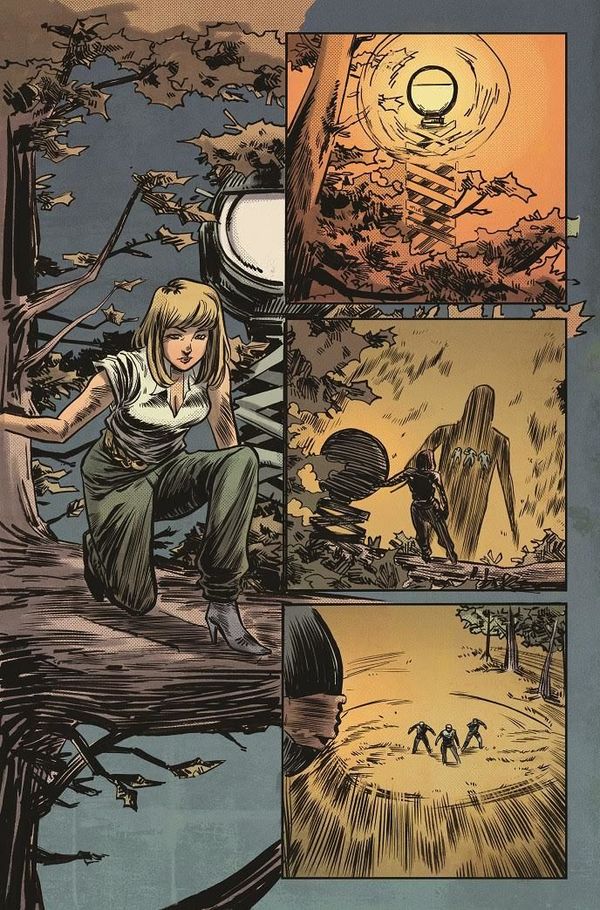 FreakSugar: Is there anything you can tease about what we can expect to see in the series going forward?

Cameron DeOrdio: We never leave a dog behind.

When Charlie’s Angels pick up an assignment to steal a dangerous patent and put it back in the hands of its mysterious inventor, they encounter their toughest counterspy yet: The Bionic Woman, Jaime Sommers. This new series follows two of television’s top teams after their programming run and into the 1980s. When the Office of Scientific Investigation is privatized and its patents sold off to the highest bidder, a military contractor looks to take bionics to the battlefield. Will the Bionic Woman be able to protect the patent from the would-be thieves, or will the Angels prevail, mothballing the formula’s military applications in favor of medical uses?