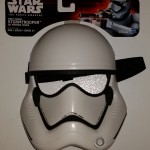 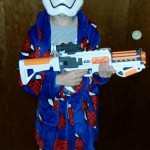 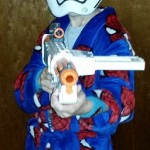 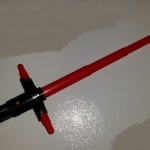 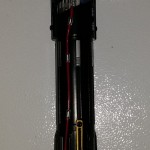 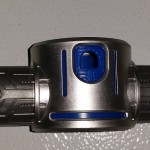 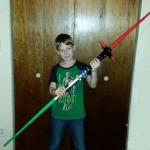 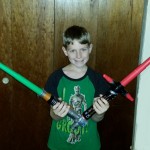 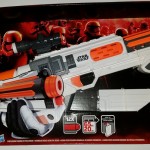 Back to our catch-up look at a number of recent Star Wars toy and collectibles releases!

First Order Stormtrooper Mask: Quality masks and helmets have been a Hasbro staple for a while now. This simple mask has a good design and arrives at a fairly inexpensive price point ($8 to $10 in most locations). The mask easily attaches with an elastic strap and sturdy Velcro grips. The strap may not fit around the largest of heads, but it works great for kids (which is the primary audience for this sort of role-play accessory).

NERF First Order Stormtrooper Rifle: This is a fine piece of work. You almost don’t have to explain NERF or even attempt to sell NERF at this point. Hell, it’s almost impossible to REVIEW anything from NERF. NERF has delivered far more suction-cupped hits than misses over time, and this is definitely a hit. This model features a fine sculpt that includes a removable sight, a removable shoulder stock and a removable clip. The clip holds all twelve darts that come included with the rifle. Reload off of the clip is a simple slide-and-fire. The box claims an effective range of about 65 feet, and I’d say that’s fairly accurate. In the pictures, you’ll see my son Kyle pairing the mask AND the NERF Rifle (along with his beloved Spider-Man bathrobe. Not the most effective outfit for battling the Resistance, but what can you do?).

BladeBuilders Lightsabers: BladeBuilders take the lightsaber concept into new directions, providing pieces that allow attachment and customization. This is a nice value-add for the lightsaber toy, which has been a consistently popular product for years. In the latest iteration of the less expensive Extendable Lightsaber (as opposed to the Electronic Version), we looked at the (green) Luke Skywalker variety and the new Kylo Ren saber. The boys enjoyed the Luke (and liked being able to play with a different version; they have an Electronic), but they flipped for the Kylo Ren take. Some fans may have initially been grumbly about the design, but not so young boys. Connor and Kyle really enjoyed the design. The “flick” action blade extension is really easy for kids to pick up on, and the overall toy looks nice AND can take a bit of a beating.

In the photos, Connor demonstrates a couple of options for one of the basic BladeBuilders connectors. There’s the “Darth Maul” double-bladed pose, and there’s a separate V (or right-angle) take. Granted, the second one isn’t super practical in battle, but the boys have had some fun with it.

Thanks again for reading! Next time we’re going to look at the basic Remote Control BB-8 and the Black Series 6” Kylo Ren, among others. And coming soon, we’ll pivot to some Marvel Legends for Catching Up pieces on the recent Hulkbuster and Rhino assortments.

Now, over to you: What has been YOU favorite Star Wars product of the past couple of months?

Troy Brownfield is a writer of comics and a FreakSugar contributor. Kyle has tried to gut him with a lightsaber. Yet.