2019 will be a helluva year for Hellboy.

The comic book character Hellboy–the demon on the side of light–celebrates his 25th anniversary on March 23, 2019 and to mark this milestone, Dark Horse Comics–publisher of Hellboy’s adventures–is celebrating by the big lug with Hellboy Day on that date! In addition to Dark Horse encouraging retailers to hold special events and sales on Hellboy titles, Hellboy creator Mike Mignola will attend a special signing at Earth Comics in Sherman Oaks on that day. The publisher will also offer retailers promotional materials to give away to customers, including a double-sided poster and Mignolaverse timeline that debuted at this year’s New York Comic Con.

With the new Hellboy film hitting in April of next year, 2019 will be the hero’s year! To find out more on how to celebrate along with everyone else, check out the press release below. 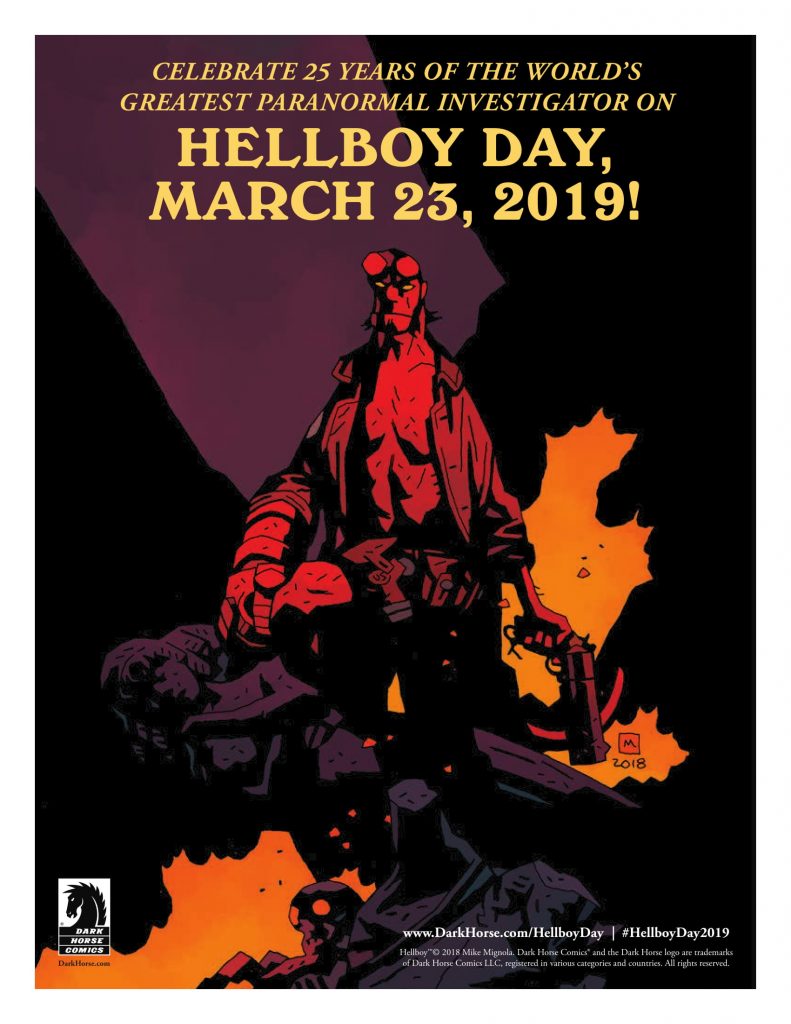 Next year, on Saturday March 23, 2019, Dark Horse Comics will celebrate the 25th anniversary of legendary comic book creator Mike Mignola’s most famous creation with Hellboy Day. In 1994, Dark Horse Comics published the debut issue of Hellboy: Seed of Destruction and introduced comic book readers to the Right Hand of Doom, the Bureau for Paranormal Research and Defense, and one of the most iconic comic book characters—and universes—of all time. For 2019’s Hellboy Day celebration, Dark Horse will publish a 25th anniversary, promotional edition of Hellboy: Seed of Destruction issue 1, featuring a new cover by Mignola and colorist Dave Stewart, which will be given away at participating comic book shops; and select stores across the country will host Hellboy Day events.

“When I created Hellboy way back when I never imagined he would be around long enough to celebrate a 25th anniversary,” said Mike Mignola. “I’m grateful to the writers, artists, colorists and letterers who’ve joined me in telling Hellboy stories for all these years. And, of course, so grateful to the fans. This thing could not exist without their support and it’s a pleasure every time I get to go out to meet them.” Mike Mignola will appear at a Hellboy Day signing at Earth 2 Comics in Sherman Oaks in Los Angeles on March 23.

Dark Horse is inviting comic book retailers to celebrate this milestone anniversary for the world’s greatest paranormal investigator by holding store events and sales of Hellboy titles. In addition, Dark Horse will be creating a series of Hellboy Day promotional materials for retailers, including a Hellboy Tattoo Sheet, a Right Hand of Doom bookmark, a window cling, an open/close sign, and a new, folded version of the Hellboy double sided poster and Mignolaverse timeline that debuted at New York Comic Con. Retailers will have the chance to order promotional, giveaway materials and are invited to take advance of additional backlist sale pricing in order to hold celebrations at their stores. Qualifying retailers who take advantage of backlist sales promotion will be automatically entered to win special prizing packages from Dark Horse.

“Hellboy fans: please make sure to tell your retailer you want your local store to participate in this awesome celebration today,” said Matt Parkinson, Dark Horse Vice President of Marketing. “And retailers: look for the December Previews for February on Sale (Issue #363) for details on backlist sales and contest deals, as well as ordering information on the promotional material being created for the event.”

For nearly 25 years, Mignola and a host of celebrated writers and artists have chronicled the adventures of Hellboy facing his supposed destiny as Beast of the Apocalypse, and explored the mysterious backstories of B.P.R.D. agents including Professor Trevor Bruttenholm and Abe Sapien. Hellboy’s adventures have appeared in what are known as the Mignolaverse — the strange, shared universe of comic books and graphic novels, comprised of acclaimed titles including Hellboy & the B.P.R,D., Abe Sapien, B.P.R.D., Crimson Lotus, Frankenstein Underground, Lobster Johnson, The Visitor: How and Why He Stayed and Witchfinder. Hellboy has appeared in graphic novels and comic books, prose novels and short story collections, two animated features, two live action films, toy lines and all manner of merchandise. Neil Marshall’s forthcoming Hellboy film starring David Harbour, Sasha Lane, Ian McShane, Penelope Mitchell, and Milla Jovovich will be released by Lionsgate on April 12, 2019.

For more information about the Mignolaverse comic books and graphic novels, as well as announcements of Dark Horse Comics’ plans for 2019 to celebrate the 25 year anniversary of the first Hellboy comic book, Hellboy: Seed of Destruction, follow the company on Twitter, Facebook and Instagram.