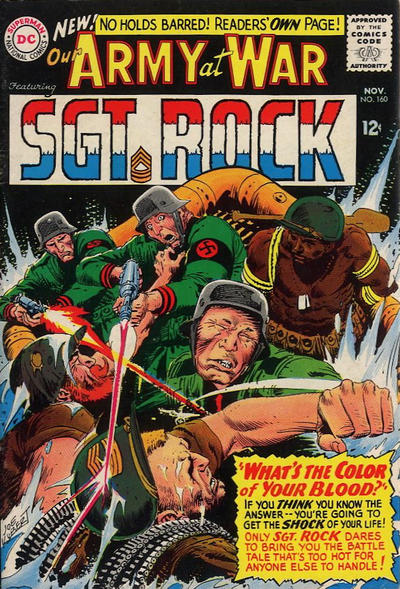 In response to the neo-Nazi/white nationalist rally in Charlottesville, VA this past weekend, comic writer/historian/activist Gail Simone asked comics fans to post pictures of comic book heroes fighting Nazis under the hashtag #ComicsHateNazis. Needless to say, the response was immediate, immense, and the tag was soon trending in a big way across multiple platforms. People posted image after image from throughout comics history showing superheroes punching Nazis or destroying swastikas and other Nazi symbols, and it was good – an affirmation that the medium we all love so much had consistently stood against such a repugnant ideology. Yet in all the panels showing the tights-and-capes crowd taking it to the fascists, I found it odd that no one had apparently posted any images from the vast field of war comics. So, I decided to post one of my own, and one issue immediately came to my mind: Our Army at War #160, from November of 1965.

Of course, fighting Nazis was the bread and butter of American war comics, but at their best, war comics often used that basic premise as a vehicle for commentary on the contemporary culture, and when done right, that commentary was devastating. Enter OAAW #160’s main story “What’s the Color of Your Blood?” written by Robert Kanigher with art by Joe Kubert. The story centers around Jackie Johnson, an ahistorical African-American GI serving in Sgt. Rock’s otherwise majority-white Easy Company (historically, during WWII, US Army units were segregated). First introduced in 1961 in OAAW #113, Jackie Johnson was one of the first non-stereotyped African-American characters to appear in mainstream comics, and the character’s total acceptance as just another incredibly capable “combat-happy Joe of Easy Co.” remains one of the most powerful anti-segregation, anti-racist statements in comics, particularly coming as it did during the height of the Civil Rights Movement. 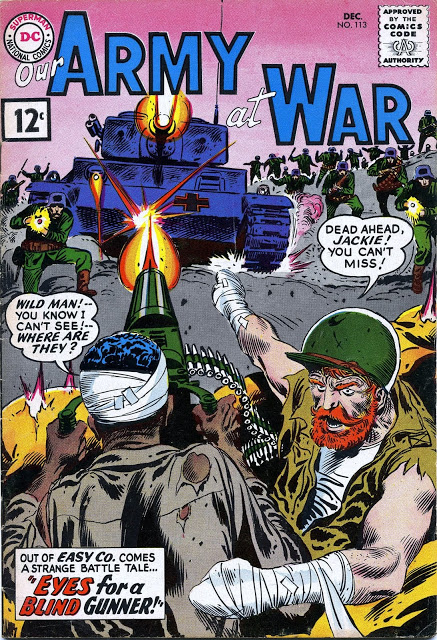 Four years later, Jackie had evolved into a kind of combination of Jackie Robinson and Joe Louis, as a former world heavyweight boxing champion who had been defeated before the war by “Storm Trooper” Uhlan in Madison Square Garden, where Uhlan served as an exemplar of the Nazi’s Aryan racial ideal. In the comic, Rock, Jackie, and Wild Man have been captured by a German paratrooper unit led by none other than “Strom Trooper” Uhlan himself. The story centers around a rematch between Uhlan and Jackie, intended by the Nazis to underline their racial superiority. Throughout the match, Uhlan demands that Jackie admit that his blood isn’t red like a man’s but black – inferior. There are some twists and turns in the story, and the reader is treated to some more of Jackie’s backstory along with a retelling of the events in OAAW #113, but the climactic moment lands like a bomb. For my money it’s one of the greatest moments in comics, and was my contribution to #ComicsHateNazis: 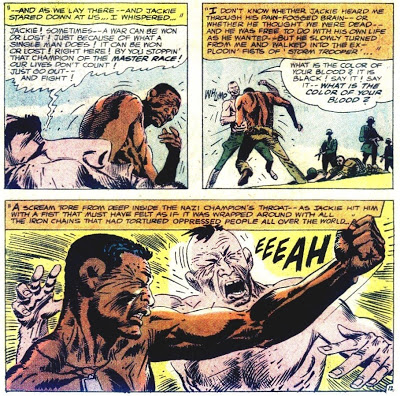 Our Army at War #160, script by Robert Kanigher, art by Joe Kubert.

With this story Kanigher and Kubert unflinchingly linked Nazi and American racism directly, refusing to see any difference. To cap things off, the issue ends with Jackie unhesitating volunteering to give Uhlan a lifesaving blood transfusion. It is not only a refutation of the pseudo-science of racism, but a declaration that a person’s worth has nothing to do with genetics, and everything to do with their character. Facts which are as true today as they were then. 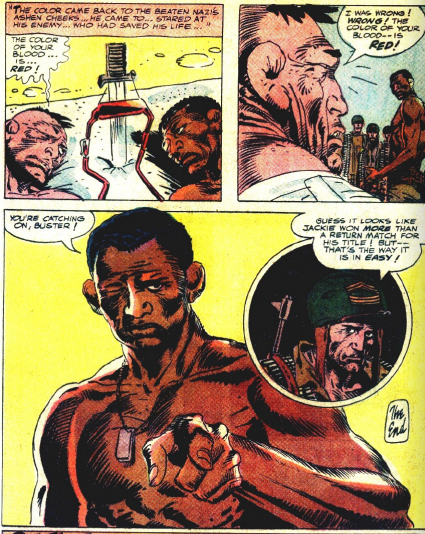