The Death of Stalin is a brilliant, darkly funny portrait of the machinations of the powerful, and a deeply moving study of the people who are both the victims of – and victors over – their rulers. In short, this book has soul. 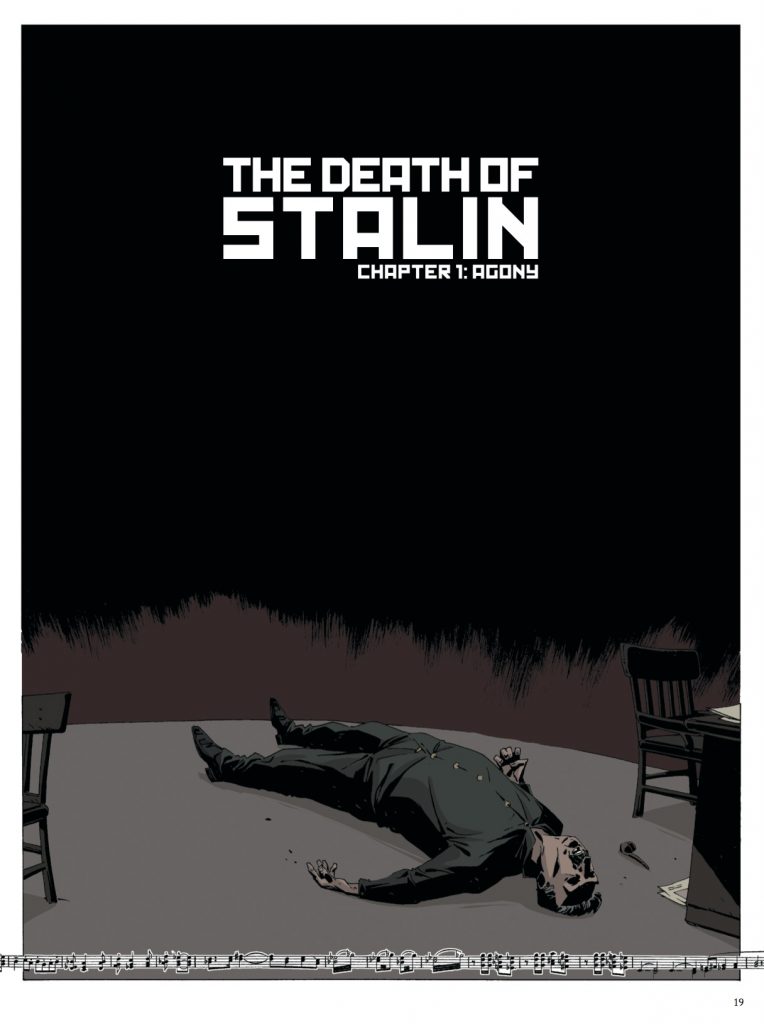 The Death of Stalin p.19, art by Thierry Robin.

This month, Titan Comics releases the first English translation of The Death of Stalin, written by Fabien Nury with art by Thierry Robin. Originally written in French, the graphic novel has attracted international attention as the inspiration for the forthcoming eponymous, star-studded Armando Giovanni film. The book chronicles the period from March to September 1953, from the night Stalin suffered an ultimately (but not immediately) fatal stroke to Khrushchev’s seizure of power later that year. Joseph Stalin ruled the Soviet Union from April of 1922 to March of 1953 more absolutely than any Czar, and with a ruthlessness that has become legendary. He was feared, but he was also widely beloved by the Soviet people (and remains so among many Russians even today). Nury and Thierry open their work with a caution that while the book is based on historical events, it is a work of fiction, although they note that their fiction is less strange than the actual events surrounding Stalin’s demise. 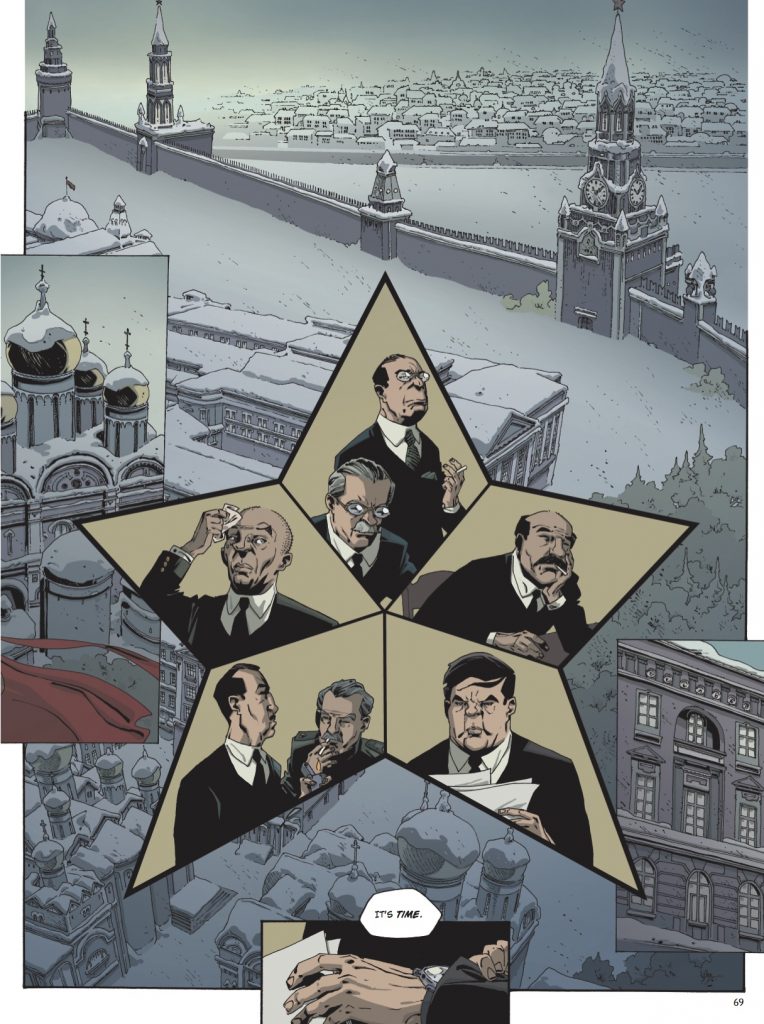 Like many successful dictators, Stalin was a genius at disassociating himself in the eyes of the public from the abuses of his regime while firmly establishing himself as the fount of its successes. Beyond his carefully designed and maintained public image, however, Stalin was a man who ruled through fear, and who held absolute power of life and death over tens of millions of people. After 53 years of rule, in many ways, Stalin was the government of the Soviet Union, and was certainly the only leader many citizens had ever known. At the time of Stalin’s stroke, the seven members of the Soviet Council of Ministers were ill prepared for a transition of power, as Stalin had deliberately kept the chairmen busy trying to maneuver against each other rather than him. The following few days, as Stalin lingered, slipping in and out of consciousness, were witness to repeated rounds of plotting and rejoicing at his impending demise, followed by overwrought scenes of joyous relief and performances of loyalty when it seemed that the “Man of Steel” might just recover. 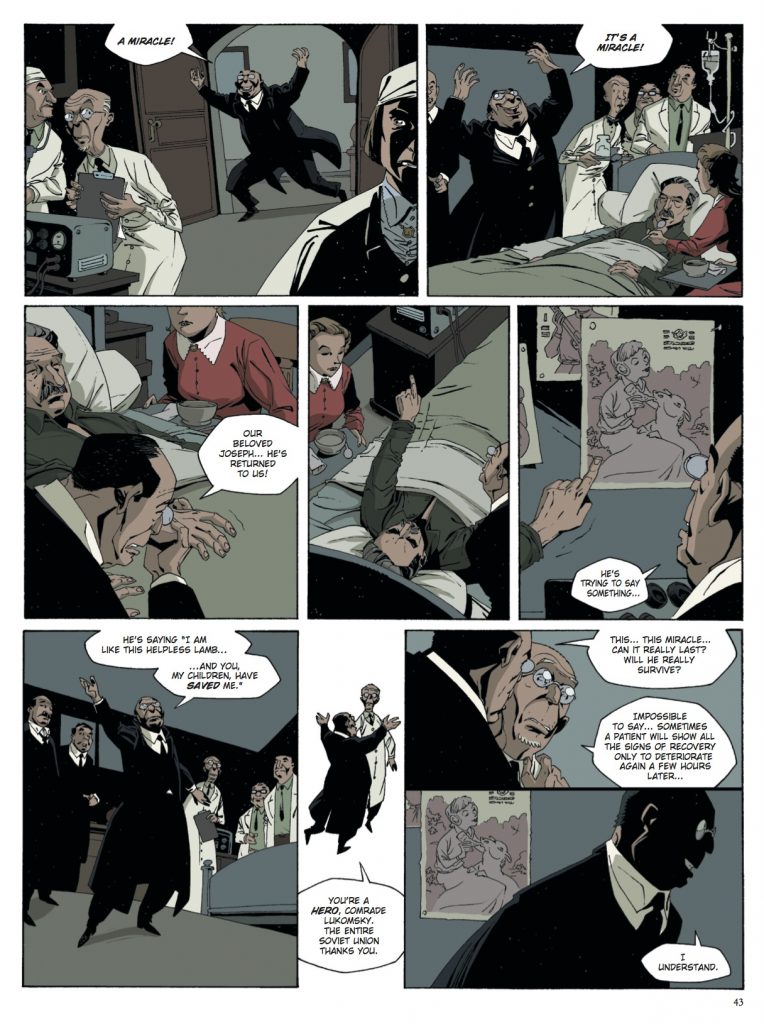 The Death of Stalin. Script by Fabien Nury, art by Thierry Robin.

Central to these schemes and scenes was Lavrentiy Beria, Stalin’s long-time executioner, and head of the NKVD, state security, and the secret police. Beria was the first to be informed of Stalin’s stroke, and later claimed to have “done him in,” although whether he was referring to his decision to delay treatment or to something more direct is unknown. Bury and Robin make Beria the center of their story as he attempts to manipulate events and people in order to seize control. Stalin himself plays little direct part in the story, but his presence looms over everything that occurs throughout the book. Nury and Robin perfectly reveal the very real terror that was life under Stalin from the opening panels, when Stalin calls the studio of Radio Moscow to congratulate them on a performance of Mozart’s Piano Concerto No. 23, and to tell them that he will be sending someone around to pick up a recording of the performance the next day. Unfortunately, the performance was a live event, and had not been recorded. No matter, however, as the orchestra simply stayed and recreated their performance that same night to record it for Stalin. Because failure to provide him with what he wanted meant the gulag at best and death at worse – for everyone involved. The fear is palpable, and the reader can almost smell it coming off of Robin’s figures.

What follows is a tour of a world gone mad, but one which operates by its own set of blood-soaked rules, and Nury and Robin take the reader through it effortlessly, evoking disgust, horror, laughter, and wonder in turn, and sometimes all at once. The creators also to an incredible job of separating average citizens and soldiers from the seven ministers at the heart of the system: the widow who wants to take her son to see and honor Stalin’s body as it lays in state, because his father died at Stalingrad. The Red Army officer who finds himself at the center of a tragedy that he neither caused nor could really have avoided. Moreover, the utter indifference of the men in power to those they rule is brilliantly conveyed by Nury and Robin’s decision not to emphasize it. Instead they present it like it was, a fact of life. My favorite touches are two quintessentially Russian “jokes” (which I’ll let you discover yourself) that I suspect are historically accurate, but which in any case reflect the fatalistic, often bitter humor that has been a hallmark of that people since before the Mongols invaded. Robin’s art is breathtaking, using a variety of panel-layouts, framing, and viewpoints that keeps the reader glued to the page and moving effortlessly through the story, while from page one, panel one, Nury lives in a brilliant balance of words and wordlessness that is the thing that comic writers dream of. 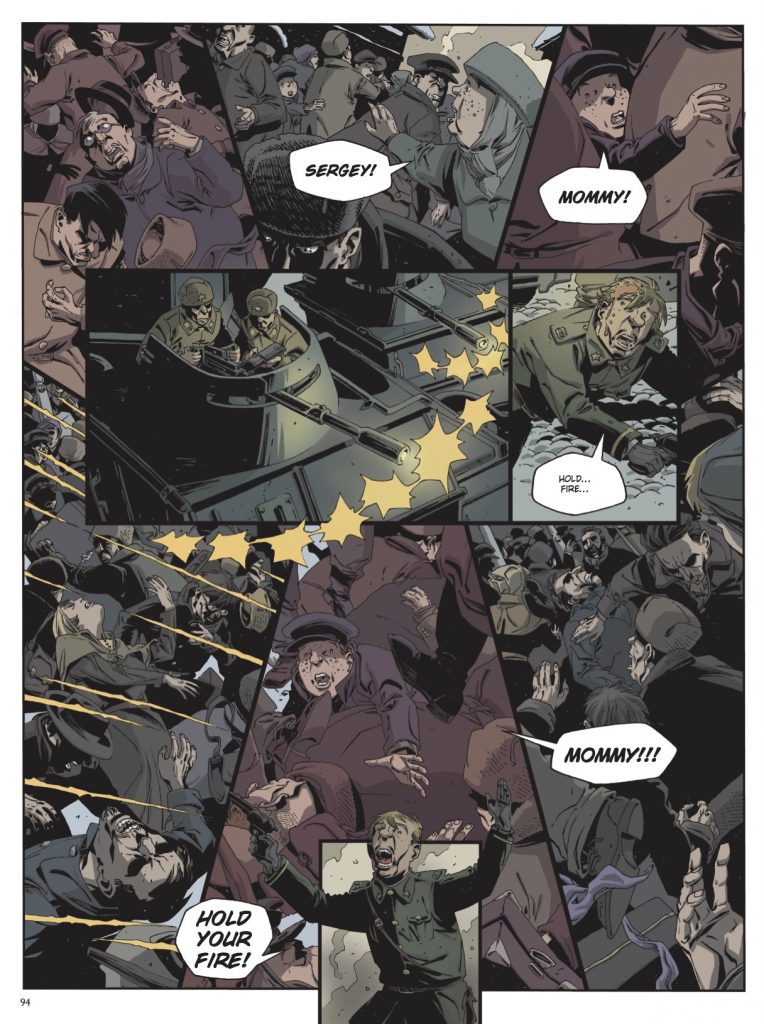 In all, The Death of Stalin is a brilliant, darkly funny portrait of the machinations of the powerful, and a deeply moving study of the people who are both the victims of – and victors over – their rulers. The heart of this incredible story is ultimately in the background, in the characters who have been forgotten by history, or who spring from the pens of Nury and Robin. This is an astonishing feat of storytelling in any medium, and a vanishingly rare one in comics. The Death of Stalin is a work of beauty in the Russian mold, where “the awful thing is that beauty is mysterious as well as terrible. God and the devil are fighting there and the battlefield is the heart of man.” In short, this book has soul.

The Death of Stalin is currently available at comic shops, and will be released on Amazon and other booksellers on July 25.