Sam Glanzman brought a passion and style to his art that is instantly recognizable, and which quite literally helped to define an entire genre. He will be very sorely missed.

Sam Glanzman, grand-master of the war comics genre and of the comics medium itself, died on July 12 this year, aged 92. Mr. Glanzman worked in the comics industry for almost 80 years, beginning in 1939 at the age of 15. When he turned 18 in December of 1942, however, Mr. Glanzman traded in his artist’s brushes for sailor’s denims, and enlisted in the Navy. After boot camp, Sam joined the crew of DD479, the Fletcher-class destroyer USS Stevens, on which he would serve until the war ended in late 1945. Along the way the Stevens would participate in in 16 different naval operations in the Pacific Theater, destroying 14 Japanese planes, including some engaged in kamikaze attacks against the ship, and the ship was awarded three commendations. In short, the Stevens was an American destroyer in World War II, one of the famous “Tin Cans,” small, fast, fragile, and capable of taking on a variety of missions and operations, some of which had never been envisioned by her designers. 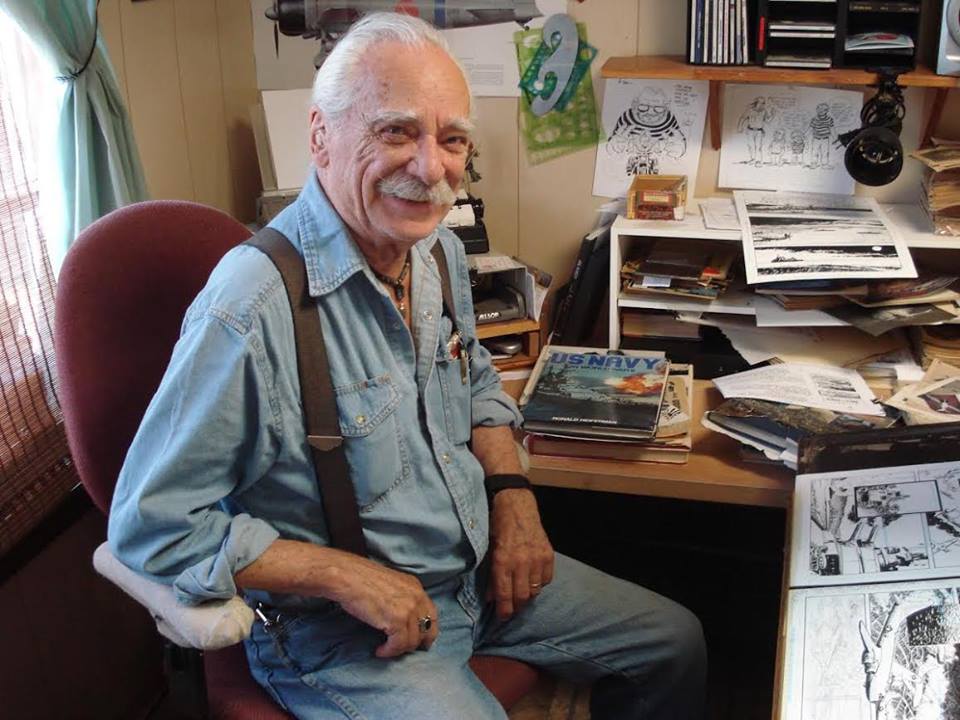 Against regulations, Mr. Glanzman kept a journal of his time aboard the Stevens, complete with sketches and finished artwork illustrating the ship, her crew, and the events and sights he saw during his tour of duty. After the war, he became a professional illustrator, eventually taking a job drawing comics for Charlton Comics in 1958. There he became known for his work on Carleton’s historical war comics, producing detailed, accurate illustrations and stories. By the mid-1960s, Mr. Glanzman was regularly freelancing for Charlton and Dell working largely on war comics like Dell’s Combat, but also branching out to do fantasy work on titles like Tarzan, and co-created (with Joe Gill), Adventures of the Man-God Hercules, in which, freed from the need for historical accuracy, he was able to stretch his artistic muscles, creating a comic that was highly stylized and experimental for the time. In war comics, working with Will Franz, Mr. Glanzman co-created the legendary “The Lonely War of Willie Shultz” for Charlton’s Fightin’ Army. 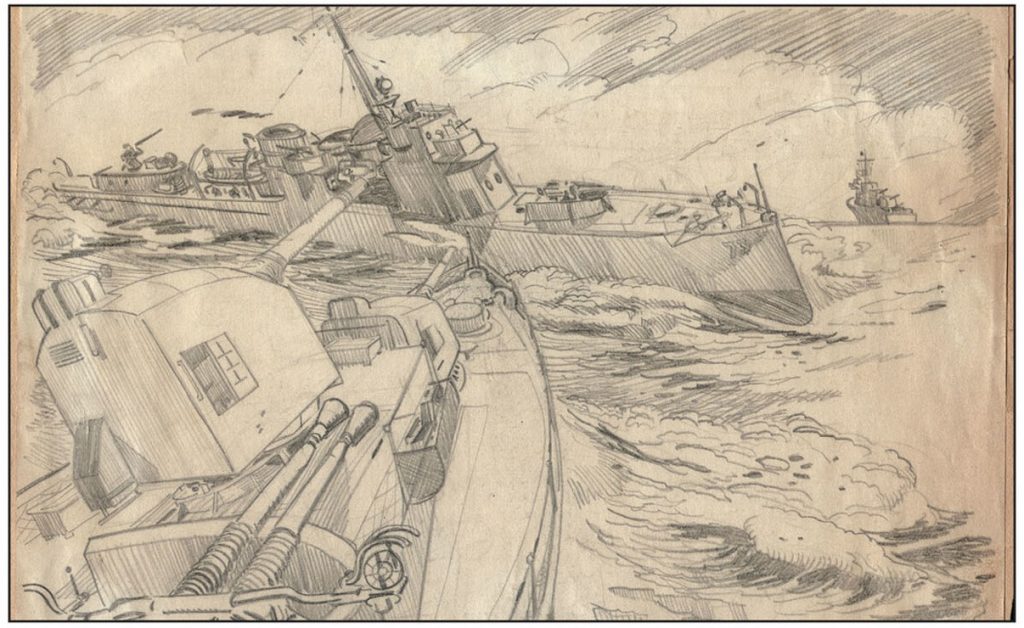 All this time, his wartime journals and experiences on the Stevens lay largely untouched save as reference material when drawing other stories (fictional and non) set in the war. Until, that is, late 1969 when Mr. Glanzman joined DC’s stable of regular freelancers under the editorial auspices of Joe Kubert. The first USS Stevens story, “Frightened Boys… Or Fighting Men” appeared in Our Army at War 218, cover dated April 1970. A four-page tale, “Frightened Boys…” was still something different, something special. A simple story of a group of newly assigned sailors undergoing their baptism of fire aboard the Stevens during a kamikaze attack, in four pages, Mr. Glanzman caught the terror, the courage, and the desperation of these terribly young men at war, with the story flowing from panel to panel with a grace and easy fluidity that would become a hallmark of his work. Despite becoming the primary illustrator for DC’s G.I. Combat’s “Haunted Tank” stories, it would be these small back-page stories that would cement Mr. Glanzman’s place as one of comics’ greats. He would go on to write Stevens stories for DC through 1977, and would return to the ship and her crew again and again in the 1980s for Marvel’s Savage Tales. In 2013, Mr. Kubert would ask Mr. Glanzman to revive the Stevens for what would be Mr. Kubert’s last work, Joe Kubert Presents, insisting that Mr. Glanzman was one of the finest artists he had ever known. 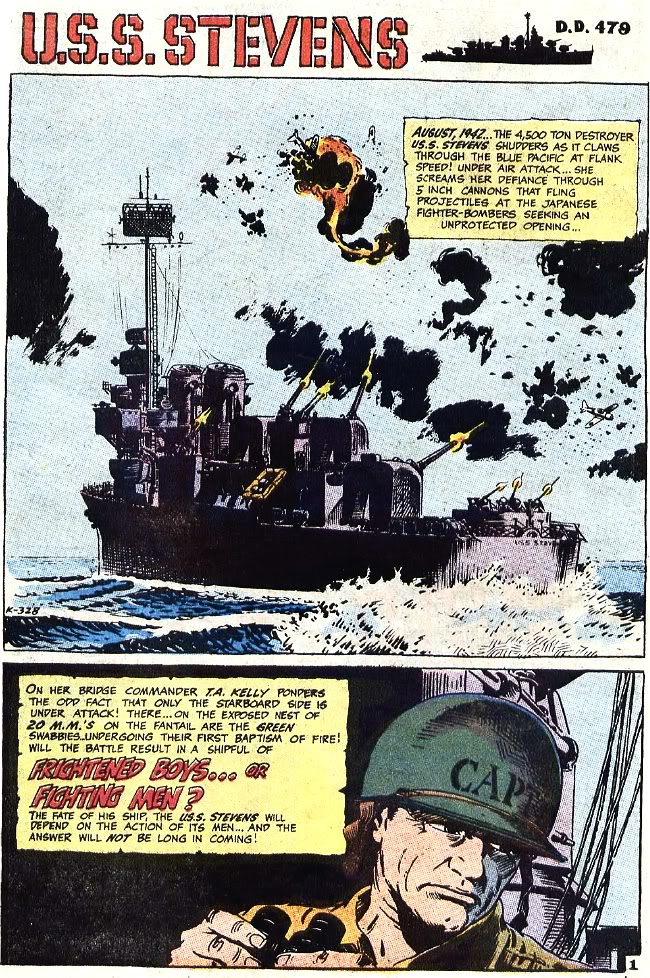 Opening page of the first USS Stevens story for DC comics, in Our Army at War 218 (1970). Story and art by Sam Glanzman.

In recent years, Eisner-nominated editor Drew Ford has brought Mr. Glanzman’s work back into publication, beginning with A Sailor’s Story  and The USS Stevens: The Collected Stories from Dover Press, and following up with Red Range and the forthcoming Voyage to the Deep from Mr. Ford’s own It’s Alive Press. In the wake of Mr. Glanzman’s final illness, Mr. Ford has created a Go Fund Me campaign to help Mr. Glanzman’s widow, and to celebrate his long career by publishing Sam Glanzman Forever, a tribute to the artist which will include unpublished letters, art, photographs, and tributes from Mr. Glanzman’s fellow professionals and fans alike. At the time of writing the campaign has raised a little over $16,000 of its $20,000 goal, but donations are still being accepted, and gifts of $175 and up receive original artwork by Mr. Glanzman or pieces donated by other artists, including work by Jok and Al Milgrom. Previous volumes from It’s Alive have been incredibly high quality, and there is no reason to believe that Sam Glanzman Forever will be any different. If you can, donate. You’ll not only be helping out the family of one of comics’ greats, but you’ll also have the opportunity to own a collector’s item that is guaranteed to be something special.

In a medium where art and story all too often feel like interchangeable, pre-packaged, industrial productions, Sam Glanzman brought a passion and style to his art that is instantly recognizable, and which quite literally helped to define an entire genre. He will be very sorely missed.