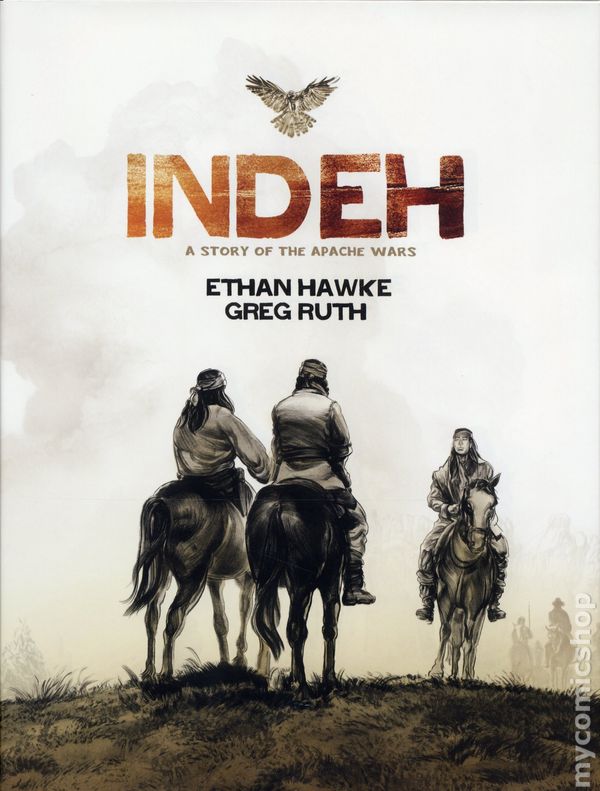 Indeh: A Story of the Apache Wars. Art by Greg Ruth

Previews Magazine is pretty much a permanent part of my pull list. There are a few reasons for this, not least of which is the sheer Sears catalogue-esque pleasure to be gained from leisurely going through it every month. However, as FreakSugar.com’s war comics correspondent, Previews is also a kind of necessity. War comics today tend to come from independent publishers, and usually not ones like Image, Vertigo, and Dark Horse. No, I’m talking the publishers lumped together alphabetically every months in the green-edged section under “Comics and Graphic Novels,” where you find folks like Avatar Press, Aftershock Comics, Titan Comics, etc. My monthly ritual of going through Previews page by page generally lets me keep up with the genre, no matter where it’s hiding, and fairly regularly brings me some incredible surprises.

Such was the case with Grand Central Publishing’s Indeh: A Story of the Apache Wars by Ethan Hawke (yes, that Ethan Hawke) and Greg Ruth (The Lost Boy) – just a little blurb in the middle of Previews a few months back. I pre-ordered the book, and it made its way to my greedy paws last week. In a series of vignettes, Indeh covers a little-known period of history from 1851 to roughly 1874, corresponding with a series of conflicts fought between various Apache nations and Mexico and/or the United States. This is not your usual “how the west was won” narrative, however, as Hawke and Ruth come at the tale from the viewpoint of the Apaches.

Linking the stories in Indeh is Cochise (K’uu-ch’ish) of the Chichicahui group of the Chokonen band of the Chiricahua Apache, although the focus is on his son Naiches and the warrior Goyahkla, better known as Geronimo. There is a fair amount of fictionalizing here, as Geronimo was of the Bedonkohe band rather than the Chokonen, though he did join with them in later life to carry out various raids and campaigns. As with movies, you shouldn’t get your history from comic books, and Indeh collapses timelines and simplifies events to maintain a coherent narrative, but it does so very well indeed. 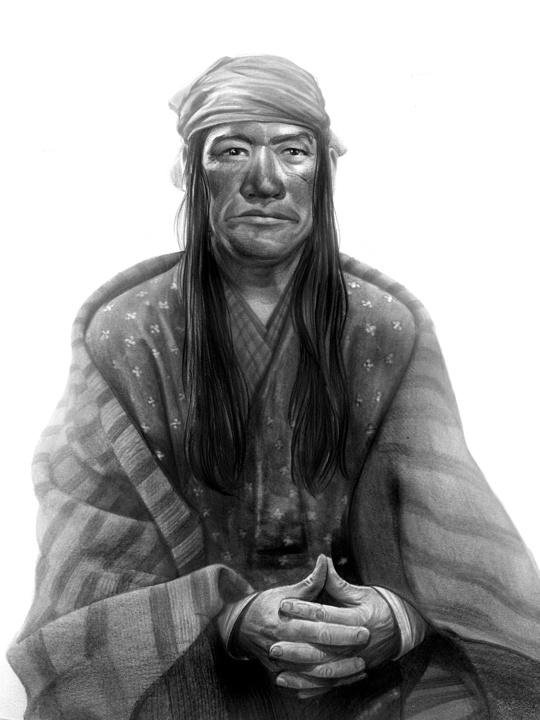 Portrait of Cochise by Greg Ruth.

In taking the Apache perspective, Hawke allows the events that loom largest to his protagonists to dominate. Thus the massacre of Geronimo’s family at Kas-Ki-Yeh and the resulting raids against Mexican soldiers and civilians make for a brutal opening. The famous (among the Apache) incident of Cochise cutting his way out of a US Army tent to avoid a treacherous capture (while barely spilling a drop of his coffee) is also front and center. Yet Hawke doesn’t fall into the trap of romanticizing his subjects. The Indian Wars are often glossed over in American history courses because of the sheer savagery with which all sides fought them, and age, sex, and military status had no bearing on who lived and who died.

Hawke first developed Indeh as a screenplay, and the resulting graphic novel retains something of the flavor of a fully illustrated storyboard, but it holds together nicely, and Hawke’s history is largely accurate. The dialogue is individualistic and idiosyncratic, yet presents no problems for the reader, and all together Indeh is a well written story. The only major historical complaints I have with the book are the expanded role given to US General Oliver O. Howard, and the portrayal of General George Crook as very much a “the only good Indian is a dead Indian” type, when in reality he was largely sympathetic to the Indians, even as he campaigned against them, and became an outspoken critic of US Indian policy in his later years. 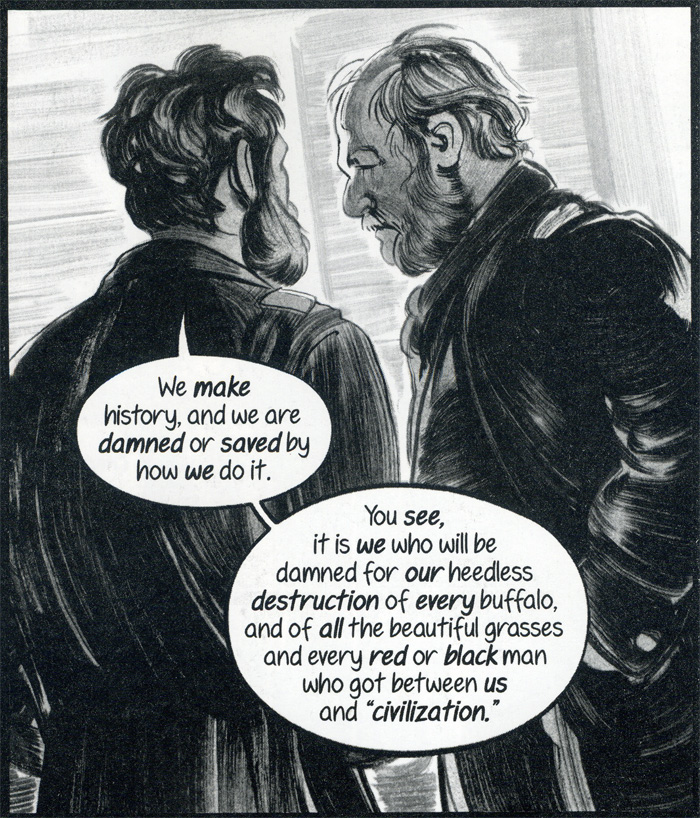 Greg Ruth’s pen and brush work throughout Indeh is simply glorious, with a sense of movement and emotional detail that is rare in most comics. Ruth’s backgrounds are generally minimalist, and he achieves focus within each panel through a brilliant use of shading, with darker figures drawing the reader’s attention even as the panel is dominated by the unmistakable geography of the southwest in the background. Ruth slides easily from emphasizing the smallness of men in this vast, ancient land to the close intimacy of conversation in a trading post or the fury in a man’s eye. 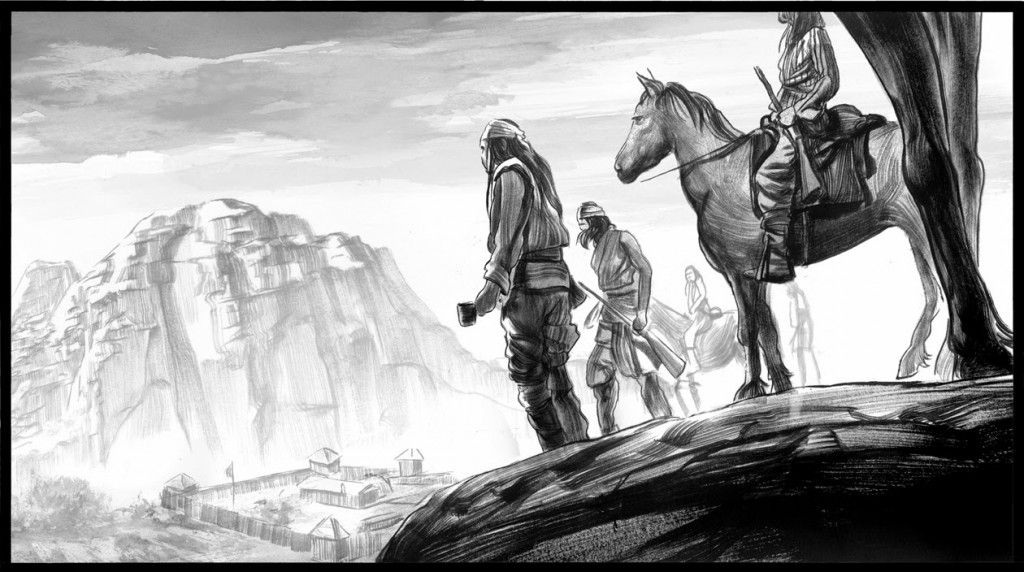 Indeh is touching and troubling and powerful and heartbreaking, and is simply a must have for anyone interested in war comics, or Apache history, and serves well as a starting point for further exploration of this overlooked part of our history, a quest greatly aided by the bibliography Hawke includes in the back matter. With a cover price of only $25.00 for a hardcover edition (currently $15.00 on Amazon), it’s also incredibly well priced. Pick this one up – you’ll be glad you did.