Thirty years after its first appearance in Europe, Joe Haldeman and Marvano’s The Forever War – a graphic adaptation of Haldeman’s Hugo, Nebula, and Locus Award-winning novel of the same title – is being reissued as a limited series by Titan Comics, first as single issues with the inevitable trade collections to follow. As a story that remains as timely, trenchant, and powerful as when it was first published in 1974, The Forever War tells the story of William Mandela, a brilliant young man who finds himself swept up in a conflict that seems unending, where life has little or no value, and where he must return to the eternal human truths to find his own meaning and retain his sanity.

I had an opportunity to speak with Mr. Haldeman and Mr. Marvano recently about the history of the original graphic novels, their thoughts on The Forever War’s enduring relevance and their plans for other projects in the near future. 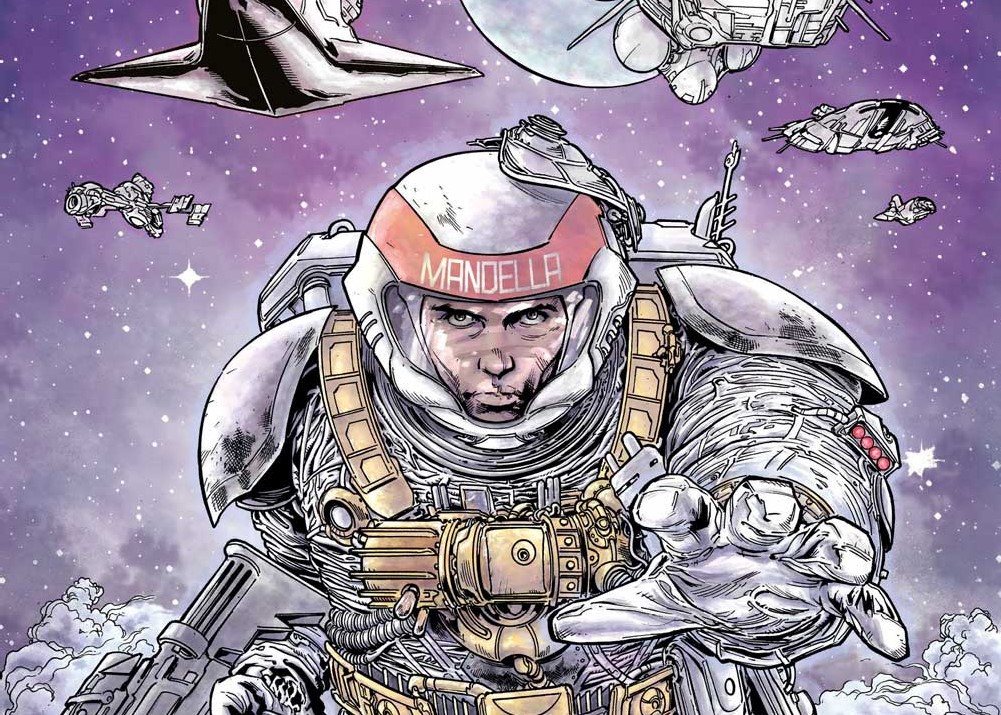 Freaksugar: What would you like readers who are not familiar with The Forever War to know about the story?

Marvano: Well, they don’t need to know too much in advance. It’s more fun to explore and to discover than to have prior knowledge confirmed. Or not confirmed.

FS: Titan’s The Forever War series is reprinting the graphic adaptations of Mr. Haldeman’s novel from the late 1980s, when it was originally published in Dutch (De Eeuwige Oorlog) and French (La Guerre Éternelle).  How did this collaboration first come about, and how did a professional association become a friendship as you worked on the project together?

M: As I remember it, I made a couple of pages, went to some SF Con where Joe was guest of honour, showed him the stuff I’d made and asked for his permission to adapt the novel to graphic novel. A couple of days after the Con, I got a written permission from Joe’s agent to present the project to publishers. See how simple life can be… The friendship just developed. It must be that we’re both extremely likeable guys.

Joe Haldeman: Mark found me at a World SF Convention meeting and asked whether he could do a translation of The Forever War into graphic novel format.  I loved the idea, and we started doing the adaptation.  This was before the internet, so we worked slowly by fax.  Mark came down to Florida a couple of times, and we got together whenever I was in Europe.

FS: In creating the graphic adaptation, you chose to make some dramatic changes from the source novel. I’m thinking particularly of the “Teddy Bears” of Aleph Aurigae and the “Taurans” themselves, both of which differ considerably from their descriptions in the novel. What was behind this reimagining?

M: The Teddy Bears, I remember, just didn’t work graphically. They work in the novel but they looked a bit silly in image. So there was a practical reason why I didn’t use them. As for the Taurans, I don’t exactly remember what happened, but I do recall that I was looking for something that moved in an acceptable, “realistic” way. The big problem came later, when I did Forever Free. I had to re-invent them again, because this time there was a real interaction between the Taurans and the humans. So the Taurans needed expression, and at the same time remain kind of coherent with the previous image. That wasn’t easy. Moebius, the great Jean Giraud, liked the Taurans from Forever Free a lot.

JH:  As one normally does, I suppose we were striving to translate the descriptive prose literally into pictures with connecting narrative.  This of course required some restructuring of the story, which was not chronologically linear in the first place.  Even a simple flashback can cause headaches.  Shifting point of view also complicates things. I didn’t keep detailed notes on how I changed the text for the Teddy Bears and the Taurans.  I’ll let somebody else get an easy MFA figuring it out.

FS: After The Forever War you worked together again on Dallas Barr (adapted from the novel Buying Time) and an adaptation of some stories set in the Forever War universe called Libre à Jamais (Forever Free). With The Forever War coming back into print, are there any plans to reissue these books as well?

JH: My wife [Gay Haldeman, who also did the back-translation for the reissue of The Forever War – Ed.] is working with me on back-translating Libre à Jamais.

M: [Titan is planning to publish] Forever Free in English for the first time. I’m not aware of any plans concerning Dallas Barr.

FS: How does it feel to see something you worked on almost 30 years ago coming back into print, and in the US coming into print for the first time as individual issues rather than as graphic novels?

M: I like the “formula” that Titan is using now. The graphic novels probably should have been published in this form 30-odd years ago, when they were new.

JH: It feels like a strange literary kind of time-travel.  And parallel universes.

FS: The Forever War is perhaps more timely than ever, particularly as the current war in Afghanistan has now surpassed the Vietnam War as the longest in US history. How do you think the book and the comic adaptation speak to our past, present, and future?

M: To me, The Forever War is a timeless story. It would have worked wonderfully well in the 19th century and it will still function in the 22nd century. Political correctness will not be able to ban out war, I’m afraid. So The Forever War will remain relevant.

JH: The kind of science fiction that I write is usually a refraction of current events and the recent past.  This was true in 1968, and still is.

FS: Finally, do you have any closing thoughts about The Forever War you’d like to share with us?

JH: I hope the real world proceeds more calmly than I predicted in the trilogy.  If I’d known the gods were watching, I wouldn’t have predicted Donald Trump.