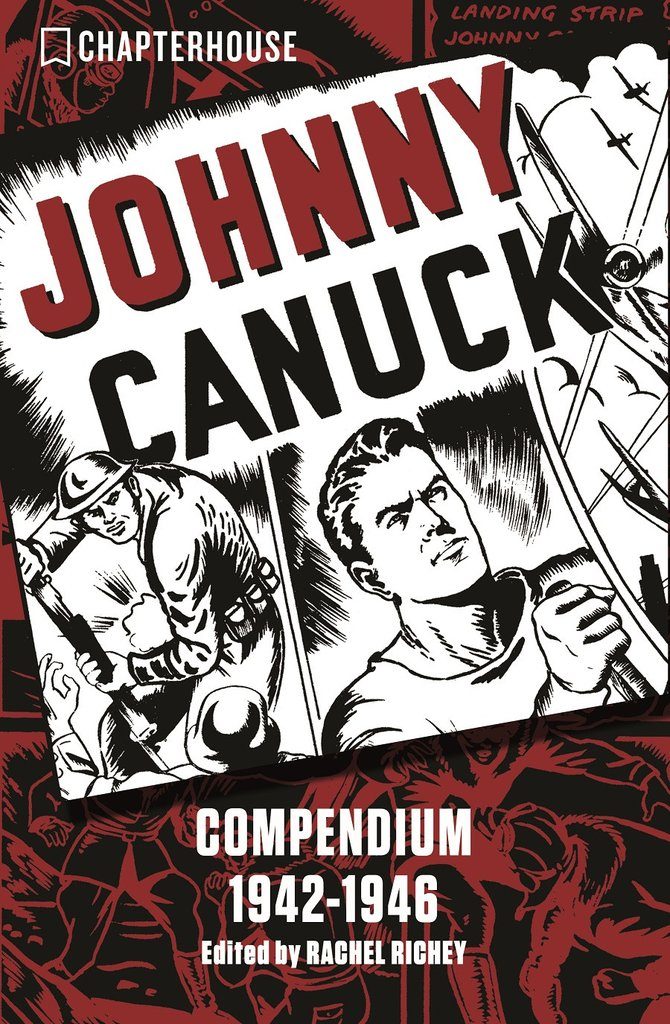 Undoubtedly, one of the most famous images in comic book history is the cover for Captain America Comics #1 where Cap marks his premiere by delivering a devastating right hook to Adolf Hitler’s jaw while deflecting and dodging the hail of gunfire from der Fuhrer’s guards. The red, white, and blue-garbed Steve Rogers wasn’t the only North American comic hero to do some Hitler-punching, however, being followed in 1942 by Canada’s own Johnny Canuck. Canada’s Golden Age of comics was born out of World War II. As part of the British Commonwealth, Canada had been at war since September of 1939, and by the end of 1940, Canadian soldiers, sailors, and airmen had already mobilized and been sent into combat against German forces, including during the Battle of France and the ongoing Battle of Britain.

Perhaps even more importantly, however, Canada had rapidly become the storehouse and arsenal of the Commonwealth, shipping thousands of tons of food, equipment, weapons, and aircraft to Britain. As the supply of engines and equipment from England for building British-designed aircraft and equipment was suspended in May of 1940, Canada had to purchase such supplies from the US, leading to a growing trade imbalance between the two countries. This in turn led to the War Exchange Conservation Act (WECA) of December, 1940, which banned the importation to Canada of “non-essential” material and products from the USA. This included American comic books, and created a vacuum that Canadian publishers rushed to fill. With the war effort having first call on colored ink supplies and presses, Canadian comics publishers defaulted to books with colored covers, but black-and-white interiors, earning the books the nickname of “whites.”

As in American comics, Canadian comics characters spent a great deal of time fighting the Nazis and the Japanese both at home and abroad, and in 1942, 17-year-old Leo Bachle created the most famous, and most beloved wartime Canadian hero, Johnny Canuck. Bachle’s feature ran in Bell Publishing’s Dime Comics from 1942 – 1946 (although Bachle had left Bell for the more lucrative waters of New York comic publishing before the WECA was lifted in 1946.) Collected and Kickstarted in 2015 by Rachel Richey, and published by Chapterhouse, Johnny Canuck: Compendium, 1942-1946 brings together all 28 Johnny Canuck stories in one hardback volume that provides an incredibly fun foray into the Golden Age of comics. 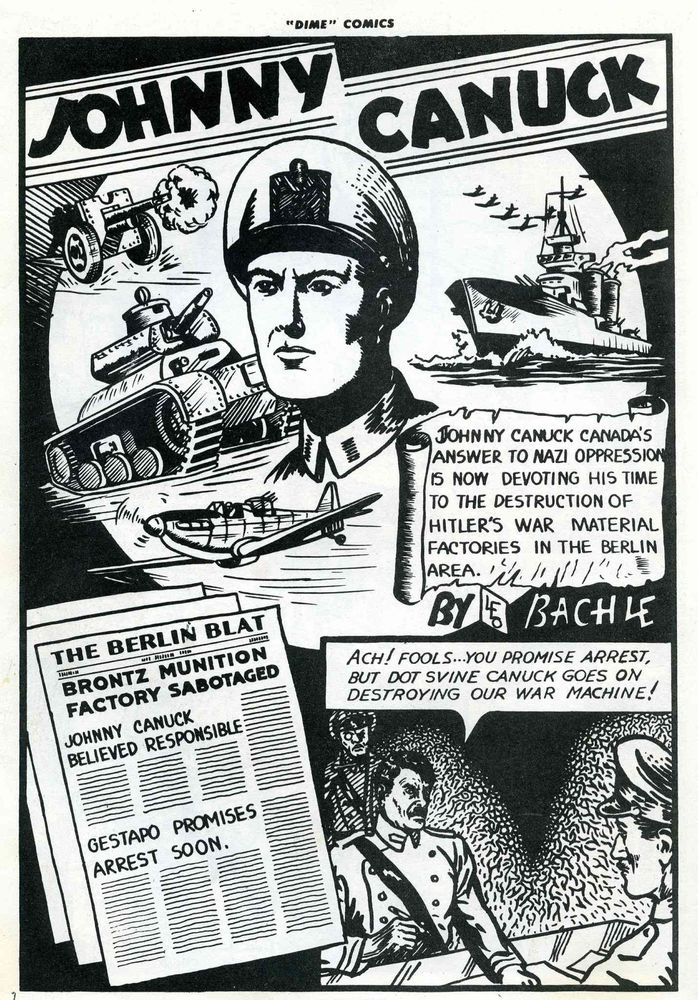 Johnny Canuck, “Canada’s Answer to Nazi Oppression,” spends a great deal of time shirtless and solving problems with his fists in adventures that roar by with the pacing of a missile. Each installment runs from 7 to 10 pages, so the action comes fast and thick. Johnny is brave, loyal, square-jawed and powerfully built, while the Nazis are drawn, manacled, scarred, and all speak in a dialect dripping with phrases like “Und I shall collect der ten thousand marks dot haf been offered by our illustrious leader!” Indeed, sentences in Johnny Canuck only end with question marks or exclamation point, with the latter far outnumbering the former as Johnny fights his way through North Africa, Soviet Russia, Yugoslavia, the Pacific, Germany, and France.

Subtlety is not what these comics are about. Good is good and bad is bad, and the tones are simple black and whites. The stories are simple, amply populated with slim, beautiful women who all (even the evil Nazi spy-girls) at have at least a little bit of a thing for our fearless (and shirtless) hero, and are written with classic cliff-hanger endings for every issue. In fact, the Johnny Canuck strips are more similar to old movie serials from the 1930s and early 1940s than anything else, with the same, breathless, breakneck pace. Artistically, Bachle takes his style from Alex Raymond and Milton Caniff, and one of the most interesting things about the Compendium is that the reader sees Bachle’s style and talent grow from merely very skilled into an artist working fully in his own style, and one who comes to use the black and white format of the Canadian Whites to his full advantage, reveling in deep blacks, chiaroscuro, and meticulous line work. Here the Johnny Canuck strips work as a kind of montage of the creator’s development, for Bachle was churning out dozens of different strips for Bell at the same time he was working on Johnny Canuck, accruing thousands of hours of experience and experimentation in just four short years. 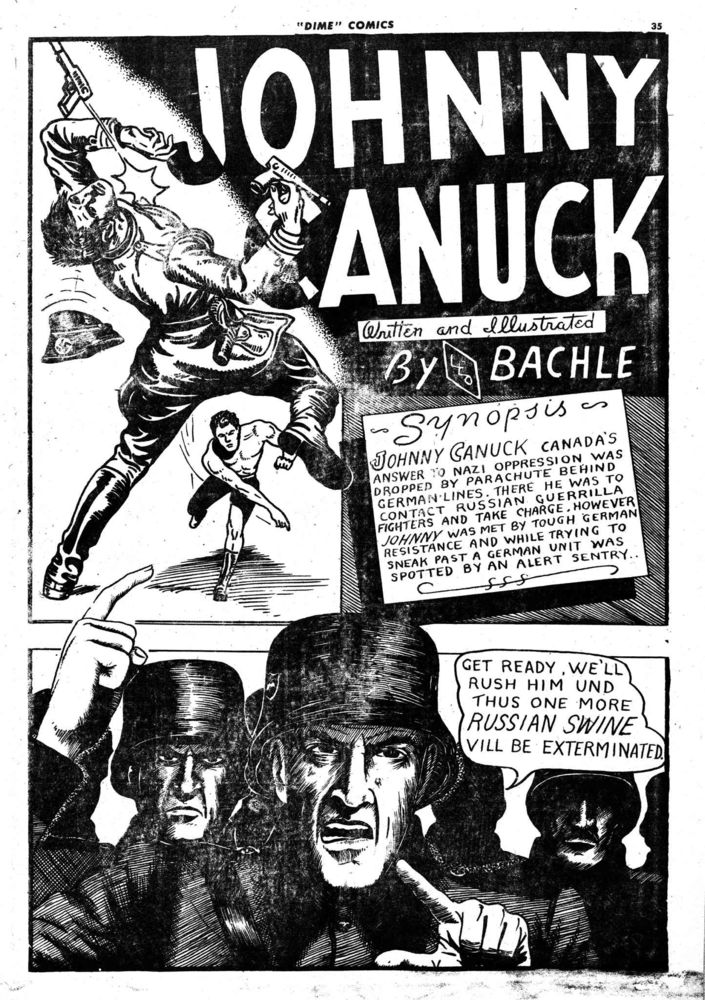 Like almost all comics of the era Johnny Canuck was produced at the writer/artist’s tops speed, and with minimal editorial oversight. Bell Publishing was far more concerned with getting the books in print and selling than with proper spelling, realism, or even necessarily more than passable art. Comic books, after all, were viewed as disposable entertainment for kids, who wouldn’t notice unconventional spelling or grammar. Nonetheless, Johnny Canuck became a Canadian sensation, beloved by not only kids, but adults, including Canadian servicemen overseas. Late in the war, Bachle was even detained on the Canadian side of the border when attempting to return to his new job in New York City because he had been deemed to be “vital to the war effort” because of Johnny. 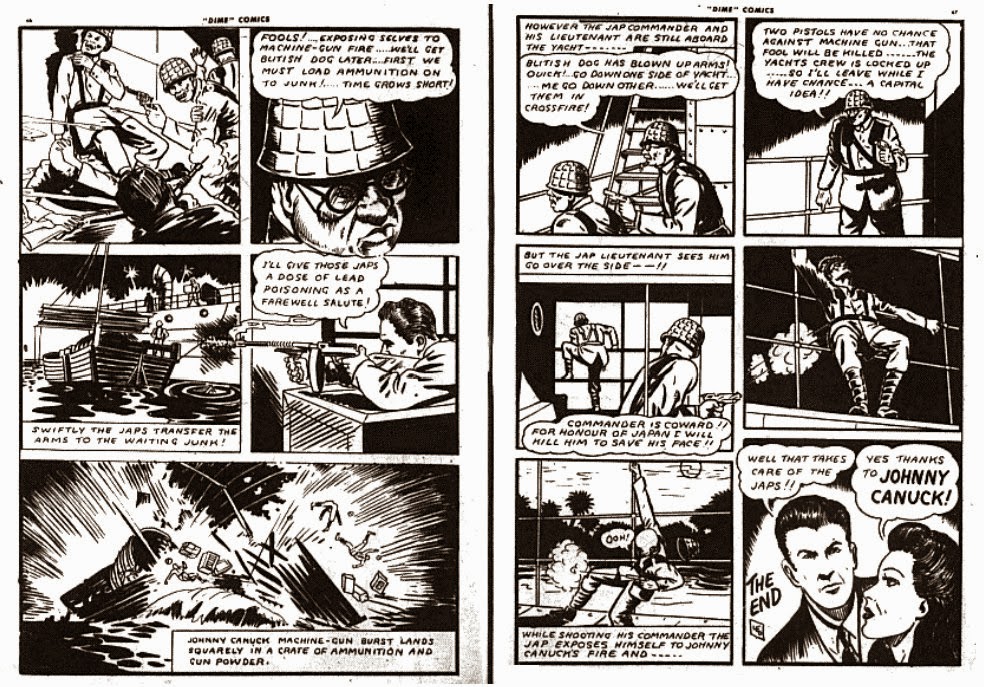 In all, the Axis-smashing adventures of Johnny Canuck are an incredibly joyous romp through the Golden Age, and a tremendously eye-opening look into the war-time psyche of a culture that we Americans tend to see as polite to a fault, and not at all the kind of folks who would go about socking anyone in the jaw. Shows what we know. So, pick up Johnny Canuck: Compendium, 1942-1946 from your local comic shop or direct from Chapterhouse, and kick back and enjoy a simpler time, when no one was questioning whether or not one should punch Nazis.