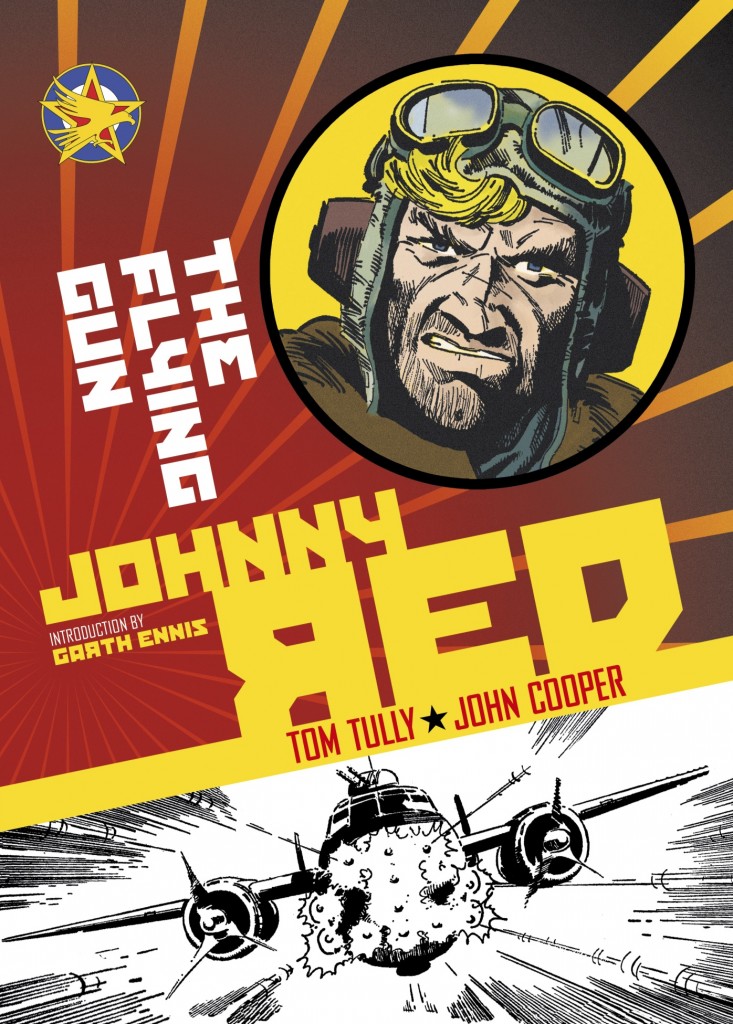 In 2004, Titan Books began collecting and reprinting British war comics of the late 1970s and early ‘80s from Battle Pictures Weekly comic magazine (the publication went through several title changes over the years, so I’ll be calling it Battle for short). These were some of the best war comics being written at the time, and the roll call of Battle writers and artists reads like a Who’s Who of British comics, including: John Wagner, Mike Western, Pat Mills, Joe Colquhoun, Tom Tully, John Cooper, Alan Hebden, and Cam Kennedy. Battle was a weekly, magazine-format anthology, so a feature series might get four pages in which to present a story’s latest installment, and the artists and writers developed an amazing ability to cram in as much as possible in the space they were given. The familiar panel and gutter arrangement of a comic page was largely abandoned in favor of irregular frames and border-breaking scenes that allowed the artists to fill the page to the maximum extent possible. The results were astonishing, and as the comics were produced outside of the influence of America’s comics code, and in a less heavily regulated format, the Battle comics have a harder edge by far than their contemporary American counterparts, in which creators were often faced with having to tell war stories without depicting bodies, or people actually being killed. 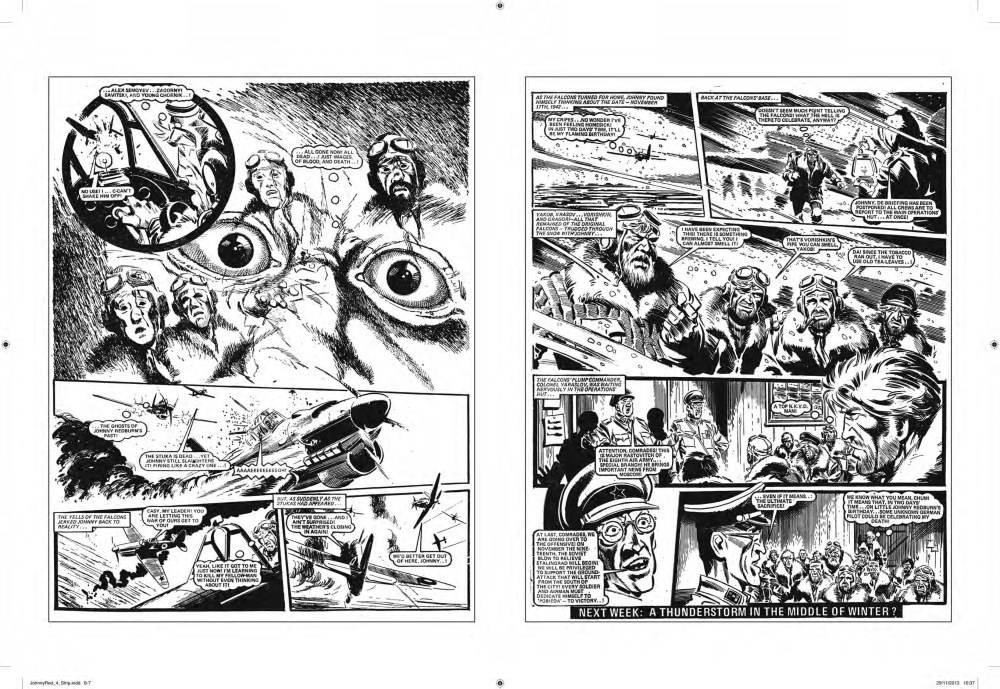 A good example of maximizing space and use of non-standard panels, a feature of almost all Battle strips. Pages from Johnny red, Vol. 4, art by John Cooper.

The latest installment in Titan’s Battle reprints is Johnny Red, Volume 4: The Flying Gun scripted by series creator Tom Tully and art by John Cooper. Volume 4 continues the story of Johnny “Red” Redburn, a disgraced RAF pilot who finds himself leading a Soviet fighter/bomber squadron on the Russian Front during World War II. This is the first volume to feature Cooper’s art as he replaced Joe Colquhoun in 1979 when the latter moved on to illustrate the legendary World War I comic Charley’s War. Both artists are simply superb, and the fact that Cooper manages an almost seamless transition as he replaces Colquhoun – who had become very closely associated with the strip in reader’s minds – is something of a minor miracle, and a testament to his talent. Cooper’s line is tighter than Colquhoun’s, and his style, while retaining expert detail is sparer. Cooper doesn’t have his predecessor’s seeming obsession with incredibly detailed backgrounds, often opting instead for a more minimalist approach. Even so, every rivet of Johnny Red’s famous Hurricane is in place and accurate, as is every weapon, uniform, and piece of equipment. Cooper also had an incredible feel for violent motion and aerial combat, though he is perhaps not quite the master of the drawn dogfight that Colquhoun was. 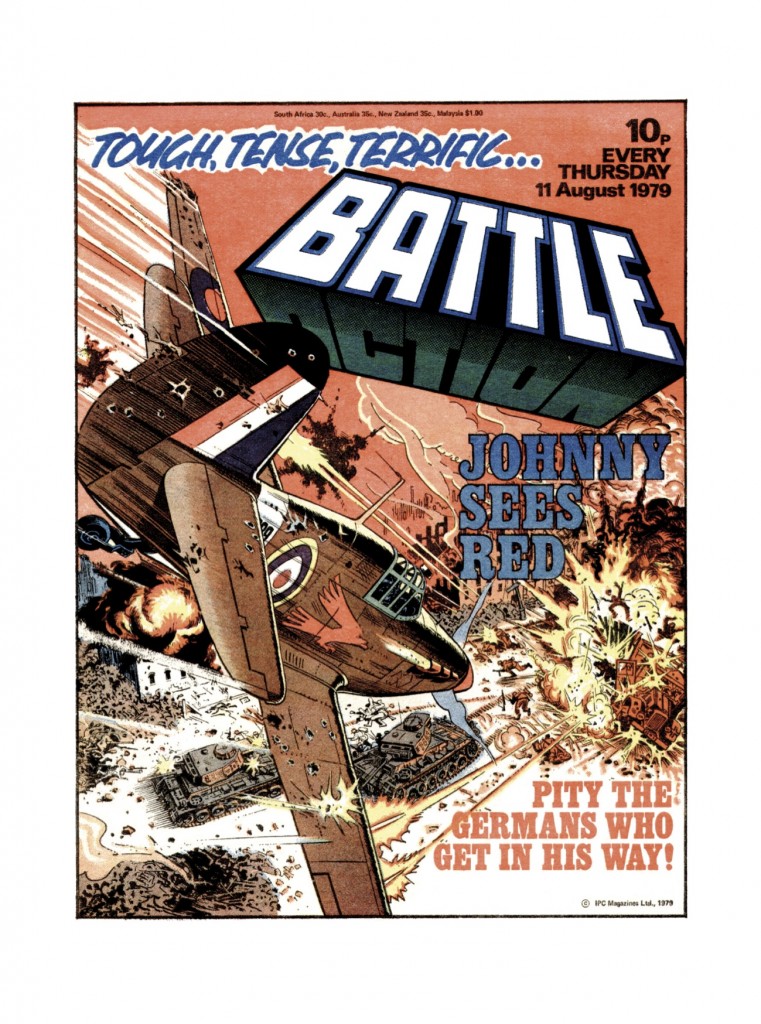 The transition is aided by Tully’s script, which takes Johnny out of his Hawker Hurricane and the skies over Stalingrad in order to transport a Soviet official to England across Nazi occupied territory.  A master of action and of the serial, Tully’s story keeps up a machine gun pace beautifully broken by occasional, heartbreaking beats that slow things down and let everything sink in. A sequence in which Johnny briefly returns home to Liverpool is one of the most masterful, rhythmically paced, emotional rollercoaster pieces of comic writing that I have ever had the pleasure to read. Tully hooks the reader early and makes it terribly hard to put this volume down. At the same time, however, Tully’s script takes Johnny and the Falcons a bit farther away from reality her than in previous collections (leaving aside for a moment the fact the  entire premise of the series is historically loony), including an encounter with a Me-109 modified with razor-tipped wings that slice through enemy planes. Still, Tully remains rooted in the horror of war, and continues to detail the toll that years of almost constant combat are taking on Johnny and his friends.

Johnny Red, Volume 4: The Flying Gun is a great addition to Titan’s Battle reprints, and leaves me impatient for the next installment. Currently available at comic dealers in hardcover for $24.99, the book will be released to the wider market in September, and as of this writing is available for pre-order on Amazon for $17.18. One thing to keep in mind is that the Titan Comics edition currently available is a library binding: a hardcover, but without a dust-jacket, the cover art being integral to the front and back boards. Based on the different cover art and ISBN numbers, the September release edition will likely be in Titan’s more familiar dust-jacketed hardcover format with the lovely red-cloth boards of the previous volumes in the series. In either case, all of Titan’s Battle books are must for any war comics fan, and these well-bound, high-quality editions are an absolute joy for new readers and old fans alike.