I’m adding The Lost Fleet: Corsair to my pull list, and if you dig military SF, I suggest you do the same. 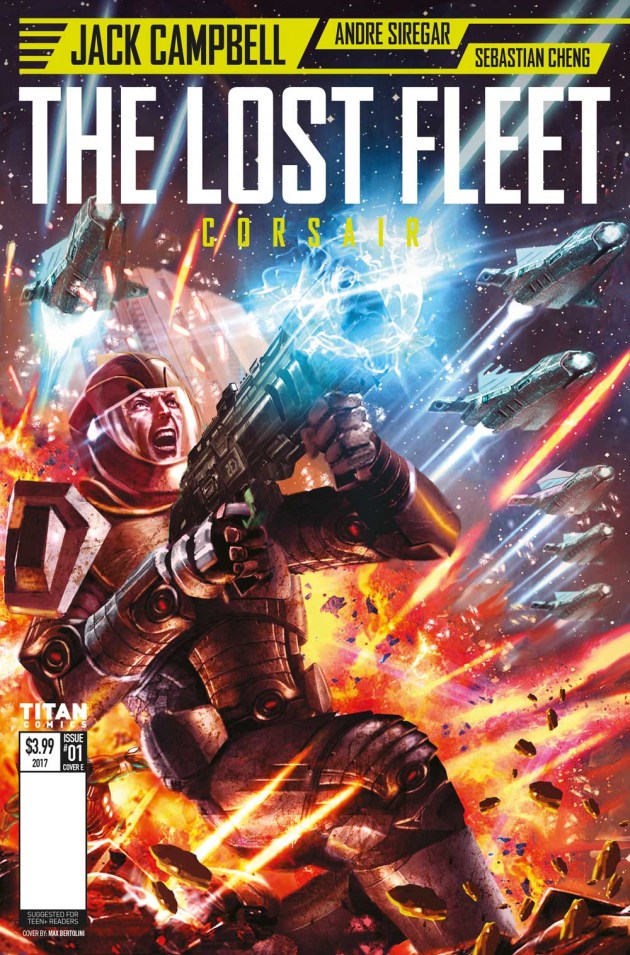 Jack Campbell and André Siregar’s The Lost Fleet: Corsair #1 from Titan Comics feels like ten pounds of story in a five pound sack. There is a lot going on in the first issue. To be fair, as part of Campbell’s Lost Fleet universe (which at the time of writing includes 16 novels), Corsair is bound to come in carrying some plot-baggage. Very briefly, Campbell’s series are set in a far future universe in which humanity colonized much of our local galactic space, and shook out into two major sociopolitical factions: the Alliance, a kind of multiplanetary federal republic, and the Syndicate Worlds (Syndics), an interstellar corporate state where “CEO” and “executive” are political and/or military titles.

Over a century before the first novel in the series, the Syndics launched a surprise attack against an Alliance convoy, and the resulting Alliance-Syndicate War had been raging ever since, stretching the political, military, economic, and social structures of both polities to the breaking point and beyond. At a pivotal moment in the war, Alliance Captain and legendary hero from the very first battle of the war John “Black Jack” Geary is discovered orbiting an out of the way star in a survival pod kept alive in suspended animation for the last 100 years. Called on to lead the Alliance Fleet out of a potentially fatal situation, Geary wins through, but the cost of the fleet’s escape is a suicidal rear-guard action by the battlecruiser Repulse, commanded by Black Jack’s grand-nephew Michael Geary.

Although never seen again in the prose series, Lost Fleet: Corsair reveals that Michael and some of his surviving crew were captured and imprisoned by the Syndics, where they have remained throughout the action of at least the first six books in the series, if not longer. Issue #1 picks up with the Syndicate Worlds falling into rebellion and disarray sometime after the events of The Lost Fleet: Victorious and The Lost Stars: Tarnished Knight. Pretty much everything above gets mentioned in one way or another in Corsair #1, so it’s worth touching on. At times this issue is overburdened with all of the continuity that is hanging out there in another medium, but it also feels like something that Campbell and Siregar are just pushing through in order to get it out of the way so they can focus on the story they want to tell here. I expect that subsequent issues will be more self-contained as the creative team is able to remove their characters and story from the existing plotlines. 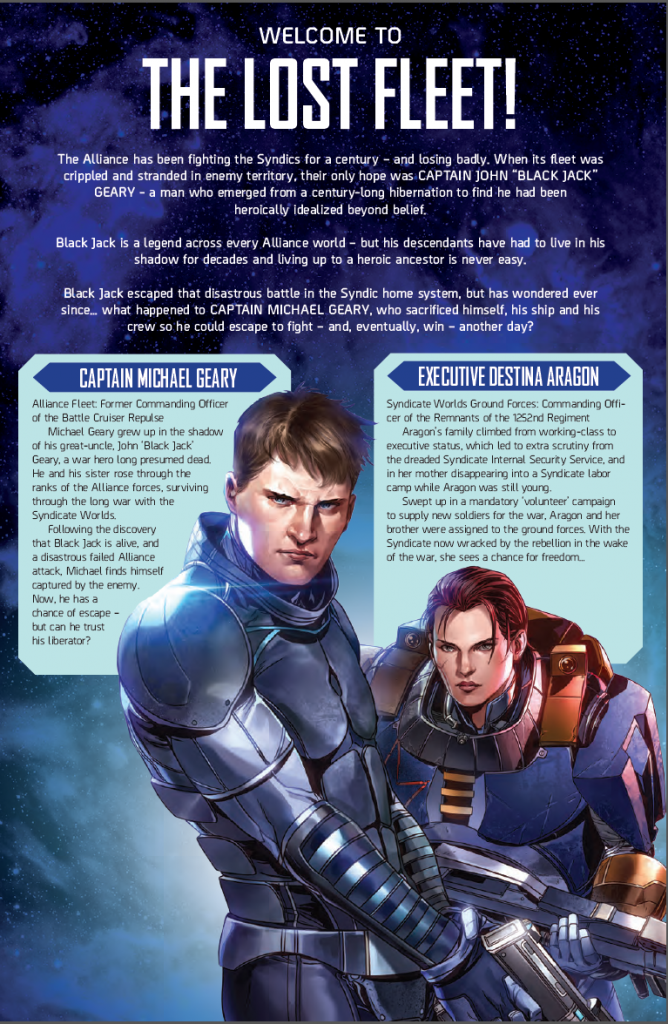 The Lost Fleet: Corsair gets the introductions out of the way right up front.

The series is set to revolve around Michael Geary and Syndicate Executive (Ground Forces) Destina Aragon who, with her unit helps Geary and the other Alliance prisoners escape so that they can steal a Syndicate warship and get back to their respective homes. There is a lot of distrust on both sides of a hundred-year war in which tactics devolved into massive frontal assaults and planetary bombardment was regularly used by both sides to wipe out civilians by the millions. Thus the first and probably the second issue of Corsair seem poised to set up a story of characters from both sides coming together through necessity and shared danger as they try to make their way back home. While similar in some respects to the plots of both The Lost Fleet and The Lost Stars series, Corsair marks the first time that the main protagonists come from opposite sides of the conflict, rather than different organizations or factions within the same state, and I’m looking forward to seeing if he can pull it off.

However, issue 1 is incredibly fast-paced and action heavy, concentrating on introducing the main players and getting the story rolling – character development and Aragon’s backstory will have to wait a bit. Campbell really hits the ground running, and while the sheer amount of information he needs to get across while also launching a new story sometimes causes the flow to stumble, the reader is nevertheless pulled into the breathless rush. Siregar’s pencils are sharp and realistic, a style reinforced by Bambang Irawan’s confident and precise inking. Unfortunately, Sebastian Cheng’s colors are a bit too slick, and sometimes dip characters into an overly smooth, video game-esque uncanny valley look, and despite the scars and scuffs provided by Siregar and Bambang, his colors are a bit too clean and bright for the setting. 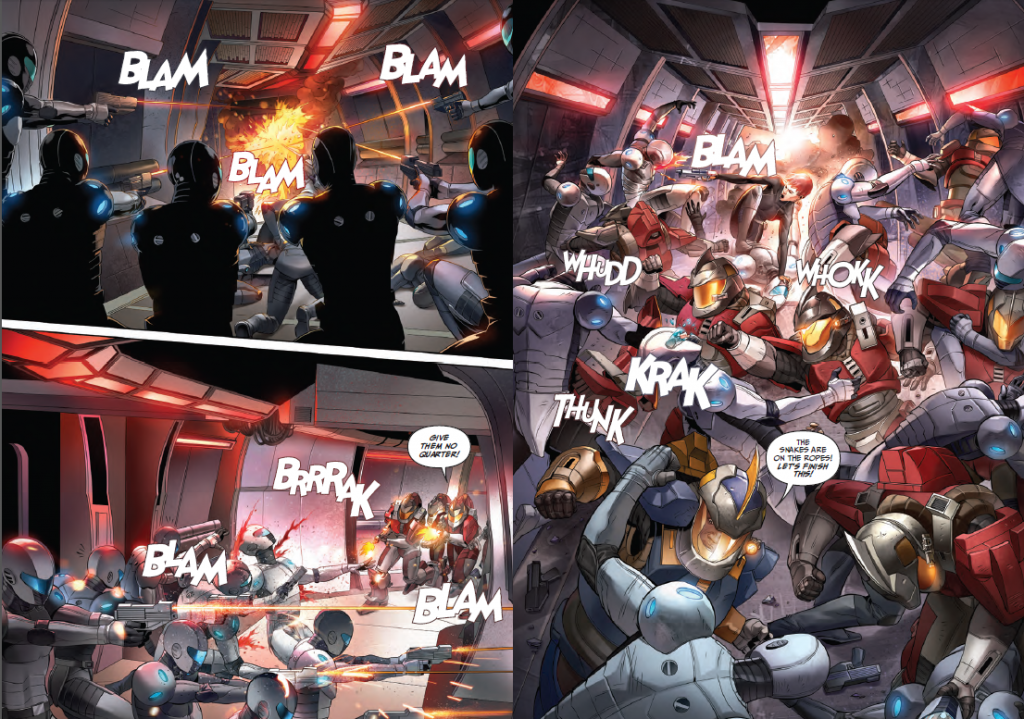 Overall though, The Lost Fleet: Corsair #1 is a mile-a-second ride that left me impressed and slightly dizzy with everything that the creators managed to fit into 25 pages. The series promises to expand the Lost Fleet universe in some new and interesting directions, and provide plenty of SF action along the way. It remains to be seen whether or not the carefully detailed battles that Campbell’s prose is known for will translate into sequential art, but I look forward to finding out, or even to watching him take a different tack completely. There’s a lot of potential here, and I want to see what happens next, so I’m adding The Lost Fleet: Corsair to my pull list, and if you dig military SF, I suggest you do the same.