Done right, graphic journalism and historiography can be an extraordinarily powerful means of getting to the truth about events, as it is in Joe Sacco’s Palestine, or Joe Kubert’s Fax from Sarajevo, or John Lewis’ March. Done poorly, it becomes Madaya Mom: a sanitized piece of fiction that says nothing about anything. 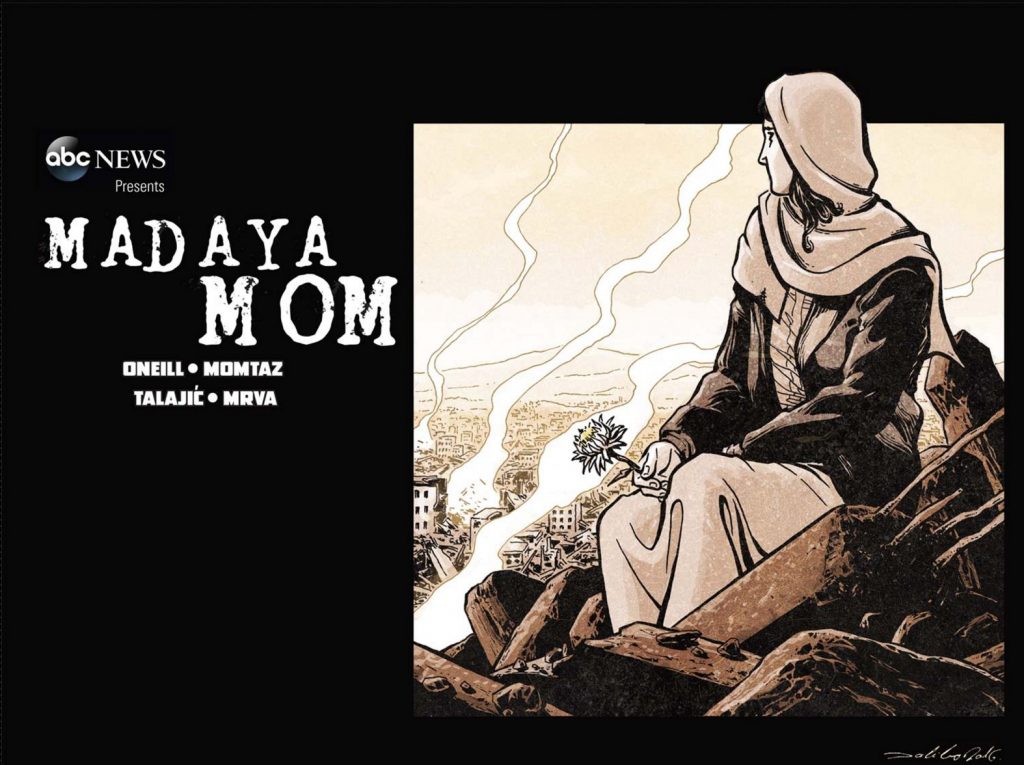 The earliest recorded siege took place at the city of Sharuhen in Gaza sometime around 1530 BC, in which the forces of Pharaoh Ahmose I supposedly besieged the town for three years before the defending Hyksos were defeated and the city razed to the ground. Over 3500 years later, siege warfare certainly hasn’t gotten any prettier. In fact, three and a half millennia of practice and technological advancement have only served to make it even more brutal. While the siege of eastern Aleppo in northwest Syria has been the focus of a tremendous amount of attention in recent days, it is far from the only, or the worst, of the sieges taking place in Syria (or Yemen) today.

The city of Madaya is about 180 miles southwest of Aleppo, and only about 47 miles northwest from the capital of Damascus. With a pre-war population of about 40,000, Madaya is about the same size of Coachella, CA when it’s not having a music festival, and has been under siege by Syrian forces loyal to President Bashar al-Assad along with allied Hezbollah militia from neighboring Lebanon since July of 2015. On 18 October of that year, the besiegers imposed a total blockade of Madaya, refusing to permit food or medical aid in, or anyone out, of the city. By December of 2015, the international humanitarian organization Médecins Sans Frontières reported that 23 people in Madaya had died of starvation. Aid was only allowed into the city on 11 January 2016, and even then the besiegers intercepted some food and vital medical supplies before they could be delivered into the city. Since then, aid deliveries have been sporadic at best, and 2016 saw them cut off completely again in May and part of November. In October 2016, the estimated number of people who had died due to malnutrition in Madaya was estimated at 65. This does not count those killed by disease, regular bombardments, snipers, and land mines planted on the outskirts of the city, where many have to go to try and find wood for fuel. It is also worth noting that this kind of siege warfare is not practiced by Syrian government forces alone. The various groups that US media lumps under the terms “rebels” or “anti-Assad militias,” many of which are radical Islamist terrorist groups, and some of which are being supported by the US and its allies (including Saudi Arabia, Qatar, and Turkey), are practicing the same tactics in regions where they hold sway. To be sure, however, Assad’s forces, particularly as aided by the Russian military, are stronger, more unified, and generally have complete local air-control, making them much better at both besieging their enemies, and relieving their besieged allies. 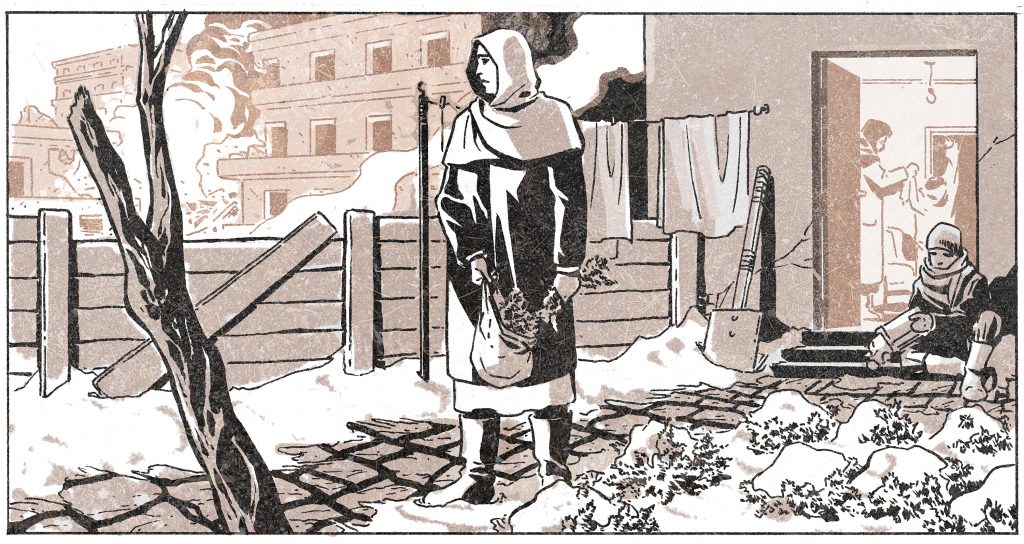 Along with medicine, food, vitamins, salt, and aid workers, the besieging forces have also excluded the press from Madaya and most other sites to which Assad’s forces control access. This has left international news agencies dependent on brief reports by local reporters and civilians usually transmitted by cell phones. In Madaya, one of ABC’s most reliable and most moving sources is a mother of five who has been given the nom de guerre of “Madaya Mom” in order to conceal her identity and help prevent reprisals against her and her family by the pro-Assad forces. In October of this year, ABC and Marvel Comics released a webcomic based upon the phone calls and texts of Madaya Mom to ABC reporters, and illustrated by Croatian comic book artist Dalibor Talajić. The resulting Madaya Mom comic purports to be graphic journalism, but is instead a blatant piece of propaganda that harks back to the war comic genre’s origins during World War II and Korea. 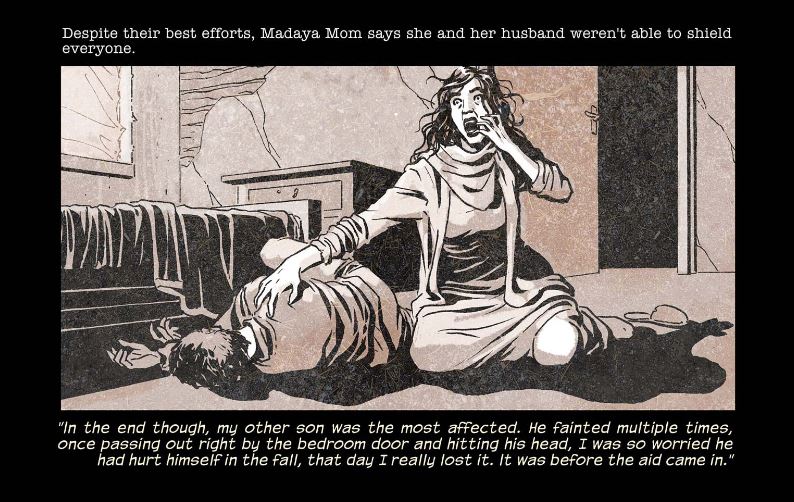 Look, there is no way that a reasonable person with half a brain can be anything but appalled at Assad’s regime and the manner in which it and its Lebanese, Iranian, and Russian allies have prosecuted the war. There actions have been brutal, inhumane, and have regularly violated international laws of war and the Geneva Conventions. They really are bad guys. Their opponents, however, aren’t exactly knights without fear and beyond reproach. In general, they want Assad out so that they can impose one form of theocratic government or another. The number of people fighting for a secular, pluralistic government is vanishingly small. The Syrian war is, in short, a multisided horror show. ABC/Marvel attempted to dodge all this mess by focusing on the personal story of Madaya Mom and her family as civilians trying to survive the hell on earth that their home town has become over the past two years, but it doesn’t work. Robbed of the larger context, Madaya Mom’s story becomes a weird kind of fantasy where the siege just happened for no apparent reason, and where an assault by the besieging troops somehow fails against a town in which Madaya Mom claims that there are no more “gunmen.” The very real suffering of Madaya Mom and her family is undercut by Talajić’s artwork, sepia-toned panels (except when Madaya Mom talks about the past, in which case the panels are tinted a bright cheery blue) that make the events they illustrate feel far away in both space and time, robbing them of any sense of immediacy or urgency. Worse, in a city whose inhabitants are literally starving to death, the members of Madaya Mom’s family look, at worst, a bit haggard and drawn. Indeed, a neighbor who violently lost a leg to a landmine while searching for firewood is represented by a neatly dressed man with a pinned-up pant leg and crutch, as if his injury was something long past and by now familiar, and certainly robbed of any real impact. Indeed, the comic goes to extraordinary lengths to avoid any graphic depiction of the war at all. The panels feature broadly rendered emotional distress, but the characters somehow always maintain both their dignity and basic good looks. 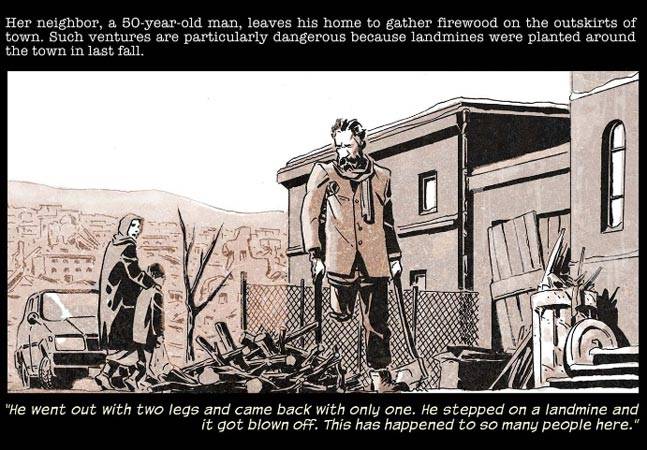 Indeed, the art is perhaps is Madaya Mom’s greatest failing, for the reader is all too aware that these realistically drawn characters are simply the artist’s conception Madaya Mom and her family, because they can’t show and don’t know what they actually look like, thereby reducing the entire exercise to a “dramatic reenactment.” The combination of suspiciously curated text and idealized art that at times borders on socialist realism robs Madaya Mom not only of the real emotional impact of the story, but also of any claim to be a piece of journalism or history. Done right, graphic journalism and historiography can be an extraordinarily powerful means of getting to the truth about events, as it is in Joe Sacco’s Palestine, or Joe Kubert’s Fax from Sarajevo, or John Lewis’ March. Done poorly, it becomes Madaya Mom: a sanitized piece of fiction that says nothing about anything.

Madaya Mom can be read for free at http://abcnews.go.com/International/deepdive/madaya-mom-mother-struggle-survival-syria-civil-war-42362213.