Despite a somewhat wobbly start, the first Rebels trade collection is a welcome addition to this correspondent’s war comics library, and features engaging writing, dynamic art, and masterful coloring. 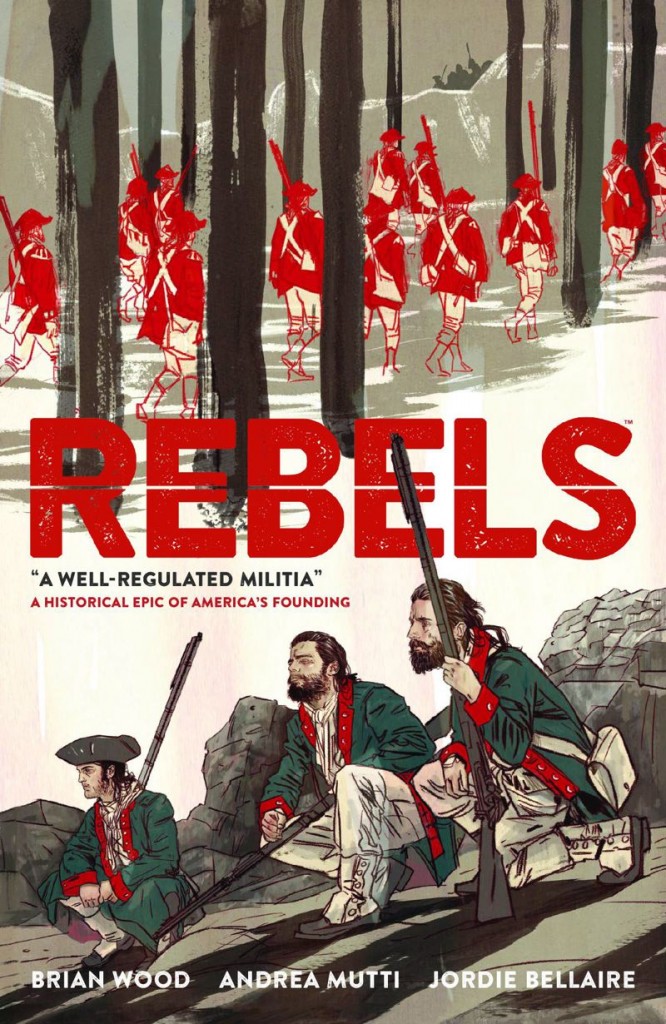 Brian Wood, Andrea Mutti, and Jordie Bellaire’s Rebels (Dark Horse Comics) stands out in a genre typically dominated by stories set during World War II. Ranging in time from 1750 to 1802, the stories in the first trade collection focus not only on the American War for Independence itself, but colonial frontier life, and the preludes to and aftermath of the war. The trade collects the first ten issues of Rebels and includes an introduction and three postscripts by Woods, as well as character sketches and a look behind the scenes of the artwork by Mutti. Excluding back matter the collection comes in at 246 pages, making it a good, thick read that’s nicely priced at US$24.99.

Brian Wood’s (The Massive, DMZ, Northlanders) interest in and knowledge of his subject is obvious from the first issue of the series, but he is definitely still finding his story in the book’s first chapter (issues 1 – 5), “A Well Regulated Militia.” His introduction and development of the character of Seth Abbott is brilliantly done, but Abbott’s revolutionary cant tends to read like memorized platitudes that have bene imposed on the character rather than growing naturally from who he is. Indeed, in the following chapters (issues 6 – 10), Abbott appears only as a recurring secondary character, a role to which he is perfectly suited, and which his established presence in both Northern and Southern campaigns allows him to serve as an excellent viewpoint character as Rebels becomes an issue-based anthology series.

This is where Wood really finds his stride as each of the final 5 collected issues tells a separate story, jumping in place and time to provide an intimate focus on some of the less well known facets of the War for Independence. The Molly Pitcher legend, and the reality behind it, is the focus of “Goodwife, Follower, Patriot, Republican,” and Wood continues to examine the mostly unheralded role played by women throughout the book. In the final part of “A Well Regulated Militia,” and in “Occupation,” the role of slavery in the war is raised, as is the question of which side is truly offering liberty for the enslaved. In the collection’s final chapter, the reader gets a look into the life of a British Army conscript from the streets of London to the battlefield of Kings Mountain, while “Stone Hoof” takes the reader back to the French and Indian War (1754 – 1763) where the seed of the War of Independence, and of future US relations with Native Americans, were so unwittingly laid. Wood seems to be introducing a collection of recurring characters and setting up multiple ongoing stories. At least, that is what this correspondent hopes he is doing, because those who survive their first appearances all have tales worth telling. If it took five issues for Wood to find he feet the next five make it worth it, and one hopes that he will run long and far from this point on. 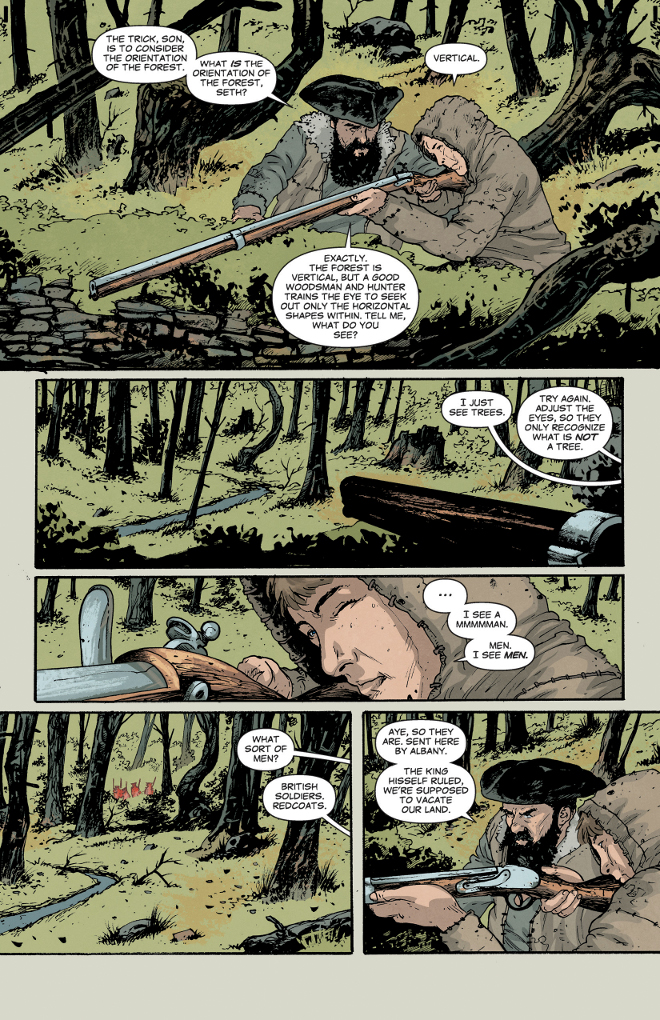 Andrea Mutti’s (DMZ, The Girl with the Dragon Tattoo, George Romero’s Empire of the Dead Part 3) art, on the other hand, hits the ground running from issue #1. His style is a beautiful mix of realism and impressionism, giving him the ability to make things move when he needs them to, even violently, and to give the reader the still quiet of late-night Lake Champlain when that’s needed instead. Regular readers of C’est la Guerre will be unsurprised at this correspondents delight in Mutti’s fearless use of blacks and shadows, but he also has that rare talent of blending them with sharp crisp lines, drawing the reader’s eye to what it need to see, and Wood wisely and regularly gives him multiple, wordless pages in which he unfailingly shines. Mutti brings the grit and grime and the toil and terror and the joy and beauty to the page, and his sense of movement and the chaos of battle make him one of the finest war comic artists drawing today.  Mutti is spelled in his penciling duties in chapters 2, 3, and 6 by Matthew Woodson (Northlanders, Flight), Ariela Kristantina (Deep State, Insexts), and Tristan Jones (Mad Max: Furiosa, Silent Hill) respectively. While each has a different style, each complements and harmonizes with the general tone set by Mutti, perhaps particularly Kristantina with her bold, slightly lose lines, fell blacks and sense of violent movement. 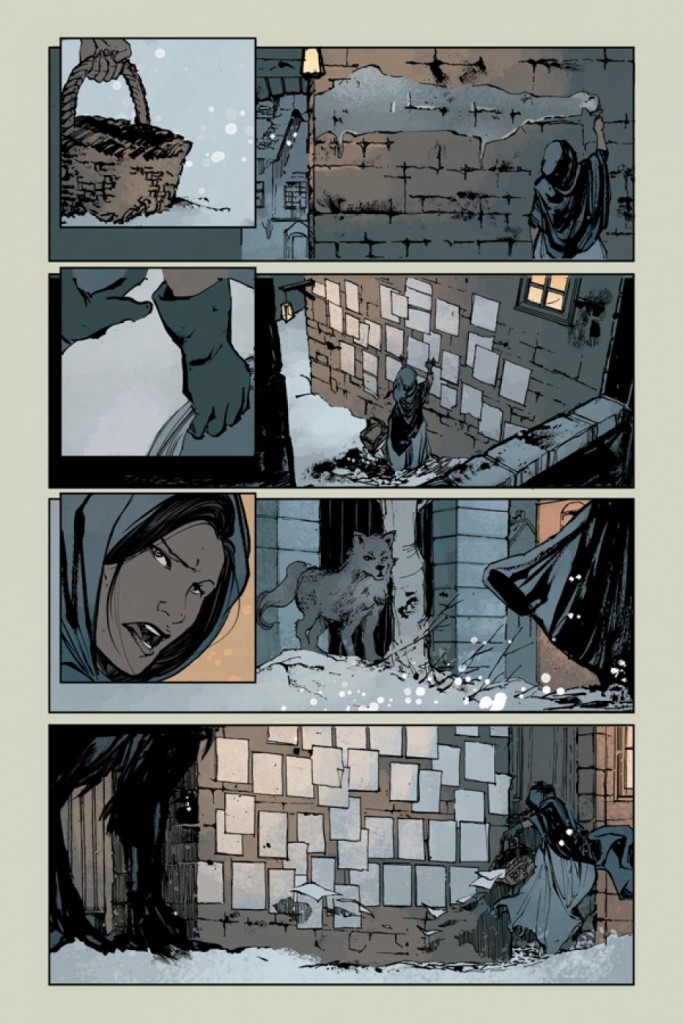 Finally, one cannot talk about Rebels without the beautiful colors of Jordie Bellaire (Pretty Deadly, The Massive, Cluster). Bellaire lights with the artistry of a master cinematographer, instantly indicating, time of day, season of the year, and the moment’s mood. Her colors roughen the textiles and skins of the characters, sweep fires and explosions across pages in roaring conflagrations, and fill the world with the smoke of gunpowder and ash. One of the most striking examples of Bellaire’s talent lies in her use of greens throughout, with subtle shadings of emerald, forest, and olive moving the story through time and space, while her light blue-grays and whites bring the Vermont winter crackling off the page. Bellaire’s colors provide the sinews of the story, and allow for nearly seamless changes in pencillers. She really does knit the book together, and once again proves that anything she does is worth a look.

Despite a somewhat wobbly start, the first Rebels trade collection is a welcome addition to this correspondent’s war comics library, and features engaging writing, dynamic art, and masterful coloring. Here’s hoping Rebels’ run will be long one.