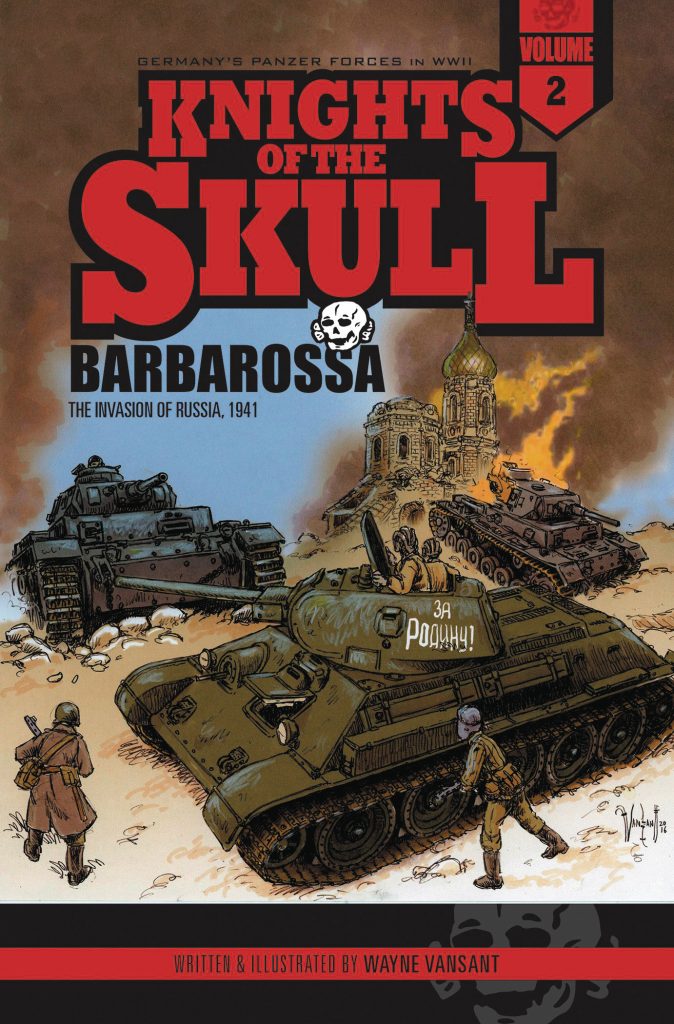 Knights of the Skull: Barbarossa. Cover by Wayne Vansant.

Wayne Vansant’s Knights of the Skull volumes 1 (Blitzkrieg) & 2 (Barbarossa) are young adult graphic histories tracing the development of the Wehrmacht’s armored units, with particular focus on the evolution of German tank design. Judging by the series title, the books are a kind of continuation of Vansant’s 2014 black and white collection Knights of the Skull: Tales of the Waffen SS. The first two volumes in the new series are full-color, and cover German tank development from the end of World War I to the start of the Soviet counteroffensive around Moscow in December 1941. Vansant is returning to familiar territory here. In a career spanning over 30 years, he has produced several excellent graphic histories in the war comics genre, including Days of Darkness, Days of Wrath, The Battle of the Bulge, and Normandy to name a very few.

In the inter-war years, Germany was the only nation to undertake a sustained program to develop both tank technology and both tactical and strategic armored warfare doctrines. While advocates of tank warfare existed in almost every nation that had participated in World War I (George Patton in the US, B.H. Liddell Heart and J.F.C. Fuller in Britain, Mikhail Tukhachevsky in the USSR) but they were largely ignored by the existing military establishments in their own countries (Tukhachevsky had actually made significant progress in Soviet doctrine and armored theory as the Red Army’s chief of staff, but his policies were discredited and discarded after he was executed during Stalin’s military purges during the late 1930s). Heinz Guderian, on the other hand, was extraordinarily successful not only in the development of doctrine, but also in convincing the German high command to support his work. Hitler himself was immediately taken with the panzers and theories of mechanized warfare when he came to power in 1933, and threw his full support behind the creation of the panzer forces.

Vansant traces this history briefly in volume I of Knights of the Skull, using the careers and military exploits of historical figures like Guderian, Erwin Rommel, Hans von Luck, Franz Bake, Kurt Knispel, and Michael Wittmann to anchor the narrative and give the story specific human faces. However, Vansant is often more sharply focused on the technological development of the tanks themselves, which while allowing him to give full reign to his undoubted expertise with historically accurate portrayals of tanks and armored vehicles. The art throughout is detailed and accurate, but the books definitely fall more into the illustrated history category rather than true sequential art, as the illustrations are mostly there to support the text, with each panel often depicting scenes hundreds of miles and/or weeks apart. Vansant covers a great deal very accurately, while keeping the story moving and maintaining the very real tension and drama of events. The work is informative, well-paced, and gripping. There are also occasional interludes between chapters where Vansant takes a page or two to compare German and allied tanks, or to detail the brutal treatment of prisoners by both sides on the Russian front. These breaks remind me pleasantly of the similar splash pages and two-page spreads that were a regular feature of DC’s classic war comics. Moreover, the author provides detailed maps for each campaign, showing lines of advance and retreat to help locate the reader in time and space. He is also to be applauded for revealing that the campaigns in Czechoslovakia, Poland, and France, while victorious for the Wehrmacht and certainly vindications of Guderian’s theories, were not really the walk-overs they are generally assumed to have been. Vansant’s panzertruppen are highly trained, highly motivated, but also facing a steep learning curve as they translate training and theory to the realities of the battlefield. 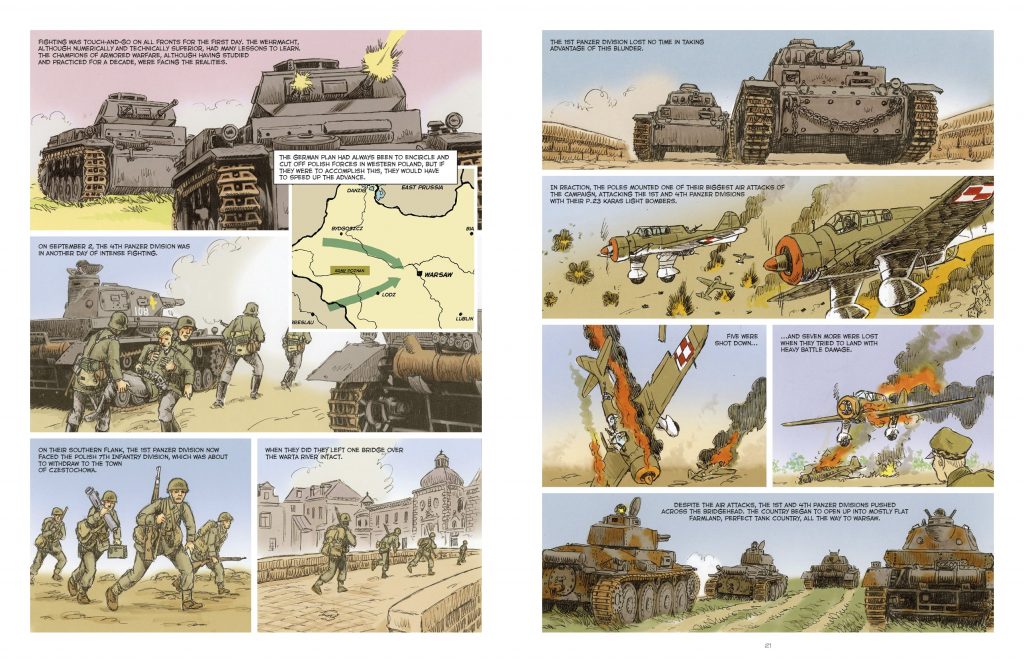 Knights of the Skull: Blitzkrieg pp. 20-21, story and art by Wayne Vansant.

As for the books themselves, Schiffer Publishing has produced nice, magazine-sized paperback editions that give Vansant’s art and subject matter the room it deserves. Unfortunately, the publisher’s editorial department drops the ball here and there, letting several misspellings and subject-verb disagreements slip through the cracks. Admittedly, this is a pet peeve of mine, but it really does seem that publishers and editors are paying less and less attention to spelling and grammar, leading to some unnecessary breaks in the flow of the narrative.

Overall however, Knights of the Skull provides an excellent, accessible overview of its historical subject, and doesn’t shy away from depicting some of the war crimes committed in the East. That having been said, this history is – so far (and unlike the original Knights of the Skull collection) – aimed at a younger, early to-mid teen audience and is therefore rather bloodless, making no attempt to depict the grim realities of the war, or to address atrocities committed by the panzer troops themselves, or the Wehrmacht’s collusion and cooperation in the Nazi’s genocidal programs in eastern Europe. In fact, Guderian and his colleagues are perhaps a bit too much the “good Germans.” This time-honored war comics formula of cool vehicles and military genius largely divorced from ideology feels old-fashioned, and not in a good way. These people were not Good Guys, and every single one of them swore loyalty to Adolf Hitler. Not the rule of law, or Germany, or even to the Nazi Party, but to Adolf Hitler personally, and then they were essential in perpetrating the most horrific conflict in human history. Leaving all of that out isn’t historical objectivism, it’s historical amnesia, and in case you haven’t noticed, that’s a really bad idea.