The Forever War starts strong, and does an incredible job of foregrounding the all too human soldiers who find themselves part of a military and on a front line that are both markedly different and horribly similar to those which have come before. 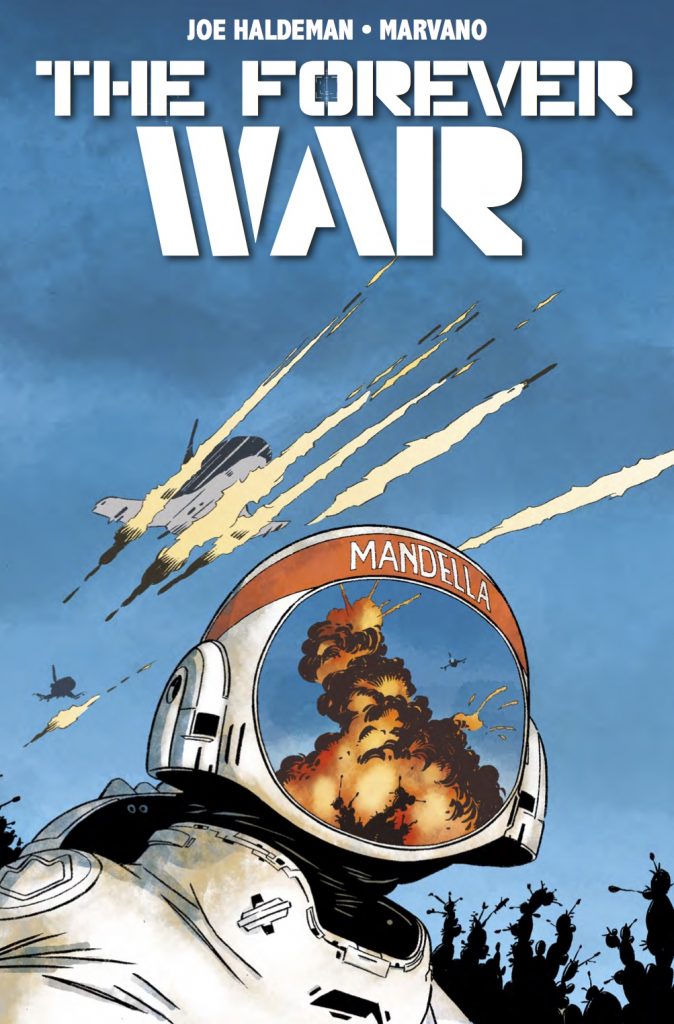 This week Titian Comics launches The Forever War, written by Joe Haldeman and with art by Marvano. An adaptation of Haldeman’s famous novel, The Forever War is actually a reissue of a series produced in Europe in 1988-89 in both Dutch and French editions. The books were then collected into a three-volume English translation for the American market by NBM Publishing in 1990. Since that time, it has been possible to find copies of volumes 1 and 3 of the English translation fairly easily and at reasonable prices. Volume 2, however, is significantly harder to find and is usually much more expensive, making the complete set something of a rarity. So I was very excited to hear that Titan had acquired the rights to The Forever War in 2016, especially since the publisher has does such a spectacular job with reprinting other hard to find European comics (the Battle Pictures Weekly strips in particular).

This book also marks something of a departure for “C’est la Guerre.” This space is usually reserved for war comics with a historical setting, but Haldeman’s novel is something of a foundational text in modern military SF, and springs directly from his experiences as a combat engineer in Vietnam 1967-68 where he received the Purple Heart for being wounded in action. The Forever War (novel) brought a much more nuanced and realistic portrayal of the realities of combat and military life to American fiction, and also served as a kind of counterpoint to Robert A. Heinlein’s Starship Troopers which depicted a futuristic, semi-fascist society that elevated soldiers and somewhat glorified combat. It is not an exaggeration to say that anyone creating military fiction after 1974 – in any media – has been influenced by Haldeman’s work, so it seems appropriate to cover the comic adaptation here.

Also, I am a huge fan of the novel, and so just couldn’t resist. 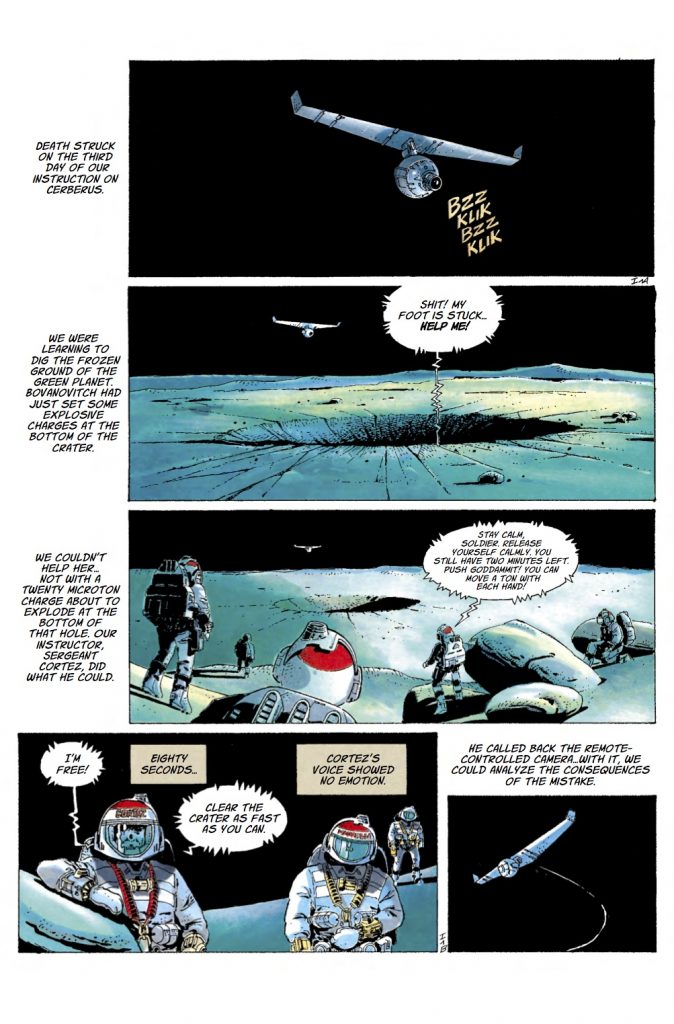 Issue 1 opens with the protagonist, William Mandela, training with his unit on Cerberus, which appears to be standing in for Pluto’s moon Charon (although in 2011, a new moon was discovered in Pluto’s orbit, and actually named Cerberus). Drawn in the ligne claire style for which Marvano would become known, The Forever War holds nothing back, with the first death occurring on page one. Indeed, much of the book is devoted to the whittling down of Mandela’s platoon as they learn how to live and fight in space, where a moment’s inattention can kill you. The reader also gets some brief exposition that sets the scene and the reasons behind humanity’s war with the mysterious “Taurans.” Basically, there is only one known way to cheat physics and cross vast interstellar distances in a reasonable time frame: collapsars, black holes that allow a ship to pass instantaneously between two widely separated systems. Both humans and Taurans want exclusive access to the known collapsars, and neither is particularly willing to try and find a way to share them. Because living in space requires a high degree of technical knowledge and scientific education, the first issue draws the reader into a universe where the best and brightest young men and women on Earth have become high-tech grunts in a conflict where the surrounding environment is perhaps even deadlier than the enemy, and where every death is the loss of an actual genius-level intellect. 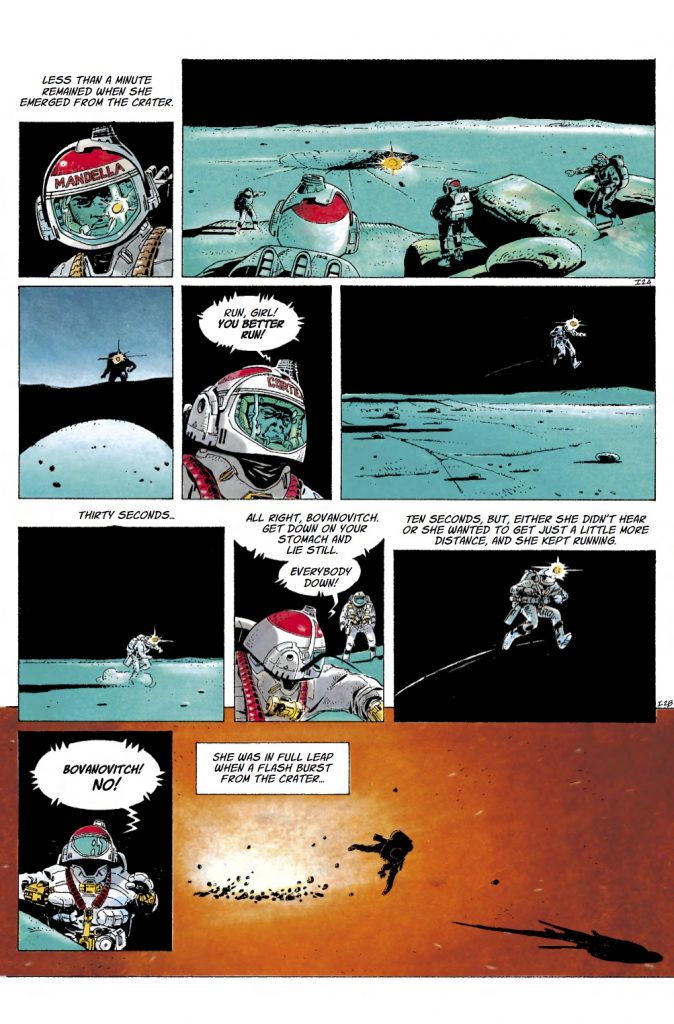 Marvano’s art is perfectly suited to the subject matter, with clear, hard lines and deep, solid blacks. The faces of his characters are heavy, and shy away from the incessant beauty all too often seen in American comics drawn in a realistic fashion. In a setting where sunlight is often unfiltered by atmosphere, or the interior lighting is usually bright and white, the Marvano’s strong ink strokes help create a deep sense of realism. For the most part the art has aged well, with the notable exception of the use of space shuttles as the primary means of transport from planet to orbit and vice versa. As the comic was produced during the height of NASA’s shuttle program, this probably lent an air of near-future realism to the work at the time, but today comes off as a bit dated. Yet the science behind Haldeman’s world is based firmly on fact, and physics and the theory of relativity apply to the ships and people on them, making the author’s more speculative leaps and technologies feel far more realistic than they otherwise might. The Forever War starts strong, and does an incredible job of foregrounding the all too human soldiers who find themselves part of a military and on a front line that are both markedly different and horribly similar to all those which have come before. 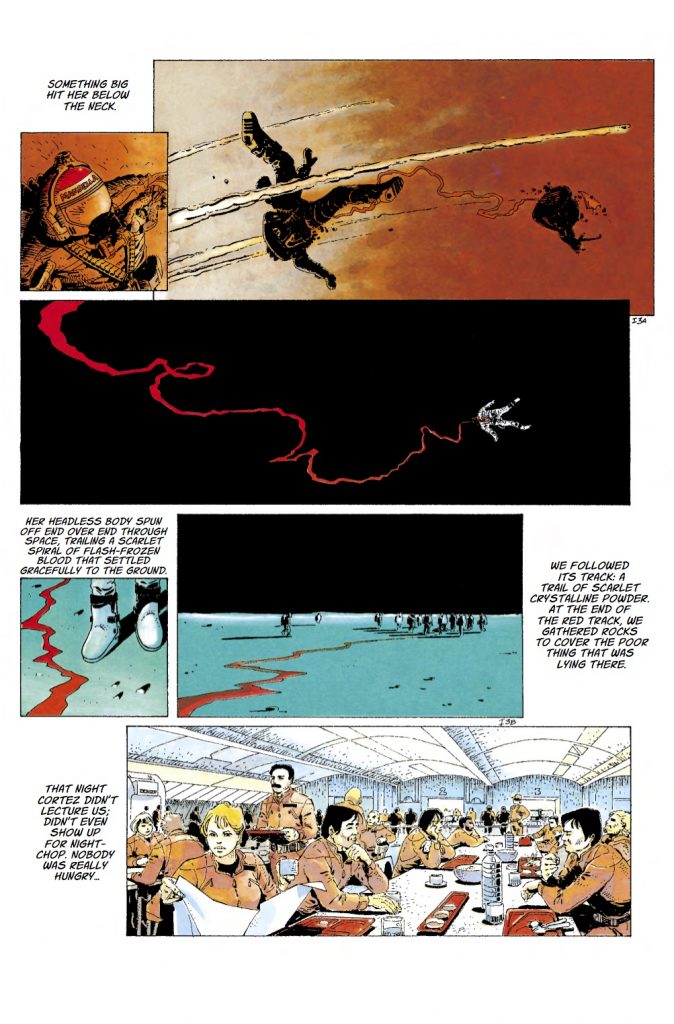