Aaron, Stewart, and McCaig’s The Other Side delivers a strange and terrible beauty where the heat, humidity, fever, stench, and mania of the Vietnam War is palpable. If you don’t already own this one, you should. 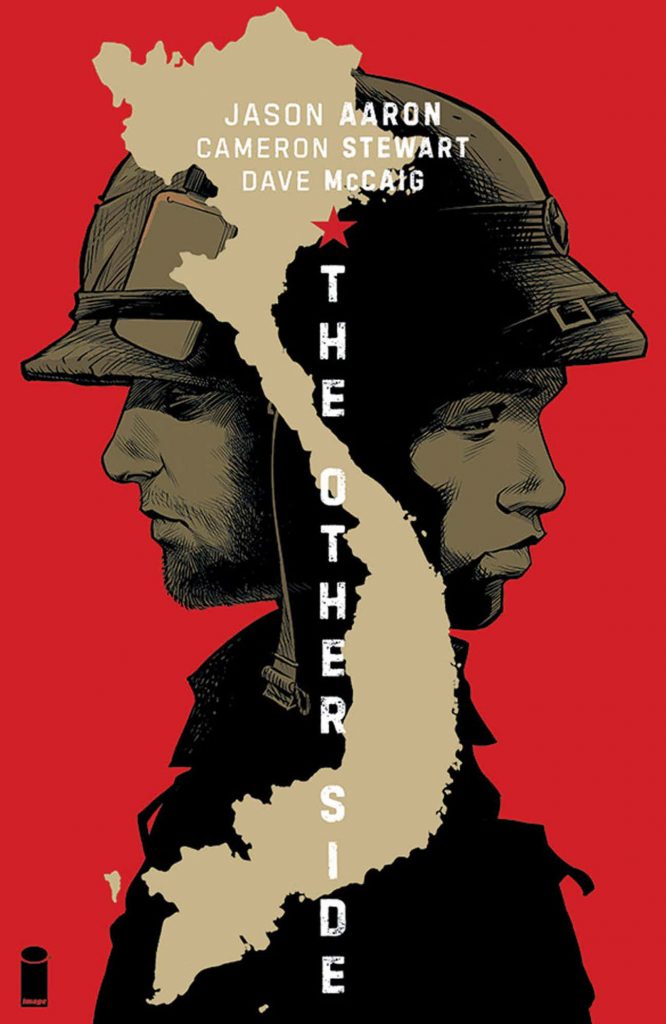 The Other Side Special Edition. Cover art by Cameron Stewart.

The Other Side, written by Jason Aaron with drawings by Cameron Stewart and colors by Dave McCaig, recently received the deluxe edition treatment with a hardcover collected edition from Image Comics of the Eisner-nominated 2006 Vertigo mini-series. Marking 50 years since the American war in Vietnam reached its peak in terms of US troops committed, 2017 has seen the release of numerous new histories of the American phase of the Vietnam War, the release of Ken Burns and Lynn Novick’s documentary series The Vietnam War, and a concurrent renewed scholarly and public interest in the conflict, so Image’s reissue of this excellent series is very well-timed. 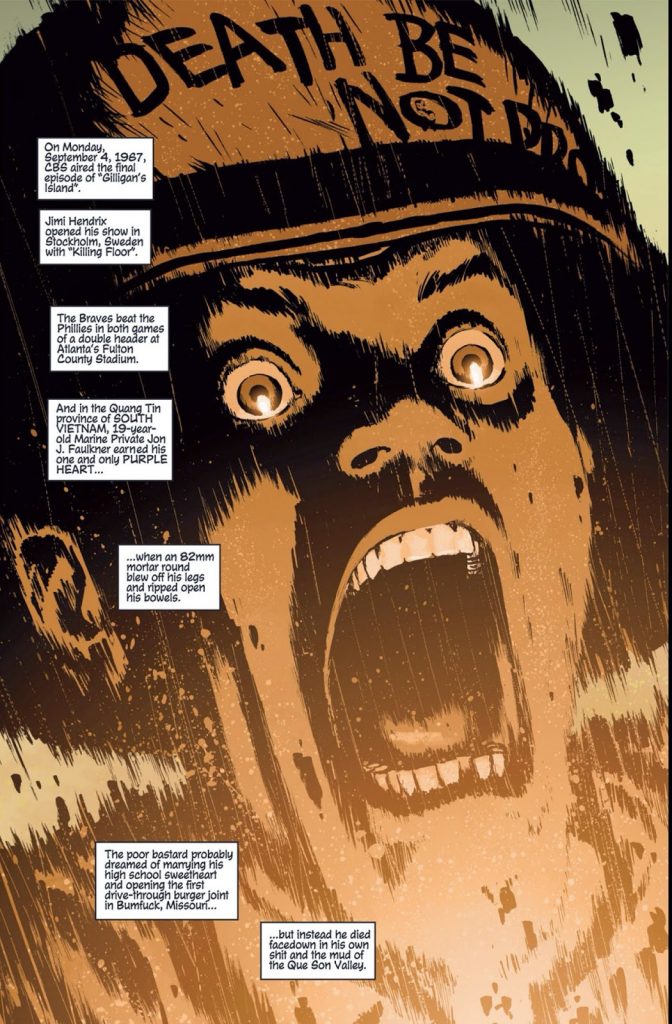 The Other Side p. 1. Script by Jason Aaron, art by Cameron Stewart.

The story follows the journeys of 19 year-old Marine PFC Bill Everette and People’s Army of North Vietnam (PAVN) recruit Vo Binh Dai, tracing roughly a year in their lives through brilliantly executed parallel storytelling. Aaron has claimed that The Other Side represents the hardest work he has ever put into a book, and he credits the work with launching his subsequent career in comics. Cameron Stewart also put a great deal of effort into the work, including a research trip to Vietnam, and the new edition includes excerpts from his e-mails home, as well as numerous photographs from the trip. One of the latter particularly struck me: it shows Stewart, a skinny young man either emerging from or lowering himself into the opening of a tunnel system used by PAVN and Viet Cong troops during the war. The opening appears to be only an inch or less wider than Stewart’s ribcage, and the reader can easily draw a line from that particular tour to the claustrophobic scenes of Vo’s own time in the tunnels in the comic. 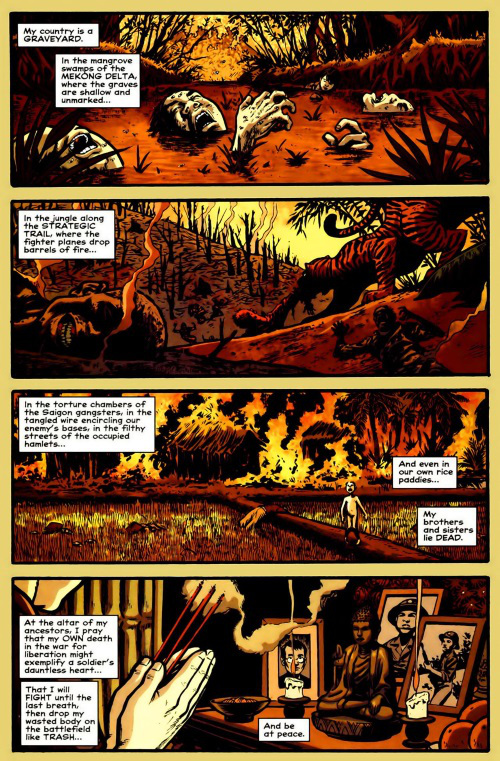 The Other Side. Aaron & Stewart.

Aaron and Stewart don’t shy away from the war’s brutality, horror, and – for Everette at least – pointlessness. Even more striking, however, is their choice to underline the madness of the war, both literally and figuratively, for Everette is truly mentally ill, suffering from visual and auditory hallucinations even before he leaves Boot Camp, and despite his honestly about his condition, the Marine doctors, Chaplin, and even his platoon sergeant in Vietnam are utterly unconcerned and uncaring. So long as he can keep it together enough to do his job in the field, no one really cares if he goes truly insane. Nor does Vo escape the madness as he and his comrades march down Route 559 (the Ho Chi Minh Trail), progressively falling victim to hunger, thirst, heat stroke, malaria, and other fevers, he too leaves reality behind for a world in which B-52 spilling thousands of pounds of explosives from their bellies become mythical dragons, and the American enemy monsters from legend. It is this kind of portrayal of mental and emotional stress and horror that sets The Other Side apart from most war comics with a Vietnam focus, and gives the book a visceral horror that very effectively reaches out and grabs the reader. 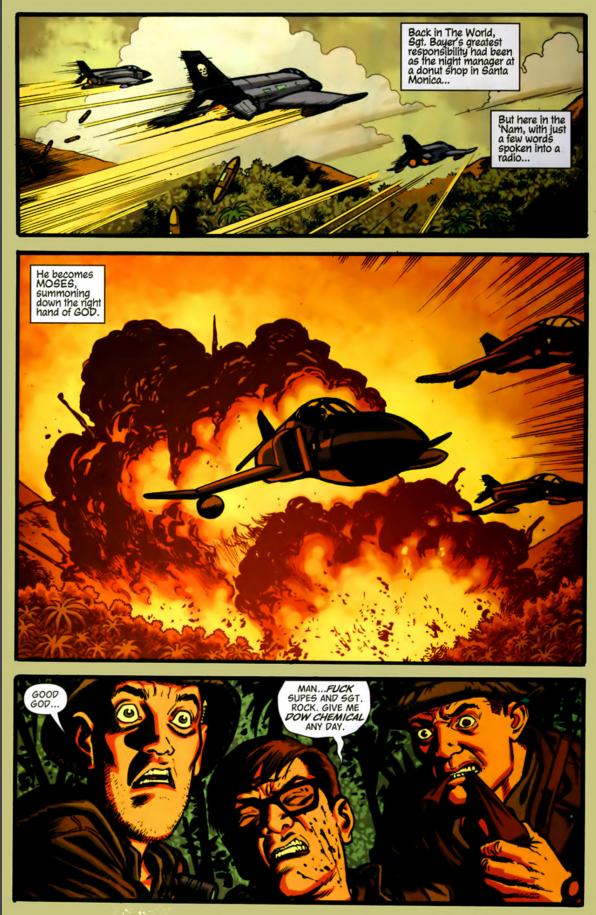 Stewart’s artwork is perfectly suited to the story, and artist, writer, and colorist work together seamlessly to tell their tale of two kids who are ultimately little more that meat in an industrial grinder that controls their very lives and doesn’t care about either of them. This feeling of a lack of agency in the face of a seemingly inevitable and unavoidable progression towards madness and death pervades Aaron and Stewart’s book, and Stewart’s cartoony-realism combined with his use of deep blacks and a moody palette brilliantly used by McCaig bring a strange and terrible beauty to the entire book where the heat, humidity, fever, stench, and mania of the war and the land are palpable. This is one of those comics that really is important, and Image’s well-made hardback edition does it justice. The Other Side is available from your local comic shop or Amazon, and, if you don’t already own this one, you should.